Andrew Fisher was the most successful of Australia’s early Labor prime ministers – because he won so many elections. His government started the Commonwealth Bank and introduced invalid pensions.

The First World War broke out only a month before he began his third term in office. His government raised the First Australian Imperial Force (AIF) and sent Australian soldiers to fight in Gallipoli, the Middle East and the Western Front in Europe.

It was Fisher who vowed to defend the ‘Mother Country’ to the last shilling.

Andrew Fisher was born on 29 August 1862 in Crosshouse, Ayrshire, Scotland. He was one of seven children of Robert Fisher and Jane Garvin. His father was a coalminer who, with nine other men, established a cooperative store in 1863.

After some primary schooling, Fisher educated himself through reading many books in the library of the cooperative his father helped to establish. He also attended night school.

Fisher began working at the age of 10 in the Crosshouse coalmines. At 17 he was elected secretary of the local branch of the Ayrshire Miners’ Union.

He migrated to Queensland with his younger brother in 1885, where he worked in various coal and gold mines and obtained his engine driver’s certificate. He eventually settled at Gympie, where in 1891 he became the president of the Amalgamated Miners’ Association and of the Workers’ Political Organisation, which was the local branch of the Labor Party.

Fisher entered the Queensland Legislative Assembly after election as Labor candidate for the seat of Gympie in April 1893. He lost the seat in March 1896 but regained it in March 1899. He was Minister for Railways and Public Works from 1 to 7 December 1899 in Andrew (Anderson) Dawson’s short-lived Labor government (the world’s first Labor government).

Fisher married Margaret Irvine in 1901, and they had six children.

Fisher was elected as Labor candidate for the seat of Wide Bay, Queensland, at the first federal general election on 29 March 1901. He retained the seat through the next five general elections until resigning from Parliament.

Fisher successfully moved an amendment to Alfred Deakin’s Conciliation and Arbitration Bill in April 1904 to include state employees under the legislation.

Labor caucus elected Fisher as Deputy Leader of the parliamentary Labor Party in August 1905. He retained this position until October 1907 and was then elected to replace Watson as Leader

Fisher became Prime Minister on 13 November 1908 when Deakin’s Protectionist government resigned and Fisher was commissioned to form a government. (Deakin resigned because he felt Labor’s ‘preference for unionists’ amendment to its arbitration legislation was unacceptable.)

Fisher lost office for the first time on 2 June 1909 after his government was defeated in parliament by Deakin’s and Joseph Cook’s Fusion group. Fisher sought dissolution of Parliament and resigned when the Governor-General (Lord Dudley) refused it.

Fisher became Prime Minister for the second time following Labor’s success at the fourth federal general election in 13 April 1910, where it won 43 of the 75 House of Representatives seats. Labor gained a clear majority in the Senate as well (with 23 of 36 seats). Labor held office for a full term of parliament, and engaged in an active legislative program.

Among Labor’s major innovations were the establishment of the Commonwealth Bank, the introduction of maternity allowances, workers’ compensation for Commonwealth employees, implementation of recommendations of the royal commission on the sugar industry (laying foundations for the industry’s future development), liberalisation of invalid and old age pensions, expansion of the High Court (from five to seven judges), transfer of the Northern Territory to the Commonwealth, and the decision to establish a federal capital at Canberra.

In 1911 Fisher attended the Imperial Conference in London where, as the only Labor Prime Minister present, he attracted interest. Like Deakin before him, he argued for dominions to be consulted over UK foreign policy. On returning to Scotland and his Crosshouse birthplace, he was welcomed as a hero.

Fisher took office as Prime Minister for the third time on 17 September 1914 after leading Labor to a decisive victory at the sixth federal general election on 5 September 1915.

During the election campaign, as war between UK’s allies and the Axis powers became more likely, Fisher promised that if war broke out Australia would support UK ‘to the last man and last shilling’. By the time he had taken office, the Empire (including Australia) had been at war for six weeks.

Fisher retained the prime ministership until 27 October 1915, when he resigned because of ill health. He was succeeded by his deputy, William Morris Hughes.

After resigning the prime ministership, Fisher was appointed High Commissioner to UK, after George Reid, in January 1916. He retained the position for five years until retiring in January 1921.

While High Commissioner he served as a member of the Dardanelles Commission, and during the conscription controversy of 1916 he refused Hughes’ request to sign a public statement supporting compulsory military service.

After his return to Australia in 1921 supporters tried to secure Fisher a seat in federal parliament and to return him to Labor leadership, but he was not really interested.

He returned to London in 1922 and unsuccessfully sought Labour preselection for a Scottish seat in the House of Commons. Fisher lived in retirement in London until his death there on 22 October 1928. 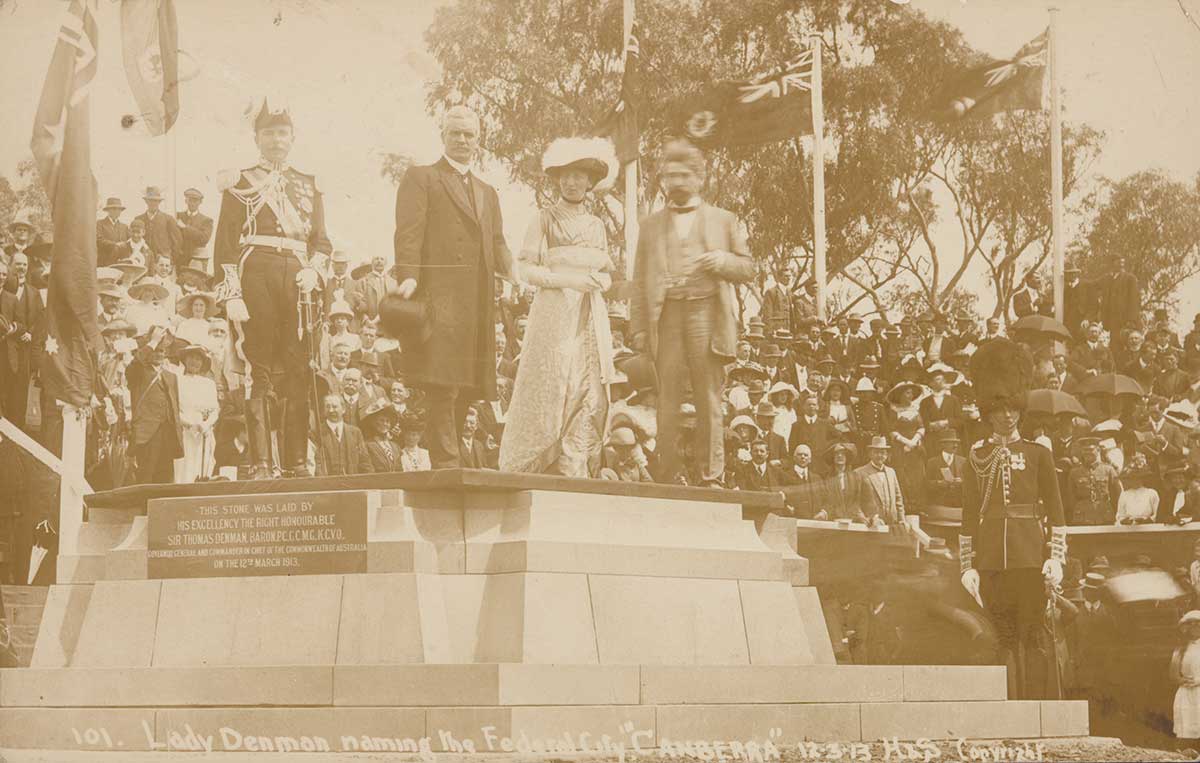 Governor-General Lord Denman and Lady Denman, Minister for Home Affairs King O'Malley and Prime Minister Andrew Fisher at the official ceremony on Capital Hill to mark the commencement of work on Canberra

Fisher was Prime Minister for the whole of the Fourth Parliament (1910–13). One hundred and thirteen bills were enacted. The most important were:

The last man: the making of Andrew Fisher and the Australian Labor Party