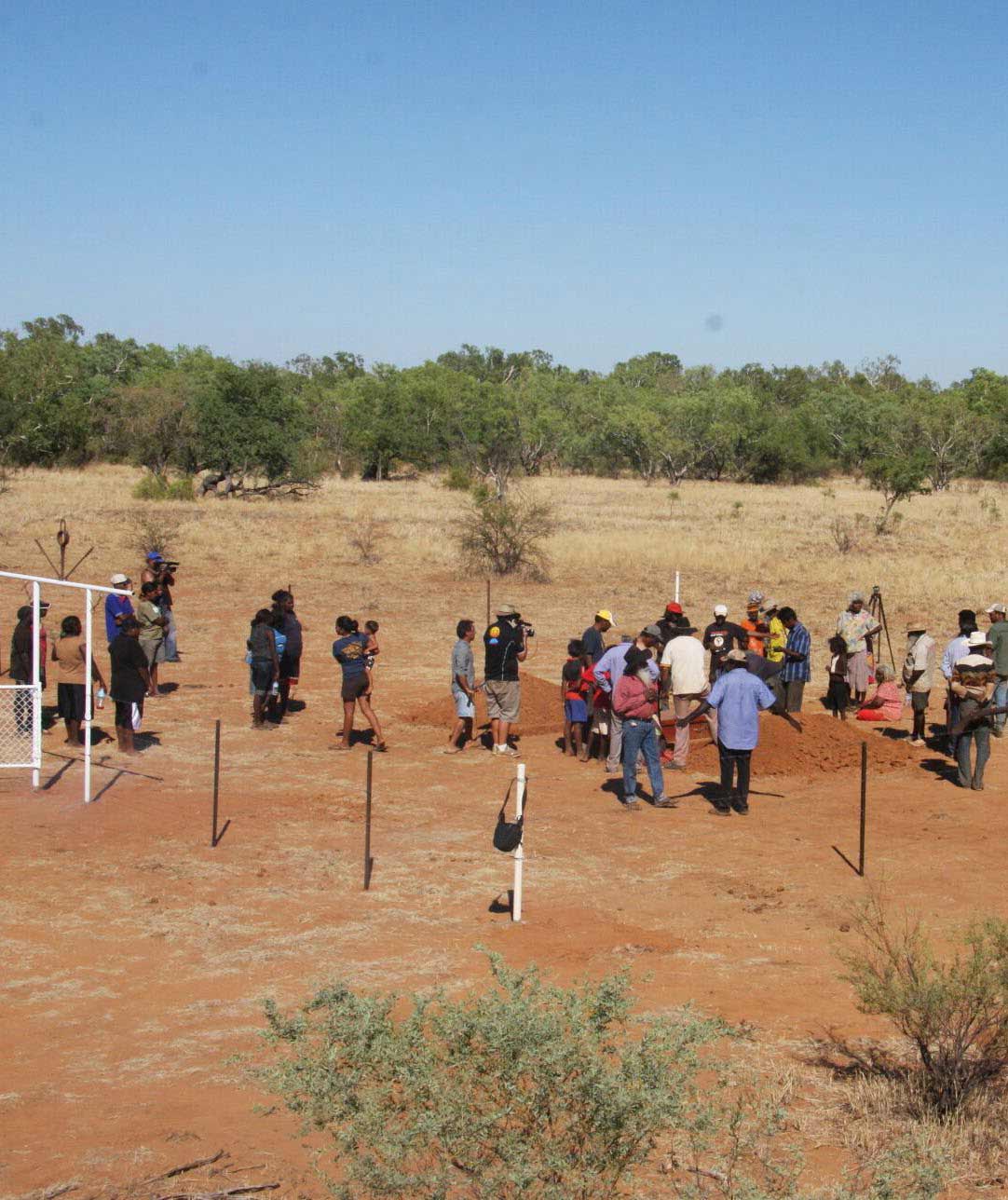 While nothing prevents concerned individuals from making enquiries or claims for repatriation directly from holding institutions, any engagement will get a better hearing if the institution is convinced that the applicant formally represents a community, and that any engagement with that person will not invite dispute with the majority of members of that community. For this reason, a decision to pursue a repatriation request should follow comprehensive community consultation and endorsement. Correspondence may then, implicitly or explicitly, assert a recognised cultural right to make a claim for information or repatriation.

No Australian legislation prohibits Aboriginal or Torres Strait Islander people from making a request for repatriation from either Australian or overseas institutions. Similarly, no Australian law prohibits Indigenous people from taking direct receipt of Ancestral Remains to which they are affiliated. This is important in cases where Australian agencies try to assert that they are the only ones permitted to make such claims, or when an agency is not acting fast enough in making applications or representations to institutions.

How to build a claim: key elements

The first step is to understand a museum’s preferred claims procedures. The more support information that accompanies the initial claim the better. While many of the institutions to be approached may have national and international reputations as institutions of great standing, this does not mean their staff are fully aware of the cultural details and significance of all their holdings, or of the repatriation debate in general. The question of repatriation and Indigenous rights in countries other than their own may never have been an issue for the museum. This means that the museum workers receiving the claim may be hesitant or uncertain about how to respond or even how to frame their response. They may have a minimal knowledge, if any, of the cultures and histories of the people making the application. For these reasons, it is important to provide the museum’s staff with as much supporting information as possible, to better inform them of the peoples and culture making the claim, as well as any other relevant administrative information.

It is also important that all correspondence be courteous and polite. Much resistance from individuals asked about repatriation arises from caution based on limited knowledge of repatriation and sometimes the strong language used in applications.

As a guide, information provided to holding institutions could include:

Be aware of museum policies, protocols and practices

Being informed about museum policies and protocols helps in understanding the constraints imposed on the people you will be consulting with. Even the most pro-repatriation curator still has to work in accordance with their employer’s rules.

Wherever possible, look at the museum’s policies and/or protocols regarding both human Ancestral Remains in general and Indigenous human Ancestral Remains in particular. Sometimes these are readily available through a website search. At other times, it might require a request for information directly to the institution. Check to see whether other claims have been made to the institution and what the outcomes were. This may be obtainable by looking for media articles, and by checking the museum’s website.

Most reputable museums are affiliated with larger internationally recognised professional bodies. The International Council of Museums (ICOM), for example, has ethical guidelines that it expects member institutions and individuals to follow, including:

Requests for removal from public display of human remains or material of sacred significance from the originating communities must be addressed expeditiously with respect and sensitivity. Requests for the return of such material should be addressed similarly. Museum policies should clearly define the process for responding to such requests.38

The United Nations Declaration on the Rights of Indigenous Peoples also states:

2. States shall seek to enable the access and/or repatriation of ceremonial objects and human remains in their possession through fair, transparent and effective mechanisms developed in conjunction with indigenous peoples concerned.39

Many of these statements are guidelines only, and so not necessarily binding on governments or institutions. They do, however, remind museums that there are issues with which they should engage.

It is also useful to check out a museum’s media profile. Some organisations do not have online policies or guidelines, but may have returned Ancestral Remains upon request. These returns often get a mention in local news. A history of returns means that the institution may be prepared to accept further approaches for information or repatriation. A search for the name of the institution (plus ‘repatriation’, ‘return’ or ‘human remains’) is a good place to start. For example, the Charité — Universitätsmedizin Berlin in Germany is a large medical university. It is not a formal collecting institution like a museum. A website search on ‘Charité + repatriation’ brings up a number of reports on the Charité’s return of Indigenous Ancestral Remains to Namibia and Australia.

Establish the history of museum responses: seek advice from others who have gone before you

The Australian Government, through the Department of Communications and the Arts, has been actively engaged with a number of institutions in the United Kingdom, the United States and Canada, and in many countries across Europe, including Germany and France. Similarly, repatriation officers in Australian museums have been building relationships with their overseas colleagues, whenever possible, to continue the conversation and do their best to support and encourage repatriation.

An increasing number of Aboriginal and Torres Strait Islander repatriation advocates now have extensive, and often different, experience in all aspects of domestic and international repatriation.

These agencies and individuals can often provide a lot of information about what Ancestral Remains are held by institutions, what policies apply in each of the countries, what has been done in the past and who the appropriate contact people are.

There should be no issue with requests for the return of Ancestral Remains from within Australia, either from museums, other holding institutions or individuals. The Australian Government provides funding to the eight major state and territory museums to support domestic repatriation. The Australian Museums and Galleries Association (AMAGA), an industry group, also supports repatriation.

There are other agencies in Australia that may not be aware of the commitments of their overarching professional bodies, such as AMAGA, to repatriation. The full extent of collections of art galleries, for example, are largely unknown, but some are known to hold artefacts that incorporate the Ancestral Remains of non-Australian Indigenous people, or to hold secret/sacred objects in their collections as artworks. The National Gallery of Australia, for example, has recently displayed Ancestral Remains, including over-modelled skulls from Vanuatu and West Papua.

University archaeology and anatomy departments and medical schools have, on many occasions, identified Aboriginal and Torres Strait Islander Ancestral Remains in their holdings. In both 1985 and 2002 the University of Melbourne, for example, was found to have a number of Aboriginal Ancestral Remains in its Department of Anatomy. These were subsequently transferred to Museum Victoria for repatriation.

Museum repatriation officers still get enquiries from the general public regarding the appropriate way to handover Ancestral Remains.

In summary, there is no reason for Australian collecting institutions, including museums, art galleries and universities, not to return Ancestral Remains on request. Nevertheless, this doesn’t always happen.

As noted earlier, no laws prevent Australian Aboriginal and Torres Strait Islander people from approaching overseas institutions themselves. However, advice or assistance can be obtained from the International Repatriation Program of the Department of Communication and the Arts, or from major state and territory museums.40

Public museums and institutions, both in Australia and overseas, are usually subject to strict rules of behavior, following government rules of management and governance. Sometimes the implementation of these rules in regard to a repatriation inquiry might be seen as deliberate obstruction by the organisation or associated individual. Sometimes it is. More often, however, it is simply an instance of an employee heeding the requirement that they work under their organisation’s management and governance codes. No matter how sympathetic a government officer may be to a community’s request for information, they have to follow rules. Because of this, it is crucial to be fully aware of the mechanisms of museum governance that may affect a repatriation request.

Ancestral Remains are often considered ‘objects’ by collecting institutions, forming a part of their wider collections. This is often because policies and definitions have not been reviewed for decades, and older, outmoded concepts and definitions remain in place. Under such policies and protocols, Ancestral Remains are documented and stored. To avoid corruption, such as illegal trade in museum objects or unauthorised research, rules apply to the accessioning and deaccessioning of those Ancestral Remains. Deaccessioning is the act of formally removing an object from the official collection so that it can be disposed of, either by destruction or transfer to another party. Deaccessioning can be a time-consuming and complicated process. First, the organisation must agree to the deaccessioning. This usually requires a review by one or more panels of the museum’s experts and/or board or council. If approved, there is often a ‘cooling off period’, during which both the museum and the claimants have time to review and change their minds.

Many museums are very old, and have charters and governance frameworks to match. Sometimes these charters of establishment need to be changed to allow for deaccessioning and repatriation. This can also take time.

Many organisations do have their governance procedures and policies available on their websites. A search through the site can provide useful information of what behaviors the organisation will be expected to apply in any repatriation event. For example, the National Museum of Australia maintains an online policy register that includes the Aboriginal and Torres Strait Islander human remains policy, which details its repatriation processes as well as its management guidelines for the respectful treatment of Ancestral Remains.41