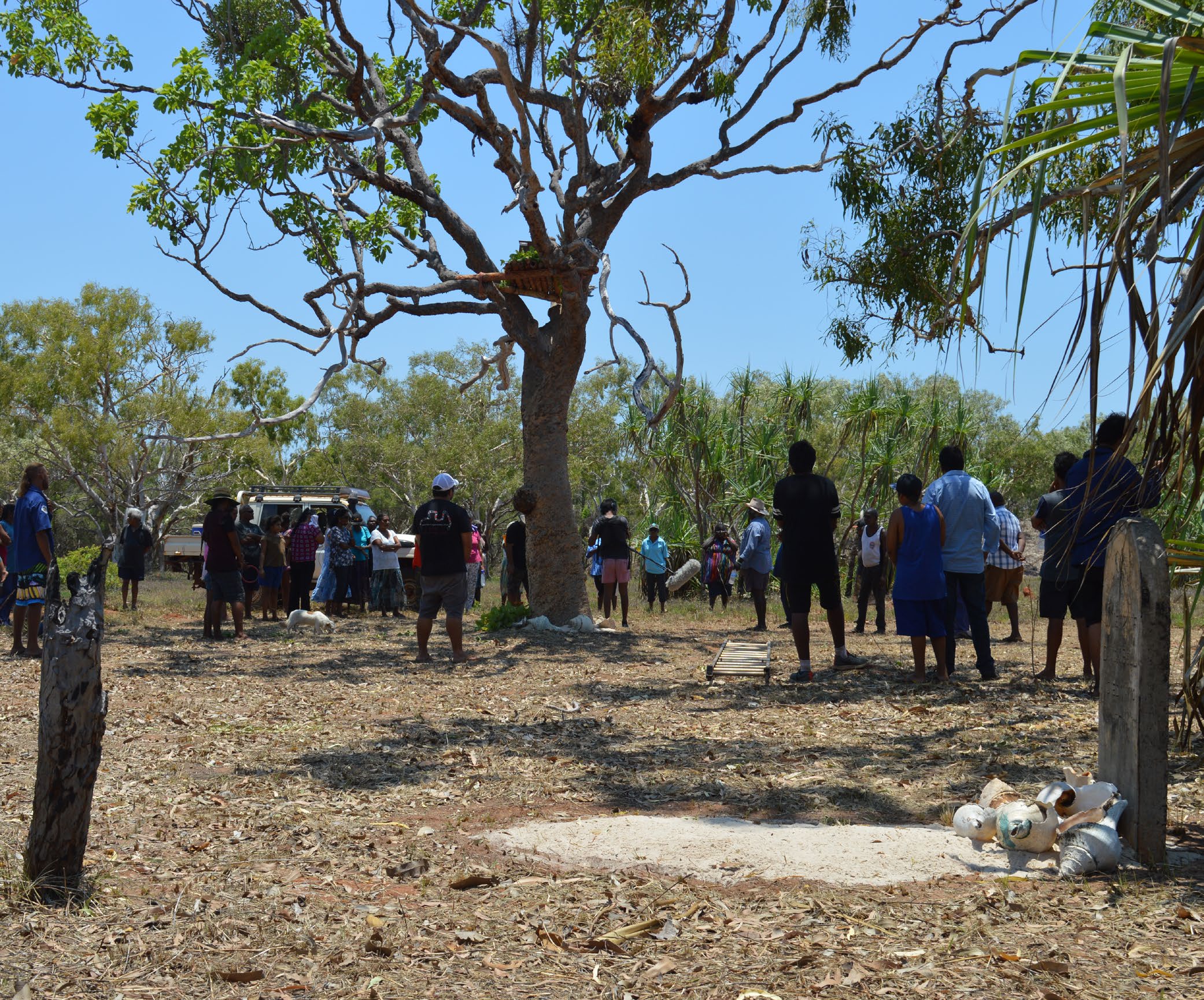 The stages involved in a typical museum-initiated repatriation exercise are discussed here, starting with definitions. Australia has the advantage that the questions of what characterises an Indigenous custodian, and what their rights are, have been repeatedly explored through rigorous judicial and research processes, with a more culturally aware focus taking precedence over a simplistic biological focus based solely on direct descent. Overseas museums, however, particularly those in countries without recognised indigenous populations, tend to lean more towards property-based definitions, or definitions based on more restricted concepts of cultural rights and interests.

Who is an Indigenous custodian?

An Indigenous custodian of Ancestral Remains is someone entitled by tradition to be the caretaker of those Ancestral Remains and of the activities involved in their final disposition. There is often some dispute between museums, particularly international ones, and communities over what criteria define a custodian. Some institutions impose strict rules of biological descent.

What is meant by ‘tradition’ here? Museums, and other agencies, have often applied very conservative notions of tradition. Indigenous people are expected to adhere to the earliest documented histories of their practices, to live in the past in order to be ‘authentic’. Such strict definition is incorrect. Common definitions of tradition do not apply this qualification, acknowledging that historical conceptions of tradition are secondary to cultural ones. Section 3 of the Aboriginal Land Rights (Northern Territory) Act 1976, for instance, defines ‘Aboriginal tradition’ thus:

the communal group or individual rights and interests of Aboriginal peoples or Torres Strait Islanders in relation to land or waters where:

(a) the rights and interests are possessed under the traditional laws acknowledged, and the traditional customs observed, by the Aboriginal peoples or Torres Strait Islanders; and

(b) the Aboriginal peoples or Torres Strait Islanders, by those laws and customs, have a connection with the land or waters; and

(c) the rights and interests are recognised by the common law of Australia ...31

In summary, ‘tradition’ is defined by the beliefs, customs and practices of the group. No definition imposes a time limit upon the concept of tradition, except that tradition is expected to be handed down from generation to generation. No definition prohibits change in traditions, or the emergence of ‘new’ traditions arising out of the operation of normal social processes. There is therefore little support for arguments based on the premise that, to be considered as having traditions, groups must conform to patterns, customs, values and beliefs of the distant past as captured and frozen in the historical literature.

The mechanisms of Aboriginal and Torres Strait Islander peoples’ affiliation to Country, and to Ancestral Remains that belong to that Country, are considerably complex. Some museums, particularly overseas institutions, have tried to impose strict criteria of demonstrable biological descent where applicants for a repatriation have been asked to prove they are biologically related to the Ancestral Remains under claim. This is not a reflection of traditional processes or culture.

Membership of a group is usually inherited through a direct genealogical connection, such as father/mother to child. This primary inheritance is strengthened by the individual satisfying other socially significant criteria that bestow affiliation, rights and authority, such as:

As a general principle, the more criteria a person can satisfy, the stronger their claims to rights in Country.

Another argument that people may face in opposition to a repatriation claim is that they are not members of the same group as those who were historically recorded as being the traditional owners of a certain piece of Country. This ignores legitimate socially acknowledged rules of rights in Country being acquired through succession. In Aboriginal Australia, the incorporation of lands that historically belonged to one group into the lands of another group is usually achieved through culturally recognised processes of succession. That is where a group takes over the lands of another group by a process of inheritance that is recognised by the wider community and their neighbours. Succession, whether by local residents or immigrant Indigenous groups, is a legitimate, and legitimising, process following established and acknowledged principles, conventions or rules.

In the past, local landowning groups died out — either owing to their not having male children or through acts of colonial violence — leaving vacant lands. This is equivalent to a homeowner dying without immediate family to leave the house to. These vacant areas are eventually recolonised by other groups or families. Usually the colonising group is a close cultural, social and geographic neighbour of the original group and shares significant elements of social and religious organisation, such as being distant family members, as well as familiarity with the social, economic and spiritual topography and resources of the lands.

Legitimate succession must be acknowledged by the wider community and their neighbours, and comes through fulfilling the criteria described above. Peer acknowledgment — that is, the acceptance and support of territorial claims by others — is an essential component in legitimising claims to land. Ownership and/or succession, and the exercising of associated rights, cannot continue without peer recognition. There is therefore no act of succession without a complementary acknowledgment and legitimisation of that succession by neighbours. The pressure applied by neighbouring regional and local groups also assists in the long-term maintenance of boundaries. At the local level, territories are also defined by social and economic pressures from landowning groups of neighbouring estates. These groups would resist hostile or excessive incursion into their territories, as well as oversee the succession to neighbouring vacant estates.

Local landowning groups rarely disappeared suddenly; the decline in the membership of groups was usually evident to the wider community over a number of years, allowing time to prepare for succession. Residence in a territory, and the performance of rights and responsibilities appropriate to it, by likely successors usually overlaps with residence and performance of obligations by surviving members of the declining landowning group. There is thus very rarely any break in the occupation, or knowledge, of a territory. In the past, succession was often a slow, almost imperceptible process. Modern documentation, and the requirement to satisfy legal demands of Western land management, may both speed up the pace of succession and yet restrict the complete takeover of areas by the groups currently considered responsible for them.

In asserting proprietary land rights, it is not necessary for a group to acknowledge that its ownership of particular lands was achieved through the process of succession. Succession was, typically, a gradual, almost unconscious process, often taking two or more generations to complete. Memory of an act of succession is quickly forgotten by the corporate group.

In opposition to the formal and legitimate process of succession is usurpation, which is an illegitimate process following no socially acknowledged principles. Usurpation is usually marked by competing claims to those of the community-preferred successors.

The location and extent of the lands claimed by a contemporary group may therefore differ from the location and extent of lands once owned by that group’s ancestors, as a result of legitimate cultural processes of succession. Acts of succession are ultimately confirmed in two ways: first, by a corporate group’s claim that they are entitled to occupation, use and enjoyment of those lands; second, by the acknowledgment by adjoining groups of the occupying group’s interests as they apply to the defined area.

The impact of gaining cultural rights to land by means other than direct biological descent is important in the area of repatriation. Even where historical evidence shows that other groups may have moved into areas that they did not previously occupy, this does not extinguish their rights and obligations to fight to protect and repatriate the items of cultural heritage, including Ancestral Remains, associated with those lands. The important thing is that their right to do so is acknowledged within the Indigenous communities of which they are a part. This is not such a surprising concept when it is acknowledged that governments make laws to protect Indigenous and non-Indigenous cultural heritage on much the same basis — as Australians, all non-Indigenous Australians have an obligation to respect the Indigenous and non-Indigenous cultural heritage of the lands they are on.

The practices at the National Museum of Australia largely reflect those of other state and territory museums. The National Museum’s repatriation processes try to be proactive. The work begins with the identification and documentation of Ancestral Remains or objects by geographical association (place) or cultural origin (identified cultural group). The next stage is preliminary consultation with relevant state and territory heritage authorities to assist in the identification of formally recognised representative organisations and/or individuals.

Once a prospective custodian, custodial group, or representative body is identified, they are advised in writing of the nature of the Ancestral Remains or objects available for return to them. Correspondence includes a statement of ‘Advice to Applicants’ that details how to apply for the return of material. This statement asks prospective custodians for any information that may assist in supporting their application for repatriation, including:

Why does a museum need this information?

As discussed previously, a museum spends from the ‘public purse’, and is expected to show evidence that due process has been observed and that its activities will accord with the laws of the state or territory jurisdictions in which the repatriation activities occur. A museum has no legal authority outside of its own state or territory. This responsibility encourages engagement with state and territory government Indigenous heritage management departments, and with Indigenous representative bodies such as land councils, native title representative bodies and community legal centres or legal aid services.

Indigenous representative bodies, established by legislation or supported by state, territory, or federal funding, have a responsibility to represent custodians, traditional owners and native title holders. The identification of such individuals and groups, based on cultural, anthropological and legislative criteria, is their day-to-day business. Their endorsement of a repatriation claimant assists a museum in fast-tracking the repatriation process, to the benefit of custodians. At the same time, such engagement provides some protection for museums when they are required to describe those individuals or groups they have dealt with, and the basis for their accepting them as being the appropriate custodians for repatriated items; for example, through government audits, ‘Freedom of Information’ requests, discovery of documents for other legal process (such as native title), enquiries by other Indigenous representatives or Senate inquiries.

Put simply, the museum recognises and uses the local knowledge that such organisations provide in order to assist with identification of prospective custodians or their representatives.

Despite what appears to be a rigorous list of criteria to be satisfied before engaging in a repatriation claim, the aim is not to make custodians sit an exam for the return of Ancestral Remains. The provision of such information is not mandatory and, in the majority of cases, a museum itself accepts the potential claimant group’s rights of ownership based on information gained in the initial process of identification. For example, as discussed earlier, local Aboriginal land councils in New South Wales, regional Indigenous heritage organisations in South Australia and land councils in the Northern Territory are endorsed by federal, state and territory governments and by relevant heritage departments. In other cases, certain individuals and local community groups may have an extensive history of recognition, by government authorities, as the appropriate people to deal with over the care of Ancestral Remains.

Such organisations, groups and individuals are not required to provide extra information in support of their claim. Indeed, the rule of precedent facilitates future repatriations. What these basic criteria do is discourage frivolous or vexatious claims for repatriation by people who may not be acknowledged or authorised by the majority of the community to make such claims. This is clearly a critical issue when it is remembered that any repatriation is an empowering event.