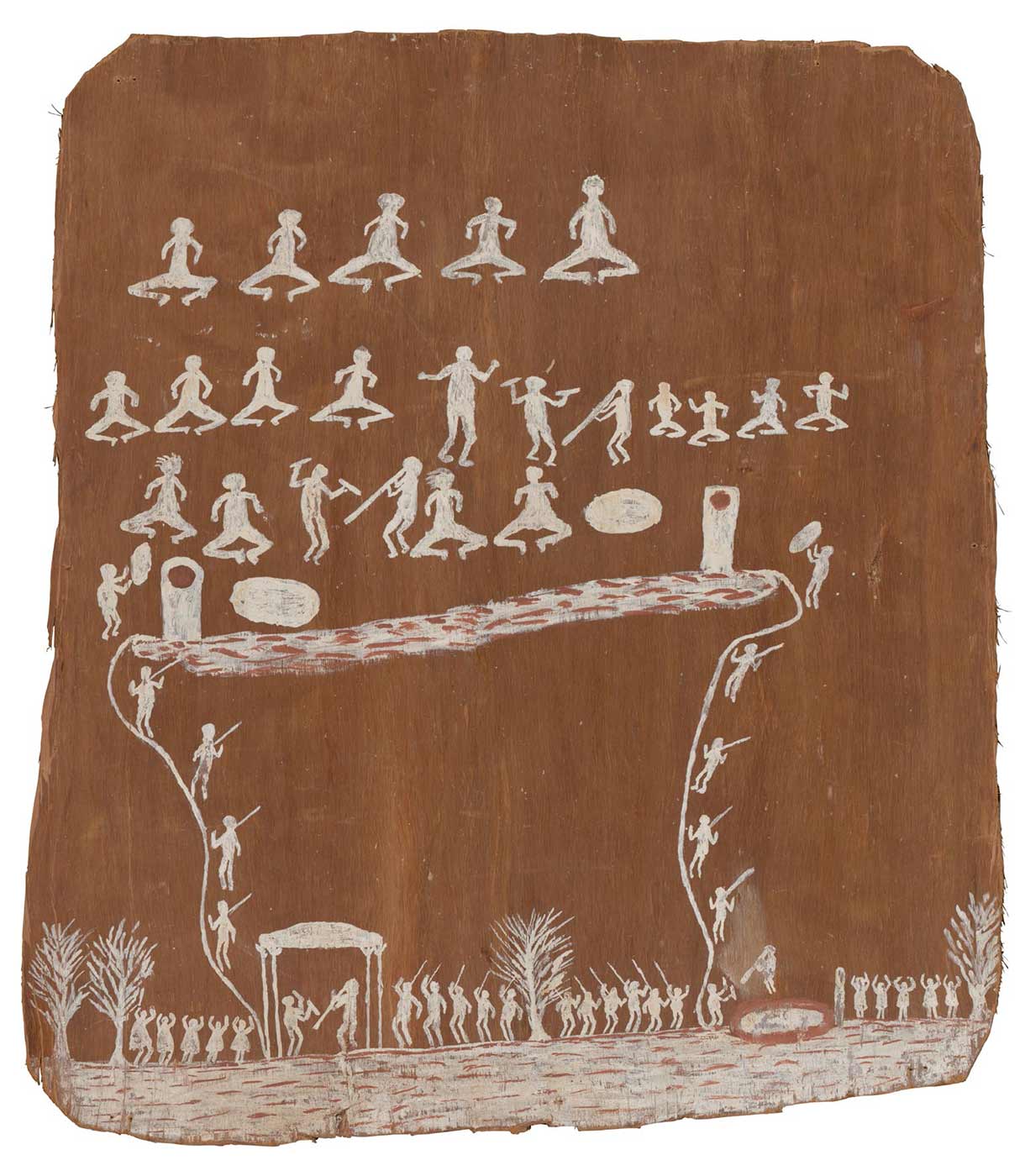 Disposal of the Dead by Ulambilam

Why were Ancestral Remains taken?

From the mid-eighteenth century, there was a growing interest in Europe in the natural and cultural worlds. This was encouraged by colonial expansion into other countries. Scientists looked to explain cultural differences between different peoples and nations; in particular, they were interested in whether foreign cultures were physically and intellectually superior or inferior to the dominant invading colonial culture. They undertook these investigations by examining peoples’ cultures, arts, and physical biological attributes — their bodies.

The long-held belief that some cultures were more primitive than others, and that this difference would be reflected in the physical attributes of individuals, became increasingly popular throughout the eighteenth and nineteenth centuries, boosted by the development of evolutionary theory. Ancestral Remains were collected and examined to determine brain size, shape, and so-called ‘primitive’ features on the Ancestral Remains themselves. The approach was that by examining the features of these Ancestral Remains it would be possible to determine the intelligence of the individual and their culture’s level of ‘development’. Remains from all cultures were collected, and skulls were often displayed ranked alongside each other in order of presumed physical development and intelligence. Indigenous cultures were usually assessed as being ‘primitive’ and of limited intelligence, while the dominant Western European cultures were assessed to be the most intelligent and advanced. This was used an excuse to impose Western control on Indigenous civilisations worldwide. Such an approach to classifying remains continued throughout the nineteenth and early twentieth centuries. The theory of evolution developed in the mid-1800s and provided further justification and frameworks for collecting, as remains were then used to argue for stages of human cultural evolution corresponding to presumed physical evolution. This belief that human remains reflected intellectual and cultural development has now been disproven.

Many Ancestral Remains were initially collected for the purpose of teaching anatomy and medicine. For example, the Australian Institute of Anatomy collected Indigenous and non-Indigenous Ancestral Remains with physical deformities or signs of disease or injury. These were used to teach medical students. Later, remains were used for comparative anatomy and studies of racial origins. With the increased interest in investigations of ‘cultures’, individuals and institutions, such as emerging museums, collected and traded remains extensively, in order to gather a set of cultures suitable for display alongside the technology and arts of those cultures. Finally, remains were collected as examples of ‘primitive’ art, especially when they had been decorated or modified.

From the late nineteenth century to the current day, as the disciplines of anthropology and archaeology developed, museums also became the official repositories for archaeological and anthropological collections, including human remains. In many Australian states and territories, for example, the government museum has been the government’s repository for both artefacts and remains recovered through archaeological investigation. In the past, Ancestral Remains taken from archaeological sites were also often displayed as cultural artefacts alongside tools and other archaeological materials.

How were Ancestral Remains removed, and from where?

The ways in which Ancestral Remains were collected, and the places from which they came, are many and varied. Human remains of all cultures and social classes were collected anywhere the dead could be found. Typical sources included:

Non-Indigenous remains were also collected, according to both legal and cultural beliefs and practices of the time. Thus the general public were aware that their remains might be stolen from graves and sold to a medical institution against their wishes, or that an executed prisoner might be handed over to a medical establishment for dissection, or that the remains of a mortally wounded soldier might be used for teaching treatment for war wounds. In nineteenth-century England, in particular, there are examples of non-Indigenous remains being acquired illegally through graverobbing and occasionally murder — actions that were both illegal and considered immoral at the time. This led to public outrage over the desecration of graves and of lives, with the passing of laws to protect the remains of deceased people.

Across the world, however, Indigenous Ancestral Remains were not given the same protection or respect given to non-Indigenous remains. They were simply taken, at will, by colonial collectors. Often the collectors were aware they were taking the Ancestral Remains illegally under both Western law and Indigenous cultural law, or against the wishes of family and descendants. Even when such acts were illegal, the law was rarely enforced.

The rise of the ‘reburial’ movement

Aboriginal and Torres Strait Islander people had long resisted the desecration of Ancestral Remains and their removal, although until recently they had little or no power to prevent it happening. In the late 1970s and early 1980s, there were changes in the Australian heritage industry that led to more respect being shown towards archaeological Ancestral Remains — the main source of new collections of Indigenous Ancestral Remains entering museums. It was, however, still difficult for Indigenous advocates to get a reasonable hearing, either from government or through heritage-related professions such as archaeology or anthropology. In 1985 Victorian Aboriginal leader Jim Berg succeeded in a landmark case when he recovered Aboriginal Ancestral Remains held by the University of Melbourne.4 This event led to collecting institutions and governments paying more attention to the appeals of Indigenous groups. In 1991 Ancestral Remains from Kow Swamp in northern Victoria were returned to the Yorta Yorta community and reburied. The significance of this return was that Western researchers considered the Ancestral Remains scientifically important, owing to their age and particular physical features, and yet they were still returned.

The 1990s also saw increasing Indigenous activism directed at the return of ancestors, with several successful, high-profile returns of Ancestral Remains from overseas institutions, such as the University of Edinburgh, as well as greater pressure being placed on Australian museums to explain why they had, and still kept, Ancestral Remains. Since 2000, there has been a dramatic rise in the number of Indigenous advocates, and also of professionals, institutions, and agencies committed to practices that limit the disturbance of Aboriginal and Torres Strait Islander Ancestral Remains against the wishes of custodial communities, and to the repatriation of those Ancestral Remains that have been collected in the past.

Arguments for and against repatriation

Over the years, debate about repatriation occasionally deteriorated into rhetoric, limiting discussion. Scientists would simply argue that Ancestral Remains were important to science, while Indigenous advocates would argue, based on spiritual and cultural reasons, that Ancestral Remains were important to them because they are family. There was little effort to understand each other’s perspectives. Some of the arguments for repatriation have already been described; these include:

Arguments against repatriation are similarly varied; they include statements such as:

Both sides in the debate make legitimate points. Arguments against repatriation ultimately argue that the return of Ancestral Remains prevents future research and the acquisition of new scientific knowledge. However, for Indigenous people, the key point is that their dead do not belong in museums, and only they have the right to determine what should happen to them. Other arguments for repatriation acknowledge that social justice is important, and that new knowledge, which is of important and continuing value to wider society, is generated because of the closer engagement with other cultures and their worldviews that emerges from the repatriation process.

Changing ideas and practices in museums and professional organisations

The Australian museum industry, represented by the professional body Australian Museums and Galleries Association (AMAGA), actively supports repatriation and provides the industry with a ‘Code of Ethics’, as well as guidelines on appropriate museum practice in the area of Australian Indigenous cultures. The code acknowledges other Commonwealth, state and territory legislation, as well as its own policies for the care and management of Indigenous material, as outlined in its 2005 document ‘Continuous Cultures, Ongoing Responsibilities’.5 AMAGA explicitly supports repatriation, stating:

1.4.5 If rightful custodians ask for the return of ancestral remains museums should agree. All requests for the repatriation of Aboriginal and Torres Strait Islander ancestral remains should be promptly and sensitively dealt with by museums, who must at all times respect the materials’ very sensitive nature.

1.4.6 Museums must not place conditions on communities with regard to the repatriation of ancestral remains.6

This is a very strong and unambiguous statement of support for repatriation by Australia’s peak museums industry representative body.

There have also been changes in the heritage industry and associated disciplines, in particular those involved with Ancestral Remains recovered from an archaeological context. The professional organisations most relevant to repatriation in Australia are the Australian Archaeological Association (AAA) and the World Archaeological Congress (WAC). Both have codes of ethics. The AAA code of ethics states:

1.3 Members ... specifically acknowledge the rights and interests of Indigenous peoples. AAA endorses and directs members to the current guidelines for ethical research with Indigenous parties published by the Australian Institute of Aboriginal and Torres Strait Islander Studies ...

3.2 Members acknowledge the special importance to Indigenous peoples of ancestral remains and objects and sites associated with such remains. Members will treat such remains with respect.

‘The Vermillion Accord on Human Remains’, developed by WAC in 1989, states:

1. Respect for the mortal remains of the dead shall be accorded to all, irrespective of origin, race, religion, nationality, custom and tradition.

2. Respect for the wishes of the dead concerning disposition shall be accorded whenever possible, reasonable and lawful, when they are known or can be reasonably inferred.

3. Respect for the wishes of the local community and of relatives or guardians of the dead shall be accorded whenever possible, reasonable and lawful.

4. Respect for the scientific research value of ... human remains ... shall be accorded when such value is demonstrated to exist.

6. The express recognition that the concerns of various ethnic groups, as well as those of science are legitimate and to be respected, will permit acceptable agreements to be reached and honoured.8

The WAC’s ‘First Code of Ethics’, adopted in 1990, states that members ‘shall abide by the following principles’:

3. To acknowledge the special importance of indigenous ancestral human remains, and sites containing and/or associated with such remains, to indigenous peoples.9

And, importantly, the code’s rules include:

5. Members shall not interfere with and/or remove human remains of indigenous peoples without the express consent of those concerned.

At the same time, the President of the WAC stated:

The World Archaeological Congress ... supported calls by Indigenous Australians for the repatriation of the bones of ancestors ...

Let me be quite clear on this. It is only a matter of time. These Ancestral Remains will be returned to the care of Indigenous Australians.11

Other professional organisations that have ethical codes that may influence repatriation activities include the Australian Anthropological Society (AAS) and the Australian Institute of Aboriginal and Torres Strait Islander Studies (AIATSIS). AIATSIS is Australia’s pre-eminent government-supported institution with regard to professional engagements and research with Aboriginal and Torres Strait Islander peoples. It maintains ‘Guidelines for Ethical Research in Indigenous Studies’, the principles of which are founded on respect for Indigenous peoples’ inherent right to self-determination, and to control and maintain their culture and heritage.12 Typically, most archaeologists and anthropologists working with Australian Indigenous peoples and heritage will defer to the guidelines of the AIATSIS over professional association codes.13

These statements recognise that Indigenous peoples find repatriation important, and this belief must be recognised and respected.

The importance of these codes is that any Australian heritage professional who impedes a repatriation activity is potentially working against the ethical codes of their profession and thus liable to professional criticism. Other countries may also have codes and guidelines that could be useful in pursuing the return of Ancestral Remains from overseas.