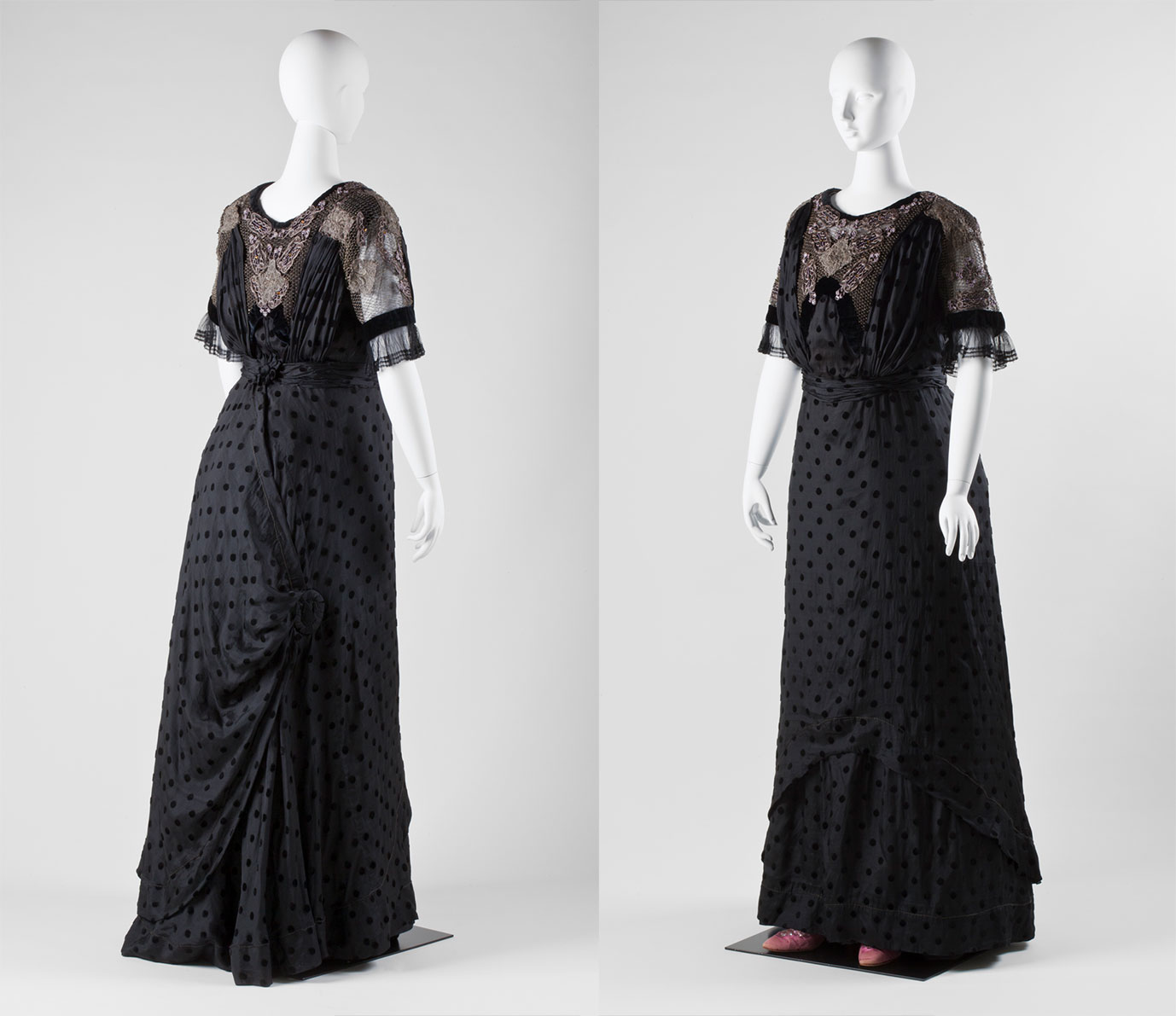 Clothing worn by previous generations has the ability to conjure up past lives. In the 1950s, this dress was gently taken from a cedar box, a treasure chest of old garments, for three little girls to carefully try on and play dress up, while their mother spoke about 'Nanna' and how beautiful she was. Nanna was Mary Ellerslie Barnard, and she had owned the dress in the early decades of the 20th century.

Born Mary Massey in Tasmania in 1868, she was brought to life for the children as a woman who smelt of violet water, who was very much a ‘lady’, beautifully groomed, and greatly loved by her family. Now her dress is part of the National Museum’s collection.

This evening dress is typical of the relaxed, columnar silhouette of 1910s haute couture. Evening dress featured asymmetry in design and fabric drape, overlays of diaphanous fabric, metallic thread embroidery and lace. The period was largely influenced by Orientalism, popularised by Léon Bakst’s sets and costume designs for the Ballet Russes’ performance of Scheherazade in Paris in 1909 and London in 1910. At this time the high 'Empire' waistline was re-introduced, worn with a soft, long-line straight corset hugging the waist and hips.

This black, velvet-spotted, full length, short-sleeved dress features an intricately adorned bodice of lace, velvet, beads and embroidery. The high waistband features a material flower on the centre front, and the skirt features a three-quarter diagonal overlay held in place with a fabric-covered imitation buckle at the hip. Handmade using a sewing machine, the dress shows little sign of wear. Although the dress does not have a label, it is possible that Barnard purchased it from Mutual Stores Ltd, a large Melbourne department store catering for middle class shoppers.

Mary Massey was a nurse in Launceston before her marriage in 1904 to Dr James Fox Barnard. She retired from nursing and replaced her uniform with garments befitting the comfortable lifestyle of the professional middle class.

The Barnards lived for a time in the Victorian and New South Wales border towns of Deniliquin, Wangaratta and Kerang, before settling in Corowa, New South Wales, in 1915, where James established his own practice. With three young daughters born before 1913, it seems that there was little opportunity for the doctor’s wife to wear this elegant dress, hence its pristine condition.

Black, velvet spotted, full length, short sleeved dressA black, velvet spotted, full length, short sleeved dress, featuring an intricately adorned bodice and back of lace, velvet and beads. The waist band has a material flower in the centre front and the front of the skirt crosses over on the diagonal and is held in place with a covered buckle at the hip. The dress is hand-made with...