1954: Visit of Queen Elizabeth II, the first by a reigning monarch 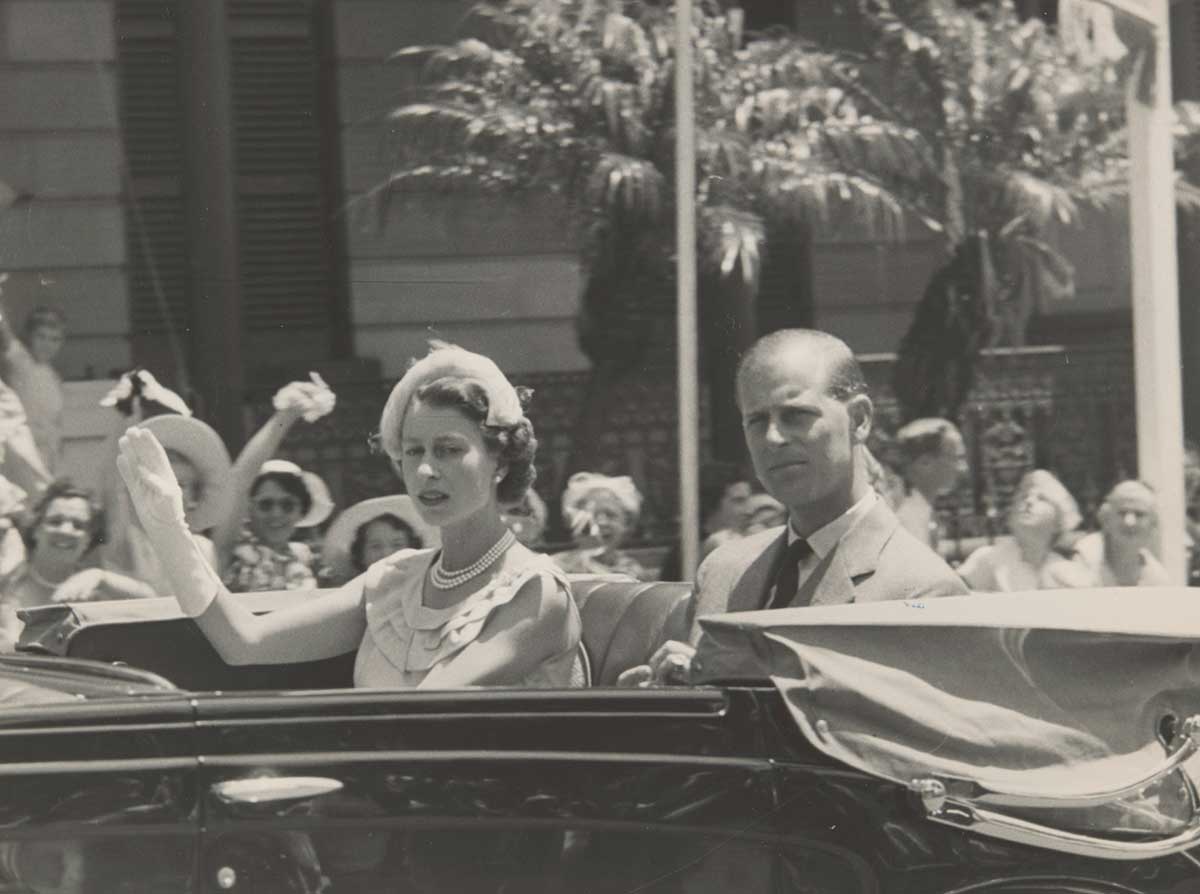 Queen Elizabeth II’s tour met with phenomenal success. About 75 per cent of Australia’s nine million people glimpsed her in person at least once. The nation was transfixed by their young, glamorous, but seemingly approachable, monarch.

The tour was seen as an opportunity to display Australia’s affluence and modern outlook in the postwar period and to promote the unity of culture, language and kinship under a common allegiance to the Crown.

It is a basic truth that for our Queen we have within us, sometimes unrealised until the moment of expression, the most profound and passionate feelings of loyalty and devotion.

It does not require much imagination to realise that when 8 million people spontaneously pour out this feeling they are engaging in a great act of common allegiance and common joy which brings them closer together and is one of the most powerful elements converting them from a mass of individuals to a great, cohesive nation.

In brief, the common devotion to the throne is a part of the very cement of the whole social structure.

Queen Elizabeth II ascended to the throne after the death of her father, King George VI in February 1952. She was crowned in Westminster Abbey, London, in June the following year.

The 1950s was a period of shifting dynamics between England and Australia.

Ties of Empire were still strong but Australia increasingly saw itself as an independent, modern nation developing its own strategic relationships within the Asia-Pacific region.

The new queen and her husband, Prince Phillip, the Duke of Edinburgh, embarked on a six-month tour of the British Commonwealth in November 1953.

The tour was planned as an opportunity to thank the Commonwealth for its support during the Second World War, and to introduce the new Queen to her subjects.

When the Queen disembarked SS Gothic at Sydney on 3 February 1954, she was the first reigning British monarch to set foot on Australian soil.

In the first of 100 speeches she made in Australia, Her Majesty set the tone for the tour by telling Australians that:

In the same short space of time we have seen the rise of Australia as a great nation, taking her full share in the counsels of the British Commonwealth and of the world. I am proud indeed to be at the head of a nation that has achieved so much.

During their eight weeks in Australia, the Queen and Prince Philip visited all state and territory capitals (except Darwin) and many rural centres. In an atmosphere of breathless adoration, the royal couple were shown the very best of Australian industry and society. The Queen also fulfilled her constitutional role by opening state and federal parliaments.

It was one of the last great pre-television events, and almost three-quarters of Australia’s nine million people glimpsed her in person at least once in cities and towns across the country.

Australia was transfixed by their young, glamorous, but seemingly approachable monarch. News of what she wore, the events she attended and whom she met made the front-page. Footage of the Queen’s activities was screened in cinemas across the country.

Described in a commemorative book as 'a thunderous progress through thousands of miles lit to incandescence by the affection and enthusiasm of nine million devoted subjects', the tour was a remarkable mass public celebration of the monarchy.

The young Queen’s presence in Australia helped reaffirm historic ties of loyalty and gave Australians a glimpse into a modern era of royalty.

In late 1954 William Dargie, a well-known and respected Australian artist, travelled to London to paint a portrait of Queen Elizabeth II.

This portrait, which came to be known as the ‘wattle painting’, was commissioned to commemorate the visit.

James Beveridge, owner of Melbourne-based printers McLaren and Co, commissioned the work because he wanted a portrait of the Queen ‘by an Australian artist for Australia’.

Gifted to the Australian Commonwealth, it quickly became a popular and familiar image of the Queen.

While Dargie was an accomplished and well-respected artist, he was still nervous about meeting, and painting, the Queen. Fortunately for Dargie, he was put at ease and described the Queen as behaving 'as naturally as if I were a friend who had called in for afternoon tea'.

The Queen had agreed to wear the wattle gown, created by Norman Hartnell, which she had worn during her tour in Australia.

Over the course of five sittings at Buckingham palace Dargie created a portrait that highlighted Australian imagery, depicted a relaxed yet regal pose and captured something of the young Queen that many Australians remembered from her recent tour.

When questioned by a journalist about the portrait, Dargie said, 'I flew 12,000 miles to do what was a very special job and anything might have happened to put me off… I don’t know what others will say…But I do feel this is one of the very best portraits of a woman I have ever done'.

To safeguard the painting, Dargie made a copy after turning the original work upside down so it would appear to him as a series of colours and forms. This is a well-known technique and reduces the temptation to try to improve on the original.

Both paintings were sent back to Australia on separate aircraft. The original arrived safely in January 1955 and was presented to the Australian Government.

As the copy was no longer required, Dargie gave the reproduction to his hostess in London, Lady Hamilton Fairley, later that year. It remained in her family’s possession until 2009 when it was purchased by the National Museum of Australia.

Her Majesty Queen Elizabeth The Second 1954 by William DargieAn accomplished war artist during the Second World War, William Dargie (1912-2003) was an eight-time winner of the Archibald Prize for portraiture. In 1954 he was commissioned by Melbourne industrialist James P. Beveridge (1881-1954) as the first Australian to paint the portrait of the newly-crowned Queen Elizabeth II (1926 - )....

The Queen in Australia, Australian Screen