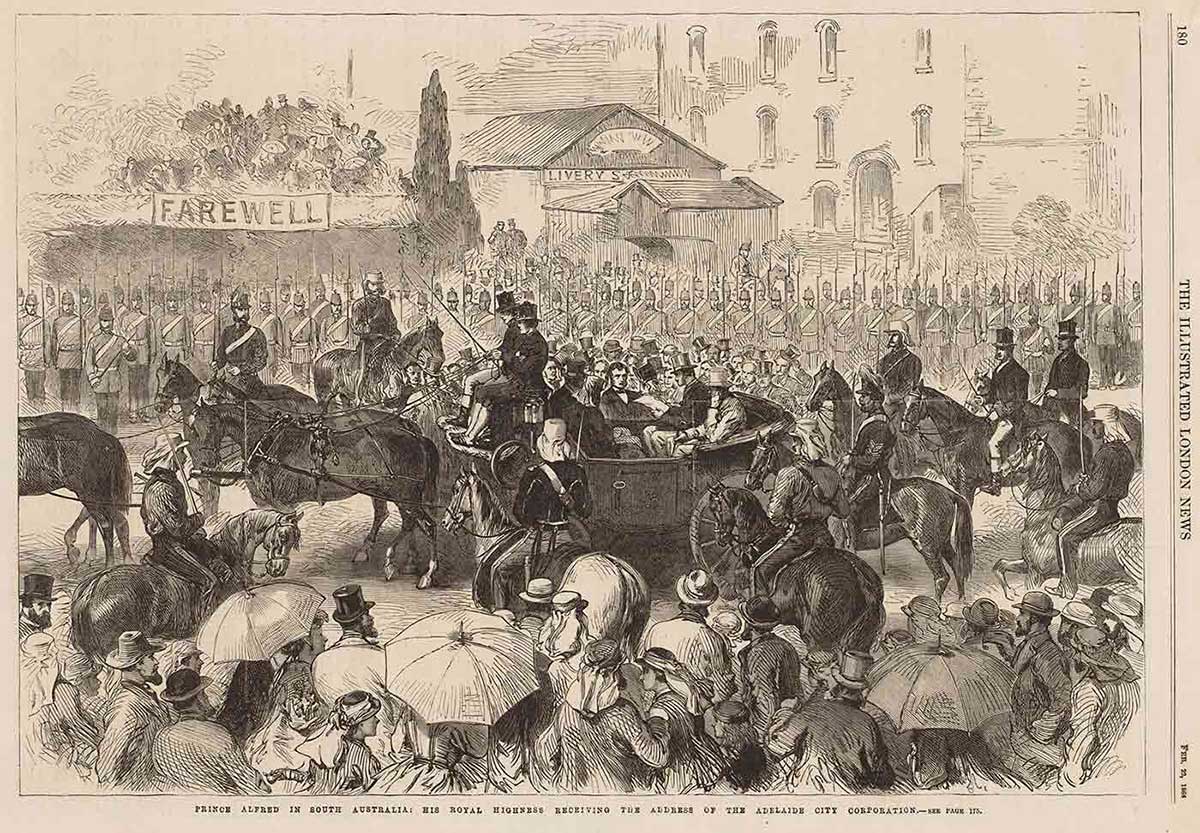 Prince Alfred in Australia: His Royal Highness Receiving the Address of the Adelaide City Corporation

On 31 October 1867 Prince Alfred, second eldest son of Queen Victoria, landed in Adelaide. The Prince was the first member of the British royal family to visit Australia and attracted huge crowds wherever he went.

The tour was marred by rioting, farce, tragedy and Australia's first political assassination attempt. Irishman Henry James O’Farrell shot and wounded the Prince at a Sydney picnic in 1868.

80,000 loafers all jammed together.
At a Melbourne Banquet, in very hot weather.
80,000 hungry souls, gnashing their teeth.
Eager to drink the wine, and gorge the roast beef.
80,000 savages, dirty and greasy.
Dr Louis Smith, clean but uneasy.
80,000 drunken louts roaring for wine.
A thin line of troopers drawn up in line.
Many pretty little girls and spectators huddled.
80,000 Melburnians stupid and fuddled.
Wasn’t this a picture to make Melbourne wince?
Wasn’t this a dainty dish to set before the Prince.

Born in 1844 Prince Alfred was the fourth child and second son of Queen Victoria and Prince Albert.

He joined the Royal Navy at age 14 as a midshipman and by 1866 had attained the rank of captain and had command of HMS Galatea, a steam-powered sail-equipped frigate. In the same year, Alfred was made Duke of Edinburgh.

In January 1867 the Galatea set sail from Plymouth on a round the world voyage visiting the Mediterranean before making a state visit to the emperor of Brazil. Two months were spent in the Cape Colony in South Africa before crossing the Indian Ocean to Australia.

The Prince docked in Glenelg on the outskirts of Adelaide on the afternoon of 31 October 1867. Massive crowds greeted him and lined the roads on the way into the city.

As darkness fell, 40,000 gas lights illuminated the colony’s public offices and immense portraits of the Prince adorned many of the buildings. Alfred spent three weeks in South Australia and masses of people assembled to greet him.

He left the state with a very positive impression saying in a letter to the press that, ‘I have noticed in Adelaide an absence of the poor and rowdy class, so numerous elsewhere’. Considering the SA Parliament had just legislated to keep the colony convict-free, his comment would have had an appreciative audience.

Religious tension and in Victoria

On 24 November 1867 Prince Alfred arrived in Melbourne and again huge crowds welcomed him. But religious tensions marred his time in the colony.

The Protestant community hall was decorated with an image showing William of Orange, the 17th-century English King, defeating Catholic armies at the Battle of the Boyne in Ireland.

Given the tension between Catholics and Protestants in Australia this was a provocative gesture. Crowds of Irish Catholics gathered outside the hall, singing republican Irish songs and throwing stones.

As the group was beginning to disperse the windows of the hall opened and shots were fired into the mob. A Catholic boy was killed and a riot ensued.

There was more mayhem on 27 November at the free public banquet the Prince was to attend.

The organising committee had planned for a crowd of up to 10,000 people, a substantial proportion of Melbourne’s 200,000 population, but 40,000 people arrived expecting free food and wine.

The crowd became restless, and when the Prince cancelled his appearance due to concerns he might be trampled, the angry crowd charged the barriers and another riot took place as thousands fought over the food on the tables and the wine that was to be dispensed from fountains.

Despite these unfortunate events the public was not dissuaded from trying to see the Prince and enormous gatherings continued to follow him. In Geelong, where another free banquet had been organised, larger than planned for crowds again gathered and the organising committee fled.

In Bendigo, a huge firework display was planned. The focus of the spectacle was a model of the ship Galatea. Tragically, three boys climbed into the model and set off the fireworks. They were trapped inside and burned to death.

Two days later a ball was planned at the newly built and named Alfred Hall. Unfortunately, it was a timber building lit with gas lamps and some of the calico sheeting inside caught fire and the hall burned to the ground. 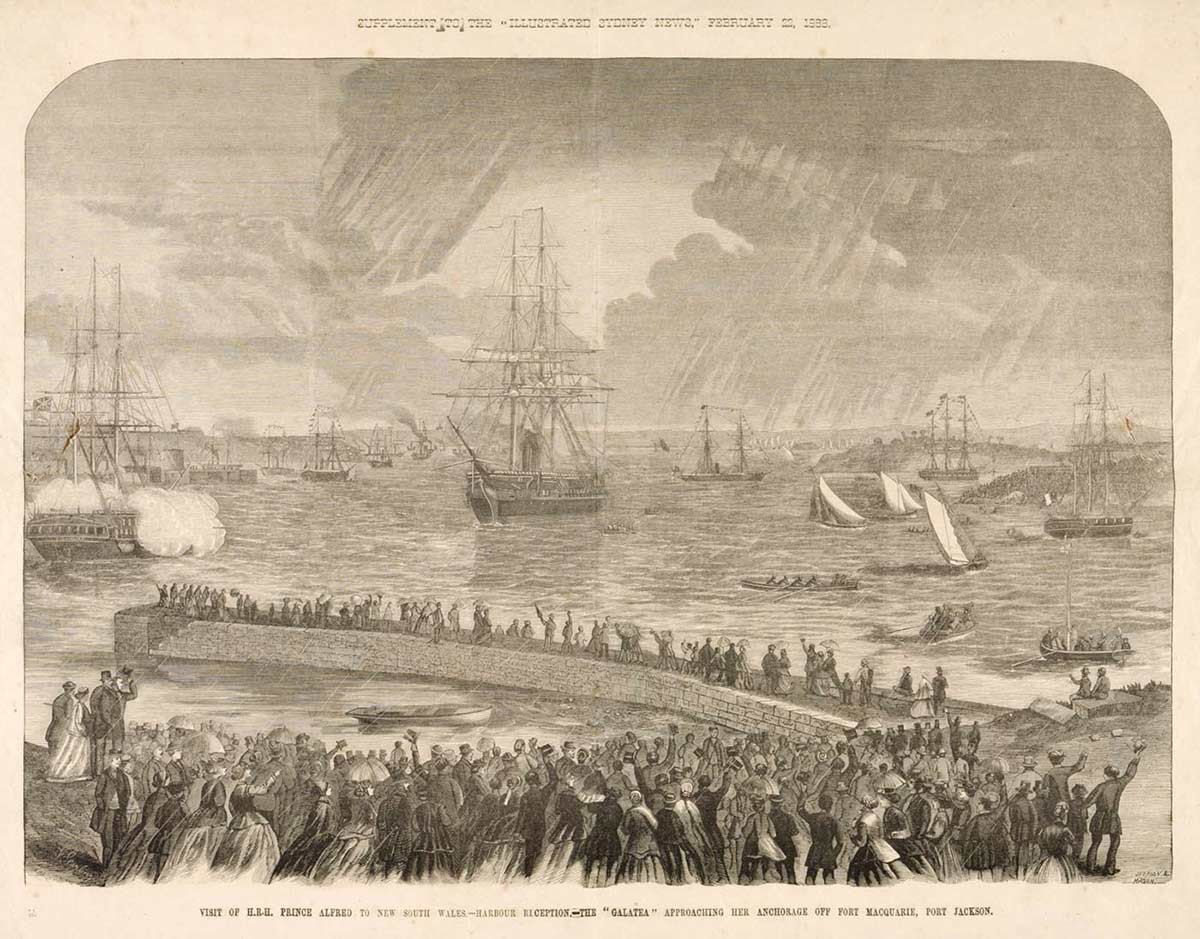 On 21 January 1868, having visited Tasmania, Alfred arrived in Sydney where he spent a month before travelling to Queensland for a week.

When the Prince arrived back in Sydney in early March his staff requested a less demanding social schedule. The royal tour organising committees agreed, but one event the Prince had agreed to attend was a picnic to raise funds to build a sailors’ home.

The picnic was scheduled for 12 March at Clontarf on Sydney’s north shore. Yet again, larger than expected crowds arrived early at the scene. The Prince sailed up from Sydney Harbour in his steam launch and landed in time for lunch.

After the meal he was escorted by one of the patrons of the event, Sir William Manning, on a walk. A man approached them from the crowd, pulled a double-barreled pistol from his jacket and shot the Prince in the back at close range.

Alfred fell to the ground calling, ‘Good God, I am shot … My back is broken’. The assailant was immediately tackled by a Mr Thorne, who wrestled the weapon from him as he tried to fire a second round. 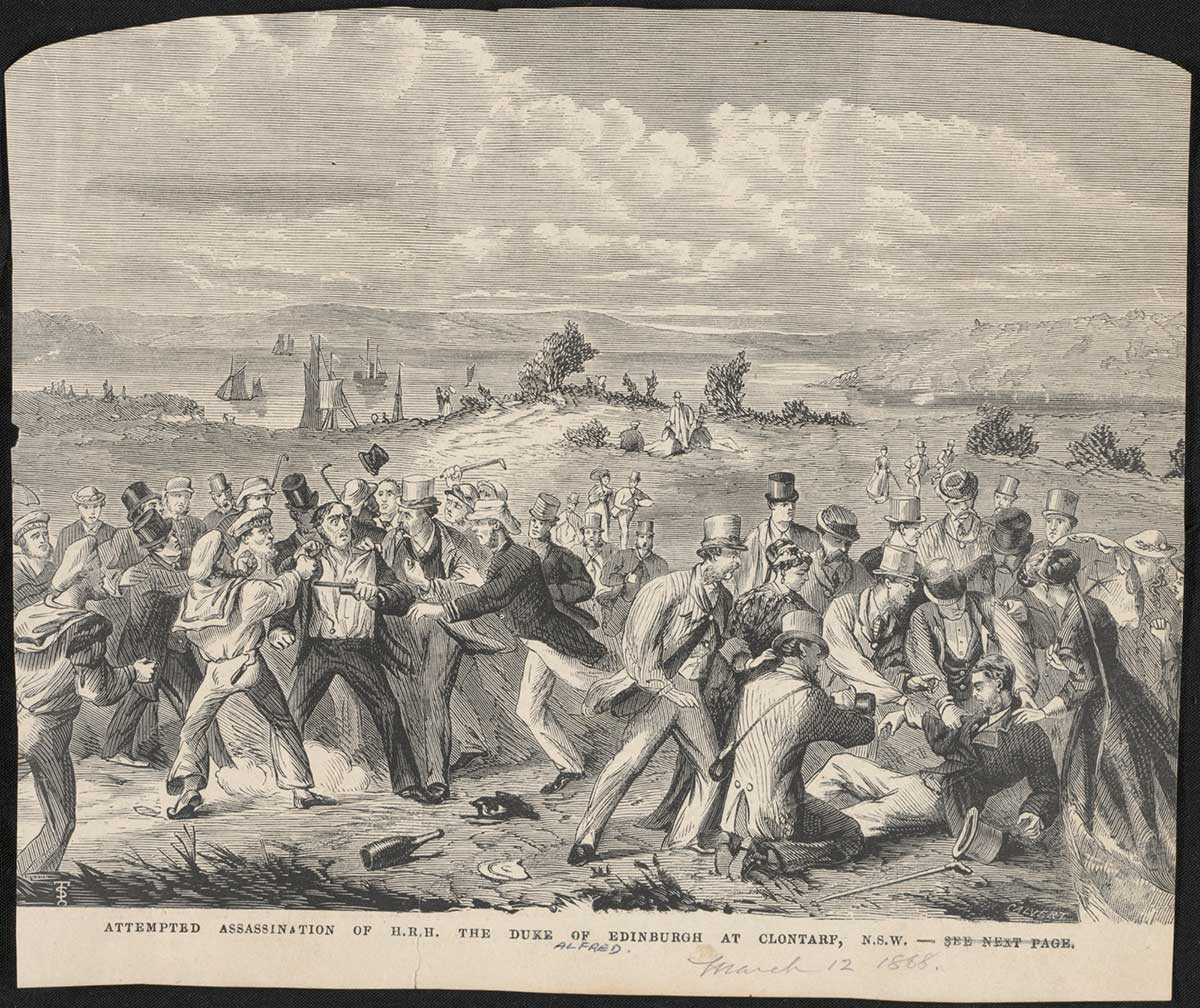 Attempted assassination of H.R.H. the Duke of Edinburgh at Clontarf, N.S.W. by Samuel Calvert

The shot had been heard around the picnic ground and the crowd panicked. The Prince was surrounded by a cordon of men, and after a medical examination confirmed the injury was not life threatening he was escorted back to his launch.

The would-be assassin was Henry James O’Farrell, a Catholic Irishman. Australia’s ongoing fear of Irish nationalism, which had become focused on the Catholic community and the separatist Fenian movement, meant that the predominantly Protestant crowd almost lynched O’Farrell on the spot.

Over the next few months there was an outpouring of anti-Catholic sentiment. ‘Indignation meetings’ were held around the country and the newspapers were full of articles attacking the Irish. This sectarian animosity which until then had been somewhat underground now became very public.

The Prince made a full recovery and O’Farrell was convicted of attempted murder, even though he exhibited signs of mental instability. The Prince asked that clemency be shown to his assailant but the request was ignored.

Alfred sailed for England on 4 April and O’Farrell was hanged in Darlinghurst Gaol on 21 April 1868.

Legacy of the royal visit

Concern for the Prince after the shooting, and the relief felt when it was known he would survive, saw the public contributing large sums to funds established to build hospitals in his name.

Catholic–Protestant animosity continued in Australia for another century.