A stately DE 36hp Daimler landaulette used by Queen Elizabeth II during her iconic 1954 royal tour is one of the most treasured cars in the Museum's collection.

Back seat drivers: the Royal Daimler 4:04

Watch the full Daimler Live at the Museum video on YouTube

The newly crowned monarch, Elizabeth, and the Duke of Edinburgh, departed the United Kingdom for a royal tour of the Commonwealth from November 1953 to May 1954. The visit strengthened Australia's relationship with Britain.

The tour prompted Australian Prime Minister Robert Menzies to joyously proclaim 'the most profound and passionate feelings of loyalty and devotion'. It was the culmination of an era when respect for the pageantry of inherited European institutions was instilled in Australians.

The Australian tour covered 27,000 miles (43,452 kilometres) by car, train, aircraft and boat. It visited all states and territories, except the Northern Territory. The Queen was introduced to many different people, products and places.

An estimated 75 per cent of Australians saw the Queen and the tour was judged an extraordinary success. This mass excitement was not unfounded; anticipation of a royal arrival had been building for five years.

Today it can be viewed as a cultural milestone that evokes strong memories for many Australians who grew up in a period of extensive social and cultural change.

The Daimler arrived at the Museum in 2009 in a dilapidated state. A long-term conservation and restoration plan based on the vehicle's significance was developed by the Museum's curatorial and conservation teams. 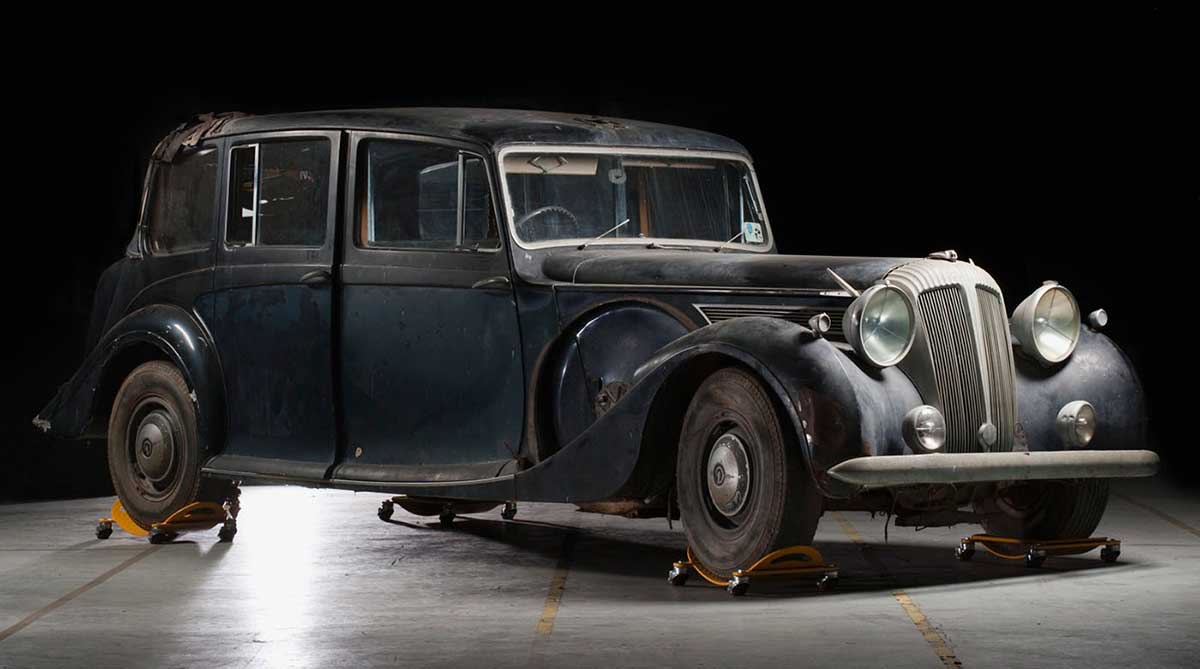 The Daimler before conservation

Although much of its glamour is somewhat diminished, the car retained almost all of its original fittings and impressive bodywork and was the perfect vehicle for Museum conservators to showcase their skills in returning it to its former glory.

Museum supporters and partners helped to raise more than $60,000 towards the conservation. The Daimler project was completed in 2019.

This vehicle is one of two intact survivors of a fleet of six Daimler DE 36hp models originally commissioned by Australian Prime Minister Ben Chifley in 1948 for the proposed 1949 royal tour of Australia by King George VI.

By sourcing these very British cars, it seems the Australian Government sought to preserve ties with British industry and culture.

A classic choice, the Daimler Motor Company in Coventry had enjoyed many years of royal patronage and undertook highly regarded bespoke coach-built commissions for ceremonial purposes.

This imposing four-ton landaulette vehicle was fabricated by coachbuilders Hooper and Company on a purpose-built Daimler chassis powered by a 'straight eight' (eight cylinders in line) engine.

Almost six metres long, it had luxurious interior fittings such as an electrically operated sun roof and windows, cream Bedford cord and blue leather upholstery, a walnut dash, roller-sprung silk window blinds, engraved glass light fittings and ashtrays, and thick fitted carpets. The folding landau section would allow the occupants to be easily seen, yet give some protection from the heat and dust of an Australian summer.

To the shock and disappointment of many, however, the tour was cancelled at the very last minute owing to the King's poor health. Extensive plans had already been made – the fleet was completed, crated and waiting to be dispatched to Sydney.

Under these circumstances, the Australian Government was required to fulfil its financial obligation to the Daimler Motor Company.

Jack Beasley, the Australian High Commissioner in London, was able to sell two Daimlers to the Maharajah of Mysore in India, but the high tax payable on luxury cars did not make these large and ostentatious vehicles attractive purchases in post-war Britain. The cars were modified to suit ceremonial requirements; at almost two metres in height, they were described as 'too great to enable them to go under many of England's low bridges'.

Still lacking buyers, the remaining four Daimlers were shipped to Australia in 1949, where they became part of the government car pool and were used sparingly by the Governor-General, Sir William McKell. After another postponement of the royal tour in 1952, the four cars were recalled for duty for the glamourous young Queen two years later.

Fully refurbished, this Daimler landaulette was one in a fleet of 55 British and Australian-manufactured vehicles operating throughout New South Wales, the Australian Capital Territory, Victoria and South Australia for the 1954 royal tour.

According to the Queen's itinerary, detachments of the main fleet were transported around the country by air and rail to supplement sub-fleet vehicles in Tasmania, Queensland and Western Australia, bringing the total to 115 vehicles.

Administered with military precision by the Royal Visit Car Company, the management of the convoy was no mean feat. The company registered an astounding 500,000 miles covered by motor car over the duration of the tour, with barely a delay or incident.

In a pre-television age, this logistical efficiency was instrumental in allowing an estimated 75 per cent of Australia's population to see the Queen at least once during the tour's two-month duration. 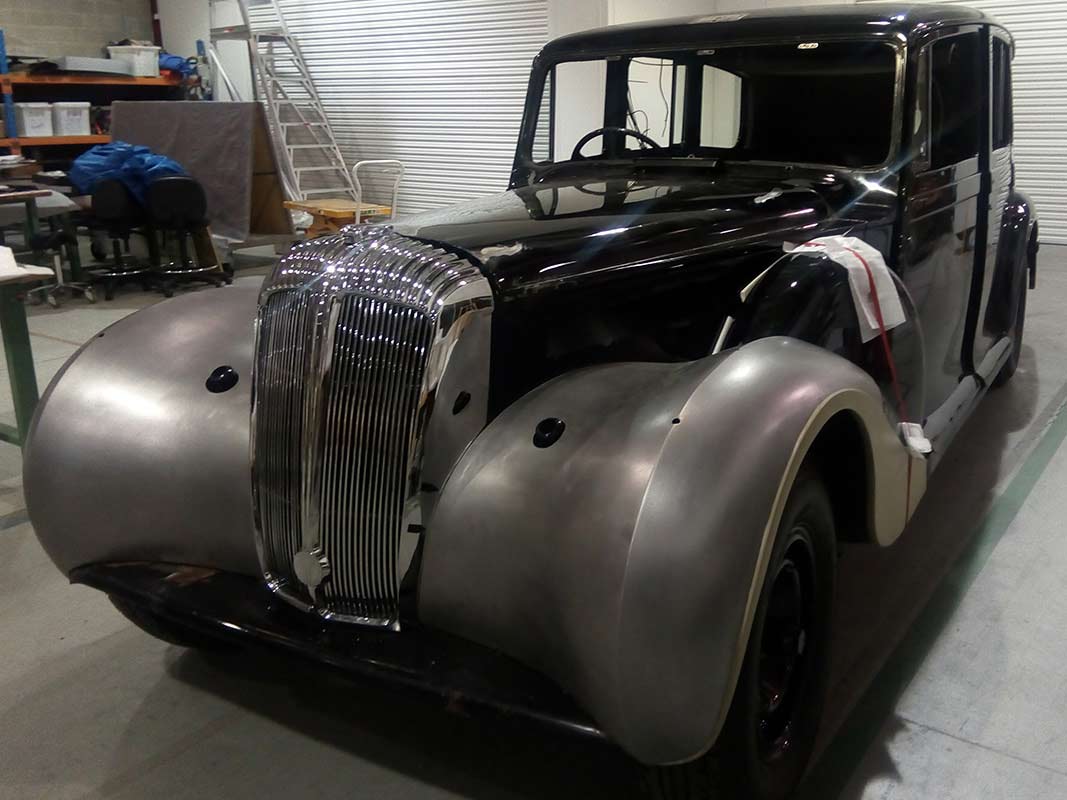 The Daimler before final paint and bodywork in 2018

Warm welcome for the royal visitors

Families travelled many miles from their homes in the hope of catching a glimpse of the royal couple.

The abiding memory for those Australians who did not get the opportunity to press the Queen's gloved hand or attend a royal ball or garden party, was of her waving hand and smiling face as she glided by during the Royal Progress, a stately drive enacted through upwards of 80 towns and urban centres across Australia.

Many photographs of the day capture the smartly dressed crowds clustered at a respectful distance, flanked by hordes of expectant children and hovering policemen. Even the media entourage, who recorded the Queen's every move, crouched in neat unobtrusive rows as she cruised past at 6 mph.

This Daimler landaulette, generally used to transport the Queen from airports towards town centres and to evening engagements, acquired an iconic character of its own and became synonymous with the 1954 royal tour as captured by the many lenses of the media and public.

As the excitement of the tour began to fade, the Australian Government again faced the issue of disposing of the four Daimler vehicles. By now six years old and increasingly unfashionable, they were replaced in the Commonwealth government car pool by newer Humber vehicles.

A few months after the tour, this Daimler landaulette was sold to the Governor of South Australia, Sir Robert George, who enthused that the car was 'a splendid acquisition which we shall be proud to use in our duties to the state'.

It indeed graced various vice-regal occasions, including the opening of parliament in 1957 and the Governor's farewell tour of Adelaide in 1960.

By the early 1960s the car had again become surplus to requirements. Described as 'on its last wheels', it required extensive maintenance and the Governor's motor garage staff expressed doubts as to the future availability of parts due to the decline in the market for bespoke coach-built vehicles.

Sold on, it passed through two further South Australian owners in the late 1960s and early 1970s. In 2009 it was purchased by the Museum from a private collector.

Significance of the 1954 royal tour

This Daimler landaulette is an iconic symbol of the 1954 royal tour and reminds us of a period when royalty were far more accessible to the public. Not only visually impressive, it has strong relevance to broad areas of Australian history and is themes including the monarchy in Australia and innovation in the motor industry.

The monarch’s off-road vehicle of choice

Between the 1950s and 1970s, the Australian Government also maintained a fleet of Land Rovers for royal tours and vice-regal occasions. It is no secret that the Queen is fond of these off-road vehicles and has owned one or two herself during her 70-year reign. Perhaps her wartime training as a mechanic sparked an interest.

This 1958 Land Rover utility was used for her visits to Queensland in the 1960s and 1970s, where it handled bumpy roads and grassy showgrounds with ease.

Customised in Sydney to the Queen's specifications, it includes a protective screen and handrail to help avoid flying skirts and lost hats in windy weather. Reportedly dismissing the idea of a protective roof in favour of using an umbrella, the Queen was occasionally drenched by tropical downpours.

1948 Daimler landaulette, used in the 1954 Royal Tour of AustraliaA black and blue Daimler landaulette with a partially soft top. The car has three windows along each side. There is a bench seat in the front and back as well as two seats that fold away in the middle. The front bench seat is leather whilst the back is fabric. The monograph 'D' appears on the hub caps and there is wooden detail...