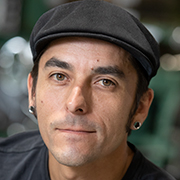 Ten years after the National Museum acquired a 1948 Daimler landaulette used in Queen Elizabeth II's debut royal tour of Australia, most — but not all — of the mysteries surrounding this historic vehicle have been unravelled.

The Museum has blended traditional coachbuilding techniques and near-lost trade skills with modern technologies to make the Daimler fit for display. Work has progressed on the interior seats, timber work, paint and body work. As we move nearer to completion the excitement builds.

This car was one of several ordered for the 1954 Royal Tour, an event of a scale not seen in Australia before or since. The Museum acquired this Daimler in 2009 and made a commitment to return the vehicle to a state representative of its royal history. With the enthusiastic and generous support from Daimler enthusiasts and members of the public, the project was off to a flying start.

As time went on the intricacies of such a complex project were revealed. The Daimler has tested and challenged the Museum's Conservation team as we strive to make this project the benchmark for hybrid museum conservation practice.

The vehicle is coach built, meaning the chassis, engine and front guards were made by the Daimler company and the body and interior fitout were produced by the Hooper coach company. An estimated 30,000-plus components make the assemblage that is the vehicle and its manufacture gives great insight into the automotive industry in postwar England.

To date, almost 35 different British manufacturers have been identified as contributing components such as Girling brakes and Jubilee hose clamps. Many of these manufacturers are still in production and they have been a vital source for replacing parts.

Decision-making on the treatment and approach for individual components is an ongoing challenge for the Conservation team. Conserving a vehicle for museum use might seem to be similar to the restoration of other historic cars, but it varies with the desire to keep as much original material as possible.

Meticulous research seeks to uncover the details and significance of modifications. For instance we know from the historical record the King George VI — at 5’9” or 175 centimetres tall — had requested a lower rear canopy when the cars were ordered, to ensure he could be seen by the public.

The Daimler at the National Museum also has seat risers under the rear seat. Was this a modification employed to allow even greater visibility for Queen Elizabeth at 5’4”, or a later modification not significant to the tour, but employed during its use as a funerary vehicle?

The research continues and I would like to thank all the donors to the Royal Daimler project for their support. Thanks also to the conservators, curators, suppliers, craftspeople and contributors who continue to be involved in this exciting project.