Now showing in the Gandel Atrium

The 'wattle painting' of the newly crowned Queen Elizabeth II was completed by Australian artist Sir William Dargie in 1954. The Queen's 1954 tour was the first time a reigning monarch had set foot on Australian soil. About 75 per cent of Australia's population caught a glimpse of the new young queen.

The wattle painting is one of the most recognisable 20th century Australian portraits. 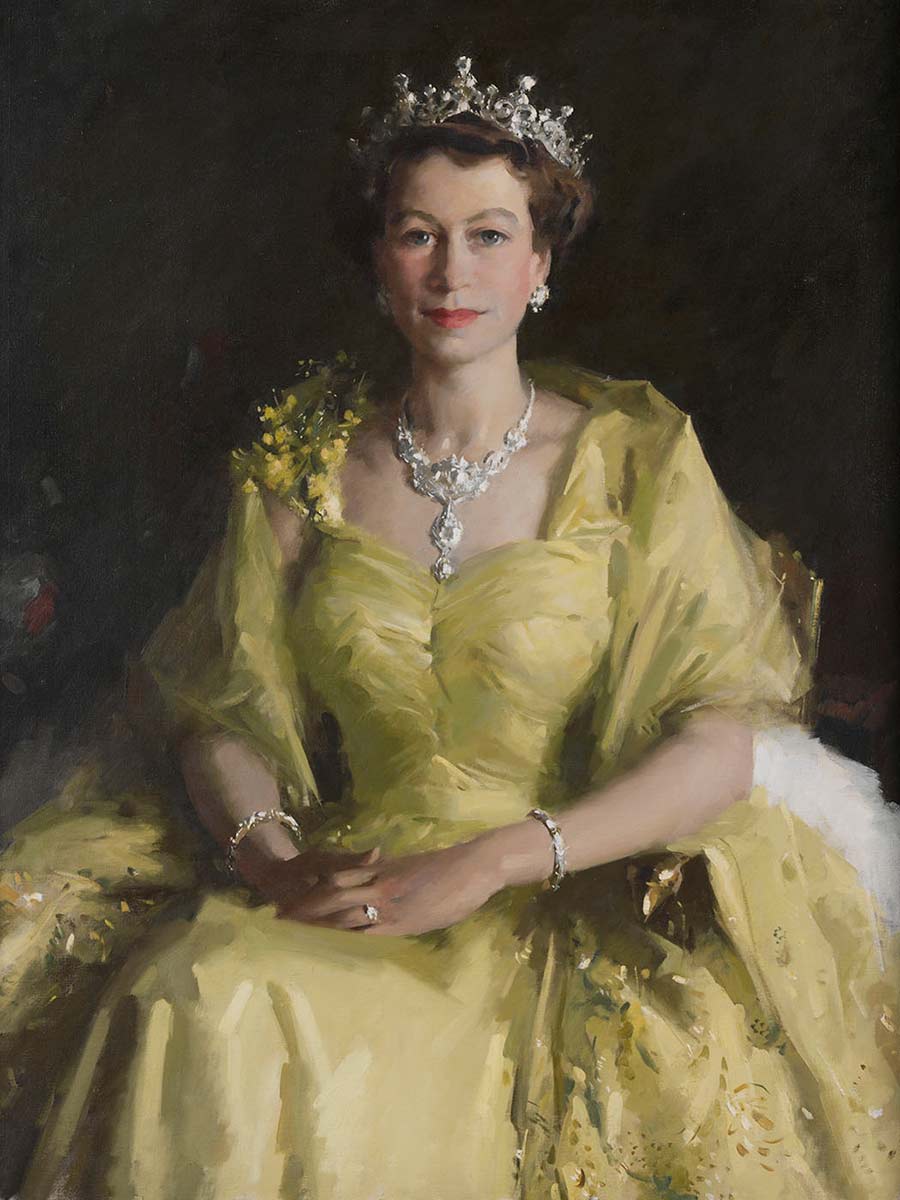 Australia and the monarchy

In the 1950s the idea of monarchy, and the attractive young Queen Elizabeth II as a role model, was firmly rooted in popular culture. Education instilled veneration for the pageantry of inherited European institutions and the presence of the monarchy shaped a generation for whom to be Australian was to be British.

While Australian attraction towards all things British waned under the wave of postwar immigration and as the republican debate gained strength, this portrait remains immediately recognisable to several generations of Australians.

Hartnell designed the dress for the 1954 Australian tour. It is unambiguously patriotic and easily recognisable as the dress worn during her first evening engagement of the royal tour in Sydney and again to her last evening function in Perth before leaving Australia.

Queen Elizabeth II was crowned at a coronation ceremony in Westminster Abbey in London in June 1953.

The monarch toured the Commonwealth from November 1953 to May 1954 in a highly publicised venture which proved a cultural milestone during a period of immense social change.

When Queen Elizabeth II disembarked SS Gothic at Sydney on 3 February 1954, she was the first reigning monarch to set foot on Australian soil.

In 8 weeks she and Prince Philip, the Duke of Edinburgh, visited all state and territory capitals (except Darwin) and many rural centres.

In an atmosphere of breathless adoration, the royal couple was presented with the very best of Australian industry and society. The Queen also fulfilled her constitutional role by opening state and federal parliaments.

One of the last great pre-television events, almost three-quarters of the population glimpsed her in person at least once in various cities and towns across the country.

Described in a commemorative book as 'a thunderous progress through thousands of miles lit to incandescence by the affection and enthusiasm of nine million devoted subjects', the tour was one of the major displays of mass public celebration of the monarchy.

Sir William Dargie was an 8-time winner of the Archibald Prize for portraiture and an accomplished war artist with the Australian forces during the Second World War.

He was commissioned by Melbourne industrialist James P Beveridge as the first Australian to paint the portrait of the newly crowned Queen.

Intended to commemorate the historic Royal Tour of Australia from February to April 1954, permission to arrange the necessary sittings for this significant portrait was obtained by Prime Minister Robert Menzies.

In November 1954 Dargie quickly established a rapport with the Queen over five sittings at Buckingham Palace in London. This probably contributed to his depiction of what is agreed to be a good likeness of the Queen.

Her hair is loosely pinned back under a diamond tiara given to her by her grandmother Queen Mary and she wears a diamond necklace received as a wedding present from Nizam of Hyderabad.

This glowing colour scheme skilfully conveys the freshness of the youthful Queen in an almost impressionistic style. Her direct gaze conveys her vitality through skilful effecting of thoughtful eyes and expressive mouth. The portrait is commonly thought to present an unusual juxtaposition of a graceful young woman and a regal Queen.

Dargie had become concerned that this significant portrait might be damaged or lost during transit to Australia.

He started work on a second replica copy, to be freighted separately, in the hope that 'at least one version' would arrive safely in Australia. This 'spare' was painted upside down at the London home of his hosts, the Hamilton Fairley family.

Artists recognise this seemingly odd move as an attempt to view the portrait as a series of colours and forms. Eliminating the natural desire to improve on the original, this endeavour prevented embellishment and created a true identical copy.

This fascinating provenance and the circumstances of the replica's creation are attested by the inscription on the reverse, which reads:

I painted this copy of my portrait of HM Queen Elizabeth II of England from my own original painting at 81 Duke Street; London W1, in November–December 1954. This copy was made to ensure the safe delivery to the Australian Commonwealth Government of at least one version of this portrait, as the painting was to be air-freighted from London to Australia. William Dargie, WA Dargie, 25.8.55. Presented to Lady Hamilton Fairley, in whose House this was painted. Dargie.

Dargie later painted a third version after the Queen expressed her delight at the original and requested a personal copy. 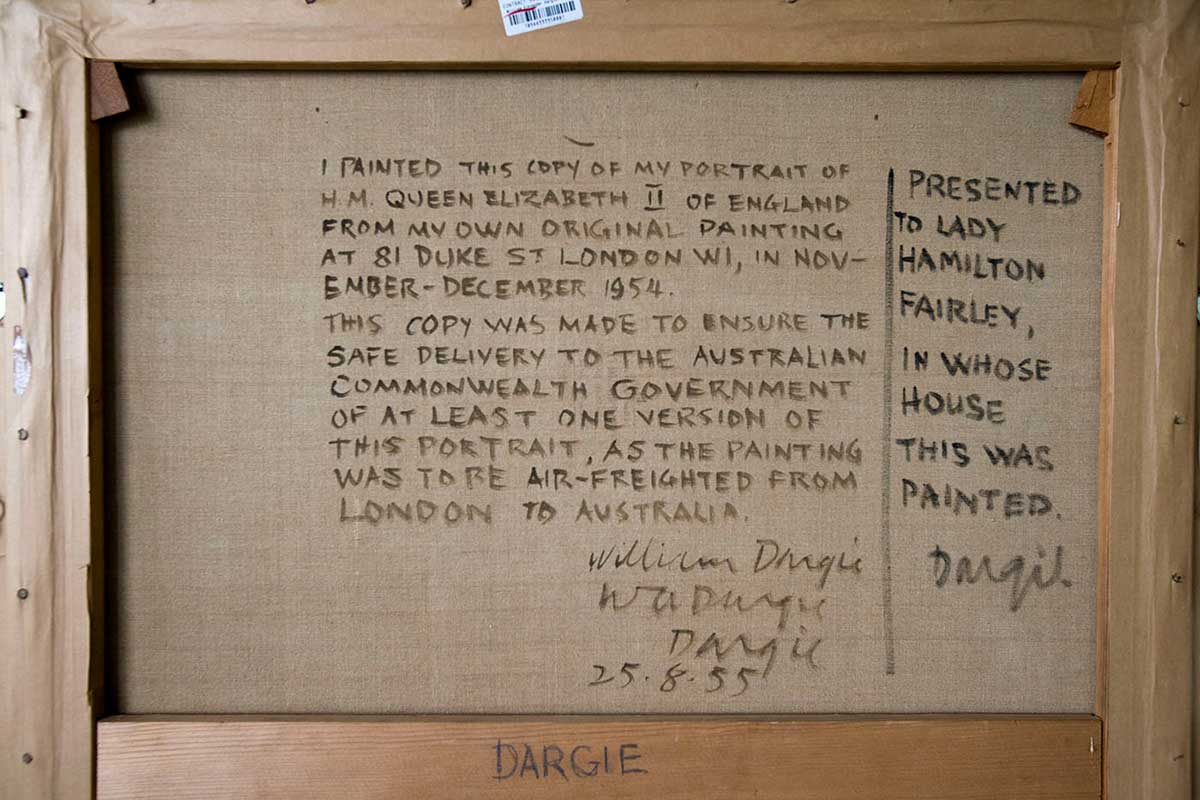 Correspondence with Beveridge in January 1955 details Dargie's intention to insure both paintings for £1000 and return them to Australia on separate flights.

The original portrait was officially presented to the Commonwealth by Mrs Beveridge at Parliament House on 21 April 1955, shortly after James Beveridge's death. It was received on behalf of Prime Minister Robert Menzies through the Governor-General William Slim. Owned by the Historical Memorials Committee, it remains on long-term loan for permanent display at Parliament House.

The 'wattle painting', as it became known, was well received by the Australian public and became one of the most recognisable and treasured examples of 20th century Australian portraiture.

Shortly after its completion, colour prints were made available and the work took on the status of official portrait. A royal presence was for many years a common feature in federal, state and local government departments as well as countless courthouses, schools, hospitals, libraries, church halls and Returned Soldiers' League clubrooms throughout Australia.

For many postwar immigrants this portrait was their first encounter with an artwork by an Australian artist as it was reproduced on Australian naturalisation papers from the mid 1950s. Under the terms of the 1954 Australian Citizenship Convention, a print of the work was generally present in local town halls where many naturalisation ceremonies took place. 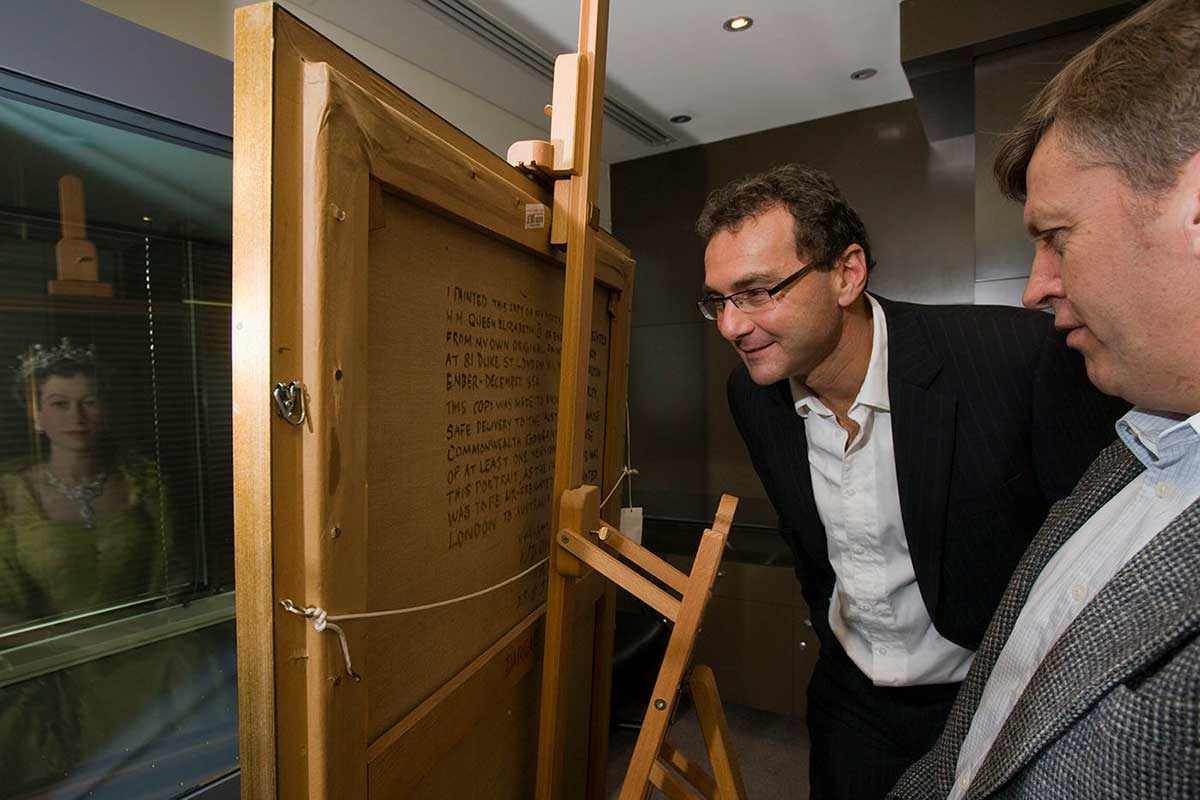 Dargie returned to London in mid-1955 to paint a portrait of Anne, the young Princess Royal. It was during this visit that he officially presented the painting to Lady Hamilton Fairley as a gift in August 1955.

It was enjoyed for over 50 years and displayed in the private collections of the Hamilton Fairley family until 2009 when it was offered for sale for the first time. The National Museum of Australia acquired the painting at auction.

Representative of the beginnings of the changeable relationship between the Australian public and the young Queen they fell in love with, the replica 'wattle painting' retains its iconic status as a reminder of the never-to-be repeated fervour of the 1954 royal tour. It will likely continue to capture the imagination of the Australian public for many years to come.

Her Majesty Queen Elizabeth The Second 1954 by William DargieAn accomplished war artist during the Second World War, William Dargie (1912-2003) was an eight-time winner of the Archibald Prize for portraiture. In 1954 he was commissioned by Melbourne industrialist James P. Beveridge (1881-1954) as the first Australian to paint the portrait of the newly-crowned Queen Elizabeth II (1926 - )....
On display
Facebook
Twitter
Pinterest
Messenger
Email