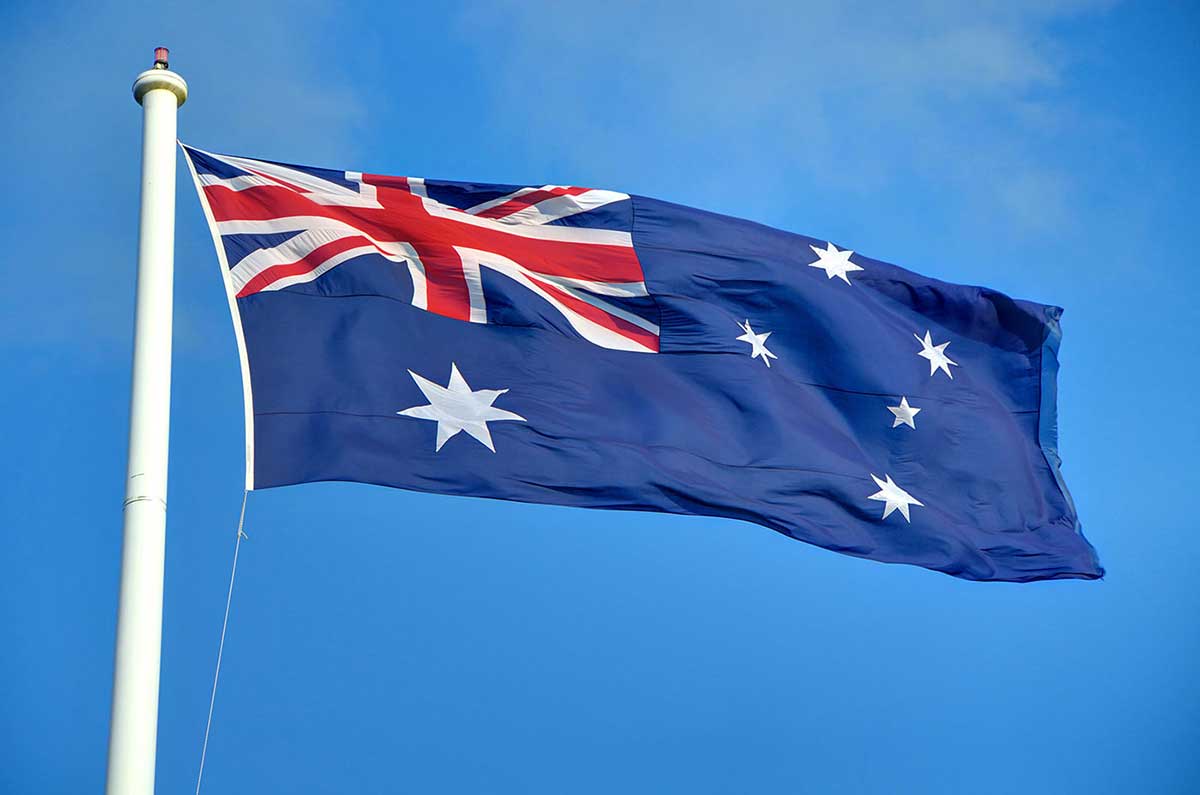 What is now the Australian national flag was created soon after Federation in a competition in which nearly 33,000 people took part.

However, for the next 50 years Australia’s official flag was the British flag, the Union Jack. This changed in 1954 when the Flags Act came into effect.

The Bulletin magazine, 28 September 1901, on the design that won the national flag competition:

… a staled réchauffé of the British flag, with no artistic virtue, no national significance ... Minds move slowly: and Australia is still Britain's little boy. What more natural than that he should accept his father’s cut-down garments, – lacking the power to protest, and only dimly realising his will. That bastard flag is a true symbol of the bastard state of Australian opinion. 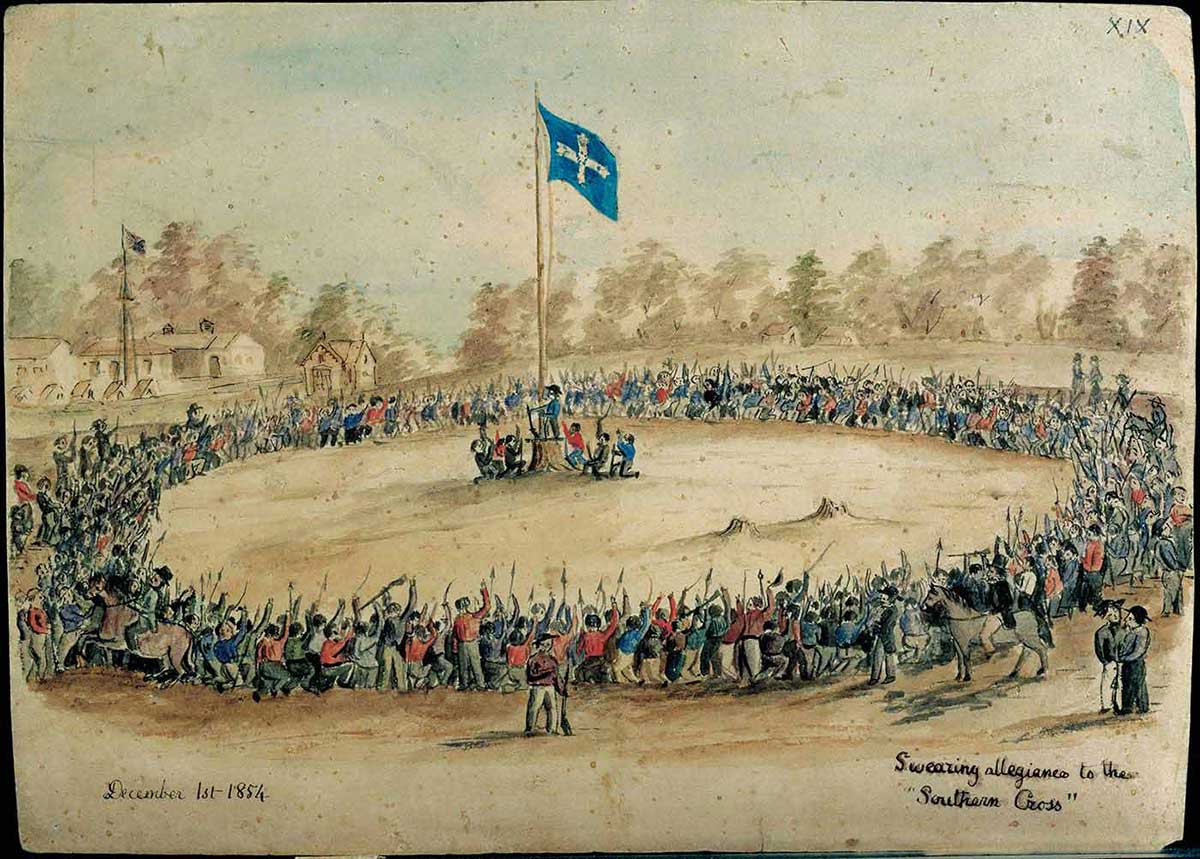 Swearing Allegiance to the Southern Cross by Charles A Doudiet

A flag is a powerful symbol. For some nations, such as the United States, the flag is treated with great reverence and flown proudly in people’s front yards. In Denmark it was traditionally believed that the flag was given to an ancient king directly by God.

The design, use and perception of a flag says much about the nation it represents.

Flags as we know them today have been around since the early 17th century when they began to appear on battlefields and were flown from ships.

Various flags emerged as potential national flags in Australia throughout the 19th century. All featured the Southern Cross, the constellation only visible from the Southern Hemisphere. All but the Eureka flag included the Union Jack in the top-left quarter (known as the canton).

These early flags included the:

Federation and the flag competition

In the lead-up to Federation in 1901, the Melbourne Herald newspaper and the journal Review of Reviews for Australasia held competitions to design a flag for the new quasi-independent nation. These competitions were amalgamated into one managed by the new federal government, which offered more prize money.

The competition stipulated that designs for two flags be provided: one for official use, and one to be used by merchant ships registered in Australia. More than 32,800 submissions poured in.

The results were announced on 3 September 1901 at the Melbourne Exhibition Building where many of the submissions were on display. The £200 prize money was divided between five people, all of whom submitted virtually identical designs for what is now the National Flag but which was then called the Blue Ensign.

The dark blue flag included the Union Jack in the canton (as did most of the other submissions), and beneath it a Federation Star with six points representing each of the states. The right side, known as the fly, sported the five stars of the Southern Cross.

The flag for merchant ships was the same as the national flag except that it had a red background instead of a blue one. It was known as the Red Ensign.

The flags accurately reflected an Australia that saw itself as simultaneously distinct from Britain but very much affiliated with it.

In practice, the Blue Ensign was rarely used. This was due in part to the strong allegiance Australians felt to Britain but also because the federal government itself did not advocate its use by the public.

The Blue Ensign was designated for use only by the government, even though in most cases it preferred to fly the Union Jack.

It was not until the outbreak of the First World War in 1914 that the Blue Ensign began to enjoy some popularity, appearing in pro-war propaganda posters and occasionally taken into battle.

Between the wars, the use of the Union Jack, the Blue Ensign and the Red Ensign largely came down to personal preference.

The Menzies government introduced the Flags Act to encourage the public to use the Blue Ensign instead of the Union Jack and the Red Ensign, with the latter only to be used on merchant ships.

The Flags Act explains that the Blue Ensign is Australia’s National Flag. It defines flag dimensions protocols around use.

The Flags Act Bill was passed in December 1953 and was given Royal Assent on 14 February 1954 by the Queen, who was visiting Australia.

The flag has changed little since the 1901 competition, although in 1908, when Australia acquired Papua as an external territory, a seventh point was added to the Federation Star to represent Papua and all subsequent territories.

In 1995 the Aboriginal and Torres Strait Islander flags were proclaimed official flags under the Act.

The Aboriginal Flag was designed by artist Harold Thomas and first flown in Adelaide on National Aborigines Day in July 1971. It became the official flag for the Aboriginal Tent Embassy in Canberra in 1972.

The Torres Strait Islander flag was designed by the late Bernard Namok. Adopted in 1992, it was the winning entry in a design competition run by the Island Coordinating Council.