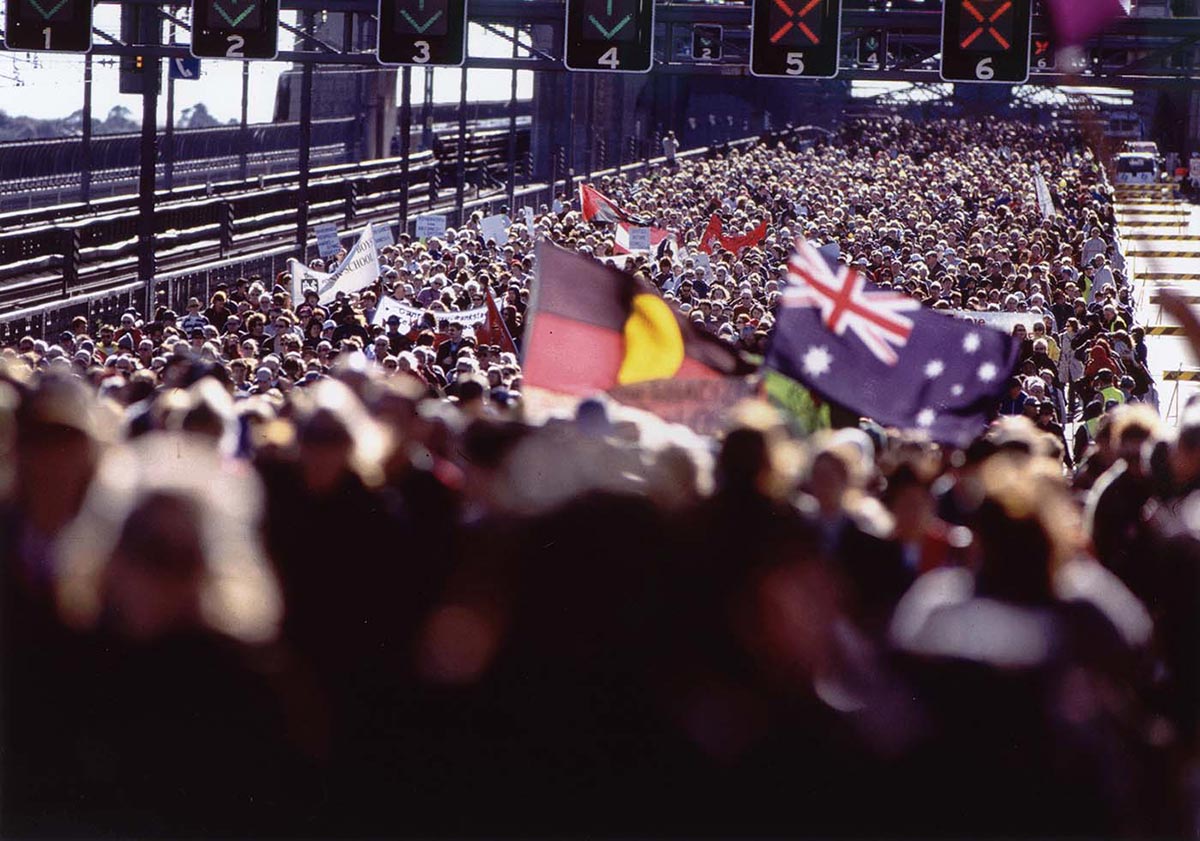 Sydney Harbour Bridge during the Walk for Reconciliation, Corroboree 2000, with the First Nations flag flying beside the Australian flag

The Bridge Walk for Reconciliation and similar events that took place around Australia in the weeks following were collectively the biggest demonstration of public support for a cause that has ever taken place in Australia.

The march was a public expression of support for meaningful reconciliation between Australia’s Indigenous and non-Indigenous peoples.

All of us who are convinced of the rightness and urgency of the cause of Aboriginal reconciliation will be most effective and most persuasive if we have the strength and the wisdom to speak more quietly, more tolerantly and more constructively to our fellow Australians who are yet to be convinced.

In September 1991 the Australian Parliament passed an Act creating the Council for Aboriginal Reconciliation. The central purpose of the Council was to guide the reconciliation process over the rest of the decade, leading up to the anniversary of Federation in 2001.

The Council’s aims were to improve relations between Indigenous and non-Indigenous Australians through increased understanding of Indigenous cultures, the history of past dispossession and present-day disadvantage, and to foster a national commitment to addressing these disadvantages.

The 1990s proved to be hugely significant in terms of progress towards reconciliation.

In 1992 the High Court handed down the Mabo decision, which rejected the doctrine that Australia was terra nullius (land belonging to no one) at the time of European settlement.

In 1993 parliament consolidated the Mabo ruling by passing the Native Title Act, which sought to provide a national system for the recognition and protection of native title and for its co-existence with the national land management system.

In 1996 the High Court handed down the Wik decision, which confirmed that native title rights could coexist with pastoral and leasehold tenures but that pastoral leases do not necessarily extinguish native title. 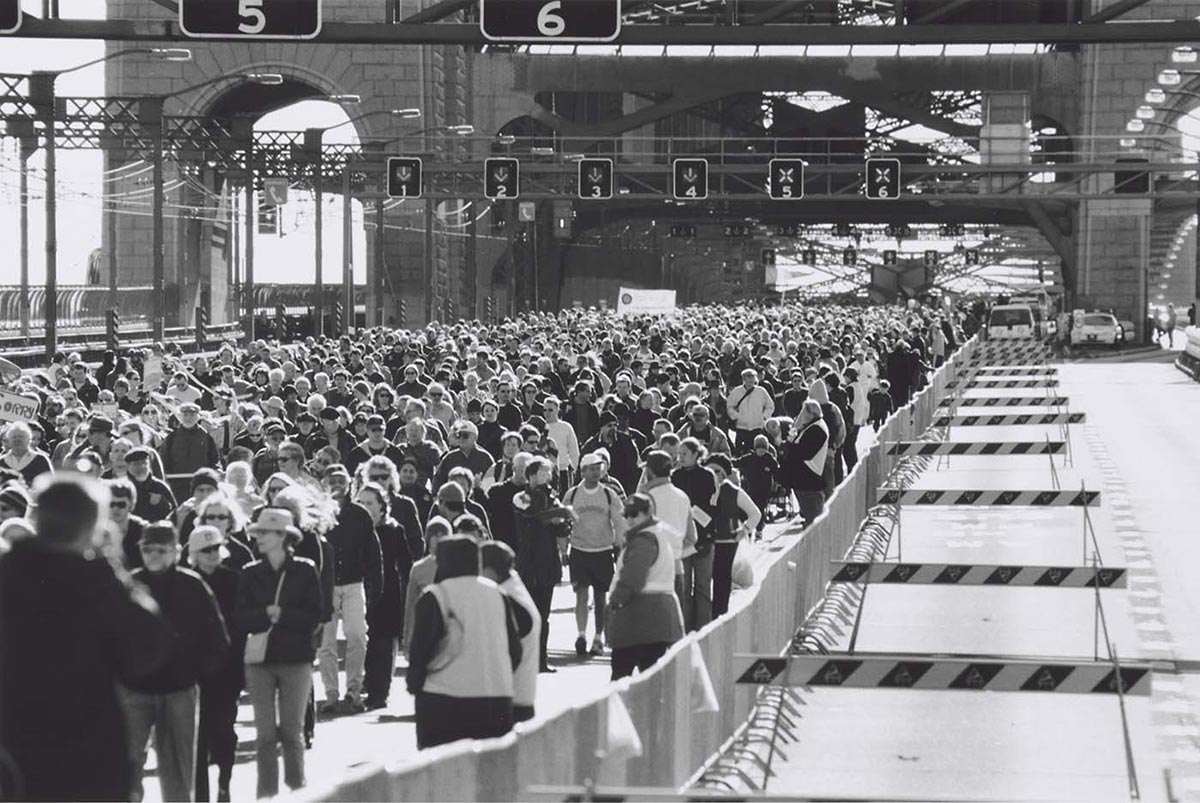 Huge crowd on Sydney Harbour Bridge during the Walk for Reconciliation, Corroboree 2000

In 1997 the Human Rights and Equal Opportunity Commission published the Bringing them Home report, which revealed the horrifying extent and legacy of Australia’s past policies of removing Indigenous children from their parents. These people are known as the Stolen Generations.

The report’s recommendations included that the Australian Government make an apology to Indigenous people and in particular the Stolen Generations. This issue was to be central to Corroboree 2000, the two-day event that was the culmination of the Council for Aboriginal Reconciliation’s work.

Corroboree 2000 comprised two events over two days. The first was a meeting of dozens of high-profile Indigenous and non-Indigenous leaders at the Sydney Opera House on 27 May 2000. This meeting was described as ‘a ceremonial gathering of Australians to exchange commitments in the lead up to the centenary of Federation in 2001’.

The meeting revolved around the presentation of two documents prepared by the Council to non-Indigenous leaders, including the state premiers, the Governor-General Sir William Deane and Prime Minister John Howard.

One was the Australian Declaration Towards Reconciliation; the other was the Roadmap for Reconciliation. The essence of the declaration is conveyed in its final paragraph:

Our hope is for a united Australia that respects this land of ours; values the Aboriginal and Torres Strait Islander heritage; and provides justice and equity for all.

Our hope is for a united Australia that respects this land of ours; values the Aboriginal and Torres Strait Islander heritage; and provides justice and equity for all.

All the leaders who took part left their handprints on a reconciliation canvas – a symbolic act of great significance in Indigenous traditions.

Many of the leaders gave speeches to the 2,000-strong audience. The most significant was delivered by the Prime Minister, who skirted around the issue of an apology by expressing ‘regret’ for past wrongs. He felt that it was not the responsibility of the present generation to apologise for past practices.

Many in the audience stood and turned their backs on Howard. Others called out, ‘Just say sorry’, echoing the heckling Howard had received at the 1997 Reconciliation Convention when he spoke of wrongdoings committed by European settlers as ‘blemishes on [Australia’s] past history’.

The second event of Corroboree 2000 was the Walk for Reconciliation across the Sydney Harbour Bridge, which took place the following day on 28 May 2000.

The Council conceived of the walk in 1995. Originally, they intended that thousands of Indigenous people would gather at one end of the bridge and a similar number of non-Indigenous people line up at the other. They would then walk towards each other and meet in the middle.

But not everyone involved was comfortable with separating the participants into two such distinct groups.

The solution came in the title of the council's own quarterly journal: Walking Together. They decided instead that everyone should start at the north end of the bridge and walk in the same direction towards Darling Harbour where a free public concert would be held.

The symbolic and iconic status of Sydney Harbour Bridge made it an obvious location for a public act of support for reconciliation.

Days before the event, the Council for Aboriginal Reconciliation was still expecting a relatively low turnout. One organiser, Shelley Reys, said later, 'It happened at a time of political turmoil and we thought it could go either way. I thought at least we'd get a few hundred [people]’.

In fact, about 250,000 people, Indigenous and non-Indigenous, made their way across the famous Sydney landmark in a continuous stream that lasted nearly six hours. It was the largest political demonstration ever held in Australia.

The numbers astonished and thrilled organisers. Evelyn Scott, chair of the Council, said on the day, ‘I’ll die happy tomorrow’.

People marched carrying banners and flowers and wearing badges and stickers. Spirits were high despite the chill wind. The Australian and Aboriginal flags flew side by side at the top of the bridge’s arch. When a skywriter wrote the word ‘Sorry’ in the clear sky above the harbour, the marchers cheered.

The bridge walk seemed to show that the Prime Minister was out of step with public sentiment, or at least that many of those who supported reconciliation were willing to make an effort to show it.

John Howard did not take part, sending in his place Aboriginal Affairs Minister, John Herron, and Minister assisting the Prime Minister for Reconciliation, Phillip Ruddock. However, several Coalition backbenchers attended as did many Labor Party frontbenchers along with NSW Premier Bob Carr.

Among the first group to cross were long-time Aboriginal and Torres Strait Islander rights activist Faith Bandler as well as Bonita Mabo, widow of native title campaigner Eddie Mabo. Many members of the Stolen Generations who attended found the bridge walk to be a healing experience.

A week later about 60,000 people walked together across the William Jolly Bridge in Brisbane. Scores of smaller walks followed throughout the country, in state capitals and regional towns, culminating in big marches in Melbourne and Perth at the end of the year.

The Melbourne walk, starting at Flinders Street Station and finishing at King's Domain gardens, drew as many as 300,000 people.

Reconciliation walk as a defining moment

The bridge walk and similar events across Australia were enormously important in showing that public sentiment was moving towards support for more concrete steps in the reconciliation process. Though the event was organised by Aboriginal people those taking part were from all sections of the Australian community.

Importantly, the walks were not a protest but a peaceful demonstration that reflected a shift in the public mood and a growing awareness of the importance of reconciliation and a need for a national apology.

When South African President Nelson Mandela visited Australia later in 2000 he said the bridge walk was evidence of a country ‘wanting to heal itself and deal with the hurt of the past’. He added that ‘leaving wounds unattended leads to them festering, and eventually causes greater injury to the body of society’.