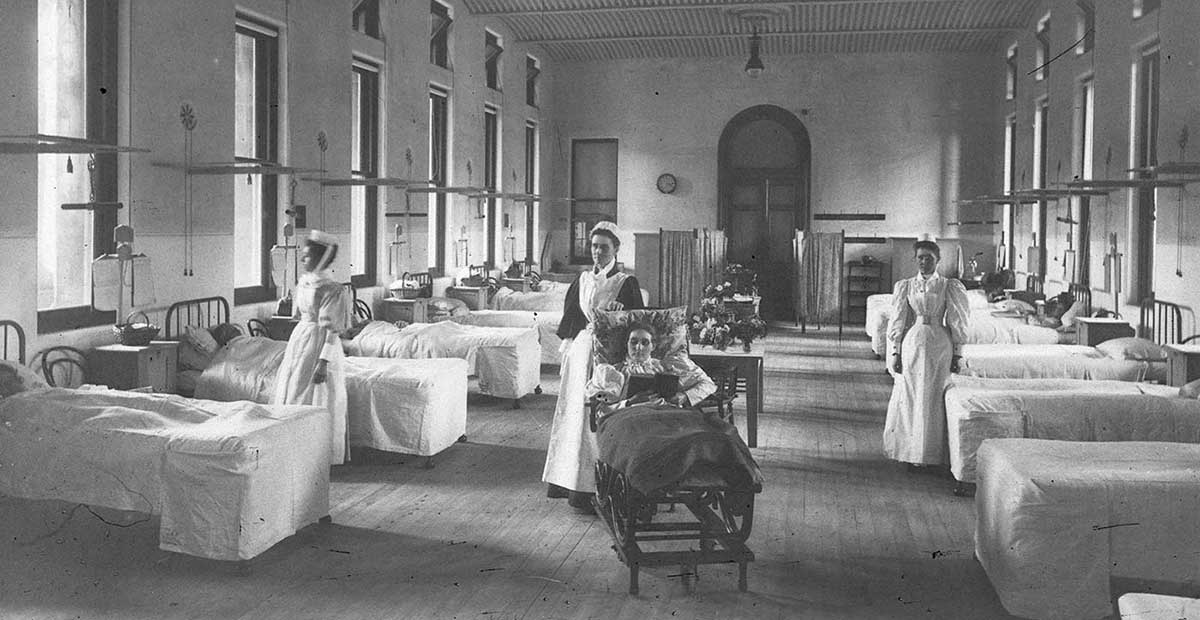 Sydney Hospital occupies the site of the first public hospital in Australia, the Rum Hospital, which opened in 1816.

In 1845 the Sydney Infirmary and Dispensary, a charity instituted the previous year to provide medical care to the poor, moved into the building.

In 1894 it was renamed Sydney Hospital.

The Sydney Infirmary is where Lucy Osburn founded modern nursing in Australia.

Rules and Regulations of the Sydney Infirmary and Dispensary, 1844:

The objects of this charity, are sick and hurt poor … but all persons who may meet with dangerous accidents requiring instant medical or surgical aid, or who labour under contagious fever, shall be admitted, with or without recommendation, at all times.

This facility was improved by the addition of a portable prefabricated building brought over with the Second Fleet.

The purpose of the hospital was to treat convicts, but medical services were also provided to the poor and, especially during the 1789 smallpox epidemic, some Aboriginal people.

In May 1810 the Governor of New South Wales, Lachlan Macquarie, called for tenders for the construction of a new general hospital.

Macquarie wanted to bring order and refinement to Sydney, and he envisaged the new hospital as an important public building. Accordingly, he approved the design of a large double-storey, colonnaded structure comprising a central building and two wings.

With no government funds to build the hospital, Macquarie contracted its construction to three entrepreneurs, D’Arcy Wentworth, Garnham Blaxcell and Alexander Riley, in return for a short-term monopoly on the distribution of 60,000 gallons of spirits. As a result, it became known as the 'Rum Hospital'.

The British Government was unimpressed when it found out, not least because Wentworth was also the colony's principal surgeon and its superintendent of police.

On 30 October 1811 Governor Macquarie laid the foundation stone for the new hospital on Macquarie Street, but shoddy construction, including structural faults in the roof, foundations and beams, delayed its opening until 1816.

Shortly after the hospital opened, its two wings were appropriated for other government purposes, including courtrooms and, from 1829 to the present day, to house the New South Wales Legislative Council (now the Parliament of New South Wales).

Despite the hospital’s impressive presence, free settlers saw it as a place of last resort, suitable only for convicts, desperate people without money, or family support and accident victims in need of emergency care.

Everyone else expected to be treated by medical practitioners in their own homes, where they could be nursed by family or servants.

The wider population did not start demanding access to hospitals until the late 1890s, when advances in anaesthesia and surgery – and greater awareness of germs and cleanliness – meant that hospitals offered better care than was possible in the home.

Caring for the colony’s poor

Unlike Britain, New South Wales did not have ‘poor laws’ or workhouses to support orphans, the poor or the mentally ill. Nor did colonial society have the customs which obliged the wealthy to help the less fortunate.

As the population grew, the perilous situation of the colony’s poor, many of whom were ex-convicts with no family in Australia, prompted some prominent colonists, including the Reverend William Cowper, to establish the country’s first charity, the Benevolent Society, in 1813, to house people in need.

However, the growing number of poor people suffering sickness and disease was beyond the capacity of the Benevolent Society, and although the Rum Hospital was supposed to admit paupers, in reality many were not eligible for free government treatment.

There was a clear need for more to be done to care for the sick poor of the colony.

In 1826 a group of leading citizens – including Alexander McLeay, the first Colonial Secretary, and William Bland, first president of the Australian Medical Association, and later a key figure in the founding of Sydney University – established the Sydney Dispensary as a charity to provide medicine and treat the poor in their own homes.

Eight medical practitioners offered to provide their services for free, and Governor Ralph Darling agreed to be the dispensary's patron. Between 1835 and 1845 the dispensary gave medical assistance to more than 14,000 people. 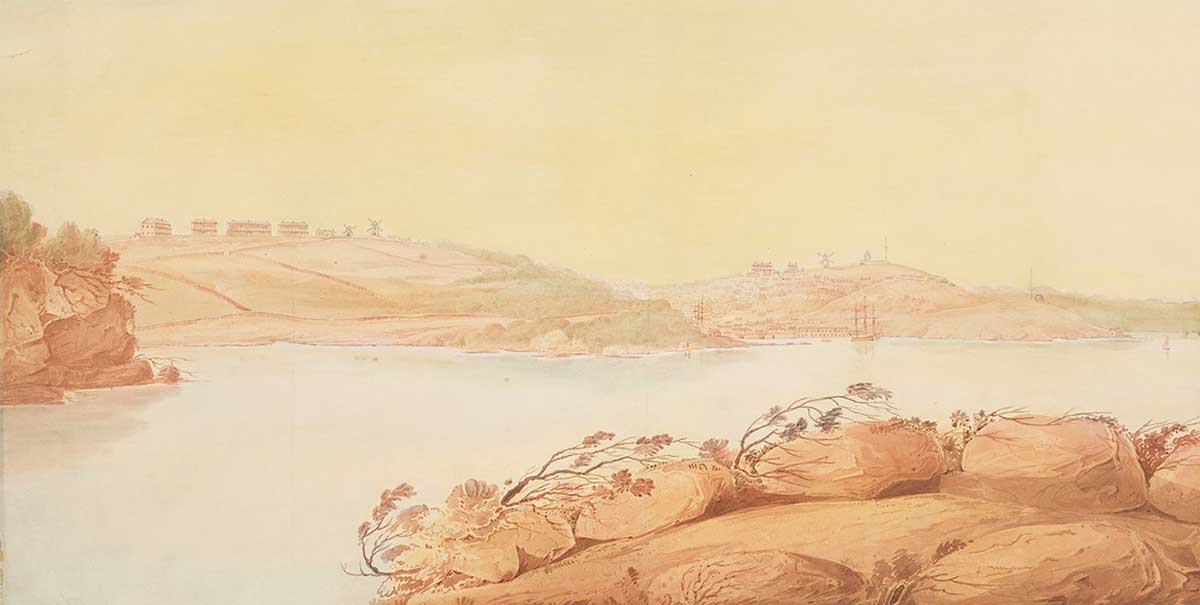 By the early 1840s the dispensary’s committee decided that Sydney needed a permanent place to treat the sick poor as inpatients.

In 1843 Governor George Gipps gave permission for an infirmary to be established in the south wing of the Rum Hospital. Two years later the Sydney Infirmary and Dispensary was recognised in law and started advertising for surgeons and physicians.

The institution was funded by subscription, which the government matched on a ‘£1 for £1’ basis. In 1841 transportation to New South Wales ended, and by 1848 the government had no need for a hospital in which to treat government-dependent patients.

The government offered the Rum Hospital’s large central building to the Sydney Infirmary, which moved in on 13 September 1848. The dispensary became the outpatient service for the infirmary.

Conditions in the hospital were chaotic, overcrowded and squalid, with wards infested with bed bugs, lice and rats.

In 1866 the scandalous state of Sydney Infirmary prompted Henry Parkes, then Colonial Secretary, to write to British nursing pioneer, Florence Nightingale, requesting that she send out trained nurses to help improve conditions.

Five probationary nurses under the supervision of Lucy Osburn, a qualified nurse in the Nightingale system, arrived at Sydney in December 1867.

Within a year Osburn had trained 16 nurses. However, she faced strong resistance from existing managers to her attempts to improve sanitary conditions and introduce hygienic practices.

In 1871 the infirmary had 230 beds servicing a population of more than 136,000 people. Overcrowding meant that many sick people were turned away.

The Macquarie-era building was condemned in newspapers for being ‘infected with hospitalism’ (at the time it was widely believed that germs could become embedded in hospital buildings, causing patients to suffer infections such as erysipelas and pyaemia).

In 1879 the government acted. It demolished the central building of the old Rum Hospital to make way for the construction of a new hospital. In November 1881 royal assent was given to the Sydney Hospital Act, and the new hospital opened with 315 beds in 1894.

Sydney Hospital and Eye Hospital remains the oldest working hospital in Australia – although it is no longer a general hospital. In tribute to the unorthodox funding arrangement which built Australia’s first hospital, Sydney Hospital’s crest includes a sea eagle perched on a rum barrel.

Sydney HospitalA postcard featuring a colour photograph of the Sydney Hospital. "SYDNEY HOSPITAL" is printed in small black text on the left hand side. One green "1/2 penny" stamp and one green "1 penny" stamp are adhered to the back. The postmark states "JY 27 / 1906". Handwritten correspondence begins "Many Happy returns ...." and is add...

A History of Medical Administration in NSW, NSW Health

More Than Just a Union: A History of the AMA, Australian Medical Association

Sydney Hospital and Eye Hospital, The Dictionary of Sydney