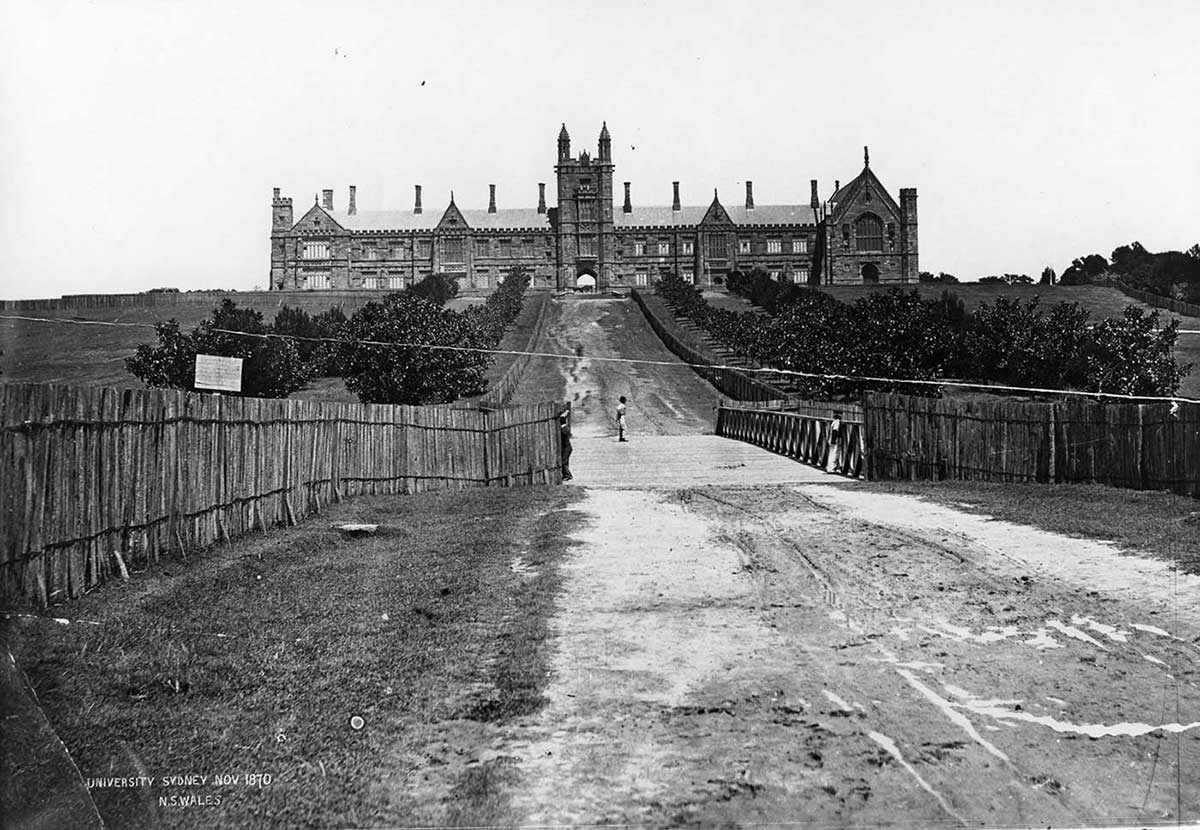 The University of Sydney was Australia’s first university and among the first public, non-denominational and secular universities in the British Empire.

In 1881 it admitted female students on an equal basis with men, one of the first universities in the world to do so.

… it is deemed expedient for the better advancement of religion and morality, and the promotion of useful knowledge, to hold forth to all classes and denominations of Her Majesty’s subjects resident in the Colony of New South Wales, without any distinction whatsoever, an encouragement of pursuing a regular and liberal course of education …

The need for higher education

For the first several decades of settlement, young Australian colonists who wanted a secondary or university education, had to travel to Britain, Europe or North America.

This involved a lengthy and often hazardous journey, a long period of separation from families and expenses that were beyond the means of most settlers.

As the colony of New South Wales developed an independent resource-based economy and its population grew, demand for a more highly educated workforce also increased.

Engineers and other professionals were needed to develop infrastructure while the move to self-government, begun with the New South Wales Act 1823, required highly educated people to establish and administer government institutions.

From the 1830s, some influential colonists began establishing private post-elementary colleges in an effort to meet the colony's demand for an educated workforce.

In 1831 the political campaigner, Presbyterian clergyman John Dunmore Lang, set up the Australian College as an institute for higher learning. This college offered a curriculum based on a Scottish model that included classical, practical and technical subjects. The college operated, on and off until 1854.

In 1835 a group of religious dissenters established the non-denominational Sydney College for the secular secondary education of the sons of wealthy merchants. On its governing council was the landowner and explorer, William Charles Wentworth, an ardent supporter of non-religious education.

When Sydney College was at the point of collapse following the 1840s economic depression, its proprietors petitioned the colonial government to take it over and convert it into a university.

Although this specific proposal was not adopted by the government, the failure of Sydney College and other private colleges helped to focus political attention on the idea of establishing a secular, publicly-funded university for Sydney. 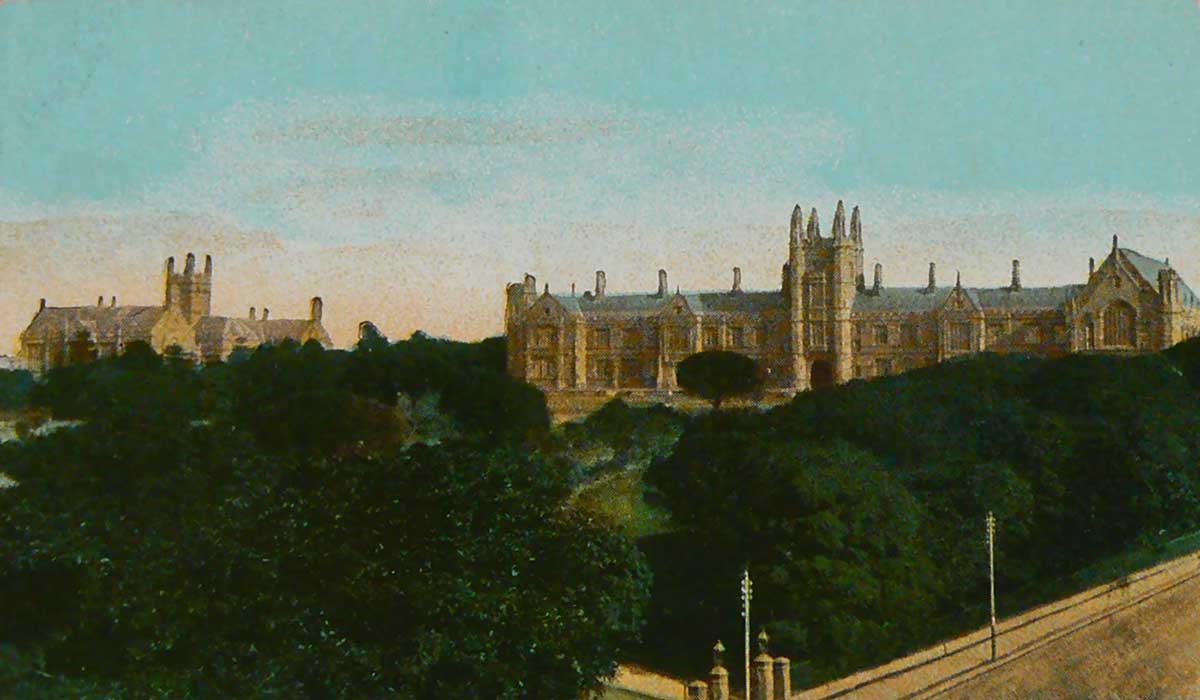 A university for Sydney

On 6 September 1849 Wentworth, a member of the New South Wales Legislative Council, successfully moved that the Council appoint a Select Committee to ‘report upon the best means for instituting a University for the promotion of literature and science, to be endowed at the public expense'.

The committee’s subsequent report recommended ‘Founding [a university] without any further delay upon a liberal and comprehensive basis… which shall be accessible to all classes, and to all collegiate or academical institutions which shall seek its affiliation'.

Wentworth and like-minded colonists championed access to the proposed university on the basis of academic merit established through written examination rather than on the basis of a student’s religious affiliation or social status.

A secular and public university

From the beginning, religious organisations disputed the notion of a secular university, pointing to Oxford and Cambridge as models to which an Australian university should aspire.

However, supporters of secular education pointed to another example: the University of London, founded in 1836, explicitly excluded religious qualification as an entry requirement.

On 2 October 1849 a Bill to incorporate and endow the University of Sydney was introduced to the Legislative Council but was lost because of disagreement about the composition of the university’s governing senate.

The Bill had excluded clergy from sitting on the senate while appearing to open the way for freed convicts (‘emancipists’) to become members by including on a list of nominees, William Bland, past president of Sydney College, who had been transported for duelling.

Political debate continued until a compromise was reached that the main Christian denominations could be represented on the 16-member senate by a maximum of four representatives and the Bill was redrafted accordingly. No list of proposed senate members accompanied the new Bill.

The Bill was introduced to the Legislative Council in August 1850 and the following month the University of Sydney Act was passed. It received Governor Sir Charles FitzRoy’s assent on 1 October 1850. Among the first senate members announced in the Governor’s proclamation were three ministers of religion and W C Wentworth.

Sydney University was opened to students on 11 October 1852 with Reverend Dr John Woolley as its foundation Principal. Eighteen scholarships were funded for students who could not afford fees.

The university was first located in the former Sydney College building. Some five years later, the university began teaching from new buildings constructed on 128 acres at Grose Farm, west of Sydney.

Its first curriculum included the classics, sciences and mathematics, as well as ‘modern’ subjects French, German and political philosophy. Professional faculties of Medicine, Engineering and Law were soon established. The first degrees were awarded in 1856.

In 1881 the university senate agreed that women should be admitted on the same footing as men.

The following year, when the first women, Mary Brown and Isola Thompson, began their Bachelor of Arts studies, they attended the same classes as male students. Both graduated in May 1885.

The university’s medical school admitted the first women students in any Australian university in 1884. By 1920, 131 women were enrolled to study medicine.

Our story, University of Sydney

The Australian Idea of a University, Meanjin Quarterly