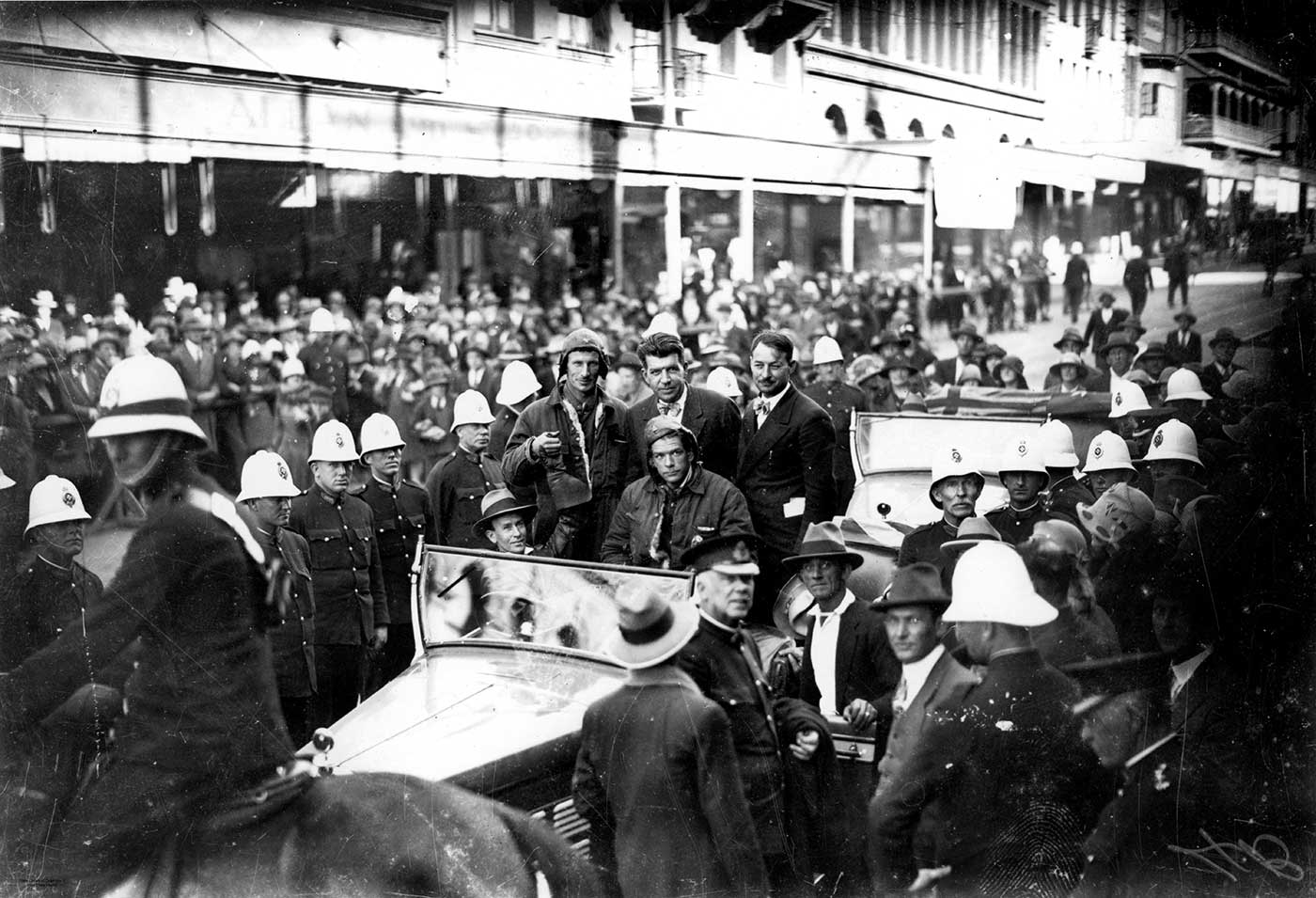 In 1928 Australian pilots Charles Kingsford Smith and Charles Ulm, along with two US crewmen, became the first people to cross the Pacific Ocean by air in their three-engine Fokker aircraft, the Southern Cross.

[Charles] Ulm … had similar ideas to mine. He was ambitious; he wanted to do something which would make the world sit up … We began to talk of some Big Feat which would bring us what we wanted, fame, money, status.

The 1920s and 1930s were the golden age of record-breaking flights.

Many people believed that aircraft would play an integral role in Australia’s future. However, crashes, fatalities and high costs meant that aviation was slow to realise its full potential.

During the First World War, Charles Kingsford Smith, known as ‘Smithy’, served in the Australian Imperial Force before transferring to the Royal Flying Corps. He was awarded the Military Cross for bravery after being badly wounded in one dogfight.

Throughout the 1920s he worked as a bush pilot and established a small airline with two colleagues, Keith Anderson and Bob Hitchcock.

The idea for the transpacific flight struck Smithy soon after the war. However, it wasn’t until he met Charles Ulm in 1928 that he began to think seriously of turning it into a reality.

Ulm had also served in the war but only met Kingsford Smith when he approached him, Anderson and Hitchcock about setting up a mail service between Adelaide and Perth.

Although Ulm wasn’t a licensed pilot, he was an aviation enthusiast, and Ulm was soon infected by Smithy’s desire to cross the Pacific. They were the perfect partnership. Ulm was a superb organiser and fundraiser, whereas Smithy was a brilliant pilot.

Kingsford Smith was described by fellow Australian aviator Patrick Gordon Taylor as having both the imagination and steadiness of nerve needed to deal with any situation. 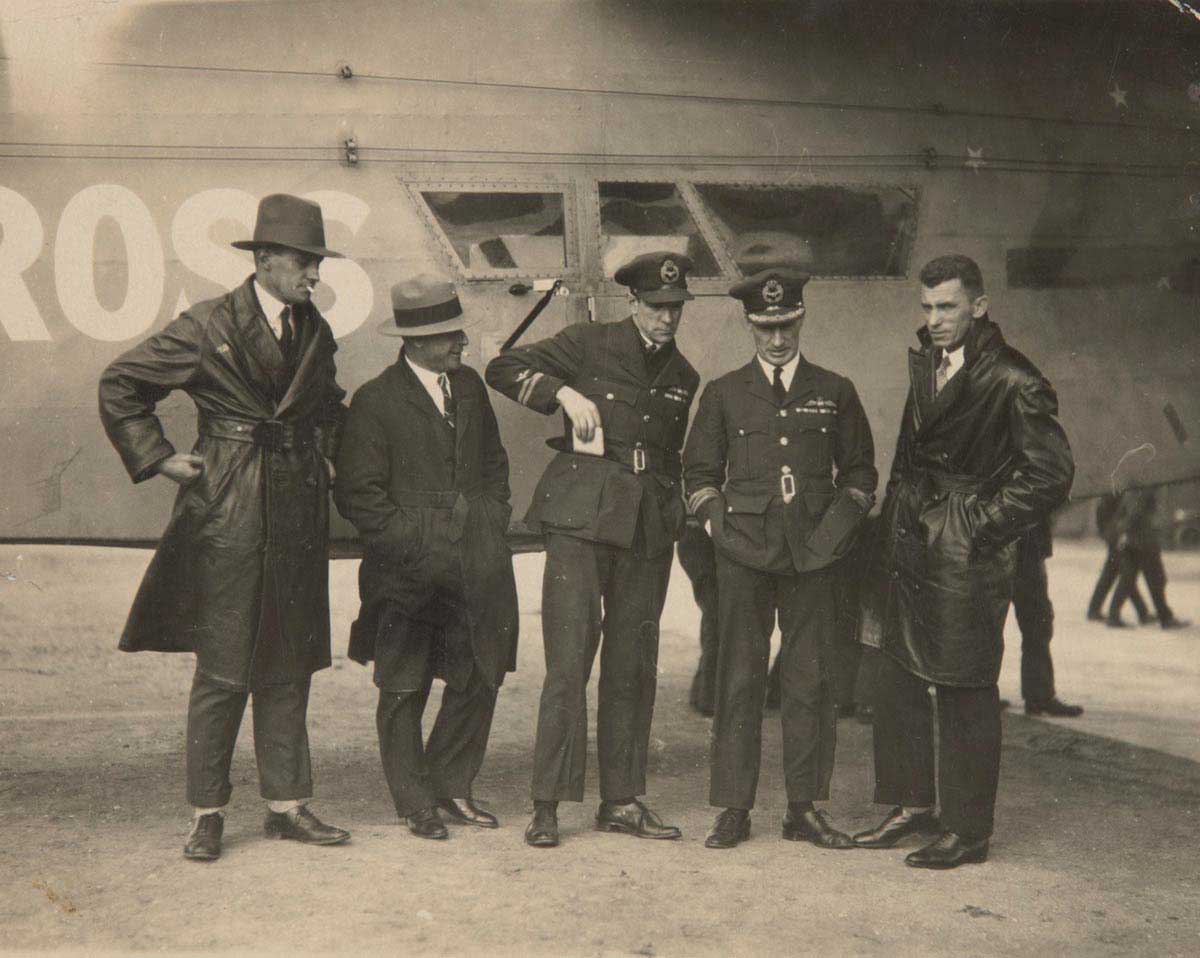 To raise money and garner publicity, Smithy and Ulm made a record-breaking flight around Australia in June 1927. They completed it in 10 days – less than half the previous record.

The feat made them celebrities and enabled them to raise most of the necessary funds. It also cemented Ulm’s place as co-pilot for the transpacific flight, much to the dismay of Anderson, who had expected to fill the role.

A transpacific flight was widely thought to be impossible – no plane existed with the requisite range. Aerial navigation was also in its infancy and this was a critical issue when flying long distances over the ocean.

Kingsford Smith and Ulm planned to complete the crossing in three long hops: California–Hawaii, Hawaii–Fiji, Fiji–Brisbane. If they missed Hawaii or Fiji, they would run out of fuel and crash.

Kingsford Smith travelled to the United States, where he bought a three-engined Fokker monoplane. He named it the Southern Cross. It had room for multiple fuel tanks, a co-pilot, a navigator and a radio operator.

Kingsford Smith and Ulm faced various financial and regulatory hurdles which were only overcome with support from the New South Wales Government, and from wealthy individuals in Australia and the United States.

They hired two Americans to accompany them: navigator Harry Lyon and radio operator James Warner. Ulm forced both to sign contracts that denied them a meaningful share of any riches that might eventuate.

On 31 May 1928 Kingsford Smith and Ulm set off from Oakland airfield outside San Francisco.

To lighten the load, they sat on wicker chairs that were not bolted to the floor. They did not have seatbelts, and there was no toilet.

At altitude, the cabin and cockpit were freezing as the fuselage was made of thin fabric. Unfortunately Lyon and Warner had neglected to bring any warm clothing.

The noise of the engines was so deafening that Lyon and Warner could only communicate with the pilots by writing on scraps of paper passed to them on the end of a stick.

During the flight they hit a series of storms, forcing Kingsford Smith to fly ‘blind’, just using instruments – a practice that was then only in its infancy. Controlling the heavy aircraft in such conditions was physically demanding.

On the final leg, they encountered severe storms and turbulence. The windshield leaked, and the pilots were soaked in freezing water. Fuel consumption was a constant worry.

Warner kept the world apprised of their progress by Morse code. In Australia, these messages were read out over the radio to a rapt public.

The 11,585-kilometre trip took 83 hours and 38 minutes. The 5042-kilometre Hawaii–Fiji leg was the longest transoceanic flight so far made.

When the Southern Cross touched down at Eagle Farm Aerodrome in Brisbane, there were 15,000 people waiting for it. Spectators carried the crew to waiting cars.

About 30,000 people lined the route to Brisbane Town Hall. The crew then flew to Sydney, Melbourne and Canberra, where tens of thousands also awaited them.

Smithy and Ulm continued to achieve firsts and break records.

These included flying nonstop across Australia, from Australia to New Zealand, and from Australia to England. From England, they flew east to west across the Atlantic and on to Oakland, roughly following the equator. They were the first people to fly round the world.

Kingsford Smith also flew west to east across the Pacific. However the strain of the constant daredevil flights exacted a toll on Smithy’s mental and physical health. He began to get panic attacks, especially over long stretches of open water.

Both Kingsford Smith and Ulm died in tragic circumstances. Ulm was killed in December 1934 when his plane disappeared near Hawaii. Smithy died when his plane crashed off the coast of Burma in November 1935.

Smithy was considered by many aviators to be the finest, most daring pilot in the world. He was an object of intense national pride for all Australians.

Kingsford Smith and Ulm showed that regular mail and passenger air services were possible. Their record-breaking flights and international celebrity status stimulated interest in aviation in Australia and around the world.

Sydney’s airport is named after Kingsford Smith. The Southern Cross is on display at Brisbane airport.

Joy flights, feats and disasters: A journey through 1920s and 1930s aviation in the National Historical Collection

Charles Ulm's leather attache case with an attached shipping labelThis attache case was used by Charles Ulm from 1928 until 1934, including his preparations for the 'Southern Cross' trans-Pacific and trans-Tasman flights, and his Australian-England and Australian-New Zealand flights in 'Faith in Australia'. The shipping label on the back of the case is inscribed "Olympic/5th October 1934/New ...