Pioneering Australian aviators Charles Ulm and Charles Kingsford Smith completed the first flight across the Pacific Ocean. Ulm set several of his own flight records, before disappearing while flying from San Francisco to Hawaii in 1934.

Charles Ulm was born in Melbourne on 18 October 1898. At the age of 16, Ulm enlisted in the Australian Imperial Force (AIF) under the name Charles Jackson, stating his age was 20 years.

He was wounded at Gallipoli in April 1915, returned to Australia and was discharged as a minor.

Ulm re-enlisted with the AIF under his own name in 1917. He served on the Western Front until he was wounded in 1918 and demobilised in 1919.

Ulm returned to Australia after the First World War with an interest in commercial aviation. He supported several short-lived aviation companies, including Interstate Flying Services with Keith Anderson and Charles Kingsford Smith.

The men aimed to fly across the Pacific Ocean. Ulm and Kingsford Smith decided to fly around Australia to gain publicity and support for their venture.

In June 1927 Ulm and Kingsford Smith completed the journey in 10 days, five hours and 30 minutes; smashing the 1924 record of 22 days, set by Captain EJ Jones and Colonel H Brinsmead.

In August 1927 Ulm, Kingsford Smith and Anderson travelled to California, seeking an aircraft and further sponsorship for their transpacific flight. The team settled on a Fokker aircraft after Australian explorer Sir George Hubert Wilkins offered one of a pair of aircraft he had purchased, but found unsuitable, for his Arctic expeditions.

The Boeing Aircraft Factory assisted with alterations to the Fokker, including the installation of three Wright Whirlwind engines and extra fuel tanks. The plane was re-named Southern Cross. Anderson went to Hawaii to find landing grounds for the first stop of the journey and Ulm sought the best radio and navigational equipment.

As the workload increased, the departure date was delayed and costs escalated. A grant from the New South Wales government and backing from businessman Sidney Myer and the Vacuum Oil Company helped but by March 1928, the men's finances were exhausted and they were faced with selling the Southern Cross and abandoning their plans. 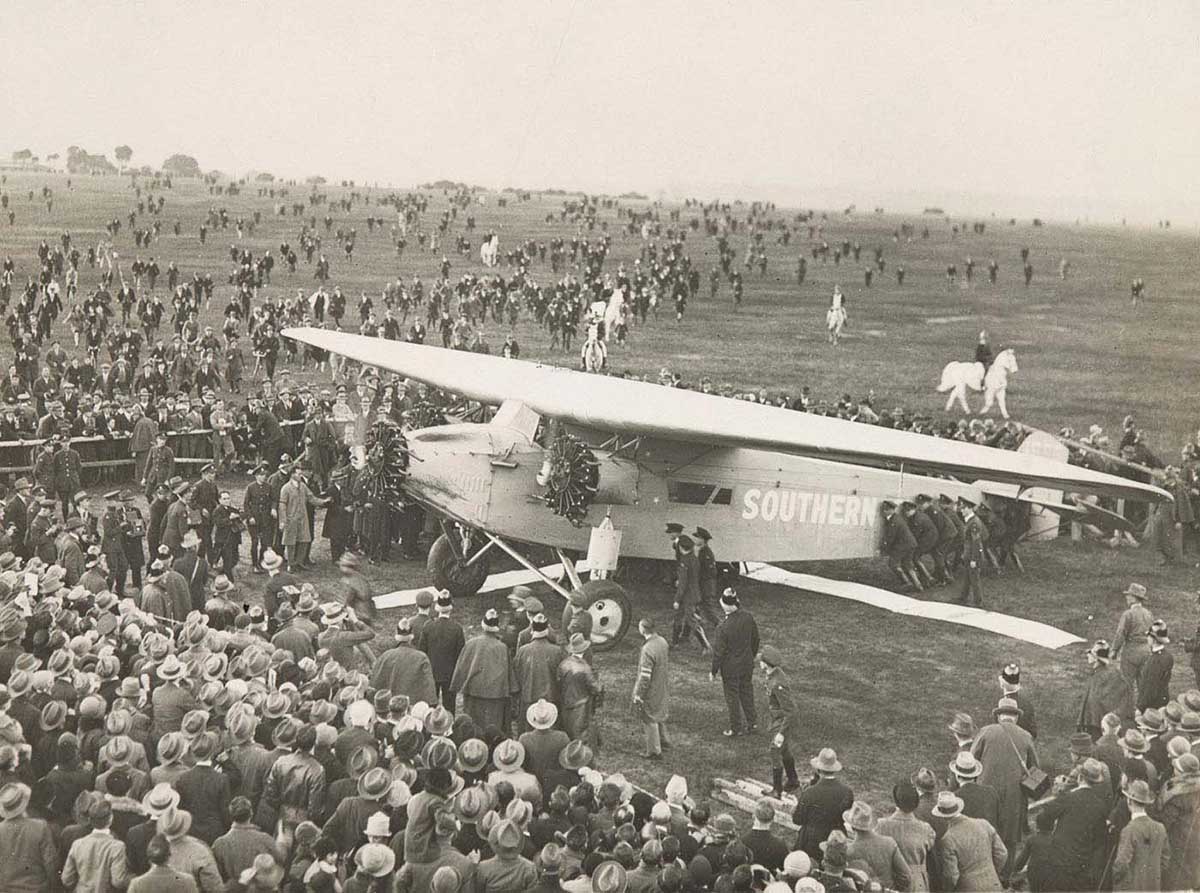 Southern Cross arriving at Essendon aerodrome on 13 June 1928, on a tour following the transpacific flight

Across the Pacific Ocean

On 31 May 1928 Southern Cross took off from Oaklands, California, with Kingsford Smith as pilot and Ulm co-pilot. They were accompanied by American crew members Harry Lyon and James Warner, skilled in the operation of the navigational and radio equipment that was essential to the success of the flight.

After flying blind through huge banks of cloud, Southern Cross and crew arrived at Wheeler Field, near Honolulu, exhausted and temporarily deafened from the noise of the engines. They spent a day checking the aircraft and revising navigation plans, before leaving early on 3 June for the next leg of their journey, from Hawaii to Fiji.

During the 5042 kilometre (3133 mile) flight from Oahu to Suva, the aviators faced radio problems, storms, a suspected fuel leak and constant concern about fuel consumption. When they landed at Albert Park in Suva on 5 June 1928 they had completed what was the then longest flight across water.

Albert Park was unsuitable for taking off with the Southern Cross fully loaded, so the aviators sent Warner and Lyon, their supplies and fuel separately by ship to nearby Naselai Beach, where they started the final leg of their journey.

The final leg of the journey took Ulm and Kingsford Smith through some of their most treacherous conditions, with constant storms hammering the aircraft.

The Southern Cross and crew arrived at Eagle Farm, Brisbane on 9 June 1928, having completed the 11,585 kilometre crossing in 83 hours, 38 minutes of flying time.

Ulm and Kingsford Smith were instant celebrities. They were entertained and congratulated by political, community and business leaders at many events held in their honour.

Thousands of fans greeted them in Brisbane and the following day at Mascot in Sydney, before they flew to Melbourne, and then on to Canberra.

On 15 June 1928 Kingsford Smith, Ulm, Lyon and Warner were entertained at Parliament House in Canberra. Prime Minister Stanley Bruce presented them with a £5000 cheque from the people of Australia.

Across the Tasman Sea

Ulm and Kingsford Smith were quick to plan further flights. In August 1928 they made the first non-stop flight across Australia, from Melbourne to Perth, with new crew members, wireless operator Harold Litchfield and navigator Tom H McWilliams.

The same crew then began planning for a flight from Australia to New Zealand for the first successful crossing of the Tasman Sea. Excitement surrounding their achievements was tarnished somewhat when former partner Keith Anderson claimed a share of the Southern Cross and gifts received by Ulm and Kingsford Smith, in unsuccessful legal action.

The Southern Cross was overhauled at Richmond aerodrome in Melbourne. Wright Aeronautical Corporation engineer Cecil ‘Doc’ Maidment, who had serviced the Southern Cross engines prior to the transpacific flight, arrived from America to assist.

The trans-Tasman flight was delayed by bad weather. Amid public criticism about the delays, Kingsford Smith described the reasons for their caution:

The bad weather and the fierce gales which assail [the Tasman Sea] are notorious; it is a comparatively deserted stretch of ocean where one can expect no help, and the loss of two gallant lives, namely, Hood and Moncrieff, who had previously met their death in a brave attempt to span the sea, confirmed me in my resolve to take no risks.

At sunset on 10 September 1928 the Southern Cross and crew departed Richmond. They encountered difficult weather conditions and the aircraft was struck by lightning, but the crew completed the first trans-Tasman flight, landing at Wigram aerodrome in Christchurch, New Zealand early on 11 September.

Continued bad weather hampered plans for further flights in New Zealand. Ulm took the opportunity to complete a series of solo flights and gain his pilot’s licence, a feat that had been hampered by treatment for wounds sustained during the war.

Other aviators honoured at the ceremony included Wing-Commander Lawrence Wackett, who became a leader in the Australian aviation industry, and Squadron-Leader Garnet Malley.

Malley was commissioned as a pilot in the Australian Flying Corps in 1917. After the war, he toured regional Australia promoting the Peace Loan, then worked at his family’s manufacturing company in Sydney.

In 1928 Malley was appointed leader of No.2 Squadron, based at Richmond aerodrome. He was commanding the unit when Southern Cross was overhauled at Richmond in 1928 and 1929.

Australian National Airways offered flights in eastern Australia until 1931. The company folded in 1933.

In 1928 Malley was appointed leader of No.2 Squadron, based at Richmond aerodrome. He was commanding the unit when Southern Cross was overhauled at Richmond in 1928 and 1929. Malley also worked as a specialist flying consultant to Kingsford Smith and Ulm’s airline, Australian National Airways.

In 1933 Ulm purchased an Australian National Airways Avro X aircraft and renamed it Faith in Australia. A new wing, Wright Whirlwind engines and long-range fuel tanks were fitted and the fuselage was strengthened. Ulm hoped to secure an overseas airmail contract and planned to fly around the world to prove the viability of regular commercial air services.

With Scotty Allan and Patrick Gordon (Bill) Taylor as crew, Ulm piloted Faith in Australia from Richmond aerodrome on 21 June, hoping to reach England in record time. After making good progress to Singapore, engine troubles and a boggy aerodrome at Rangoon delayed the journey.

Faith in Australia and crew arrived at Heston aerodrome, west of London, on 10 July 1933. They immediately began preparations for the next flight, across the Atlantic Ocean.

Securing the services of wireless operator John Edwards; Ulm, Allan and Taylor left Heston aerodrome on 24 July, stopping near Dublin at Baldonnel aerodrome and then Portmarnock Beach, where the aircraft sunk in the sand and was damaged. Wakefield Oil Company founder Lord Charles Wakefield covered the costs of repair.

On 13 October 1933 the men left Feltham aerodrome, near London, and flew to Australia via Athens, Baghdad, Karachi, Calcutta, Sittwe (Akyab), Alor Setar (Alor Star) and Surabaya. Faith in Australia landed at Derby, Western Australia on 19 October, completing the journey in a new record time of 6 days, 17 hours and 56 minutes. 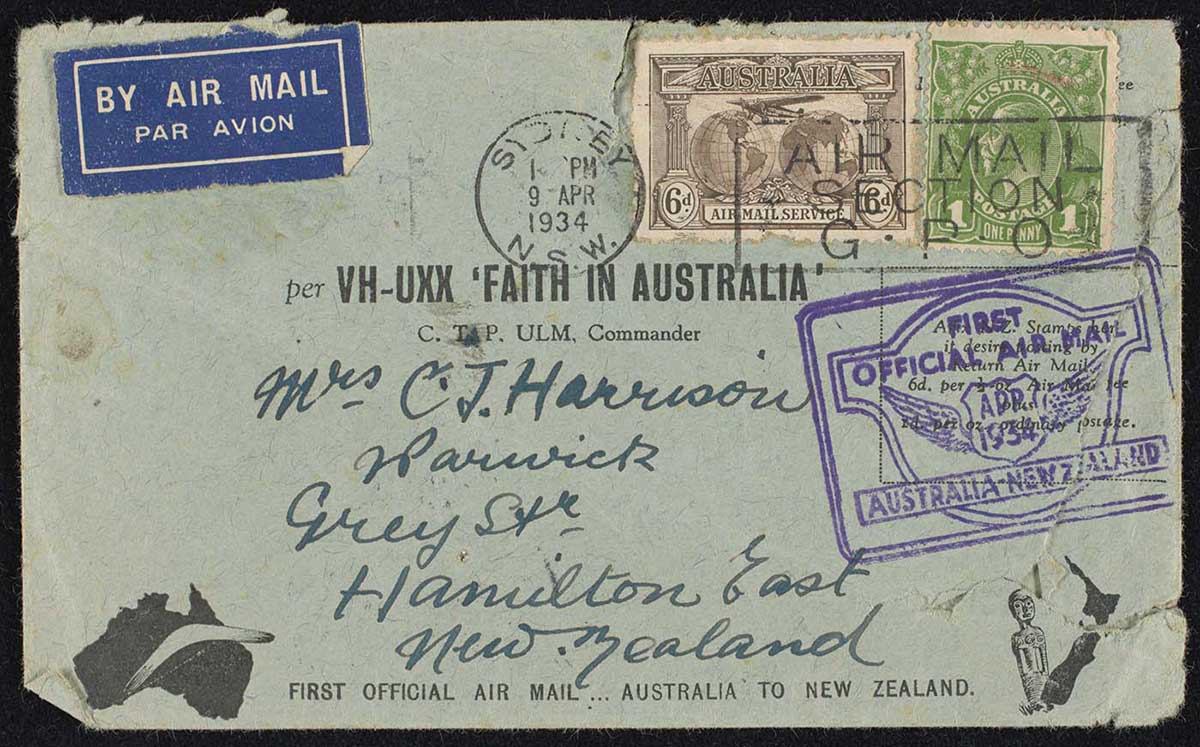 Envelope carried on first official airmail flight between Australia and New Zealand, 1934, on board Faith in Australia

On 3 December 1933 Ulm piloted Faith in Australia out of Richmond to Plymouth, New Zealand, carrying his wife Jo and secretary Ellen Rogers as passengers. After a successful landing on 4 December, Jo Ulm and Rogers became the first women to fly across the Tasman Sea.

Charles Ulm stayed in New Zealand for several weeks, promoting the benefits of aviation. He carried the first official airmail from Auckland to Invercargill, and conducted joy flights in numerous towns.

The commemorative box in the Museum's collection was a gift for Lord Charles Wakefield, commissioned by Roslyn Foster Bowie Philp, who worked in the 1920s for the Wakefield Oil Company, and was later appointed a judge in the Supreme Court of Queensland.

The box presented to Lord Wakefield carried 25 special edition flight covers addressed to Wakefield Castrol Oil Products distributors. Wakefield took a strong interest in aviation and worked with researchers to develop 'Castrol', named for the castor and vegetable oil from which it was made.

The box and flight covers were held in the Wakefield collection until Castrol was purchased by BP in 2000. It was bought by the Museum from a collector. 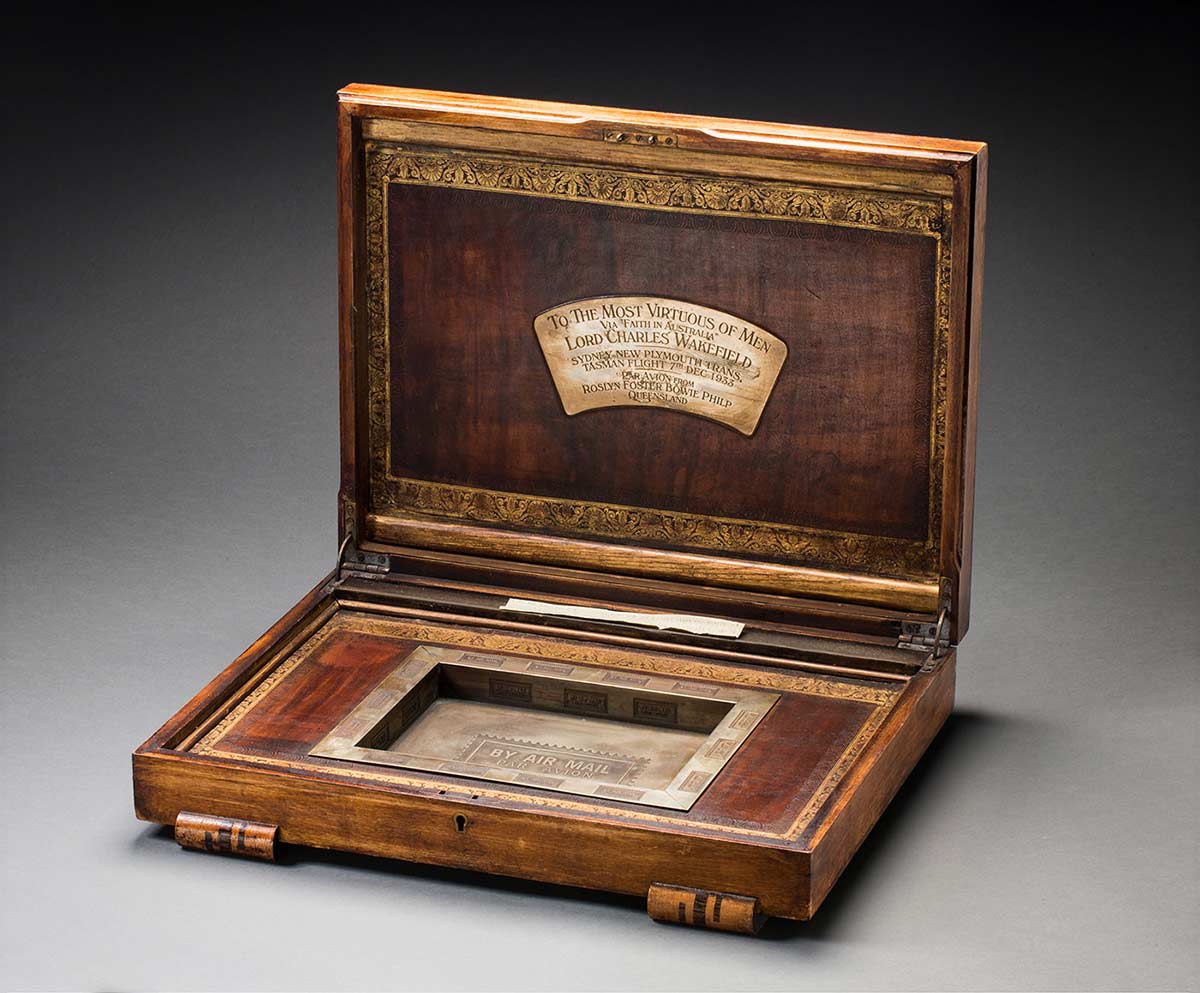 In September 1934 Ulm established a new company, Great Pacific Airways, to operate an air service between San Francisco and Sydney. He purchased a twin-engine Airspeed Envoy for the venture and named it Stella Australis.

Ulm travelled to England by steamship to take receipt of the new aircraft, which was shipped to Canada on completion. On 3 December 1934 Ulm and crew, George Littlejohn and J Leon Skilling, left Oakland, California, on a test flight to Honolulu. They failed to reach Wheeler Field, disappearing without trace in the Pacific Ocean.

An extensive search carried out by the United States naval and military commands ended after a month.

John Ulm is the only child of Charles Ulm and his first wife, Isabel (nee Winter). He was 13 years old when his father died. After completing his education at Sydney Grammar School, Ulm worked as a copy boy with the Sydney Sun newspaper. He served as a RAAF spitfire pilot during the Second World War, resuming his work with the Sun as a journalist after the war.

In the mid-1950s Ulm worked for Qantas and founded the company’s Press and Information Department. In 1958 he organised celebrations surrounding the 30th anniversary of the transpacific flight.

Since retiring in 1977 Ulm has continued to commemorate the life of his late father. John Ulm generously donated his father’s RAAF cane and investiture ceremony photograph to the National Museum in 2014.

Joy flights, feats and disasters: A journey through 1920s and 1930s aviation in the National Historical Collection

Curator Jennifer Wilson shares the stories of some rarely-seen aviation objects, from plane parts to photos, to illustrate the realities and romanticism of the foundation-era of Australian aviation.
Open player in a new tab
Presenters: Jennifer Wilson, with an introduction by Kirsten Wehner
Tags:
00:00 / 67:17