Listening to Country: The inseparable links between family and Dreaming on the ‘Canning Stock Road’ (part six)

What I'm doing on the project really is making sure what you mob say or do is the right way that we feel is culturally appropriate, not the wrong way. Like getting stories from some people, sometimes they don't like telling [certain] stories [publicly] ... My job is to make sure that everything is working smooth, following that one line, not turning off and any way. 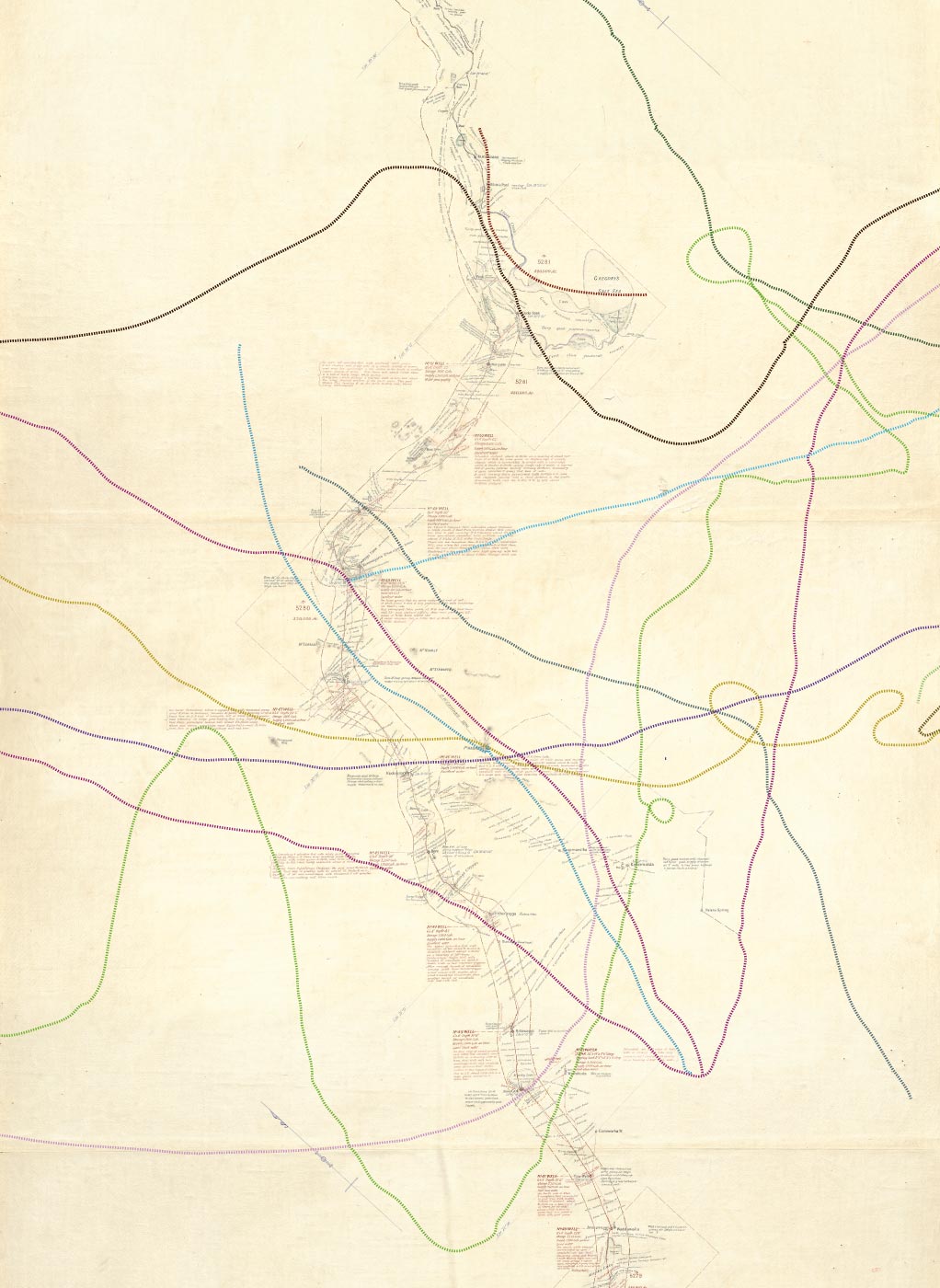 The Dreaming map is based on work by Kim Akerman in the 1980s, showing multiple sites and songlines that would restrict mineral exploration in and around the northern end of the Canning Stock Route, adapted with input from Daniel Aime Vachon and Putuparri Tom Lawford.

The stock route's path interrupted many of these songlines, including the small sample shown in the map of its northernmost end. The stories of some of these Dreaming tracks are represented in the paintings of the Canning Stock Route collection, but they portray only 'easy stories' from the epic song cycles they describe.

These stories contain no restricted information; however, for those who know their full meaning, they both allude to and protect deeper levels of knowledge. So sacred is this knowledge that even naming the songlines on the Dreaming map would be to reveal information considered 'too deep' for public consumption.

The stories within the Canning Stock Route collection are powerful, not only because they bear witness to hidden histories but also because of the ways in which they are told, and by whom.

During the same period that Aboriginal people's stories were being sequestered from mainstream history, sensitive sacred knowledge, relating to men's and women's business, to ceremonial and initiatory practices, and to collectively owned cultural knowledge, has been published and publicly exploited by some non-Indigenous people without the consent of its custodians.

Serious violations of this kind have convinced communities of the need to protect their secret knowledge with great vigilance.

This Dreaming map, and other culturally significant materials produced on the project, were developed under the intense scrutiny of Aboriginal cultural leaders and advisers. Rigorous processes of consultation were established to ensure that Aboriginal people retain complete control over their own knowledge and that sensitive information is safeguarded.

As a result, the recording, translation and community clearance of stories has taken two years and repeated visits to communities to complete.

More than a hundred people from 12 language groups and 24 communities have told their stories in their traditional languages for the Canning Stock Route Project. Most were senior people, whose breadth of knowledge and generosity has enriched the collection.

The threads of multiple stories are woven into their oral histories so that life stories merge with stories of culture, creation, law and historical recollections.

However, as old people may not always be aware of the potential for stories told using unfamiliar technology to reach very public audiences, interviews have first been translated then divided into their various story parts, so that individual consents for each narrative element and for every proposed use could be obtained by co-curators and Aboriginal translators. 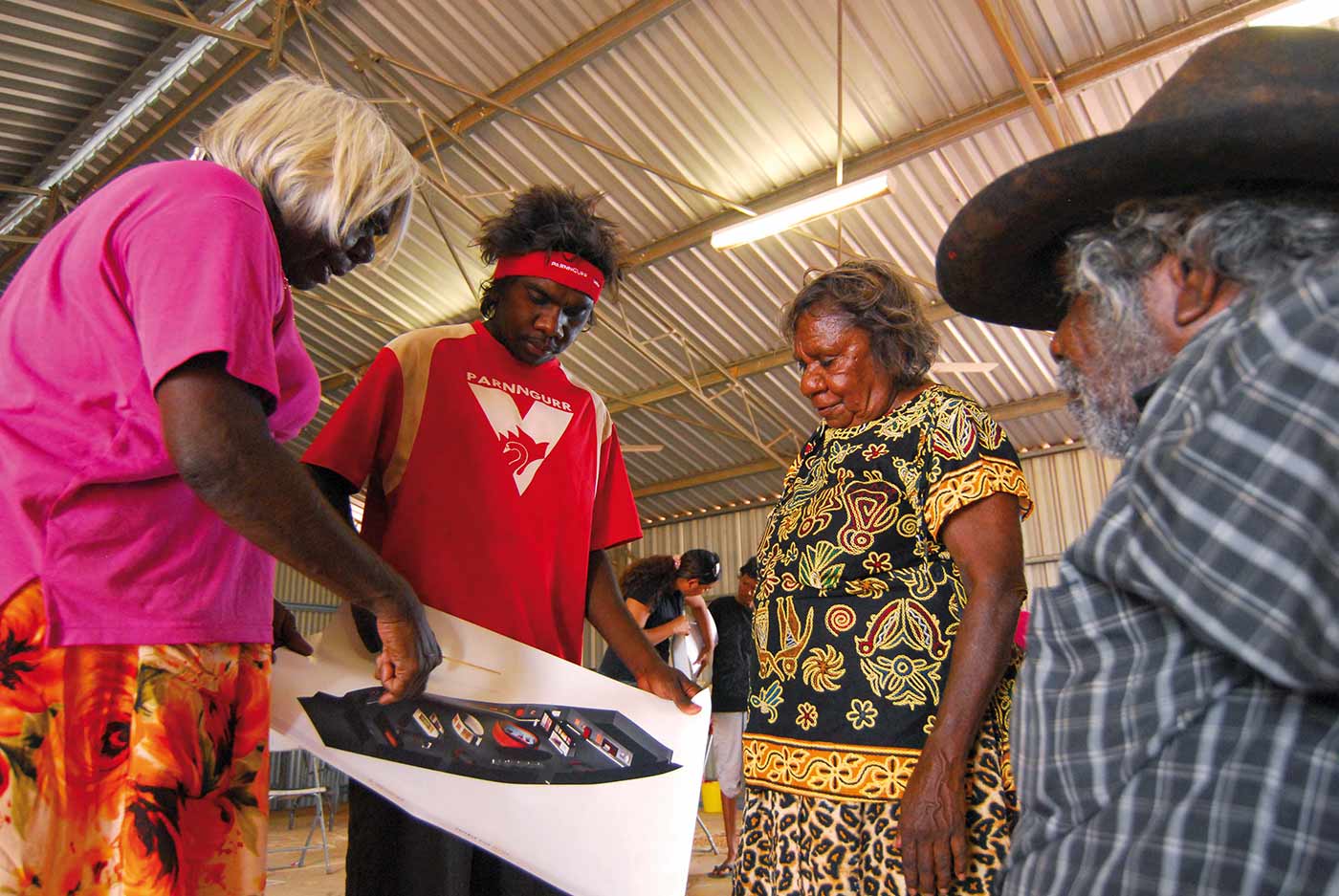 This labour-intensive and exacting approvals process has nevertheless been one of the most rewarding phases of the collection's development. The painstaking care with which their permissions have been sought has demonstrated to the artists the degree to which their words are valued.

And it has been profoundly moving to witness the pleasure which contributors have derived from the knowledge that their stories are finally being recognised within the nation's history.

Each trip we've done, each artist, each group has been just surprised on how big the project was and that their story is going to be out there ... They know it's going to happen for real now. I think when they sign off those papers, they sign off with such loving happiness in their hearts, filled with telling their stories.

Extraordinary new information was often added in these sessions, and although some stories were deemed unsuitable for public use, the vast majority were approved with a sense of pride. The impact on extended family members, who gathered around to listen to these stories, was also pronounced.