Listening to Country: The inseparable links between family and Dreaming on the ‘Canning Stock Road’ (part five)

Blackfella got to respect 'nother people ... [If they] come to that 'nother tribe making trouble, someone might be get sing ... You gotta respect elders there. Not walk in anywhere. 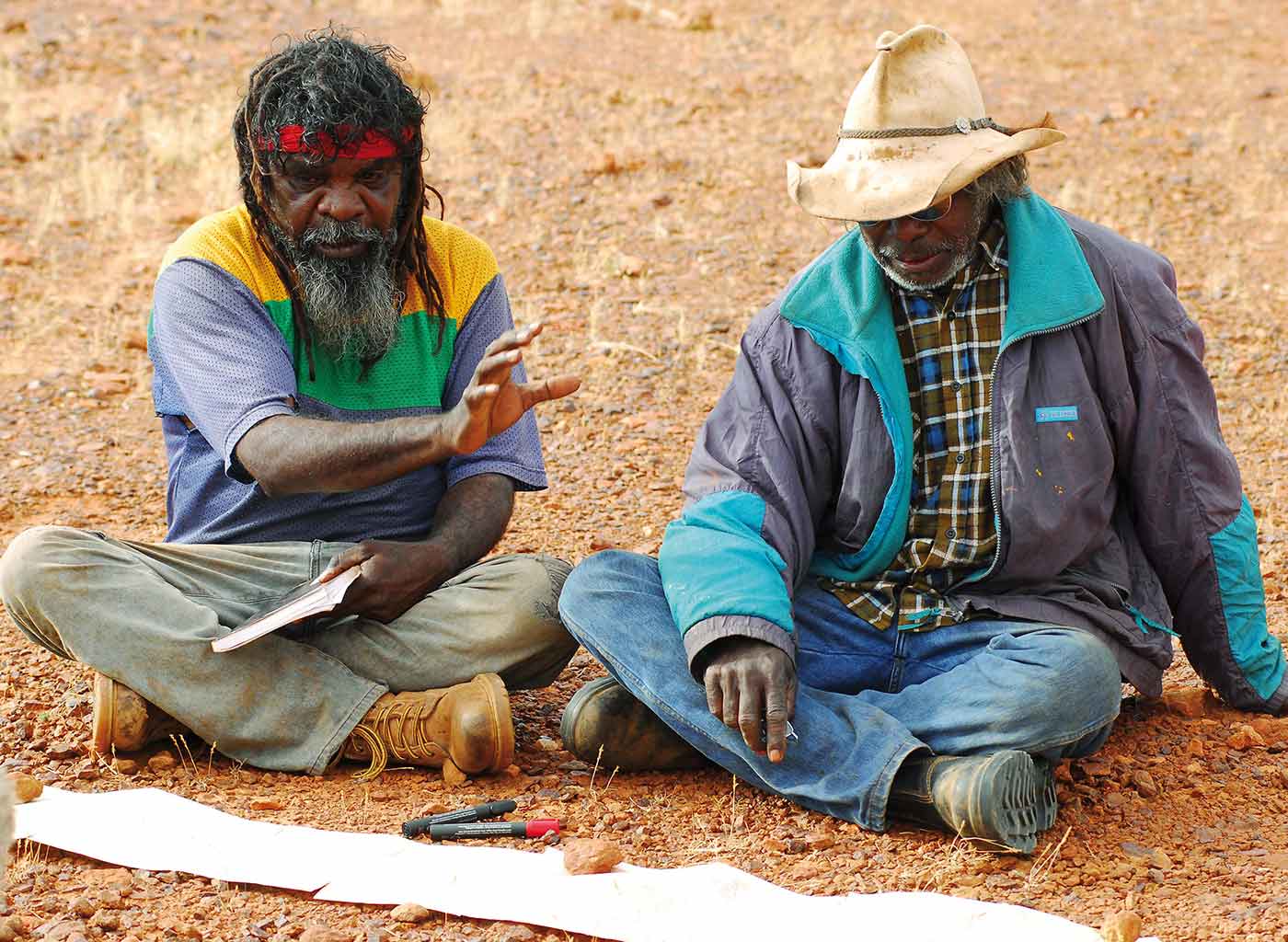 You're trespassing on other people's Country, other people's land. You know that word you say, 'trespassing'? You can't trespass on other people's property. You're breaking the law. Because we've got our own law and where the boundary ends, it's the songlines you follow. That's what the old people showed us. The old people keep it in their head. 'This songline. Ah, that's where my boundary finishes.' And that person in that group where they're having a ceremony, 'Oh, his boundary now, he can sing that area, that's his Country.'

When we go in different area people show us, 'This the main jila [spring], or even jumu [soak]'. At night, that people gotta sing that song and tell you that story, how that place been come, and then you're in the picture. Every water got a song. You gotta buy the respect of that mob, every jila. People got to tell you story to make you happy and safe. Every place got a story.

Alfred Canning was aware that Aboriginal guides perceived the act of entering another's territory as an extremely dangerous transgression, something they were very afraid of committing.

Because of this, the survey party endeavoured, theoretically, to release guides before they left the bounds of their own Country. In reality, however, they were often unaware of the location of these boundaries themselves, not to mention unwilling to lose the sources of their information.

Although guides who joined the party voluntarily were not always automatically chained, Canning became convinced that it was necessary when his most generous informant, a guide the party referred to as Tom Waldon, disappeared one night after mapping the surrounding waters in remarkable detail.

Hubert Trotman, Canning's second-in-command, who was responsible for 'handling the natives', acknowledged afterwards that they had indeed travelled beyond his Country.

For Canning, however, his escape seemed inexplicable:

As far as I could see they rather looked upon following us along and showing us water as a sort of picnic, because they hunted the whole way and I used to shoot a number of rats and they took the very keenest interest in the hunt. [But] at night time you could not rely on them. If you turned your head away they were gone ...

My opinion is that the native will come to you quite voluntarily ... You may treat him ever so well, probably he may stop with you one night and be quite contented and all of a sudden he will vanish without any rhyme or reason.

There was one case where a native played a confidence trick on us very quickly. When we were camped he went down on the ground and cleared a long space and drew a map of the whole Country round about that he knew of. I never saw a native who told us so much. He drew all the different waters and pointed out the different directions, and then he went ... and made his own breakwind, lit his own fire, and sat down as contentedly as possible ... I was sitting down practically looking straight at him. He was not three yards away and I just took a few notes and then looked up and he had gone without any reason apparently. [6]

For Aboriginal people like Mervyn Street, the complexity and danger of the situation in which the guides found themselves is easy to imagine:

Some people might have been forced to go there and when they been get to that 'nother area, might be they been get frightened two sides: from other tribe – because they been come from 'nother place – and from kartiya [whitefella] side same time. That's why kartiya might have been chain them every night time, so they can't get away.

Although Canning relied on his guides to map the surrounding waters in ground drawings that accurately represented their location, he was entirely unaware of how intricately the territories he crossed were actually articulated or by what means.

His own map of the Canning Stock Route could be seen as a symbol of colonial myopia: a ribbon of wells and native waters within a vast fabric of emptiness.

Yet invisible to Canning (and to most of us today) were the complex fields of knowledge and information, delineated within the very landscape in a detailed network of Dreaming tracks. Within this matrix of stories, songs and ceremonies, every aspect of the Country was wholly mapped.