Drawing a line in the sand

The Canning Stock Route and contemporary art (part one)

The Canning Stock Route has a long and largely invisible place in the story of Aboriginal art in the Western Desert. Over the past decades it has emerged here and there, in a painting title by Rover Thomas or a painting story by Eubena Nampitjin, but it has never been a story that has explained anything, or been explained by anyone. [1] 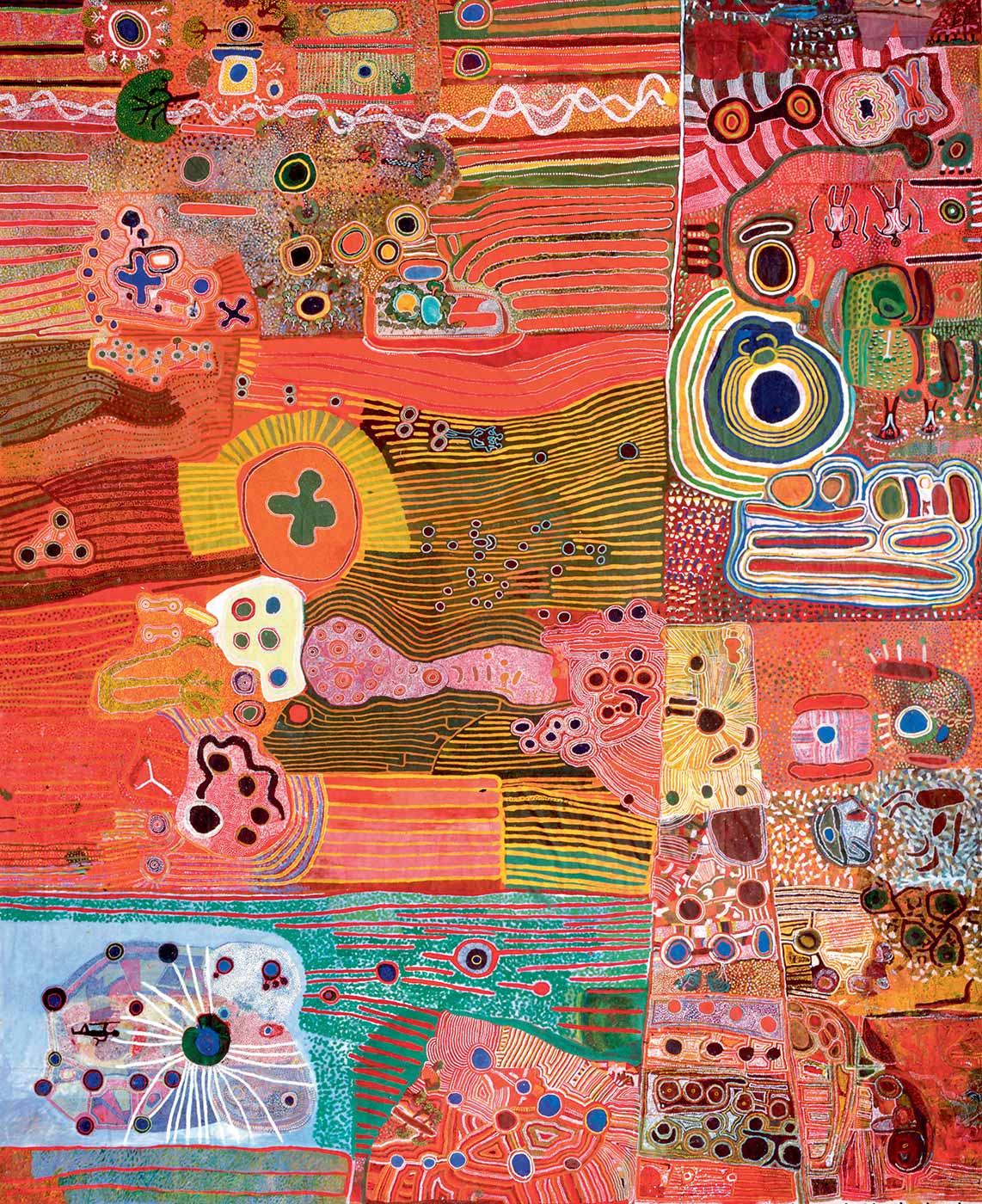 The stock route's most prominent place in contemporary Australian art is perhaps as the thin white line in the monumental Ngurrara Canvas, a colonial thread so overwhelmed by the bright abundance of Country that it effectively disappears from view.

The Museum's Canning Stock Route collection, perhaps surprisingly given its title, achieves a similar effect by using the stock route as the locus for a cross-cultural story that throws the surrounding desert world into relief.

The Canning Stock Route is many things. It is an 1850-kilometre chain of waters that operated for a few short decades as a moderately successful way to transport cattle through the desert. It is a line on a map that crosses the Countries of many desert peoples.

It is also the zone in which cross-cultural contact, conflict and ultimately cooperation (or at least, coexistence) between Aboriginal people and outsiders occurred in the 20th century. It is the road that many people followed out of their desert lives and into the fringes of something called 'Australia'.

And today the Country the stock route cut across is surrounded by the major artistic communities of the Western Desert. A hundred years after its creation, the Canning Stock Route still sits amid the great spaces between those art centres, from the Kimberley to the southern goldfields, from the west coast to the fringes of Central Australia: a story waiting to be told.

The paintings in this collection could be viewed on one level as a survey of contemporary Western Australian desert art. So why have they been brought together as part of the National Historical Collection?

In the process that road, and the history of twentieth-century Australia that it ushered into the desert, have been recast through Aboriginal eyes: re-imagined through the concepts of Ngurra (Country), walyja (family) and Jukurrpa (the Dreaming).

The road itself operated as a stock route for only a few decades, yet as the main colonial artery into the desert region it was a vector for cross-cultural encounter and remains a reference point for Aboriginal narratives in oral history and contemporary art.

The Canning Stock Route, and the collection that takes its name, acts as a narrative lens through which it is possible to trace both the human movements and the subsequent artistic movements that have defined the changing landscape of the Western Desert in the 20th century.

Although there is no category of Canning Stock Route art and no homogenous group of Canning Stock Route people, the road does provide a historical and geographical focus otherwise lacking in our understanding of an important group of Western Desert artists. The stock route story is therefore one that connects the people and the art of the region.

1. I would like to thank Howard Morphy for encouraging my research on this project, despite the delays this has caused in the work I should have been doing, my long-suffering PhD thesis. These past three years of research around the Canning Stock Route would not have been possible without Howard, his patience, and the support of the Research School of Humanities (Australian National University) more broadly

'Drawing a line in the sand: The Canning Stock Route and contemporary art' by John Carty includes: