The Australian component of the Water exhibition, 'Australia's water story', was added by the National Museum of Australia.

It included objects from the Museum's National Historical Collection which helped examine the use of water over time and the challenges of variable supply and demand. Australia is the driest inhabited continent, with the most variable rainfall.

Water in a dry land

Looking at water in nature, there are animals, birds and plants that reflect remarkable adaptation to a dry continent.

Small mammals such as the fat-tailed dunnart and kowari obtain all their water from their food. They don't need to drink, which is just as well as they inhabit some of the most arid parts of Australia.

Floods boost food sources and breeding opportunities for birds. How they find the water is still a mystery.

Plants have adapted with root systems, leaf forms and hard seed cases which combine to give advantages in a dry environment.

Water and the first Australians

Indigenous people have been in Australia for at least 60,000 years, learning how to live in a continent where the fundamental fluid of life can so often be in short supply. From coolamons and canoes to fishtraps, Aboriginal material culture illustrates the triumph of one of the world's oldest civilisations.

The exhibition included a bark canoe and a wooden container used for carrying water, both from the Museum's National Historical Collection.

Significantly, water isn't just a resource. It is part of culture too. One of the most pervasive figures in Indigenous spiritual life is the Rainbow Serpent, strongly associated with rain and a giver of life.

Paintings from the Museum's collection showing the Rainbow Serpent and traditional waterholes went on show alongside a painted boomerang and a pubic cover made from pearl shell. These examples of Indigenous cultural interpretations of water helped to demonstrate its significance as more than a physical resource. 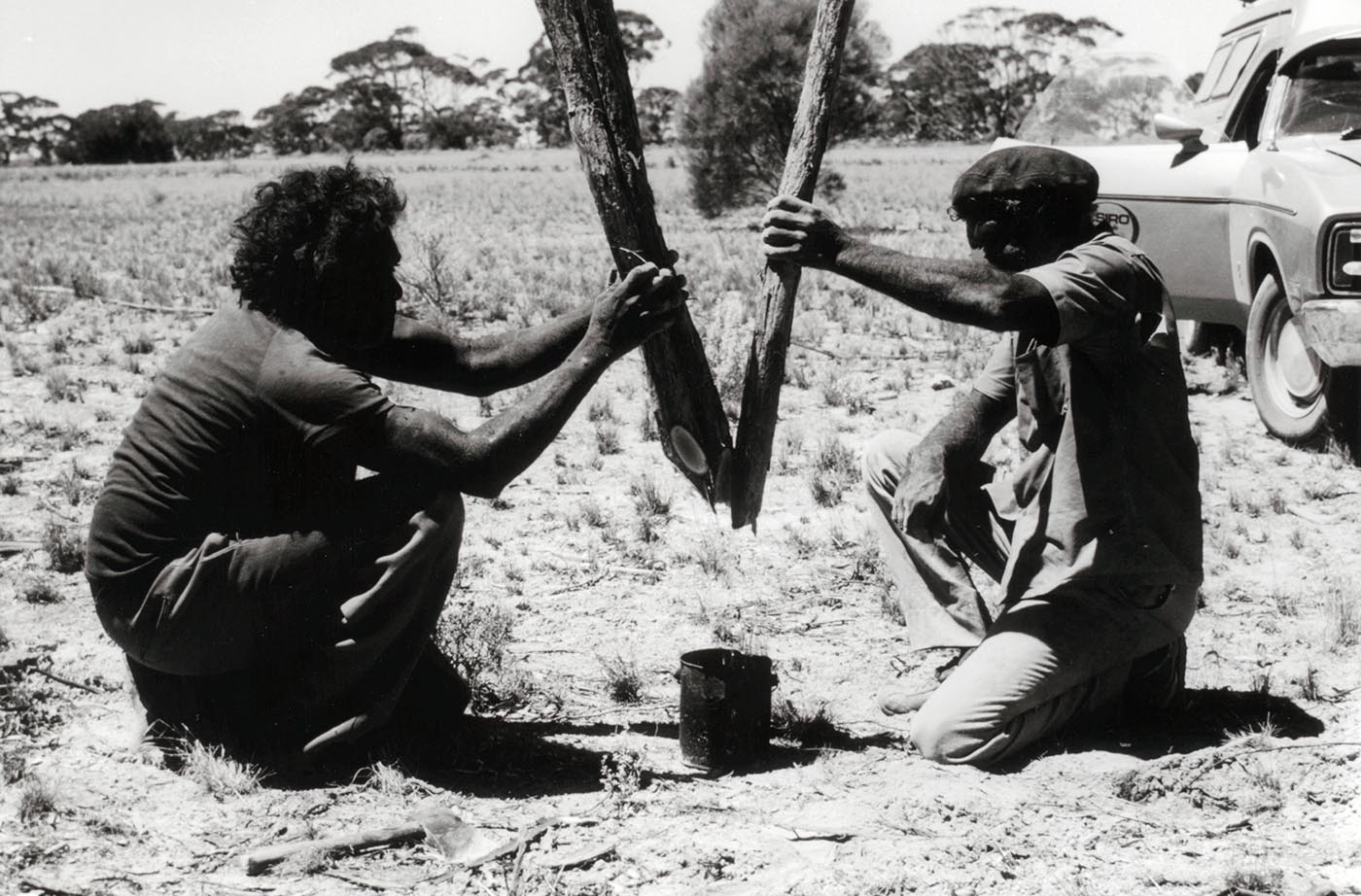 European settlers soon discovered that Australia’s rainclouds were capricious. So they started developing water resources to overcome drought. Irrigation schemes began in the late 1800s. Food production and standards of living were boosted.

One of the most iconic features of Australia’s irrigation areas, a water-metering Dethridge wheel, produced in their tens of thousands but now becoming obsolete, was on show in the exhibition 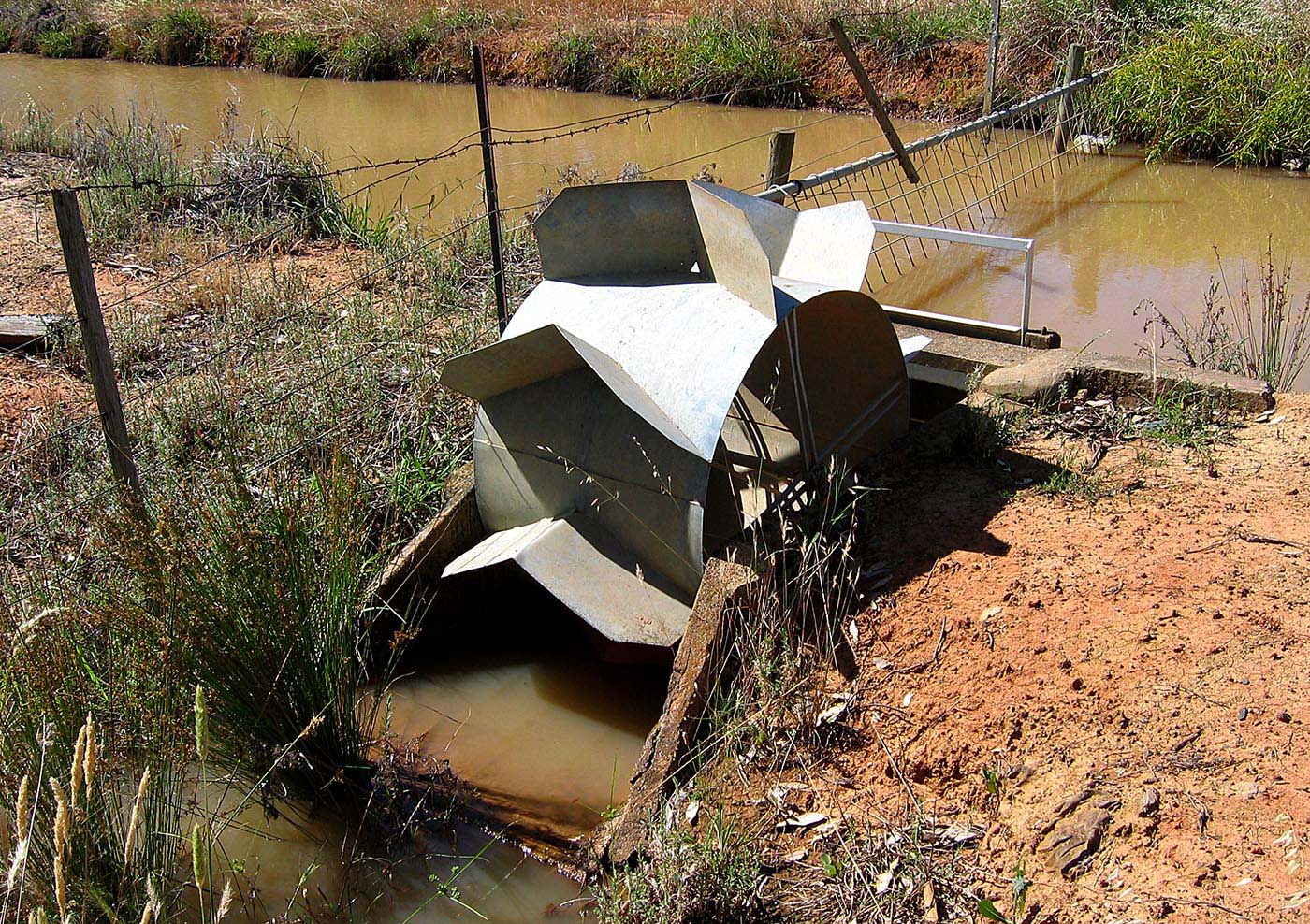 The Dethridge water meter is a symbol of Australian irrigation

Among the array of objects from the Museum's National Historial Collection, visitors could see the scheme model presented to Prime Minister Ben Chifley when the Snowy was inaugurated near Adaminaby in October 1949. There was also a hard hat and gelignite box used during the construction, and a tunnelling world-record medal.

Following all those water wonders, Australians now experience water woes. Under the influence of climate change, one of the worst droughts in recorded history prevails. Simultaneously, agricultural use of water is scrutinised like never before. Regulation of rivers through dams, and extractions for irrigation, have had profound impacts.

Changed flow patterns have contributed to declines in native fish and waterbird populations. Wetlands have shrunk and salinity has worsened. The biggest blue-green algae outbreak seen anywhere on earth occurred on the Darling River in 1991, and another one bloomed in 2009, covering hundreds of kilometres of the Murray River.

Hope for the future

Despite the gloom, there are positives, and hope for a healthy water future was a theme of the exhibition.

An instrument used near Wagga Wagga to research salinity was displayed, underlining work to combat rising groundwater levels and salt.

A live Murray cod served to remind visitors what is at stake in our rivers and was accompanied by images of newly constructed fish ladders on dams, and fisheries research initiatives.

Senator Bob Brown's life jacket, worn during his involvement in the Franklin Dam campaign in Tasmania in the 1970s, underlined popular protest against over-development of water resources.

A short film, River Spirit, made by National Museum senior curator Matthew Higgins, encouraged visitors to enjoy the beauty of our rivers.

Episode one of the TV series Two Men in a Tinnie summed up some of the key issues in the Murray-Darling Basin. Drawings and writings by children from Basin schools provided an insight into their environment.

Exhibition visitors were also challenged to ponder a range of water issues at the personal level, from the use of dual flush toilets to water as a vote-swinger at elections.

Above all, the exhibition aimed to show people that Australia's water future is not simply something imposed on them, but is created by people and the decisions they make now.

Bob Brown's life jacket, 1976-1981An orange fabric life jacket, padded with plastic air filled pillows. The jacket has a white zip at the front, with two black plastic belts around the chest and waist and a drawstring around the bottom edge to hold it on firmly. A label sewn into the jacket gives a warning and instructions. The manufacturer's label on the front ...

About the exhibition
Global perspective
Behind the scenes
Did you know?