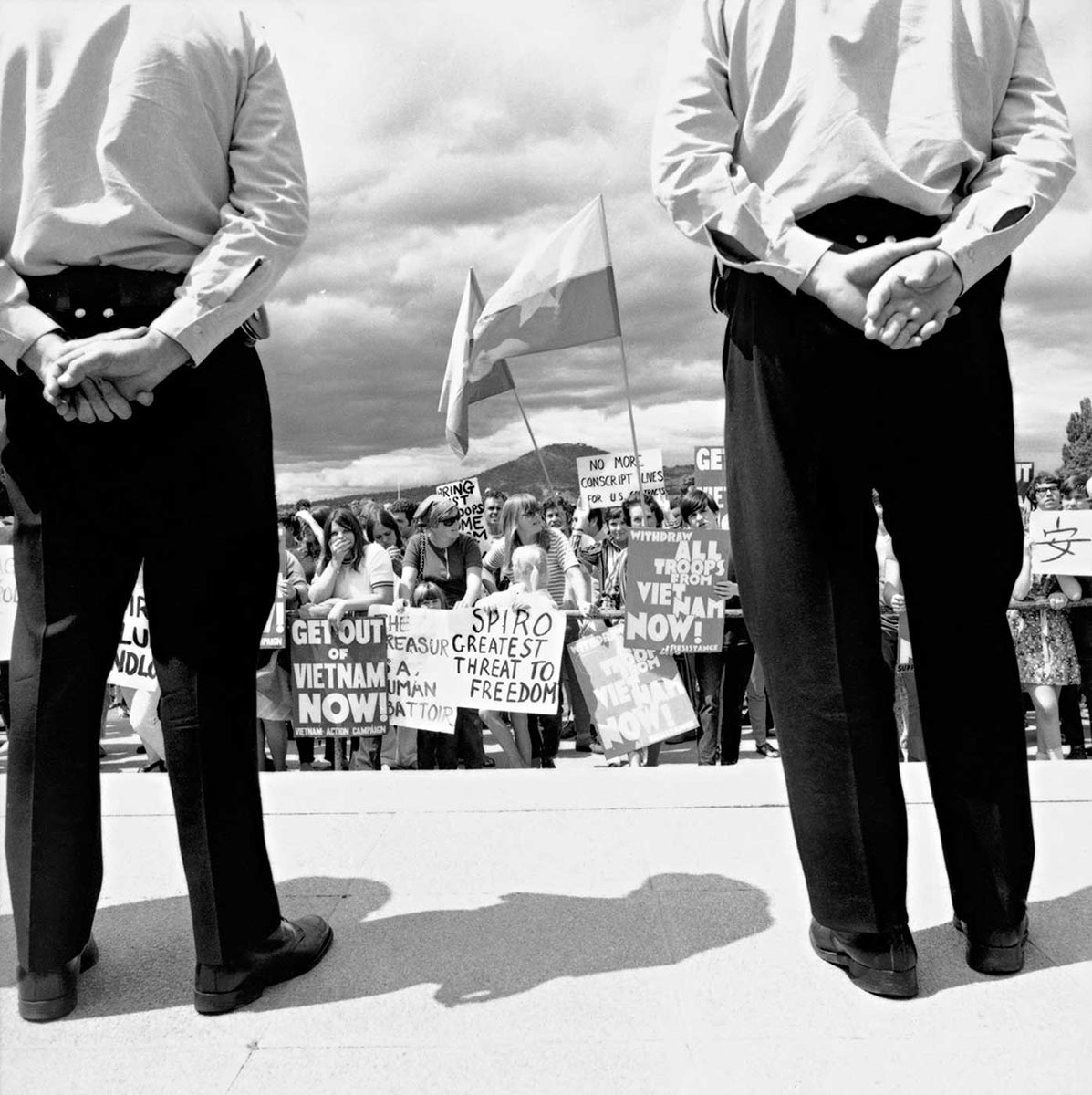 The Vietnam moratorium protests, the first of which took place on 8 May 1970, were the largest public demonstrations in Australia’s history at the time.

They represented growing discontent within a portion of the Australian population to the government’s commitment to the Vietnam War in general and conscription in particular.

The protests took place during a period of great social change in Australia, when people from a range of backgrounds were prepared to defy authority.

The government’s rationale was to stop the spread of communism and strengthen the country’s ties with our most important strategic ally, the United States.

Prime Minister Robert Menzies loathed communism and believed China, and any countries that came under its control, posed a threat to Australia.

When France was forced out of Vietnam in 1954, the country was divided between the communist north and a quasi-democratic (though corrupt and dictatorial) south. It soon became clear that North Vietnam intended to seize control of the south.

From the late 1950s America committed troops to help South Vietnam, rapidly escalating its deployments under the Kennedy and Johnson administrations. The Australian Government’s decisions to send a team of military advisers in 1962, and then ground forces in 1965 were motivated by strategic and economic interests.

The US, Australia and New Zealand had signed the ANZUS treaty in 1951 and it was hoped that by showing a commitment to the American plan in Vietnam, Australia would secure more comprehensive protection against communism, as well as an improved trade relationship.

Initially, the decision had broad support from the public and media. However, it was opposed by Labor, the more militant unions and a small faction of anti-war groups.

The National Service Act 1964, passed on 24 November, required 20-year-old males, if selected, to serve in the Army for a period of 24 months of continuous service (reduced to 18 months in 1971), followed by three years in the Reserve.

The Defence Act was amended in May 1965 to provide that conscripts could serve overseas. Over 63,000 men were conscripted and over 19,000 served in Vietnam.

For much of the war, opinion polls showed that most Australians were against conscripts serving in Vietnam even though they broadly supported the war itself.

As the war progressed Australians were less convinced by the original rationale that China and communism posed a direct threat. Opposition to the war also grew as national servicemen were killed and wounded in the course of their service.

Public support for the war remained strong when Prime Minister Harold Holt visited Washington on 29 June 1966 and told President Lyndon B Johnson that Australia was ‘all the way with LBJ’.

When Johnson visited Australia later that year, huge crowds turned out to greet him. But there were signs of unrest. A few militants threw paint and rotten eggs at the President’s limousine and there were death threats although only a few small public protests.

The groundswell of support for the anti-war movement came from baby-boomers – the 40 per cent of the population under the age of 20. Most university students strongly opposed the war, especially the growing number of militant leftists.

Vietnam was seen as the most damaging policy of a firmly entrenched, conservative government whose decisive electoral victory led to perceptions of arrogance. As the war continued, with no end in sight, a wider range of people began to object to the war on moral grounds. As the author Paul Ham says:

Bit by bit, like a great ship turning at sea, Australia’s support for the war gradually shifted direction. Like hundreds of little tugboats, the political misjudgements, draft resisters, death notices and protesters nudged Australian and American minds on a new bearing.

The Vietnam conflict was known as the ‘television war’ because so much of it was televised.

The public was routinely exposed to horrific scenes that vividly conveyed the scale and degree of suffering in Vietnam. Public disquiet in Australia and America was exacerbated by the My Lai massacre.

In March 1968 a company of US troops under the command of Lt William Calley murdered 347 civilians in the South Vietnamese hamlet of My Lai.

That such atrocities took place further undermined the basis of the war, which had been to protect South Vietnam and halt the spread of communism. In addition, the Australian public began to think that if American soldiers were doing this sort of thing then possibly their Australian comrades were doing the same.

By January 1970, the US was showing signs of withdrawing from Vietnam, as was Australia. But no exit date had been stated, and Australia’s position was clearly dependent on what the US was going to do.

At a national meeting in Melbourne in early 1970, anti-war groups from across Australia agreed to hold a moratorium. The word ‘moratorium’, in this sense, meant a halt to business as usual.

The moratorium took its cue from the US moratorium in October 1969, in which more than 500,000 Americans protested in 1,200 cities and towns.

It was seen by those taking part as a non-violent protest and proved to be the largest and most sustained in Australia’s history. The two objectives were to withdraw Australian troops from Vietnam and to end conscription.

It came soon after the 1969 Coalition election victory, which meant for many people there would be little shift in government policy on Vietnam for at least three years.

The most visible leader of the moratorium movement was Shadow Minister for Trade and Industry Dr Jim Cairns, whose charisma and intellect galvanised thousands of anti-war activists. Above all he recognised how important it was that the marches, which advocated peace, be peaceful themselves.

The moratorium movement drew in a disparate range of groups opposed to the war – clergy, teachers, academics, unions, politicians and school students. Donations poured in. While university students had led the anti-war movement up to this point, the moratorium involved thousands of everyday, middle-class Australians.

Not all Australians supported it; because of the unprecedented size and intensity of the protest many found it threatening. Conservatives were strongly opposed, among them Billy Snedden, Minister for Labour and National Service, who described it as ‘political bikies who pack-rape democracy’.

A total of 200,000 people took part in the first moratorium. The largest event was in Melbourne where 70,000 marched peacefully down Bourke Street, led by Cairns. The police were restrained and the crowds watching them cheered. Similar events took place in Sydney, Brisbane, Adelaide, Perth, Hobart and dozens of rural towns.

The second and third moratoriums took place on 18 September 1970 and 30 June 1971 respectively. These events were dominated more by left-wing extremists, and fewer people attended. The second moratorium turned violent. In Melbourne police baton-charged protesters and in Sydney 173 people were arrested.

My Lai had the effect of shifting the focus of many anti-war protesters away from the government and onto soldiers. Whereas the veterans of the world wars were welcomed home as heroes, both regular soldiers and national servicemen were occasionally accosted, spat at and insulted by protesters.

Even many branches of the Returned Servicemen’s League (though not all) refused to accept them as members. This had a severe psychological impact on veterans, many of whom were already traumatised by their experiences in Vietnam.

Vietnam moratoriums as a Defining Moment

It is unlikely that the moratoriums directly affected the government’s decision to withdraw troops from Vietnam, which Prime Minister John Gorton (who succeeded Holt in 1969) had already started to do and Gough Whitlam promptly completed when he swept to power in 1972. The stronger influence on Gorton was US policy.

However, it probably affected the government’s policy on conscription in that soon after the first moratorium, Cabinet took measures to reduce the number of draft-resisters who went to jail.

The moratoriums were an indication of a broad collapse in public support for the war. They were both revealed and fostered a new sense of unity among those opposed to Vietnam and conscription.

The Australian population was younger, better educated and more affluent than ever before, and it was emerging, along with the rest of the developed world, from the turbulent 1960s, which had put an end to automatic deference to authority.

The moratoriums also helped launch women’s liberation. Women were heavily involved in all three moratoriums. The women involved had discovered that the male leadership of the moratoriums was at least as sexist as their opponents.

Their response to this influenced their subsequent protest activities during the 1970s, among the results of which was the 1972 decision by the Conciliation and Arbitration Commission to grant equal pay to women.

Vietnam Moratorium Withdrawal All Troops NowBlack, red and white badge with "VIETNAM MORATORIUM / WITHDRAW ALL TROOPS NOW" around the rim.

Prime Ministers of Australia
The Home Front: Australia during the First World War
Google Arts and Culture
Our collection
Listen Audio on demand

Michael Caulfield, The Vietnam Years – From the Jungle to the Australian Suburbs, Hachette, Sydney, 2007.