John Howard waited a long time to become Prime Minister. By the time he won the job, he had been in parliament for 22 years.

After 11 years in office, Howard became the second Prime Minister to lose his seat in the House of Representatives while still serving as Prime Minister.

John Winston Howard was born in Earlwood in Sydney on 26 July 1939. He grew up in this south-western industrial suburb, attending the local government primary school and later Canterbury Boys’ High School.

His father, a garage proprietor, influenced his emerging political and economic views, impressing on him the importance of small business as an employment provider.

After studying law at the University of Sydney, Howard graduated in 1961, and then practised as a solicitor for the next 12 years. A committed Liberal Party member, he was soon deeply involved in its organisation. He joined the party’s New South Wales State Executive in 1963, and served as State Vice-President of the party from 1972 to 1974.

In 1971 Howard married Janette Parker, and they had a daughter and two sons.

John Howard entered the House of Representatives as Liberal member for the suburban Sydney seat of Bennelong at the general elections on 18 May 1974.

Howard first became a minister following the election of the coalition government of Malcolm Fraser in December 1975, taking on the business and consumer affairs portfolio, which he held until 1977.

From May to December 1977 he served as Minister Assisting the Prime Minister and from July, as Minister for Special Trade Negotiations. In November that year, a month before the next federal elections, he was appointed Treasurer.

He held the position for more than five years, until the Fraser government lost office with the election of the Labor government led by Bob Hawke on 5 March 1983.

During the following 13 years of Labor government, Howard occupied a series of key positions in the shadow ministry. He was Shadow Treasurer and Deputy Liberal Party Leader (1983–1985) before replacing Andrew Peacock as Leader of the Opposition on 5 September 1985.

The change in leadership, and the continuing Howard–Peacock rivalry, signified the new ascendancy of supporters of a ‘dry’ or ‘economic rationalist’ philosophy within the Liberals over those favouring a ‘wet’ ideology more oriented towards social justice and ‘small-l’ liberal concerns.

Howard led the Liberal–Country Party coalition to a narrow loss at the next federal election in July 1987. The coalition’s prospects of an electoral victory over Labor had been severely damaged by the failed attempt of Queensland National Party Premier, Johannes Bjelke-Petersen, to enter federal parliament and seek the prime ministership.

Howard retained leadership of the opposition for nearly two more years, but the Howard–Peacock rivalry smouldered. It erupted again in May 1989, when Peacock secured sufficient votes to regain the Liberal leadership from Howard in May 1989.

Following the resignation of Alexander Downer as Opposition Leader in January 1995, and with the Liberal party in disarray, Howard secured the position of leader for the second time.

With little more than a year before the next federal elections were due, Howard set about vigorously attacking the Labor government led by Paul Keating, mainly on its record of economic management.

Under his revitalised leadership, the Opposition coalition began campaigning on the promise of drastically reducing the Commonwealth’s increasingly heavy debt burden. 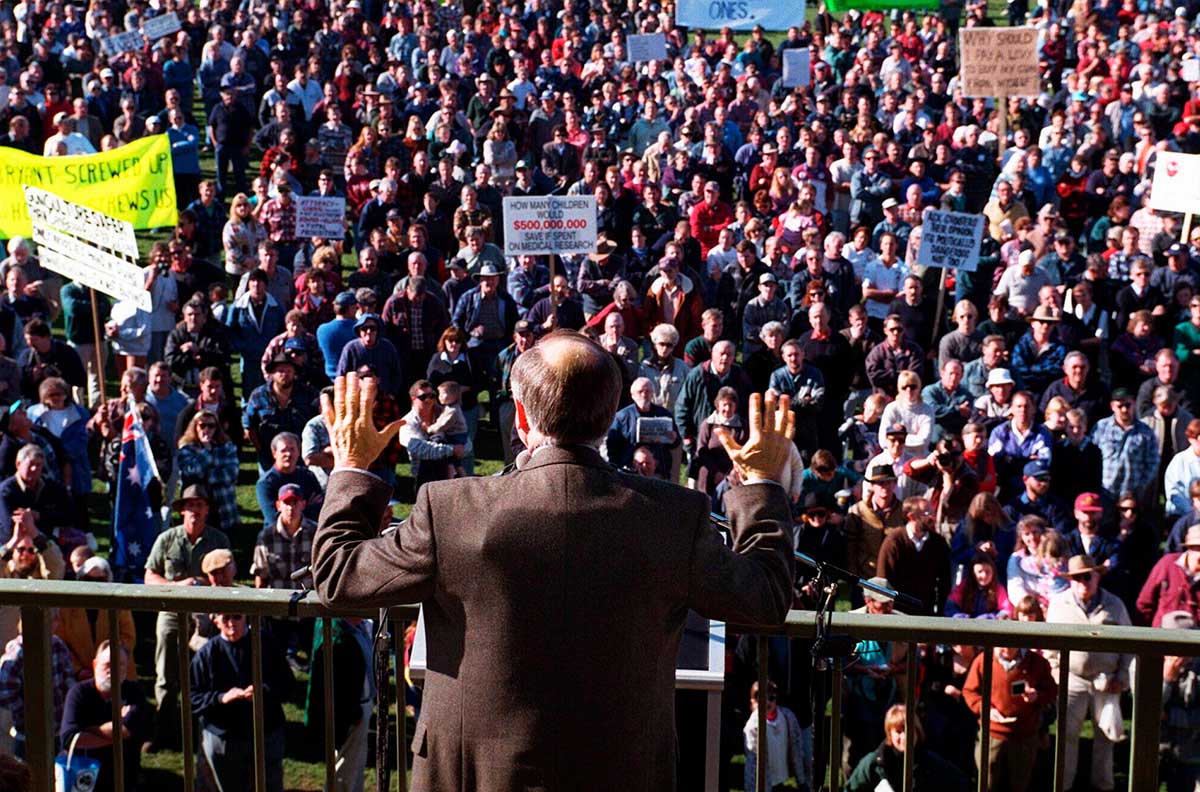 At the federal election on 2 March 1996 the Liberal–National Party coalition under Howard was swept into power with an enormous majority in the House of Representatives.

Soon after, and claiming the government had been left with a ‘black hole’ of debt by Labor, he promised to reduce government expenditure by $8 billion over the next three years. This pledge was to continue guiding his government’s economic policies.

Only three weeks after Howard took office, a gunman murdered 35 people at Port Arthur, Tasmania. This prompted a controversial government decision to limit individuals’ rights to gun ownership and to buy back guns from existing owners. Howard’s federal government, however, secured the cooperation of the state and territory governments to pass uniform gun control legislation.

During his time as Prime Minister, Howard won the general elections on 3 October 1998, 10 November 2001 and 9 November 2004. After the 2004 election, the government parties gained a majority in the Senate for the first time since 1981.

During his time as Prime Minister, Howard implemented many government policies including: 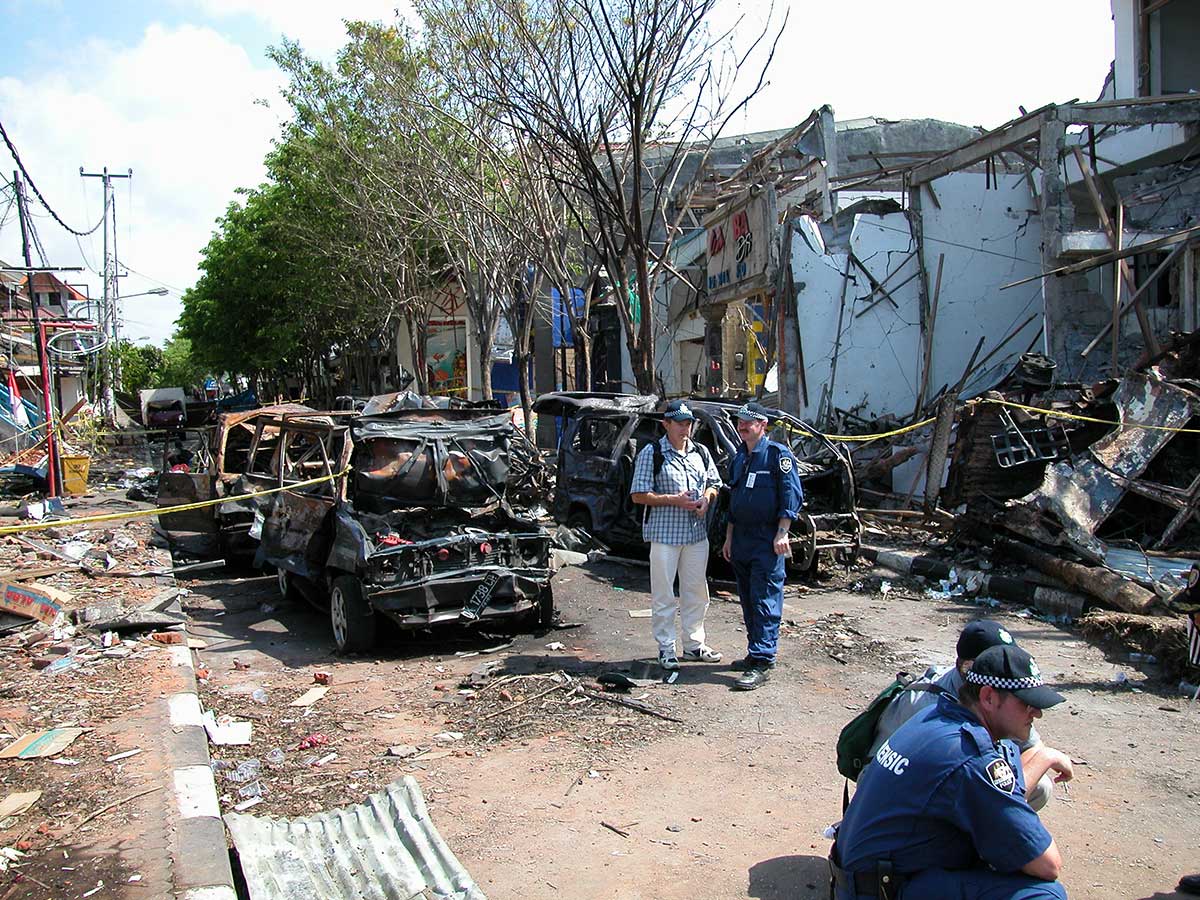 At the general election on 24 November 2007, Howard’s Liberal-National coalition was defeated by the Labor Party led by Kevin Rudd. Howard was the second-longest-serving Prime Minister after Robert Menzies, and became only the second Prime Minister to lose his own seat.

In conversation with the Hon John Howard

Date recorded: 7 March 2018. A reflection on the history of liberalism in Australia, from prime minister Alfred Deakin to prime minister John Howard, and a discussion on Defining Moments in Australian history.
Open player in a new tab
Presenters: Tom Frame, John Howard and Mathew Trinca
Tags:
00:00 / 61:20

Small fibreglass caricature statuette of John HowardA small figurative statuette characterizing John Howard. Made from fibreglass that has been moulded then painted. He has glasses, is wearing a suit and has very textured skin.