Deakin was a founding father of Federation, along with Edmund Barton.

Deakin was a lawyer who had another string to his bow – journalism. He wrote anonymous newspaper articles about federal politics for many years – even while prime minister.

Alfred Deakin: The Man behind the Mask 15:55

Historian David Headon on the life of Alfred Deakin.

Alfred Deakin was born on 3 August in 1856, in Collingwood (now part of Fitzroy), Victoria. He was the second of two children of William Deakin and Sarah Bill, who emigrated from England to Adelaide in 1849.

William first worked as a clerk, before moving to Melbourne in 1851 during the Victorian gold rush. After prospecting for a time, William opened a coach and carting business with Sarah’s brother, then worked as an accountant and manager of coach firms, including Cobb & Co.

Alfred was educated at the Melbourne Church of England Grammar School and studied law at the University of Melbourne. He graduated in 1877 and was admitted as a barrister in 1878.

Deakin found little work and became a journalist with The Age newspaper. Throughout his later career in federal parliament he wrote regularly (and anonymously) for the London newspaper, Morning Post, commenting on Australian politics.

Deakin married Patti Browne in 1882. They had three children.

Deakin was elected to the seat of West Bourke in the Victorian Legislative Assembly in February 1879. He resigned his seat soon after he delivered his maiden speech, following a press allegation that eligible voters had been excluded from voting.

Deakin unsuccessfully contested West Bourke at the subsequent by-election, but won it again in July 1880. He held the seat until 1889, when he won Essendon, which he held until resigning in 1900 to enter federal politics.

He held three portfolios while a member of Victorian parliament – Solicitor-General and Minister for Public Works from 1883 to 1886, and Chief Secretary from 1886 to 1890.

Deakin attended the colonial conference in London in 1877 with the Victorian delegation, and impressed the United Kingdom statesmen with his comments on difficulties faced by self-governing colonies in dealing with the Imperial government.

He attended the first Federal Convention in Sydney on March 1891 as a delegate for Victoria and was a member of the constitution committee. When the draft Constitution Bill lapsed, Deakin refused further ministerial positions. 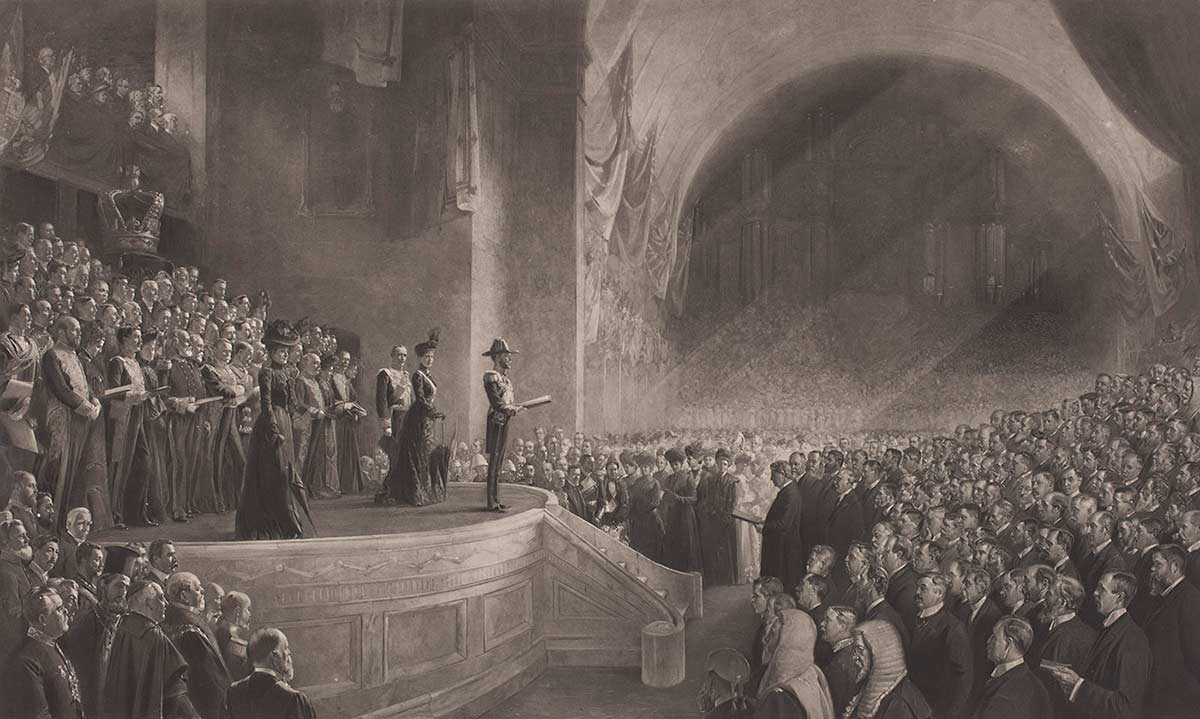 Opening of the First Parliament of the Commonwealth of Australia by HRH The Duke of Cornwall and York (Later HM King George V), May 9, 1901 by Tom Roberts

Deakin and the Federation campaign

Deakin attended the second Federal Convention in March 1897 as the third-placed popularly elected delegate for Victoria. He participated actively in convention debates but performed his main role beyond the conference hall, talking round anti-federationist delegates to appreciate the need for federal government.

The compelling pro-federation speeches Deakin made around Victoria in 1897 and 1898 did much to turn public opinion in favour of federation. On 3–4 June 1898 a referendum was held to approve the draft constitution. The constitution was accepted by the required majority in South Australia, Tasmania and Victoria, but not New South Wales.

Deakin emerged as Edmund Barton’s principal fellow advocate of federation in 1899, during the campaign for a referendum on the Constitution Bill, which had been amended to try to gain New South Wales’ support for federation.

The second federation referendum was held in New South Wales, Queensland, South Australia, Tasmania and Victoria from April to September 1899. Voters in each colony approved the amended Constitution Bill by the required majority.

Deakin joined Barton’s delegation of six Australian politicians who went to London early in 1900 to negotiate amendments to the Constitution Bill with the UK Government. Deakin and Barton, by now close friends, performed outstandingly in a series of conferences with Secretary for Colonies Joseph Chamberlain.

From May to June 1900 the Commonwealth Constitution Bill passed through UK parliament, and was granted Royal Assent by Queen Victoria on 9 July 1900.

A brief history of Australia’s journey to Federation, in live-sketch animation, as told by historian David Hunt

Barton, the first Australian Prime Minister, chose Deakin as a member of his first ministry, assigning him the Attorney-General’s portfolio. Deakin retained this position throughout Barton’s time in office.

As Attorney-General, Deakin was responsible for formulating legislation which guided the federal government up until the First World War.

The federal government developed policy and legislation on matters including financial relations between Commonwealth and states, the Immigration Restriction Act (1901) which became the basis of the White Australia policy, establishment of an Australian navy, and founding of the High Court of Australia.

Deakin took over as prime minister, leading a Protectionist government, on 24 September 1903 when Barton quit politics to become a judge of the newly instituted High Court.

Deakin retained government at the second general election on 16 December 1903 but had to rely on Labor support. He held power for another four months, until 27 April 1904, when his government was defeated in parliament over a Labor amendment to the Conciliation and Arbitration Bill.

Deakin resigned the prime ministership, which then went to Labor leader Chris Watson.

Deakin’s second Protectionist government fell on 13 November 1908 when Deakin resigned because he was not prepared to accept Labor’s ‘preference for unionists’ amendment.

After losing office to Andrew Fisher’s Labor Party, Deakin arranged a merger of his followers in May 1909 (some were still known as Protectionists, while others were calling themselves Deakinites) with his former political foes, the Free Traders (now led by Joseph Cook, who had succeeded George Reid as leader of the group in November 1908). The new grouping was known as the Fusion.

On 2 June 1909 the Fusion defeated Fisher’s Labor government in parliament. Deakin was commissioned to form his third government, and Cook became his deputy. Deakin’s Fusion government was defeated at the general election on 13 April 1910.

Deakin’s total time in office amounted to four years and 10 months, the longest time served by any of the six prime ministers to 1915. Despite relatively short and discontinuous periods in office, his governments were responsible for much policy and legislation giving shape to the Commonwealth during its first decade.

Some achievements during Deakin’s periods as prime minister were:

Deakin’s government was defeated at the fourth federal general election on 13 April 1910, which gave the Labor Party a clear majority – the first time that any group or party had gained an absolute majority in Federal Parliament. Andrew Fisher took office as Prime Minister (for the second time) on 29 April 1910.

In opposition again, Deakin began unifying the main elements among anti-Labor groups into a more formal arrangement than the Fusion. The result was the formation of the Liberal Party and the emergence of the two-party system during the period 1910–12.

Deakin himself belonged to a Victorian body called the Commonwealth Liberal Party, formed April–May 1909. Other non-Labor parliamentarians used other names, including Protectionist and Free Trader, to describe their affiliations.

In ill health, Deakin resigned as Opposition Leader on 20 January 1913. He retired from politics when the fourth parliament expired on May 1913.

Deakin’s ill health continued and he died from a stroke in South Yarra, Victoria, on 7 October 1919. He was buried in St Kilda Cemetery after a state funeral.

No legislation was passed by Deakin’s first government. Legislation introduced into parliament and passed during his second term included the:

Important amendments were also made to the Customs Tariff Act, Immigration Restriction Act and the Judiciary Act. Legislation passed by his third parliament included the:

The Ten Best Citizens of Victoria - Hon. Alfred Deakin'THE TEN BEST CITIZENS OF VICTORIA' series was published by Robert Jolley with artwork by A R Burnet. They were as result of a competition held by 'The Herald' newspaper and published around 1906.