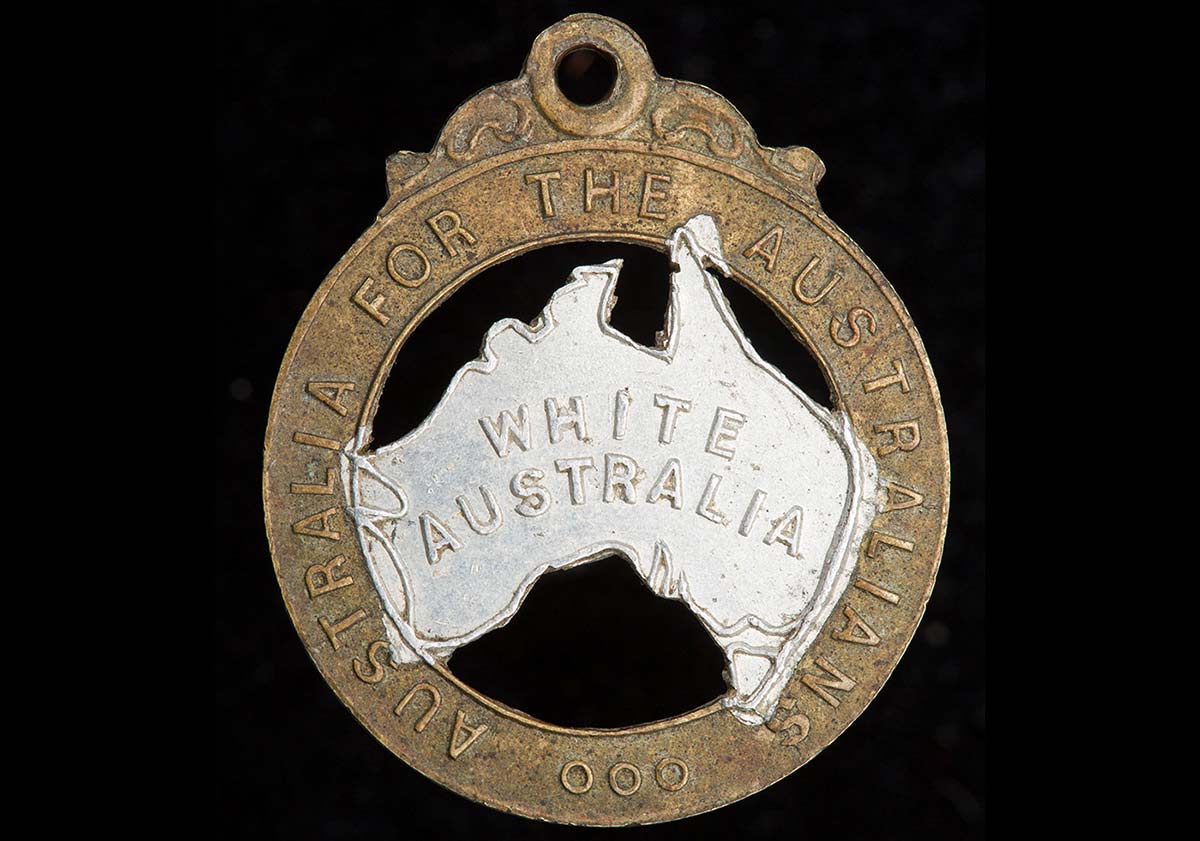 On 23 December 1901 the Immigration Restriction Act came into law. It had been among the first pieces of legislation introduced to the newly formed federal parliament.

The legislation was specifically designed to limit non-British migration to Australia. It represented the formal establishment of the White Australia policy.

That end, put in plain and unequivocal terms … means the prohibition of all alien coloured immigration, and more, it means at the earliest time, by reasonable and just means, the deportation or reduction of the number of aliens now in our midst. The two things go hand in hand, and are the necessary complement of a single policy – the policy of securing a ‘white Australia’. 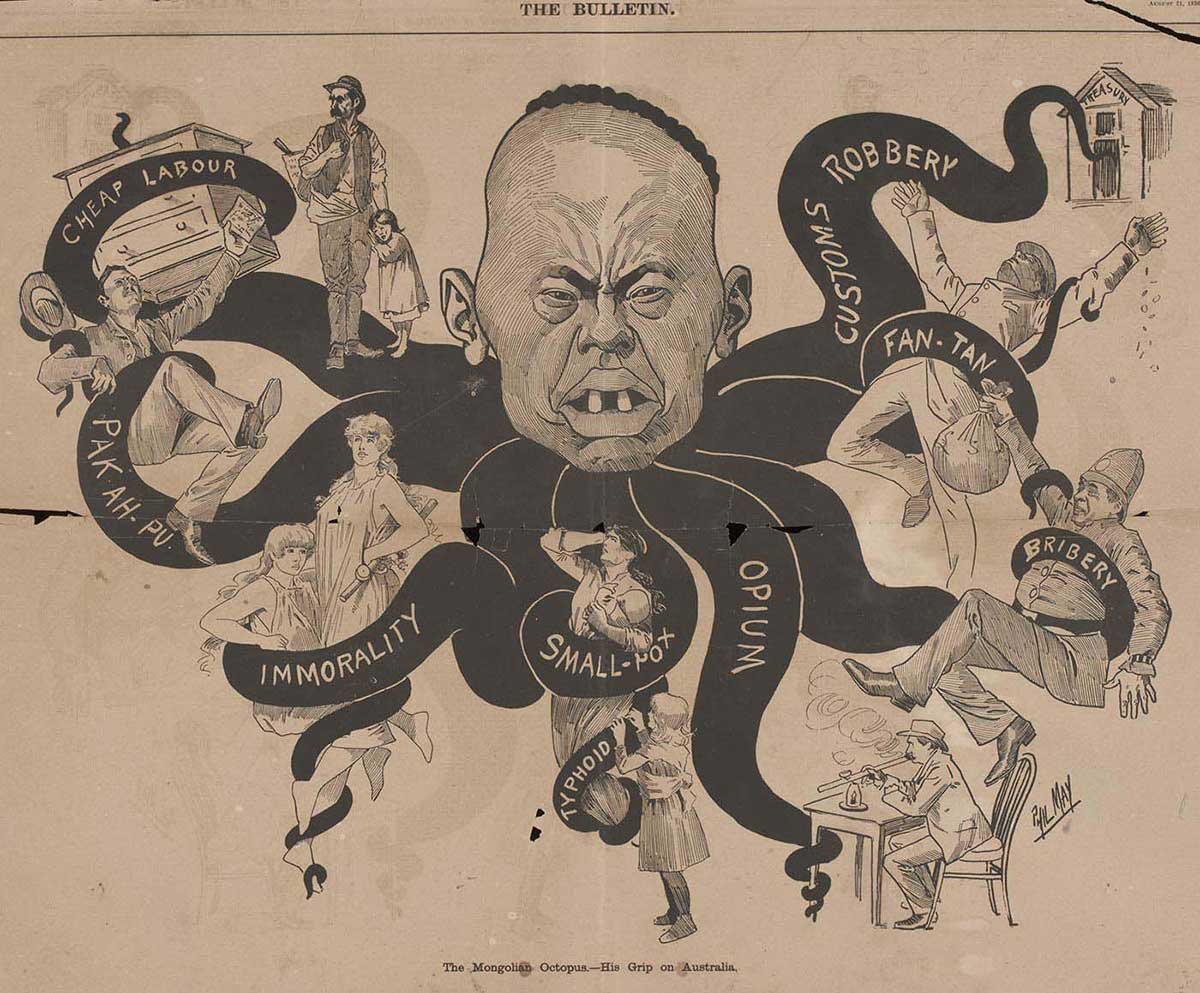 Why a 'white Australia'?

In the 1800s the majority of the white population of the Australian colonies shared attitudes towards people of different races that by today’s standards were openly racist.

Criticisms of non-white groups were based on the idea that they were less advanced than white people in all ways, especially morally and intellectually.

In Australia, this idea focused particularly on people of Asian descent but applied to all non-whites, including Indigenous Australians, who were considered a ‘dying race’.

Ironically, Australia saw itself as a utopia and a working man’s paradise, a forward-thinking country that promoted equal rights and opportunities, for 'desirable' citizens at least. The nation aimed to attract a well-paid, male, white and skilled labour force to uphold this image.

Non-whites, and even sometimes working women, were seen as a threat to this ideal. Their perceived inferiority meant they were often paid less, and it was believed they could steal employment opportunities, undermining the stability of the white population.

Prior to 1901 the Australian colonies had seen a growth in non-white migration, especially during the gold rushes as many migrants arrived to seek their fortune. Reactions of white Australians to this trend were overwhelmingly negative.

The fact that many migrants had begun to relocate from the gold fields to cities, accepting work at lower rates of pay and selling goods cheaply in competition with white business-owners caused tensions.

This tension was aggravated by the introduction of indentured Pacific Island (known as ‘Kanaka’) labour in the north of Australia. Many people opposed the use of Pacific Island labour because it was a cheap alternative to paying ‘proper’ wages to white employees.

These attitudes led to each colony establishing its own economic and migration policies, some going so far as to exclude anyone of non-British descent.

When Australia federated in 1901, parliamentarians felt it necessary to create a national law for immigration.

The Immigration Restriction Bill was one of the first Bills introduced to the new parliament and proposed a twofold approach to restricting non-white population growth. The Act came into law on 23 December 1901.

The Act gave immigration officers the power to make any non-European migrant sit a 50-word dictation test. This was initially given in any European language, and after 1905 in any prescribed language.

As the language chosen for the dictation test was at the discretion of the immigration officer, it was easy to ensure failure for migrants deemed undesirable, either because of their country of origin, possible criminal record, medical history, or if considered morally unfit.

Extremely small numbers of non-white migrants were ever allowed to pass. The test was administered 1,359 times prior to 1909, with only 52 people granted entry to Australia. After 1909 not a single migrant made to sit the test passed.

Small numbers of migrants were granted certificates of exemption from the test but often exempted people became separated from their friends and family members who did not pass and were deported.

The introduction of two accompanying acts (the Pacific Island Labourers Act 1901 and the Post and Telegraph Act 1901) further limited access to Australia for non-white migrants by outlawing the use of imported labour and making it mandatory to hire white workers on any vessels transporting Australian mail.

The government introduced many programs to encourage migration from Britain to increase Australia’s white population and the available workforce. The schemes were fuelled by the ‘populate or perish’ government mindset, and included the famous the Ten Pound Pom program that operated after the Second World War.

In the late 1940s, it became obvious that British migration was not providing the desired numbers, and that strict adherence to the White Australia policy was an impediment to population growth.

After the Second World War, Arthur Calwell, the Chifley government’s immigration minister, began to relax the policy to allow refugees from continental Europe to come to Australia. This included the ‘beautiful Balts’ whose image perfectly fitted the White Australia ideal, but also migrants from other backgrounds in regulated numbers.

This was the first of a number of steps that gradually eroded the policy until its basic dismantling by the Holt government in 1966. The Whitlam government completely eliminated it in the 1970s with the introduction of policies like the Racial Discrimination Act 1975.

Australia for the Australians, White AustraliaCircular brass badge that has a small decorative scroll across the top, which contains a hole that the badge can be suspended from. On one side "AUSTRALIA FOR THE AUSTRALIANS" is cast in relief around the rim, and "WHITE / AUSTRALIA" is cast in relief on the silver-painted shape of Australia in the voided centre. The other side ...

Sample passages from the 1932 dictation test, National Archives of Australia