2005: The Cronulla race riots in Sydney’s south injure dozens of people and ignite public debate about multiculturalism in Australia 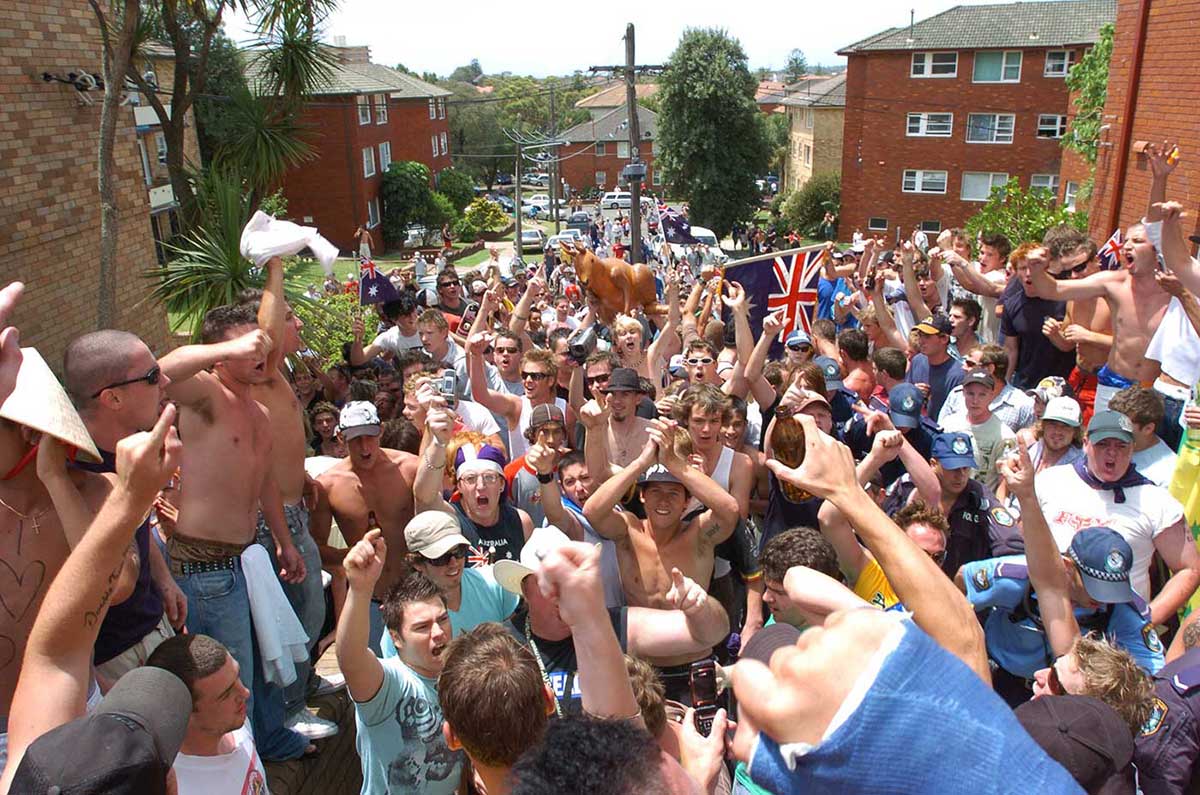 Police and protestors clash in the streets of Cronulla, 2005

On 11 December 2005 over 5,000 mostly Anglo-Australians assembled at Cronulla in Sydney’s south to ‘reclaim the beach from outsiders’. Violence erupted as the crowd attacked people of Middle Eastern appearance, sparking two further days of rioting.

Incited by an attack on surf lifesavers and fuelled by text messages and sections of the media, the riots exposed deep racial tensions.

The Cronulla riot represented not the best, but the worst of national pride … Even so, the overall state of Australian multiculturalism remains strong ... Our diversity is an indivisible part of our national identity.

Cronulla surf beach in Sydney’s Sutherland Shire has long been a popular weekend destination for the local community and for visitors arriving by train from the south-western suburbs.

Since the 1950s different youth cultures have contested ‘ownership’ of the beach. In the 1990s and early 2000s increasing numbers of beachgoers from Middle Eastern backgrounds, and cultural differences in beach behaviour, made the situation more volatile. 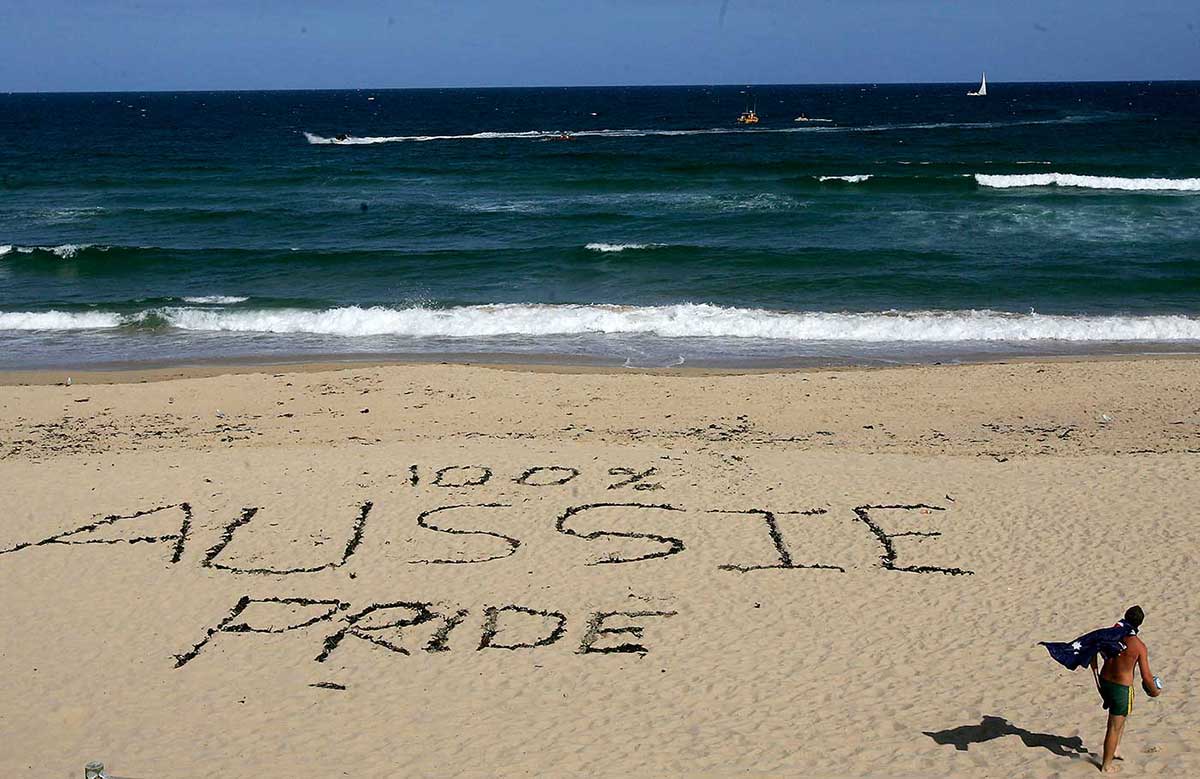 Message written in seaweed on the sand at Cronulla Beach, 2005

Lead up to the riots

On 4 December 2005 a fight broke out at North Cronulla Beach between three lifesavers and a group of young Middle Eastern men. Two lifesavers were injured and one was charged with assault.

The incident sparked a community backlash and the popular commercial media fuelled a week-long campaign of moral outrage. Labelled ‘un-Australian’, the assault on the lifesavers was reported as an attack on ‘Australian values’ and ‘way of life’.

In the days before the riots that ensued, an estimated 270,000 text messages circulated urging ‘Aussies’ to take revenge. One widely publicised message called for a protest to ‘reclaim the beach’:

This Sunday every … Aussie in the Shire get down to North Cronulla to help support Leb and wog bashing day … Bring your mates and let’s show them that this is our beach and they’re never welcome back.

Around 8am on 11 December 2005 groups of young Anglo-Australians gathered at North Cronulla Beach. Many were draped in Australian flags and displayed slogans such as, ‘We grew here, you flew here.'

By 10am the crowd had grown to about 5,000. The Strike Force Neil review of the police response to the riots summarised the morning:

Initially the gathering was peaceful but a number of speakers incited the crowd into a volatile mood that, coupled with excessive alcohol consumption, caused the violence that followed. 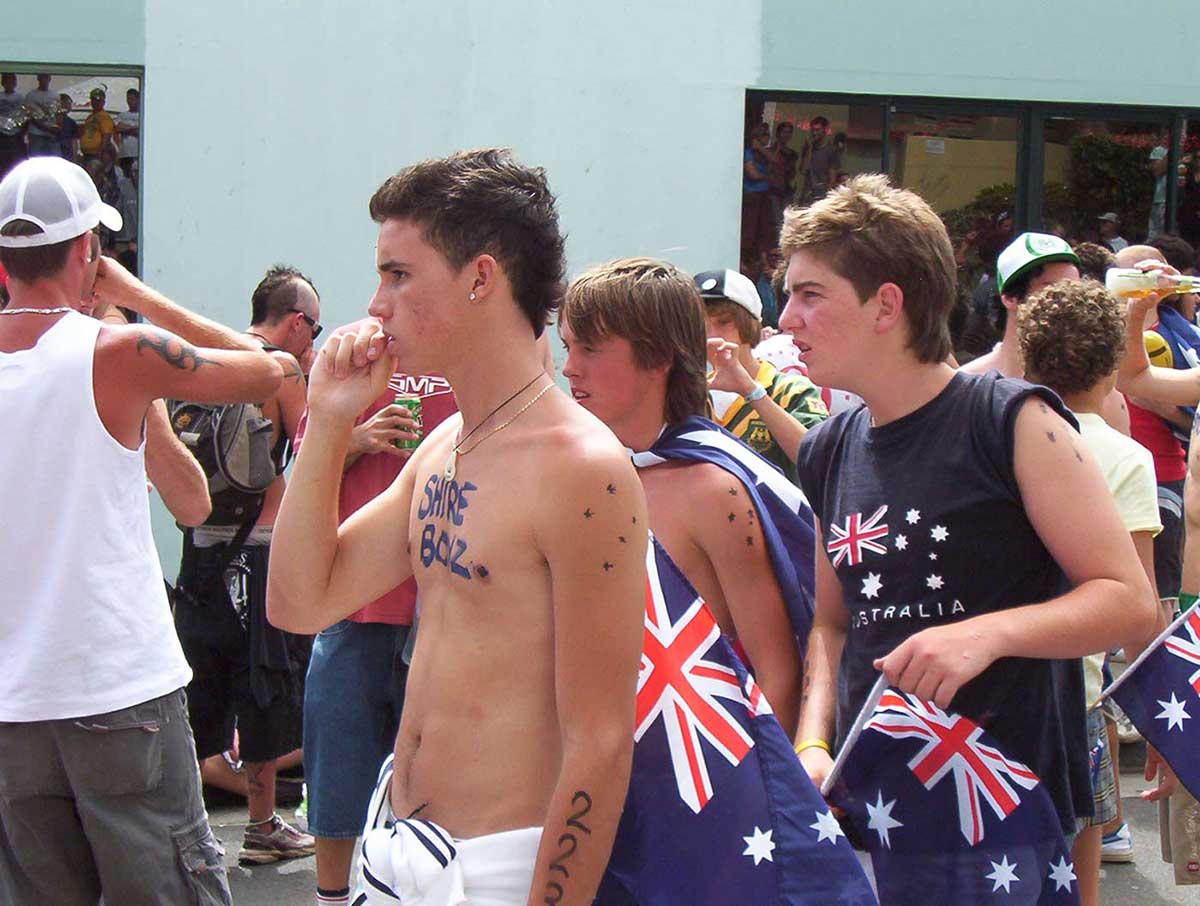 By early afternoon the crowd had spilled into nearby streets, attacking anyone who ‘looked Middle Eastern’. Around 8pm convoys of cars filled with young men from Middle Eastern backgrounds converged in the Cronulla, Brighton-Le-Sands and Maroubra areas, carrying out a series of ‘hit and run’ retaliatory attacks.

Next day rumours were circulating about a possible attack on Lakemba Mosque. By early evening around 4,000 people gathered to protect the mosque, but the attack did not eventuate.

Violent confrontations between police and young men from Middle Eastern backgrounds continued throughout the night in the Cronulla, Maroubra and Brighton-Le-Sands areas.

No incidents of public disorder were reported on 13 December 2005. In total 26 people were injured, 104 arrested and 285 charges were laid. 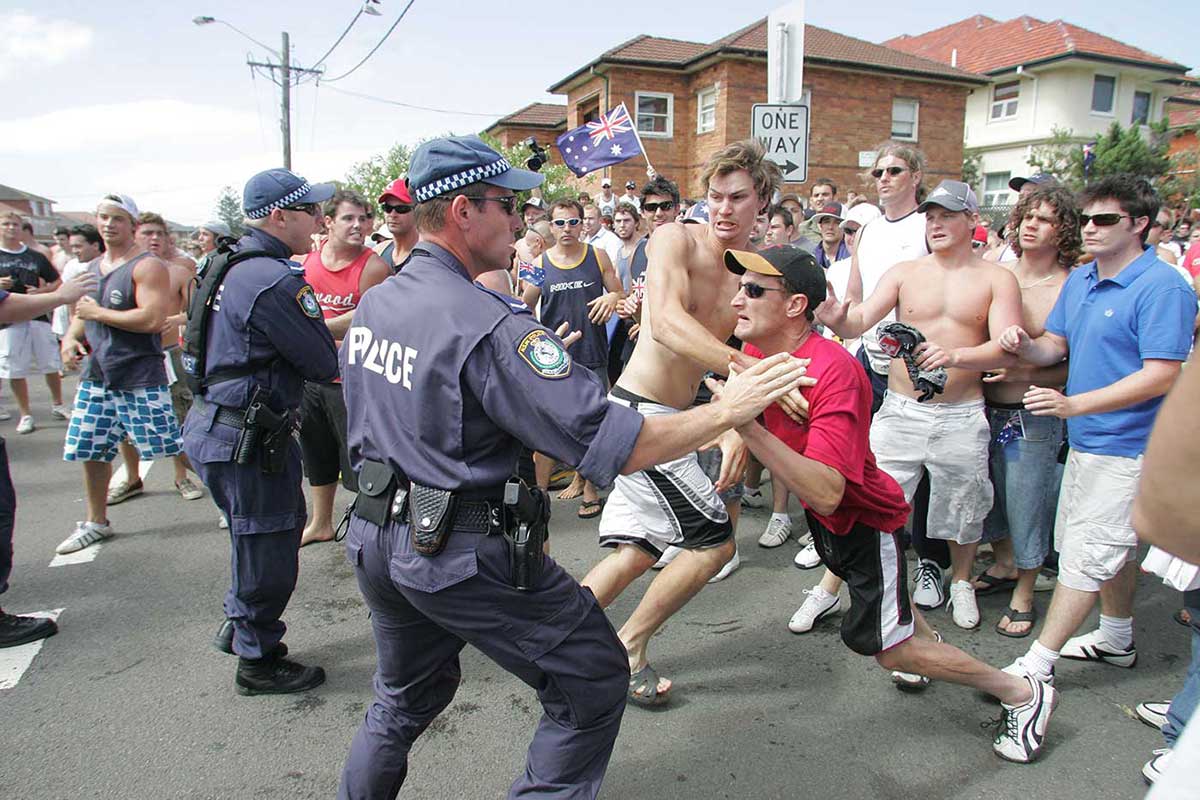 Police and protestors clash at Cronulla, 2005

Reactions to the Cronulla riots

Immediately after the riots newspapers carried headlines such as ‘Our racist shame’ and ‘Our disgrace: Beach riots shame Australia’s values’.

Then Prime Minister John Howard described it as ‘primarily a law and order issue’:

I do not accept that there is underlying racism in this country. I have always taken a more optimistic view of the character of the Australian people. I do not believe Australians are racist.

Lebanese community leaders condemned the violence and the media ‘for focusing on the apparent race and religion’. Eman Dandan, then coordinator of the Lebanese Muslim Association’s welfare centre, commented:

There has always been invisible racism in Australia, unsaid feelings towards certain communities but never expressed publicly … Cronulla riots was an aggressive and frightening expression of this feeling … There was anti-Lebanese and anti-Muslim sentiments, Lebanese and Islam merged into one.

The Strike Force Neil review highlighted operational breakdowns in the police response and identified racism, alcohol consumption and media manipulation as the main causes of the riots. It also criticised talkback radio commentators for fuelling racism and stereotyping Middle Eastern men as a threat to the community. 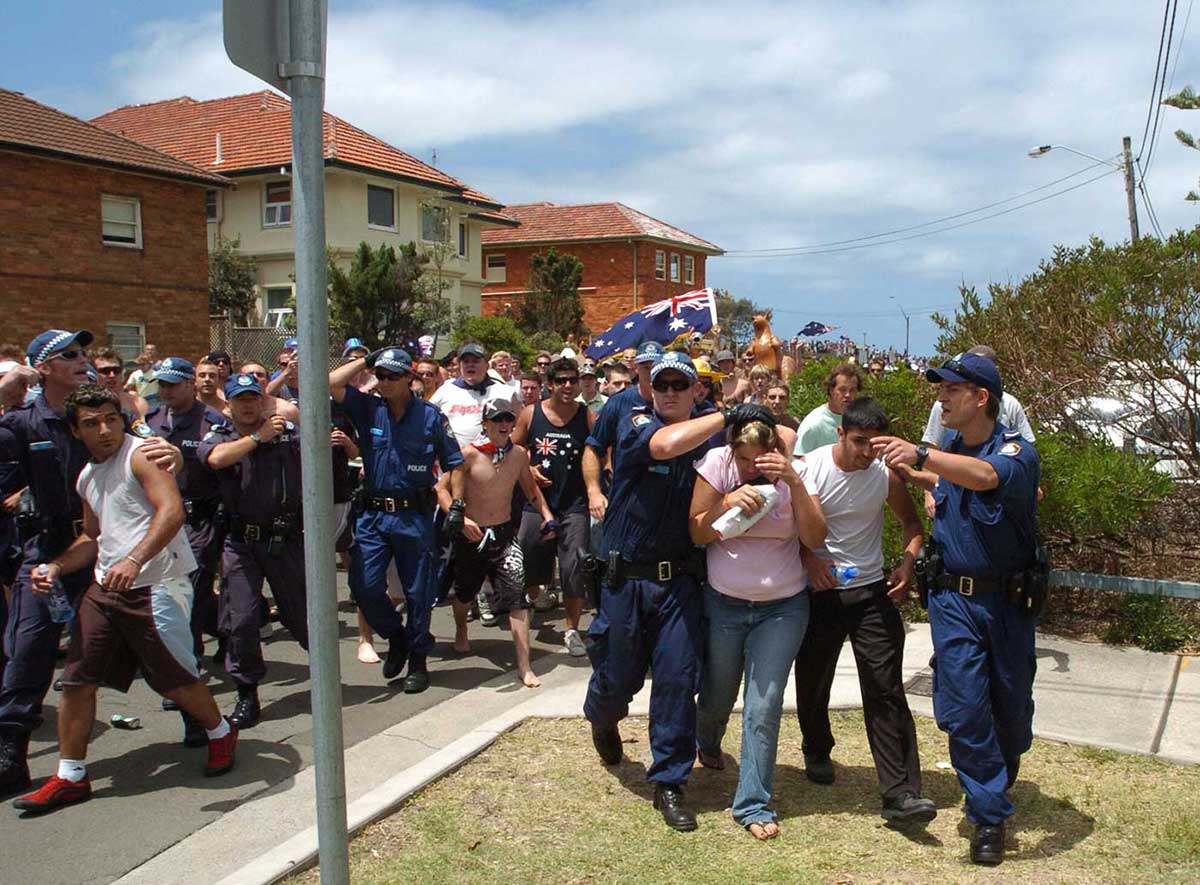 Soon after the riots community and government agencies set up several cross-cultural projects. On the Same Wave encouraged young Muslims to volunteer as surf lifesavers.

The initiative was a public relations success, and images of burkini-clad young women patrolling beaches made headlines around the world. Some of the volunteers found employment as supervisors and swim teachers, and one competed in state, national and world surf lifesaving championships. 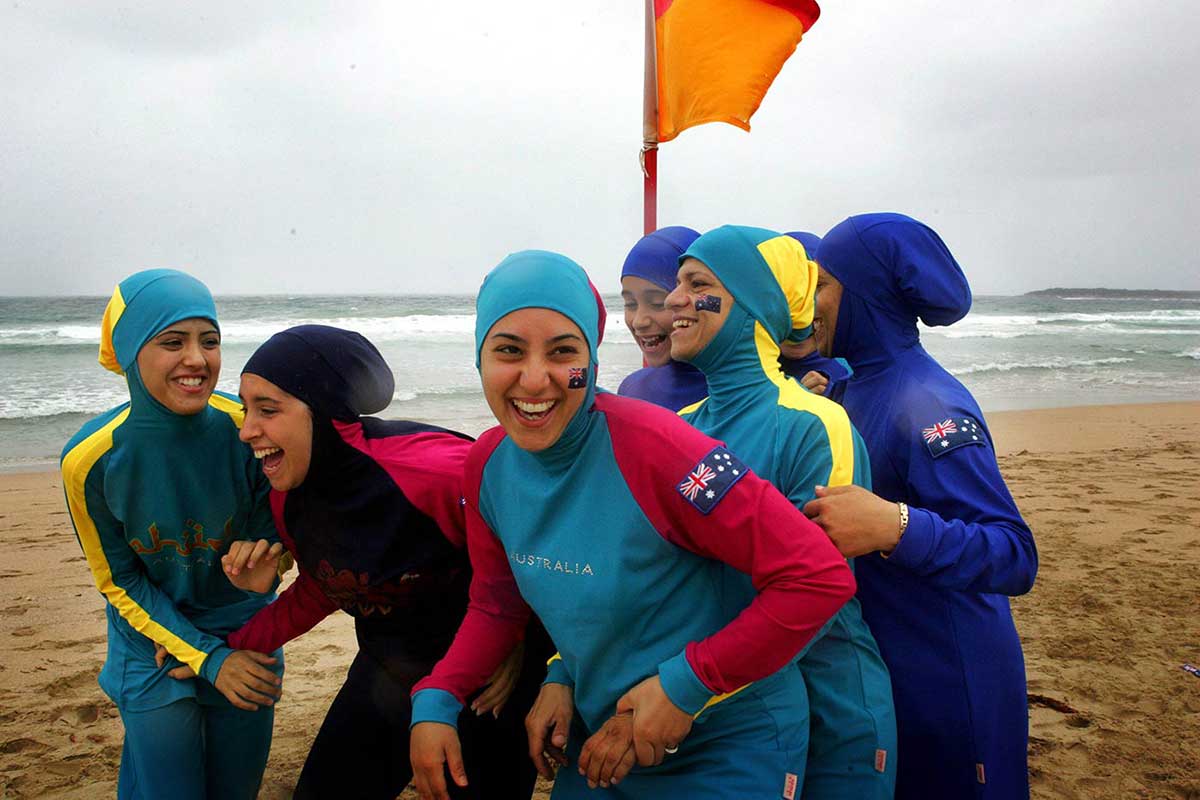 Within two years, however, all the On the Same Wave volunteers had dropped out. The program’s founder, Dr Jamal Rifi, said it was not a failure. Rather it highlighted the need to build bridges between communities.

Since the introduction of multiculturalism in the 1970s its critics have interpreted cultural diversity as a threat to Australia’s traditional values and national identity. In 1988 Opposition Leader John Howard ‘called for the abandonment of the term multiculturalism, and [for] a focus on “One Australia”’.

Events at Cronulla renewed the national debate about multiculturalism and ‘Australian values’. A poll taken just after the riots indicated that 75 per cent of respondents agreed with the idea that there was underlying racism in Australia and 80 per cent supported the official government policy of multiculturalism.

In 2015 a survey of Sydney Muslims found that 57 per cent had experienced racism – three times the rate of other Australians. And Australia’s Race Discrimination Commissioner, Tim Soutphommasane, cautioned that troubling echoes of the Cronulla riots remain.

Political cartoon titled 'Proud to be un-Australian', by Fiona Katauskas, 2005A colour cartoon on paper depicting a group of angry people on the left with two people on the right making the comment 'MAKES ME PROUD / TO BE UNAUSTRALIAN..'. The artist's signature is written along the bottom edge and reads 'Katauskas'.

‘Cronulla riots: The day that shocked the nation’, first aired on SBS 2 on 11 December 2014

Tim Soutphommasane, ‘There are echoes of the Cronulla riots on our streets today’, The Drum, ABC, 11 December 2015