This was a place of refuge for the Endeavour’s crew. For Guugu Yimidhirr and Kuku Yalandji peoples it is where their ancestors encountered Cook. They tell a story of rule-breaking and blood being spilt, of reaching out and reconciliation.

Turtles were at the heart of a dispute that occurred between local people and the voyagers a month into their stay at Endeavour River.

The Endeavour’s crew spent 48 days at Waalumbaal Birri (Endeavour River) repairing the ship and waiting for the right winds to allow them to sail north. This was their longest stop on the Australian coast.

The damaged Endeavour had limped into Waalumbaal Birri after hitting a coral reef several days earlier. Cook and his crew beached the ship on the river’s south bank at Gan-gaarr in the Waymburr clan lands of the Guugu Yimidhirr people. For local people, this was a safe haven governed by cultural protocols. It was also a place where clan business was negotiated and gan-gaarr (quartz crystals) could be found.

Though our bama [people] recognised the predicament these visitors were in, they were discreet because they needed to make sure the visitors were not reincarnations of wawu-ngay, spirits of our ancestors. Every effort was made to be tactful. 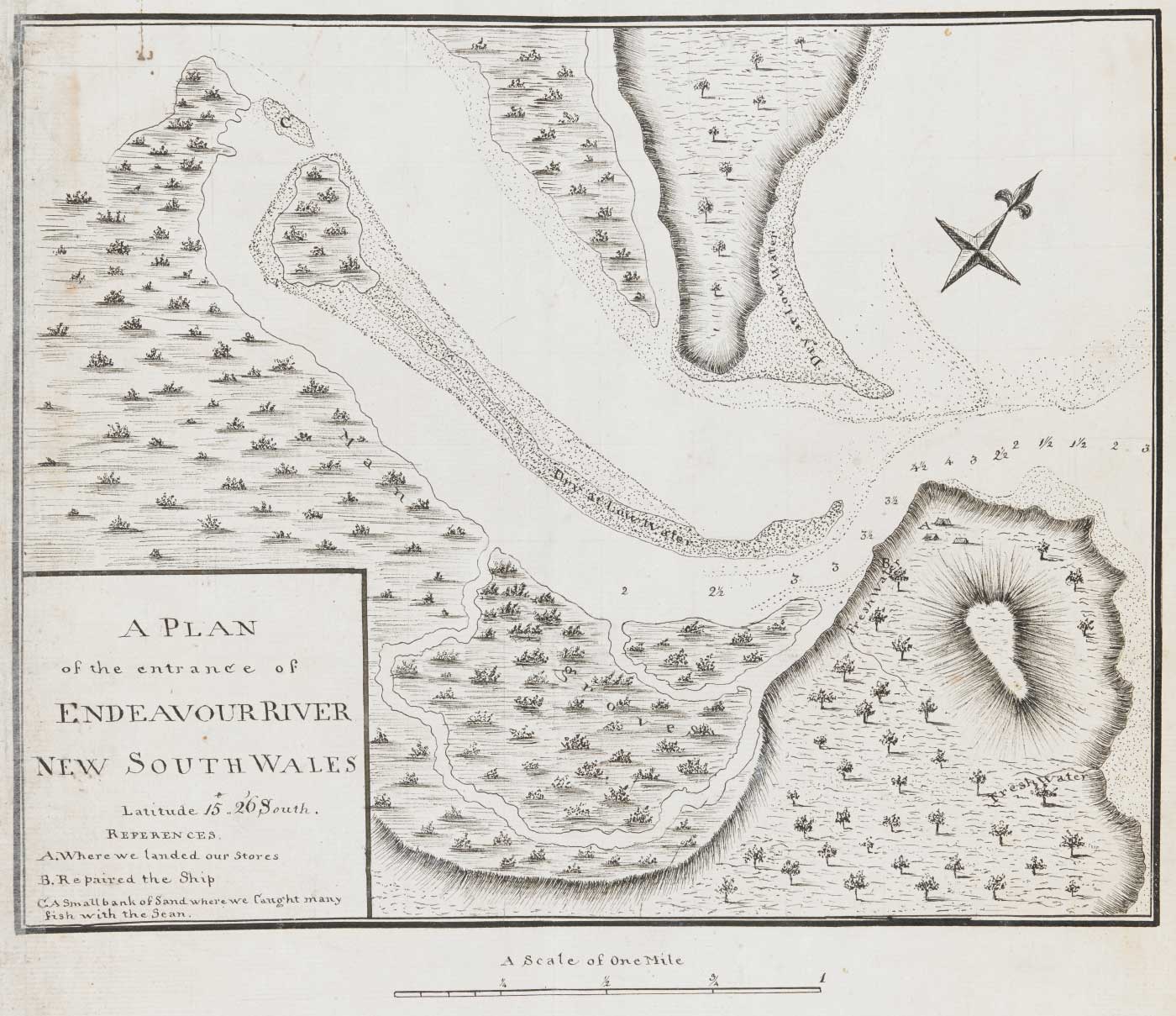 A Plan of the Endeavour River by James Cook

Cook, Banks and Parkinson all described Guugu Yimidhirr people in their journals. With no common language, they focused on what people looked like and the things they wore.

They Painted themselves with white and red. Their ornaments were few: necklaces prettyly enough made of shells, bracelets wore round the upper part of their arms … and the preposterous bone in their noses.

In a stunning display of colour and light, artists from the Hopevale Arts and Culture Centre created works reflecting on Cook and his crew coming into contact with Guugu Yimidhirr people.

Did you know you are speaking a Guugu Yimidhirr word when you say ‘kangaroo’? Put your memory and language skills to the test with this fun game!

Each year, the Cooktown community and tourists from across Australia come together to mark the anniversary of the Endeavour voyage. The festivities are a major event in the region. They feature a celebration of Indigenous culture and an annual re-enactment of Cook's landing and interactions with the Guugu Yimidhirr people in 1770.

Local kids prepare for the main event at the 2018 Cooktown Discovery Festival — the Sunset Warrama (corroboree). The performance includes dance, song, lights and storytelling. Guugu Yimidhirr culture is brought to life through the sharing of stories passed down through generations. One of these is the story of the dhiliibulluu, a ghost who has long arms to reach out and grab small children. Note: this video has no sound.

We need to share our story of the first reconciliation act that happened on this ground. 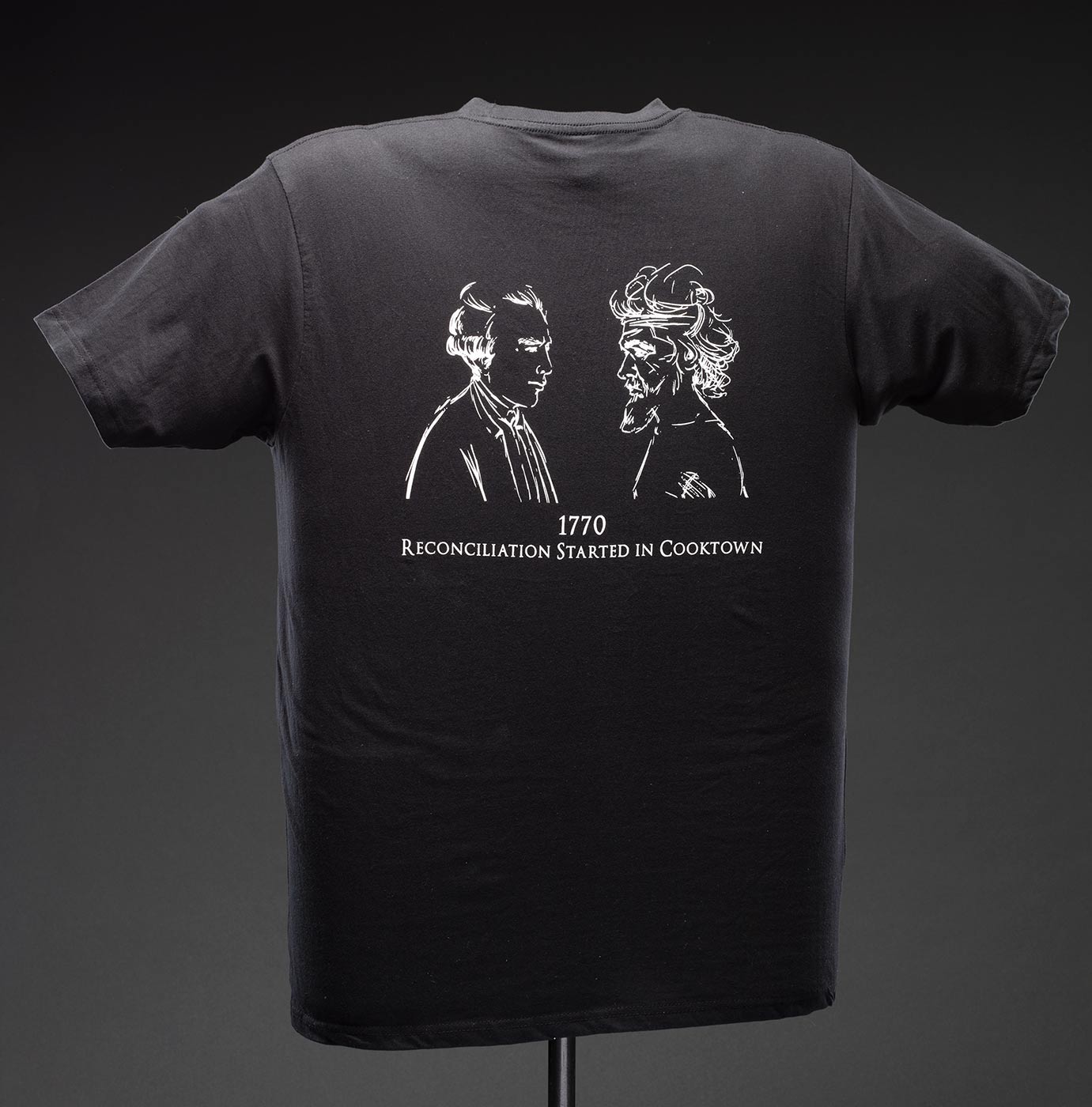 They are the first European drawings made of this ‘leaping quadruped’. It bears no sort of resemblance to any European animal I ever saw.

Banks returned to England with a skull and skin of a kangaroo that he had collected at Waalumbaal Birri. The animal was most likely shot by John Gore, the Endeavour’s third-in-command.

The Cooktown community has re-enacted the Endeavour's arrival for decades. See how the ceremony has evolved, from the Queen's visit in 1970 to the 2018 event.

People from this region have a long tradition of weaving. The Gamba Gamba group meets regularly to create art at the Hopevale Arts and Culture Centre, north of Cooktown.

Botanist Vera Scarth-Johnson moved to Cooktown in 1972. Inspired by the work of Joseph Banks, she set about describing and illustrating the species he had collected in the area. She worked with local elders Thulo Gordon and Eric Deeral to include Indigenous knowledge about the plants. 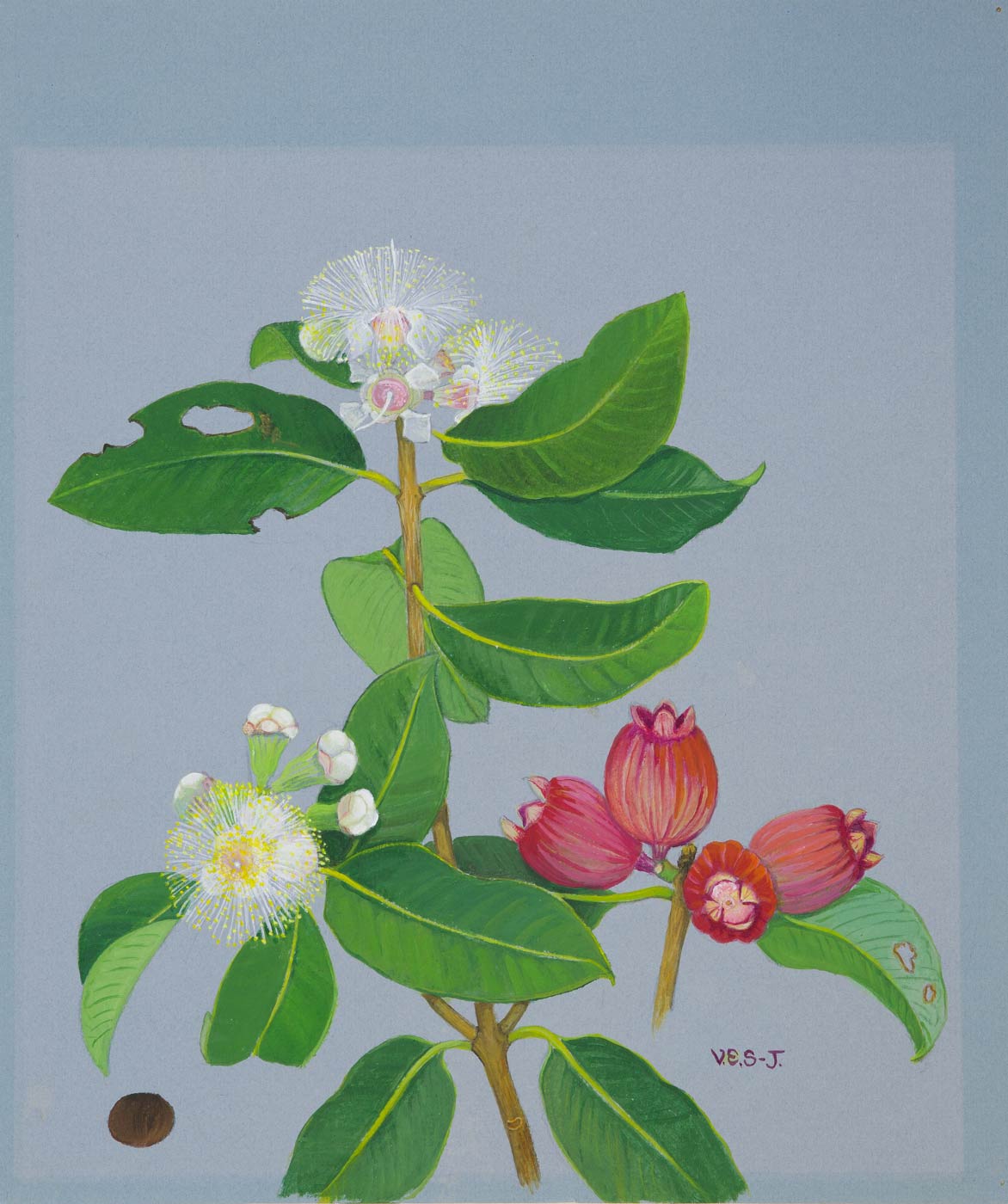 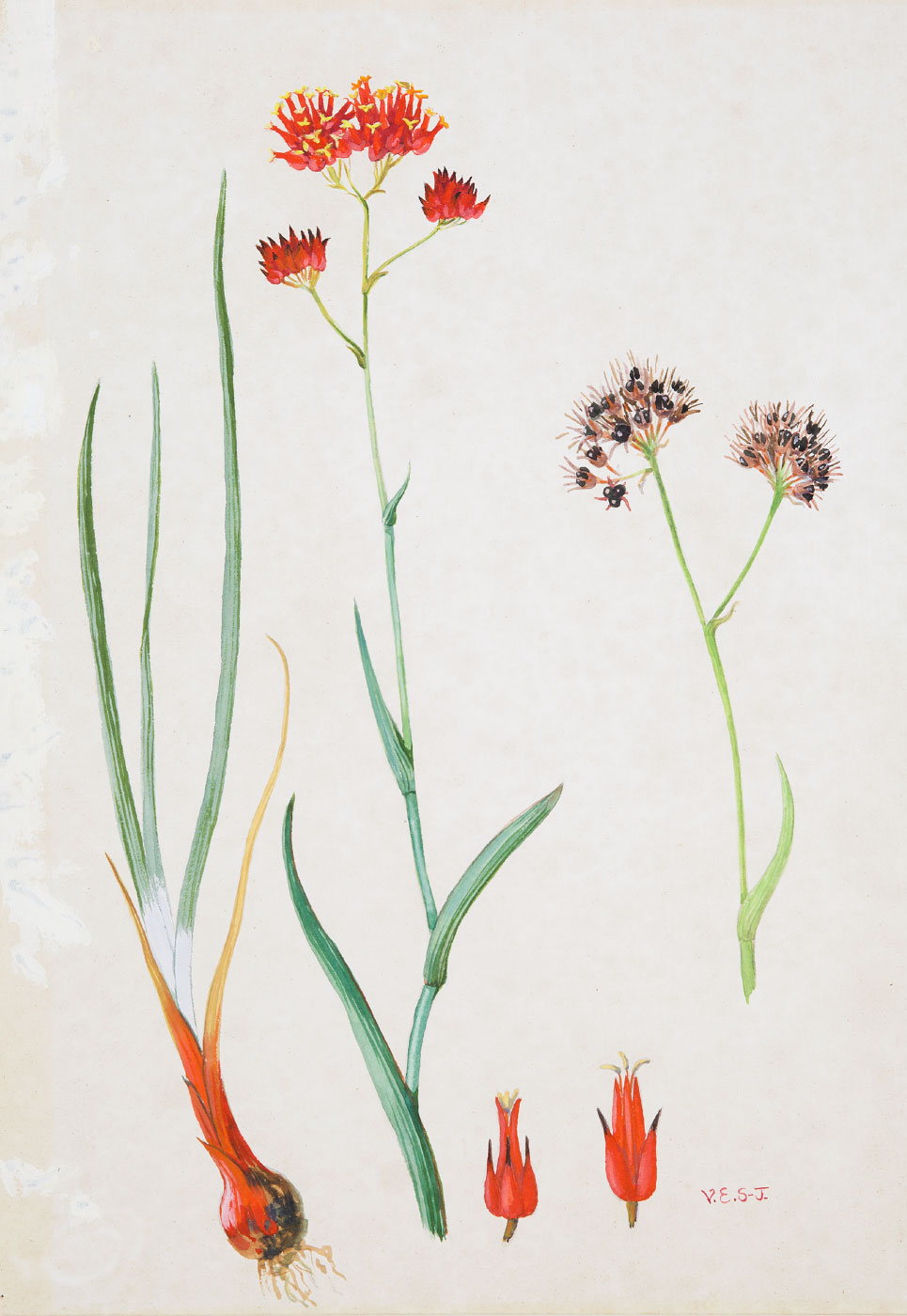 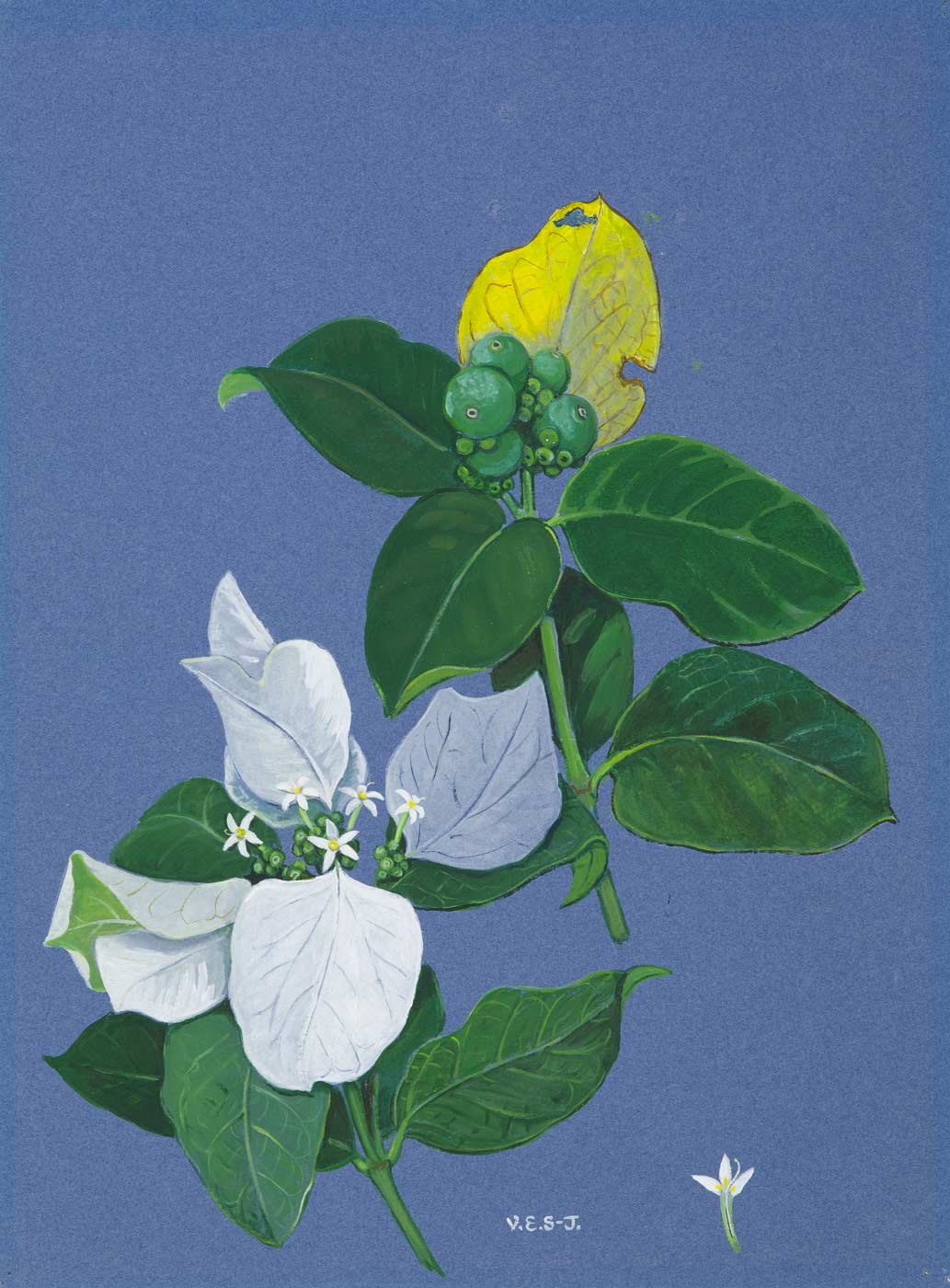 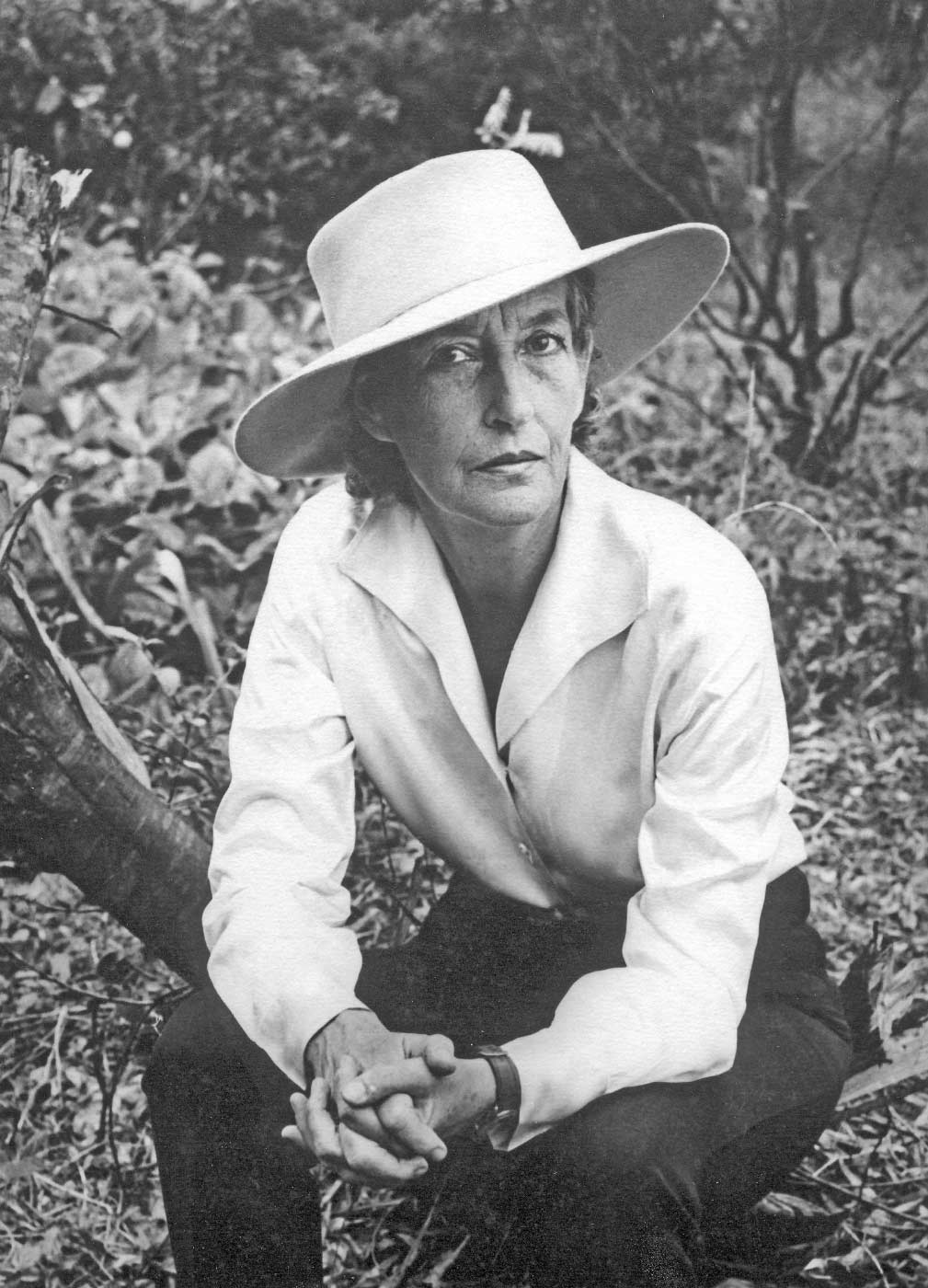 A large tree, very beautiful. Ripe fruit eaten. Wood of a dark grey colour with strange corky concentric rings … [People] from the Johnstone River area used the trunks of this tree for making canoes. The fruit was also used medicinally. Grown from seed.

A red-skinned bulb, hence the name. The flowers are scarlet and the seeds black. A fine strong fibre is found in the tough, drooping leaves. It is used for making dillybags. The plant can be grown from seed or bulb. It makes a good show in the garden if planted in clumps.

A low straggling shrub when in semi-shade; a small compact shrub in full sun. Each flowerhead has a white leaf-like bract which goes yellow with age. Keeps well as a cut flower. May be raised by seed or cutting. Roots used by Aboriginal people to dye apron belts.

Botanists may dissect the flowers, understand them and their ways and still the mystery exists.