The Message — The Story from the Shore

The Message: The Story from the Shore by award-winning filmmaker Alison Page features descendants of those who witnessed James Cook’s passage in 1770.

The Museum commissioned Alison and director Nik Lachajczak to create a short film in collaboration with Indigenous communities along Australia’s east coast. The Message features descendants of people whose ancestors witnessed Cook's passage, powerfully reimagining the message of the Endeavour’s arrival being passed up the coast.

The story of HMB Endeavour's 1770 voyage lies at the core of the Australian nation. Endeavour Voyage: The Untold Stories of Cook and the First Australians exhibition explored views from the ship and shore on the 250th anniversary of the 1770 journey.

Watch filmmaker Alison Page and the Museum's Senior Indigenous Fellow Margo Neale in a special screening of The Message and live stream conversation on YouTube.

Alison Page reflects on the making of The Message.

I had always thought the word ‘warrawarrawa’ meant ‘go away’.

That was the translation of the word inscribed on a simple monument at Captain Cook’s landing place at Kurnell. Go away, I had supposed, because Cook had written in his journal entry for 29 April 1770, ‘as we approached the shore, they all made off except two Men who seem’d resolved to oppose our landing’.

‘Go away’ seemed a logical deduction. But it isn’t true. Certainly, there were two men who seemed apprehensive about the arrival of this ‘big canoe’ — but, as it turns out, this was for very different reasons.

The true translation of ‘warra’ in the Dharawal language is ‘dead’. So what these men were yelling, probably to their own mob, was that these visitors were all dead, they were all ghosts.

Talking to Ray Ingrey of the Gujaga Foundation in La Perouse, I found out that the meaning of ‘warrawarrawa’ relates to our peoples’ deep beliefs about reincarnation.

It’s a story I have heard echoed by Aboriginal people in many parts of Australia, from the southern wilds of Victoria to the tip of Cape York. 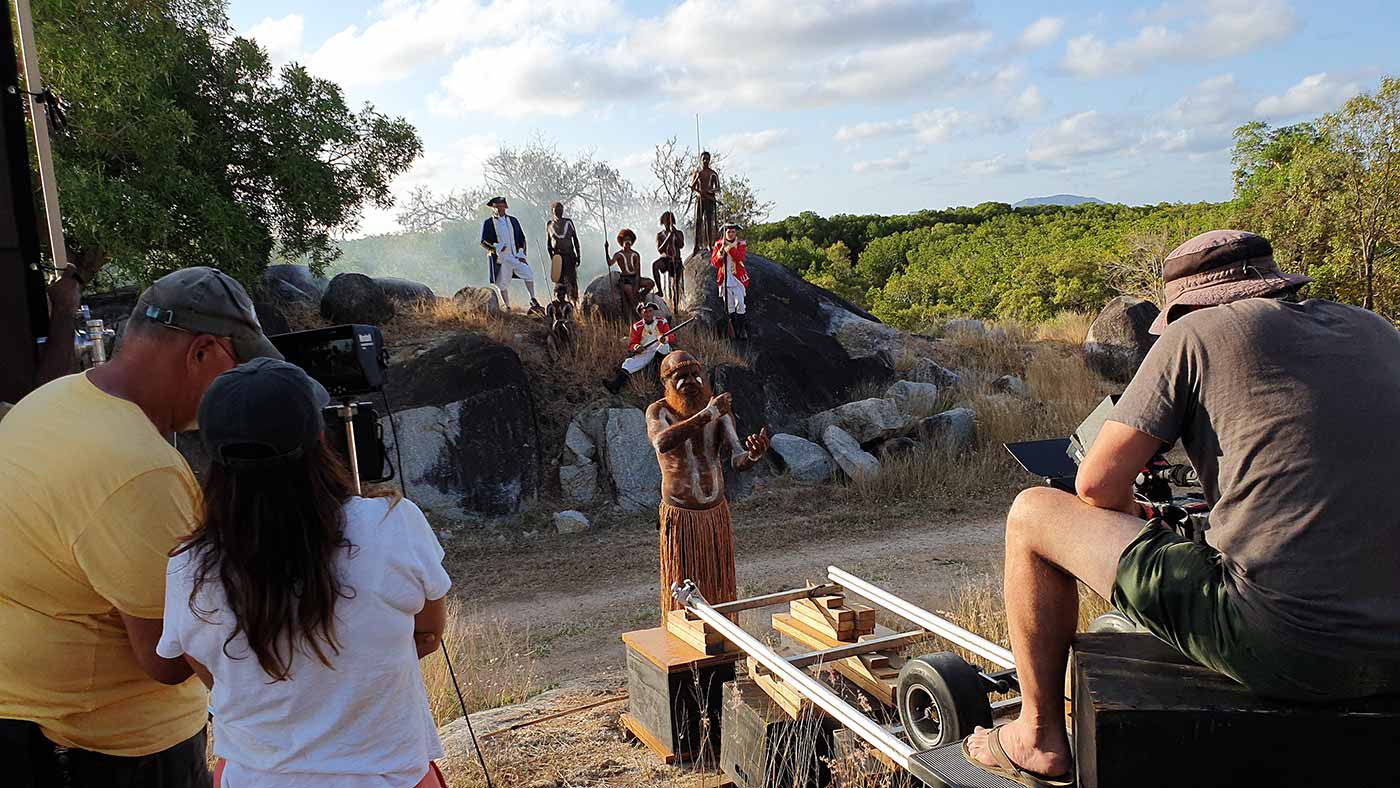 On the set at Reconciliation Rocks

The making of the immersive film experience The Message for the National Museum of Australia’s Endeavour Voyage exhibition contributes to a greater narrative that seeks to tell the true history of modern Australia. To play a part in this work is both an incredible honour and a great responsibility.

But sitting in the makeshift recording studio we had set up at the beach in Cape York, listening to Kaurareg/Gudang Yadhaykenu man Tommy Savage sing a song called ‘Murkai gule’ (Ghost ship), I felt suddenly overcome by the full weight of that responsibility. The song had never been recorded for a film before. Tommy’s community, like many others, has been waiting a very long time to tell their side of the story.

I had been asked to collaborate with four different communities along the east coast — Narooma, Kamay, Waalumbaal Birri and Possession Island — to create a 10–12-minute piece of cinema. While my practice is built on co-creation, this was the largest engagement process I had ever been asked to do.

The Museum was empowering communities to tell, often for the first time, the story of the Endeavour voyage from an Aboriginal perspective. This is not only important for them, but also hugely significant for the whole nation.

From the scripting to the casting, the communities we worked with were intensively involved, making it a culturally rich experience for everyone engaged on the film.

Ricky and Richard Campbell, who play the two warriors who meet Cook and his men at Kamay (Botany Bay), are descendants of those who were there in 1770, as were all of the actors engaged in the piece. They were occupying the skin of their ancestors at the very moment when those two cultures and knowledge systems collided 250 years ago.

The temptation for all of us was to approach this like a drama — a straight telling of the story to dispense with obscurity and make the history clear. After all, the Guugu Yimidhirr people of Cooktown proudly re-enact, in a theatrical way, the seminal moments of their story at an annual festival on the anniversary of Cook’s arrival. 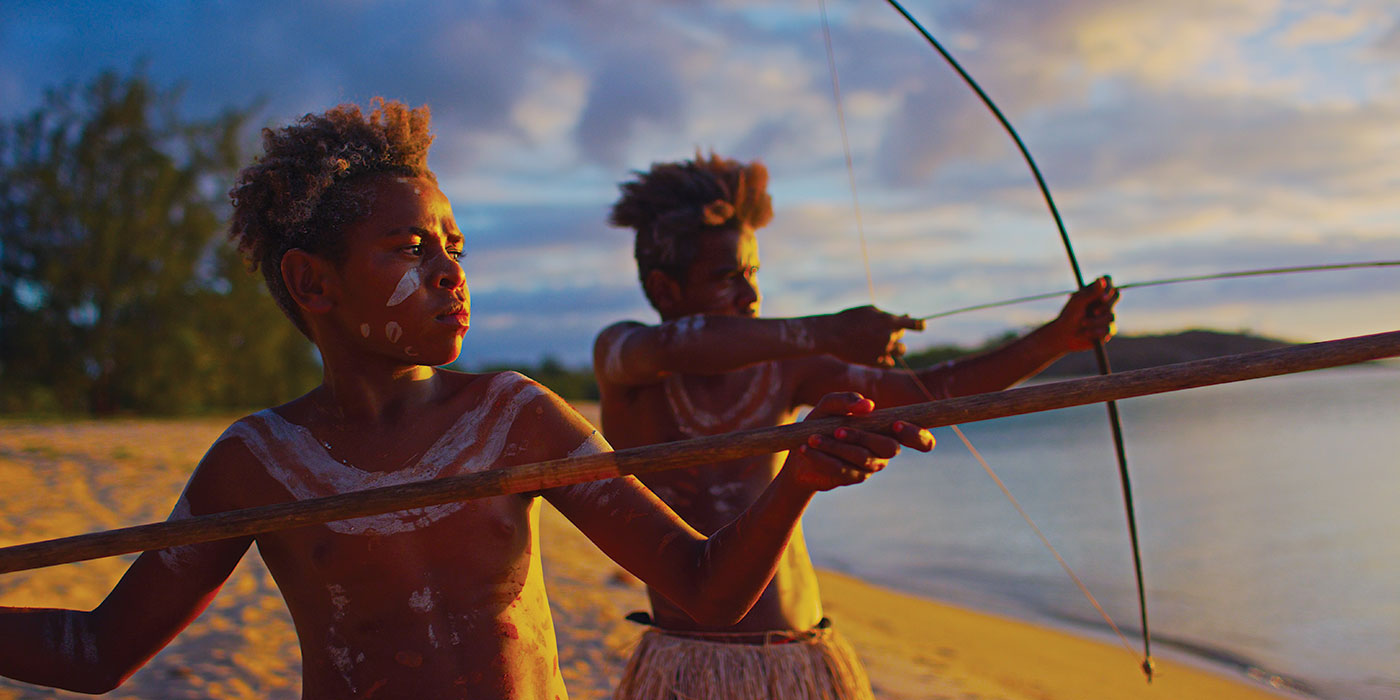 But we — myself and Nik Lachajczak, through our creative partnership ZakPage Storytelling — had been commissioned to make a new media art experience which, through rich cinematography, song and evocative sound, was to encapsulate the emotional symbolism of the chapters of the story.

Like Aboriginal painting, the meaning takes deep diving to fully understand all its layers. While some of the scenes will reflect historical perspective and records, our main aim was to engender a visceral and emotive response through a highly engaging and sometimes challenging visual narrative.

Thankfully, this approach was embraced by the communities involved, especially when the narrative centred on the effective sharing of the message about these ghostly visitors by ingenious methods of communication such as smoke, message stick and bullroarer. As this ship sailed up the east coast, our people united to drive this message north. 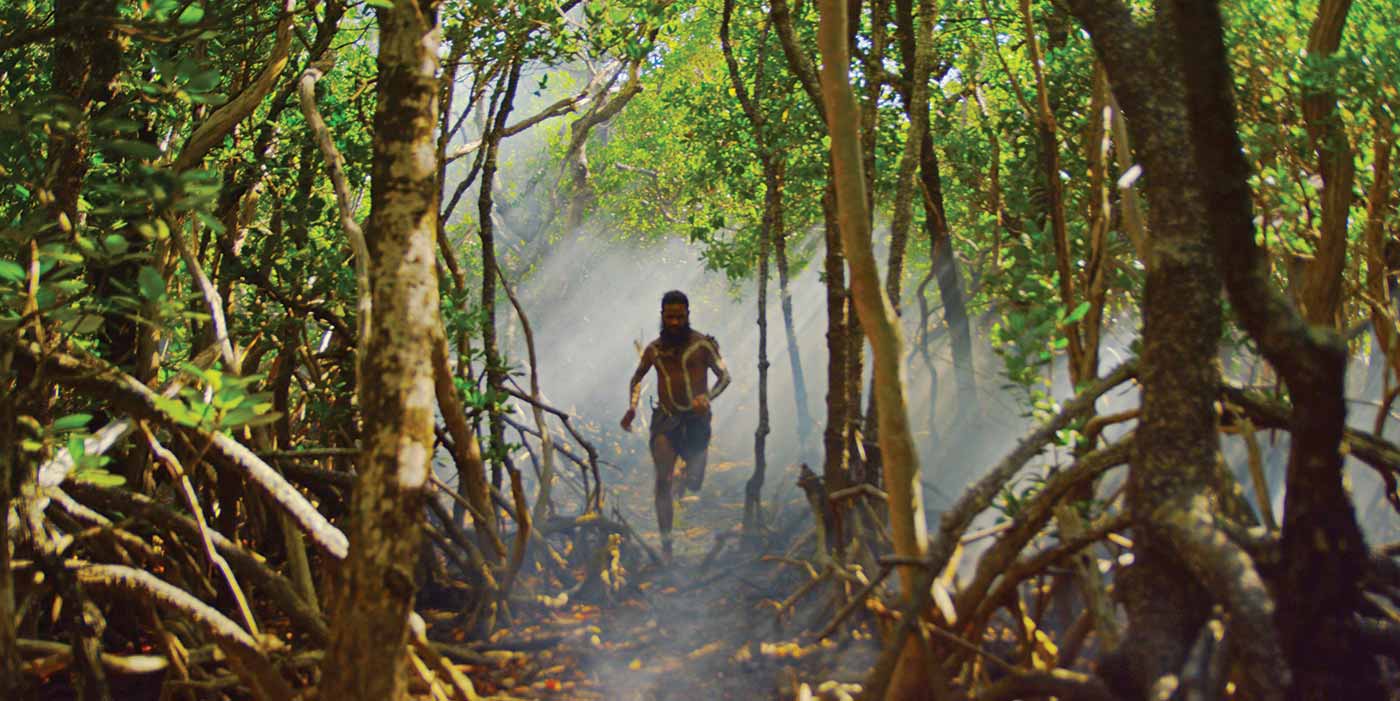 To create a sense of immersion in the gallery space, the viewing space is set up as a ceremonial ground as if the film is a new media version of a song cycle where the telling of Australia’s earliest contact with whitefellas had been repeatedly told for generations over the past 250 years.

While audiences would focus on the main, central screen, five shield-shaped screens cut into the curved wall on opposite sides would encircle the viewer, making them feel part of the song cycle and the retelling of the story in the Aboriginal way. 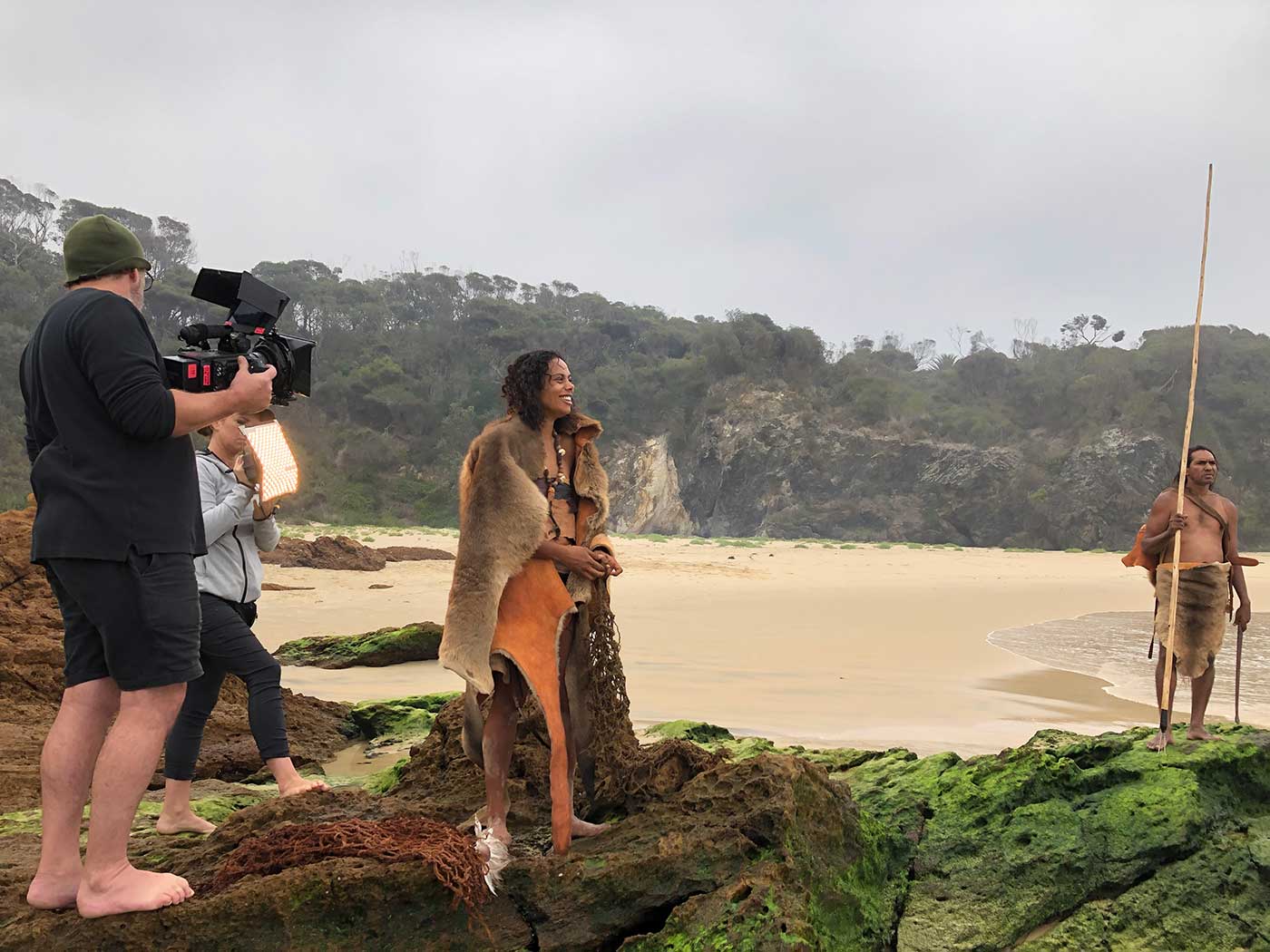 Working with my own mob at both Narooma and La Perouse (Kamay) during the film’s production I have learned so much about the nuances of our spiritual beliefs and language.

With the Guguu Yimidhirr people at Cooktown, I could see why they were so proud of their encounters with Cook: their ancestors’ environmental activism when Cook and his men over-fished, followed by the extraordinary act of leadership shown by the little old man breaking a spear and offering it to the visitors as a gesture of peace.

The production, of course, was not without its challenges. Kicking off in September 2019, we began shooting just as Australia was entering into a catastrophic summer of intense wildfires and record temperatures. The numerous times Banks described seeing smoke and fires along the Australian coast, he certainly was not witnessing out-of-control bushfires. He was seeing controlled burns and messages in smoke.

But the life-changing aspect of working on this film for me was learning about the origin story of modern Australia — a story that has never been properly told because only one side of this history has been recorded until now.

What we all have to gain from knowing our true history is a much better understanding of our identity as a nation.

While these fleeting encounters in 1770 probably left both Indigenous people and Cook somewhat confused, by investigating the divergent and sometimes buried views of history, we have the opportunity now to create a new Australian narrative that is built on the best of both cultures.

While we are fully aware of the virtues of Western culture, it is the values at the heart of Indigenous culture — an ancient and enduring legacy of traditional ecological knowledge that truly cares for the land, the sky, the sea and the people — that we all need to rediscover and embrace.

My dad is an Aboriginal man from La Perouse on the southern shores of Botany Bay, and my mum is a ‘ten-pound pom’, so in some ways you could say I am a descendant of both sides of this story.

I know Captain Cook was the catalyst for a devastating change to a cultural continuum of more than 65,000 years, but I believe that on the 250th anniversary of that voyage we can start a dialogue that will ultimately lead to a true meeting of minds.

This film may be one of the first times ‘the message’ from the shore has been integrated into a single artwork, but it certainly won’t be the last. The stories from the ship and from the shore will be explored by many other artists, historians and communities for centuries to come. It is through these creative and investigative interventions that we will finally discover ourselves as a nation.

Alison Page is a descendant of the Walbanga and Wadi Wadi people of the Yuin nation. She is a leading force in the Australian design scene, championing the creative expression of Aboriginal identity in interiors, public art, jewellery, installations and film. Alison is an Adjunct Associate Professor at the University of New South Wales, a Council member of the Australian National Maritime Museum and Chair of the National Centre of Indigenous Excellence. She is currently Director of the National Australia Day Council and a member of the National Museum's Indigenous Reference Group.