Like at Botany Bay, the visitors struggled to understand the Indigenous people at Waalumbaal Birri. When they broke protocols around catching turtles, there was conflict with local Guugu Yimidhirr people. The conflict ended in a powerful moment of reconciliation between an Elder and James Cook. This is a story that Guugu Yimidhirr people today would like all Australians to know.

Part one: Breaking the rules The Boat returnd from the reef bringing 4 Turtles, so we may now be said to swim in Plenty. Most of those we have caught have been green turtle from 2 to 300 lb weight.

While the ship was being repaired, Cook instructed his crew to gather supplies for the long voyage north. In a few days, they had caught 12 large green turtles.

One morning 10 of our Bama [people] were invited to inspect the visitors’ boat. To their horror, they saw a number of turtles on board. When they asked if they could have one, they were refused.

They soon let us know their errand … to get one of our Turtle of which we had 8 or 9 laying upon the decks. They first by signs askd for One and on being refusd shewd great marks of Resentment; one who had askd me on my refusal stamping with his foot pushd me from him with a countenance full of disdain.

Part two: Blood on the ground 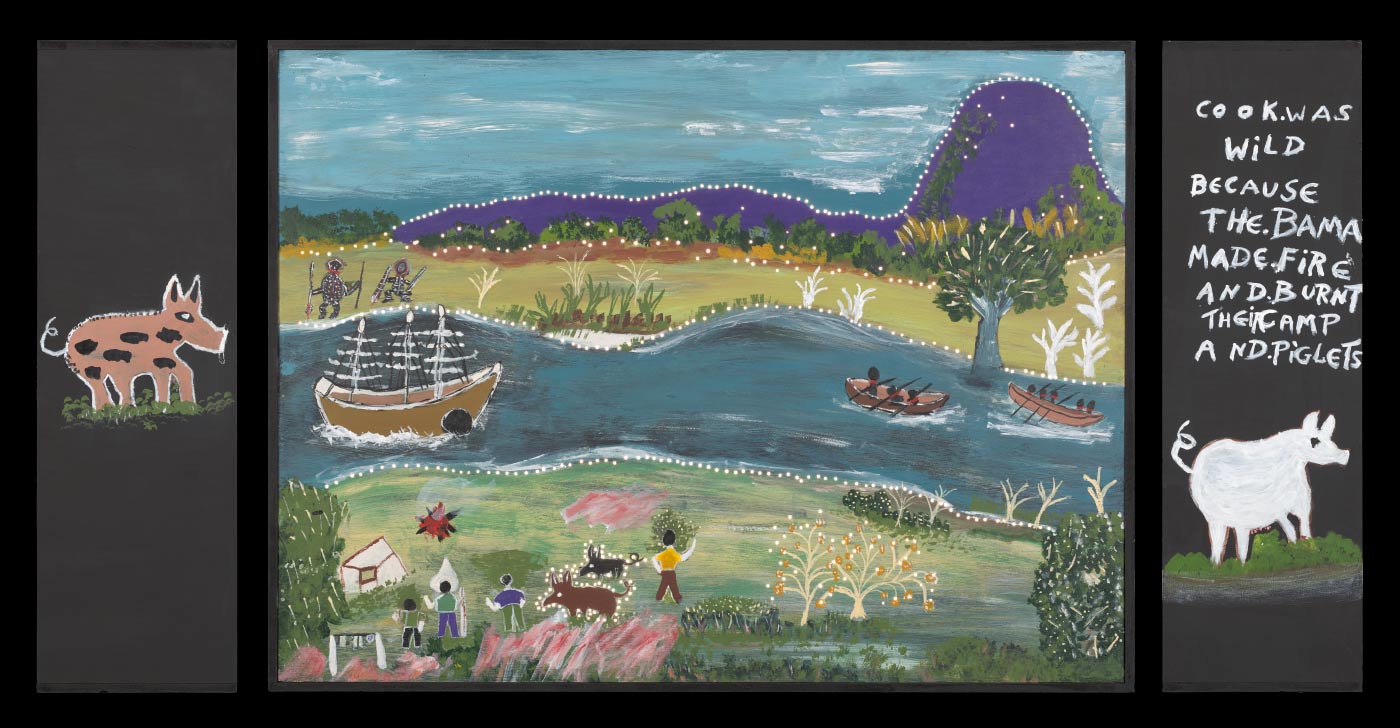 To our Bama it became an offence. The sharing code was broken. The visitors had trespassed.

They seizd their arms in an instant, and taking fire from under a pitch kettle which was boiling they began to set fire to the grass to windward of the few things we had left ashore with surprizing dexterity and quickness.

I was obliged to fire a musquet load with small shott at one of the ring leaders which sent them off … one must have been a little hurt because we saw ... blood. 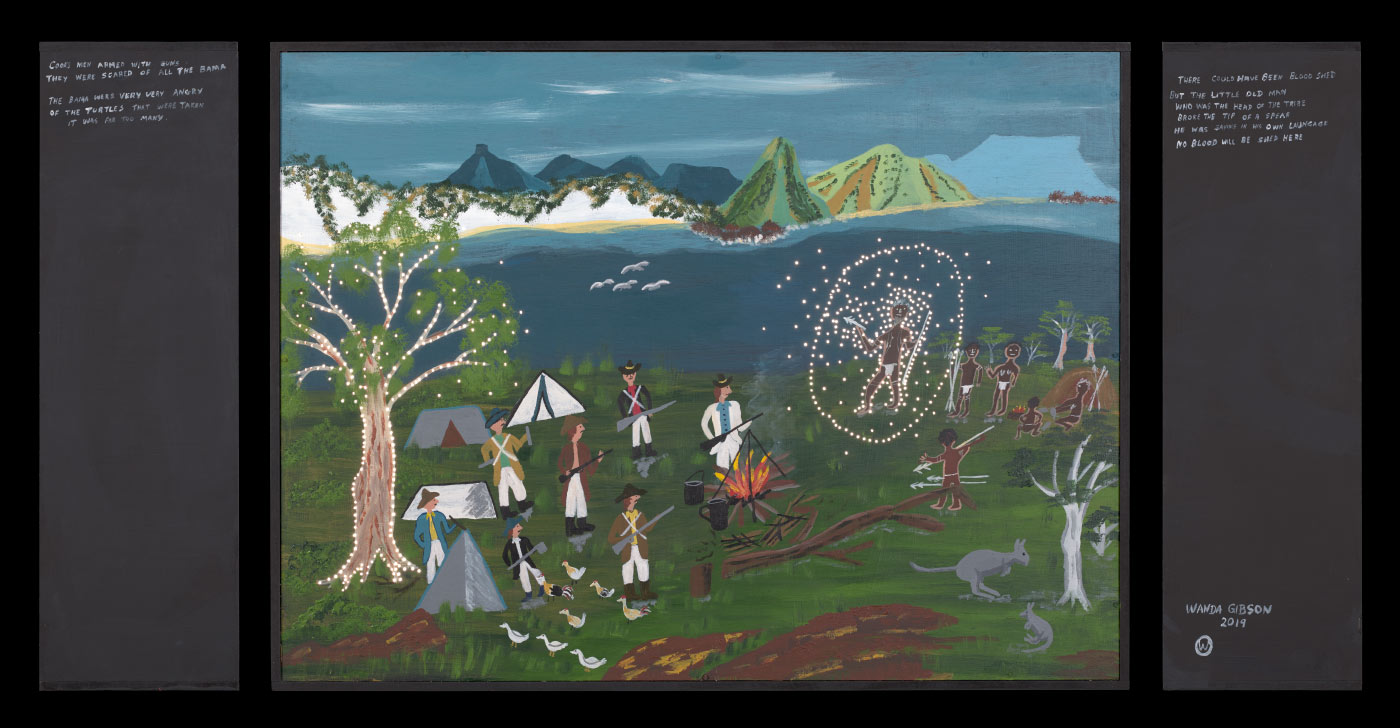 No Blood Will Be Shed by Wanda Gibson

After Cook had wounded the man, an elder approached and performed Nagaalangun daamaay ritual.

[He] came forward to us carrying … a lance without a point. He halted several times and … employd himself in collecting the moisture from under his arm pit with his finger which he every time drew through his mouth. We beckond to him to come: he then spoke to the others who all laid their lances against a tree and leaving them came forwards.

He was blowing his sweat over them … that’s what we do when people come onto our country. We smother them in our scent. It resets things and makes us all equal. 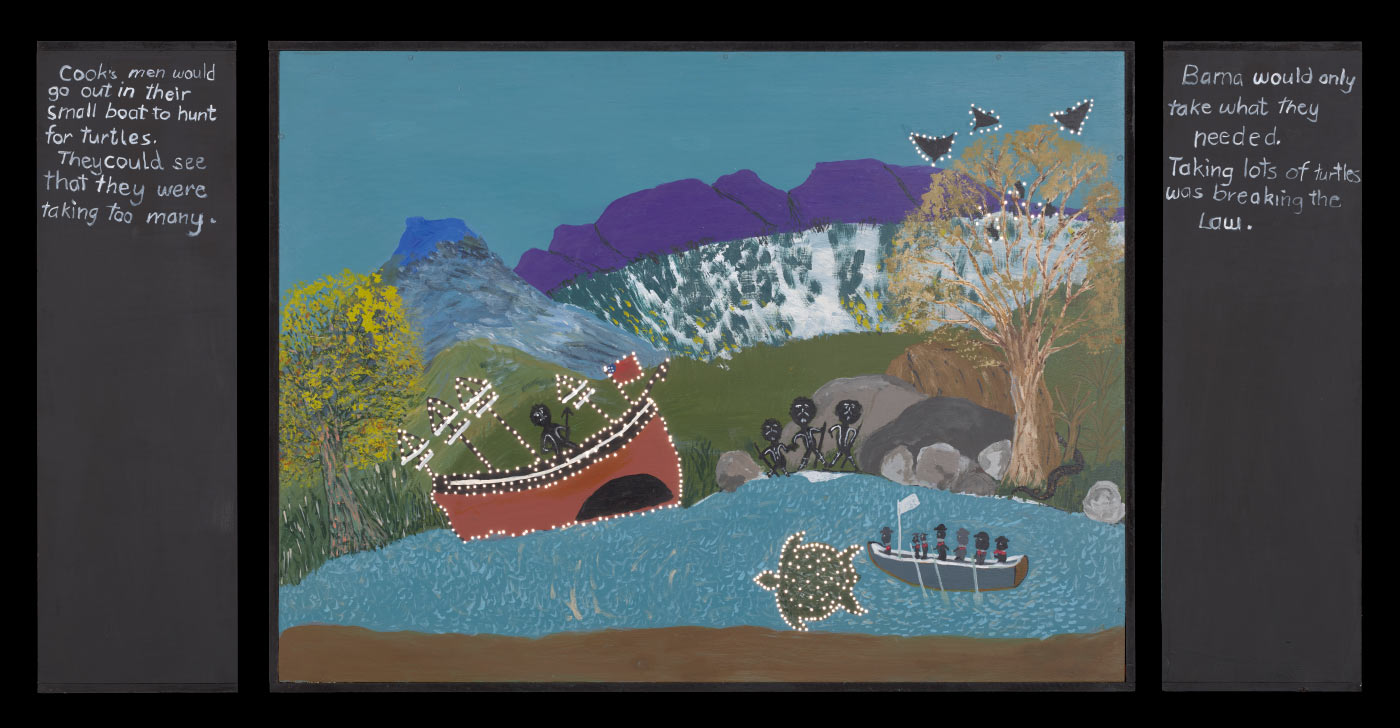 After the Nagaalangun daamaay ritual, Cook returned the spears he had confiscated.

We now return’d them the darts we had taken from them which reconciled every thing.

He recognised that those spears were of great importance to Bama … so he gave it back to them. It was a physical thing.