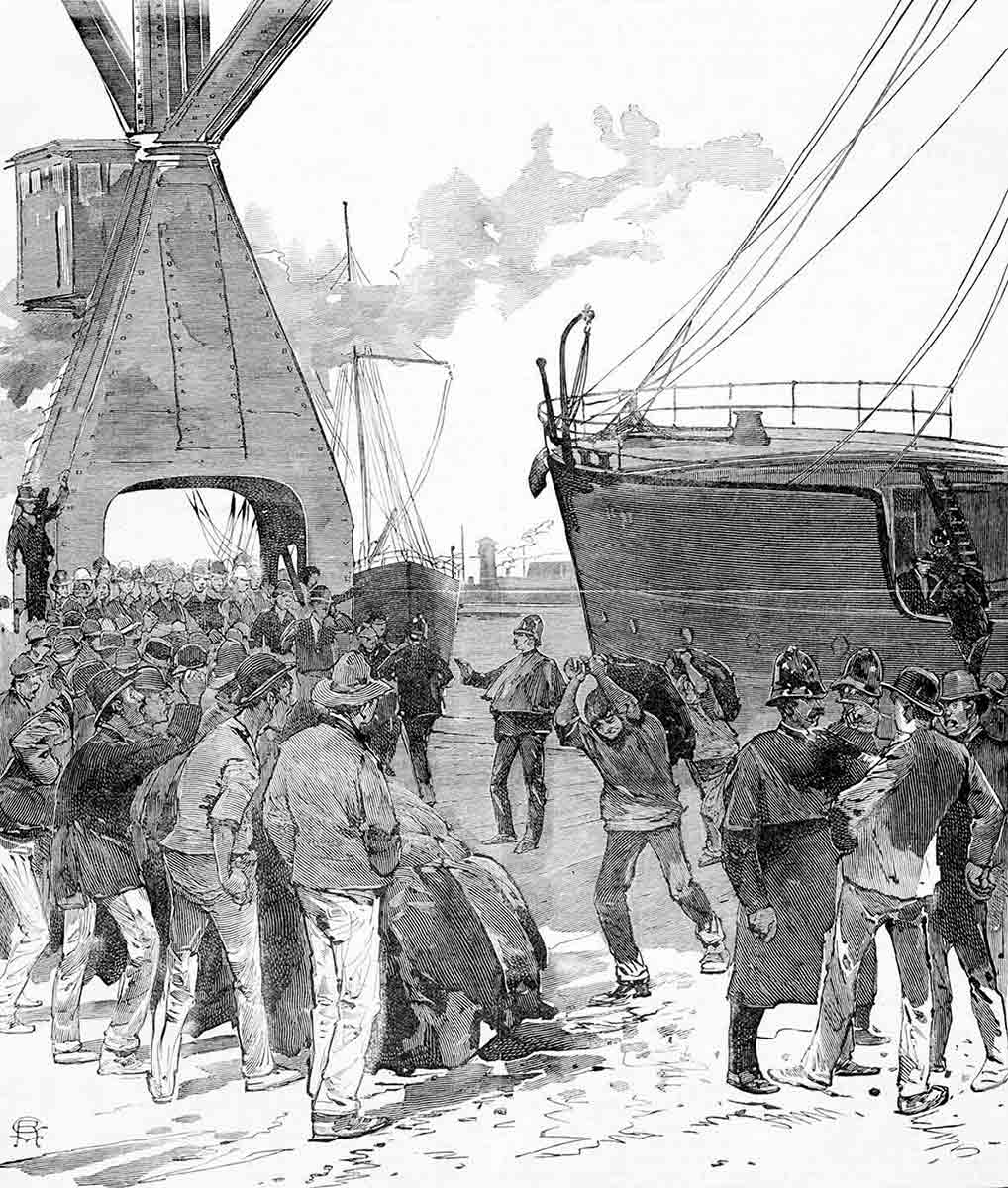 Wharf labourers working under police protection during the 1890 maritime strike

In 1885 the Victorian Employers’ Union (VEU) was founded in reaction to organised labour’s industrial action during the bootmakers’ strike the previous year.

In the 1890 maritime strike, the largest in Australia until that date, the VEU’s ability to organise employers to form a united front allowed them to defeat the labour unions.

The VEU became the colony’s peak representative body for employers in arbitration negotiations with labour unions, and was the forerunner of today’s Australian Chamber of Commerce and Industry.

Melbourne businessman, John Munro Bruce, present at the founding of the VEU in 1885:

The proposed union would be launched on a liberal basis, which would ensure confidence on all sides, and be a means of settling all disputes which might arise between employer and employee …

The first unions in Australia were formed in Sydney in the 1820s.

Throughout most of the 19th century the environment for labour organisation was opposed by employers and government but by 1869 around 400 unions had been established across the country.

The Operative Bootmakers Union was formed in 1879 in Melbourne and three years later had more than 1,000 members.

In 1882 the union submitted a list of requirements to employers that would make wages and working conditions consistent across the industry. After two years of fruitless negotiation, the union took strike action.

The bootmakers were led by the firebrand organiser Billy Trenwith who coordinated the effort from the Melbourne Trades Hall and gained support from affiliated trade unions inside and outside Victoria.

The Trades Hall had become the general representative body for Victorian unions in a time of rapid labour organisation. In 1880 a dozen unions had taken part in Trades Hall actions while five years later more than 50 were involved.

In 1884 the Operative Bootmakers’ Union had compelled employers to accept their demands and a board of conciliation had been created. The bootmakers’ strike became a model in labour’s ongoing struggle against sweatshop working conditions. It was the first large-scale labour conflict in which a number of unions worked together against employers.

The strike also became the catalyst for the creation of Australia’s first union of employers – the Victorian Employers’ Union (VEU). The bootmakers’ strike had shown employers to be unorganised, divided and poorly led. It became clear to employers that they were going to have to organise on a permanent basis.

Formation of the Victorian Employers’ Union

On a warm afternoon on 13 March 1885 a ‘well-attended gathering of gentlemen’ was held at the Athenaeum Hall in Melbourne.

Bruce Smith, an employers’ representative on the bootmakers’ strike arbitration committee and soon to be the first president of the VEU, observed that during the strike negotiations, ‘on every occasion when a difference had arisen they [the employers] had been beaten and consequently had had to pay higher wages and reduce the number of working hours’.

A motion was passed ‘recognizing the urgent necessity for action amongst all employers of labour … and now form into a union’.

Within 12 months of its formation, the VEU had established a board of conciliation in conjunction with the Trades Hall Council to handle a dispute between the Wharf Laborers’ Union and Melbourne shipowners.

Over the next few years the VEU went on to become the major representative body for Victorian employers in arbitration with labour unions.

On 16 August 1890 the Mercantile Maritime Officers’ Association went out on strike. Their concern was with shipowners restricting officers’ ability to unionise and affiliate with other unions.

The Melbourne Trades Hall backed the maritime officers and over the next six weeks, wharf labourers, gas stokers, coalminers, transport unionists and shearers in Victoria, South Australia, New South Wales and Queensland went out on strike in support.

By the end of September, 60,000 people had joined, making it the largest industrial action in Australian history to date. But the VEU and its affiliated colonial employers’ unions were prepared for such a large-scale action.

When the unions went on strike, the shipowners, with the backing of the employer unions, did not negotiate and instead engaged non-unionist ‘scab’ workers.

The unions set up pickets around worksites to bar entry to scab labour but employers were supported by the police and private militias who protected non-unionists as they passed the barriers. The strike became increasingly violent and the unions did not have the resources or the government backing to outlast the employers.

When the action ended in November 1890, the unions were depleted of their emergency funds and had achieved none of their goals. The crushing of the strike was an emphatic win for the employers’ unions.

For labour unions it led to the realisation that industrial action alone couldn’t achieve their goals and within a year the Australian Labor Party had been formed.

Evolution of the Victorian Employers’ Union

In 1902 the VEU formed the Victorian Employers’ Federation with the idea of expanding its operations further into political matters. In 1903 the VEU was absorbed into the VEF and in 1904 it joined with other state employer federations around the nation to form the Australian Council of Employer Federations (ACEF) to advocate on a national scale.

The ACEF was a key founding organisation of the Australian Chamber of Commerce and Industry (ACCI), which today is one of the peak bodies representing Australian business interests to government, the community and internationally.