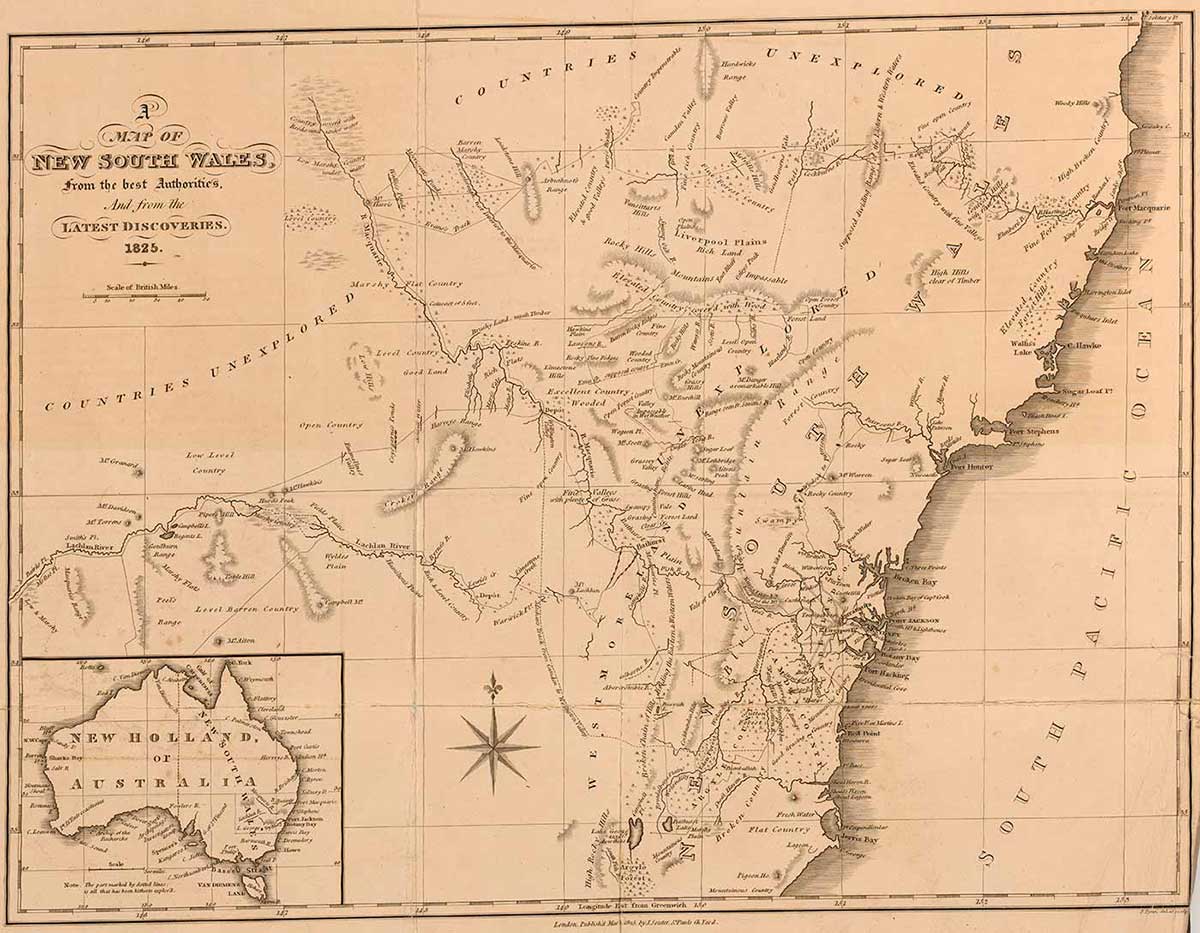 The Robertson Land Acts, passed in New South Wales in 1861, provided for the legal purchase and occupation of Crown lands.

Before their introduction much of the land beyond the 19 established New South Wales districts was occupied illegally by ‘squatters’.

The Acts were intended to combat this and allow for the colony’s expansion.

These two acts held the aspirations of a generation. They promised to put the small man, the ‘poor man’, on the land. They promised to break up the big squatting runs and parcel the land into small freehold farms. The grail of wholesome farming seemed to be in reach.

The land that we now know as Australia was claimed by Britain on the assumption that the continent could be considered unoccupied.

The British used the legal principle of terra nullius (land belonging to no one) to justify occupation of the continent, as proclaimed by Lieutenant James Cook in 1770.

New South Wales, the first British colony on the Australian continent, was proclaimed by Captain Arthur Phillip, its first governor, in 1788.

Phillip’s official instructions, issued in 1787, had given him the power to grant and dispose of lands administered under the British Crown.

Land grants were verified by a document that carried the seal of the colony and was officially recorded by an officer that the governor would appoint. The surveyor-general’s office was established by Phillip to administer Crown lands.

From 1791 Governor Phillip distributed free grants of land on behalf of the Crown to encourage settlement in the colony. Between 1810 and 1821 Governor Lachlan Macquarie, the colony’s fifth governor, instituted the leasing of Crown land.

Further reform came in 1825 when a system of selling land was introduced which led to the elimination of free grants for Crown land in 1831. From then on, land was sold only at public auction. Furthermore, the governor’s discretionary power to refuse applications for land ownership was removed.

There was much dissatisfaction with the model of Crown land management being applied in the colony.

They took their name from Premier John Robertson, land reformer and politician, who introduced them in 1861.

The Alienation Act provided for the sale of town and suburban land by public auction.

The Occupation Act allowed for the leasing of Crown land. It permitted any person in the colony to select up to 320 acres (130 hectares) of non-urban land and purchase the freehold at a rate of £1 per acre.

Before the passage of these Acts, a group of people known as ‘squatters’ had informally acquired vast tracts of so-called unoccupied land outside the original 19 counties of New South Wales. As a result, they became quite powerful and enjoyed high social standing.

The squatters grazed livestock on a large scale, and occupied large areas of Crown land even though they had no legal right to it. They gained the use of it simply by being the first settlers in these areas. Robertson intended that the Acts would also make it easier for working-class citizens to purchase and own land.

The two Acts made free selection of Crown land possible for anyone. They disrupted the squatters’ monopoly of land by allowing a new group of small landowners – who came to be known as ‘selectors’ – to purchase and own Crown land from the colonial government. 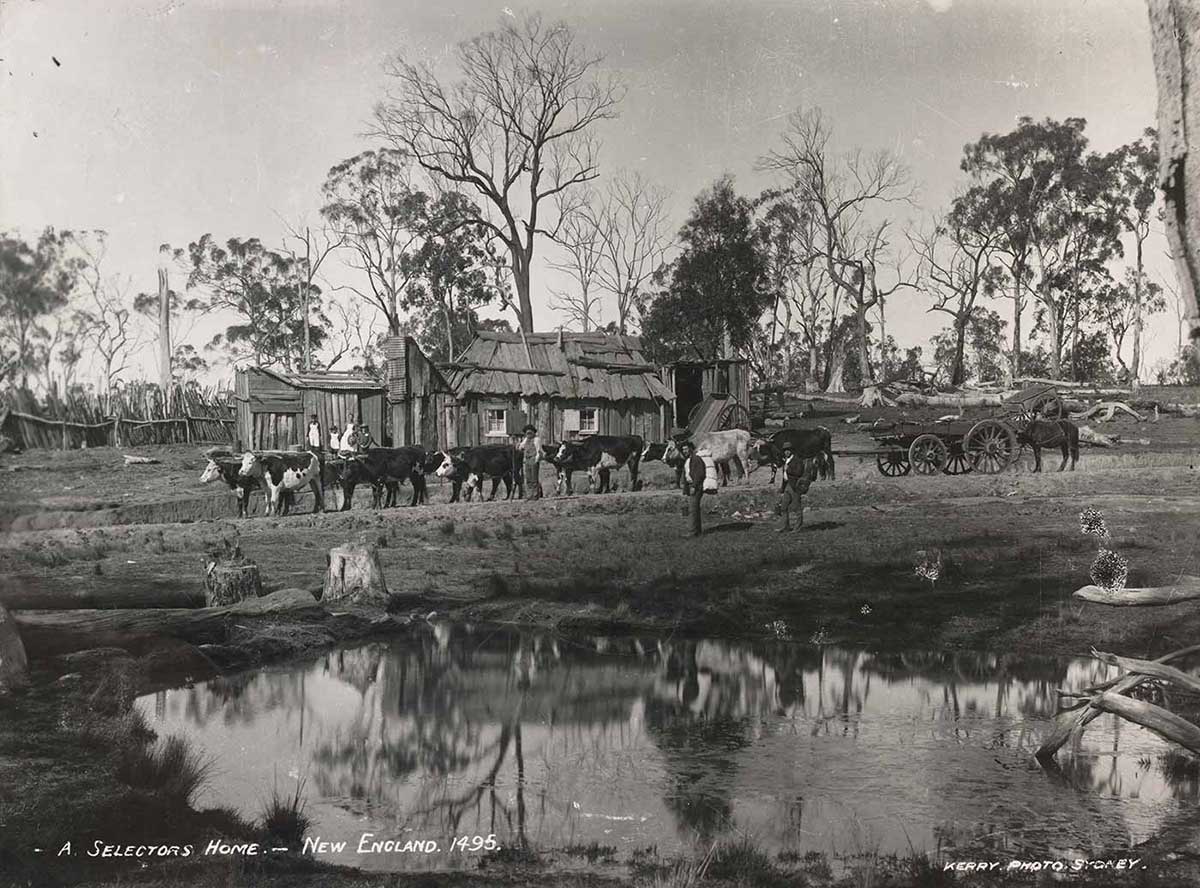 A selector’s home in New England

Adverse effects of the Acts

The land acts caused disagreement between squatters, who believed the land was rightfully theirs, and selectors, who undertook the new legal processes of purchasing lands set out by the Robertson Land Acts.

Many squatters who had established farms and become wealthy felt that the Robertson Acts threatened their livelihoods.

The Acts increased the sale of Crown lands that had been acquired under the principle of terra nullius. As a result, they accelerated the dispossession of Aboriginal people from their traditional lands.

After more than two decades of Crown land management under the Robertson Land Acts, the Crown Lands Act 1884 was passed.

The Act led to the decentralisation of land management in New South Wales through a division of land into eastern, central and western divisions. Each division had a local land board to administer leases and permits.

The sheer geographical size of the colony led, in part, to the passage of the Western Lands Act 1901, which established a system of land management for the western division of the New South Wales. It was kept in place until the introduction of the Crown Land Management Act 2016.

The Crown Lands Consolidation Act 1913 was introduced to amalgamate all relevant legislation in order to deal more efficiently with the sale, occupation and management of Crown land. It was eventually replaced by the Crown Lands Act 1989 in order to administer Crown land in the eastern and central divisions of the state.

The Crown Land Management Act 2016, currently in operation in New South Wales, addressed the need for community consultation and a simplified system of land tenure. It also merged the management of Crown land in all state land divisions.

Historians and commentators differ over how successful the Acts were.

However, taken together, they had a significant impact on land ownership. This is evident from the fact that selection (the legal purchase of Crown land) – as opposed to squatting (illegal occupation) – increased after the Acts were abolished. This development helped the colony to expand beyond established urban areas.

The selector's hutPostcard featuring a painting by J. Hutchings, titled "Australian Series, / 'THE SELECTOR'S HUT'.". There is a message on the back.