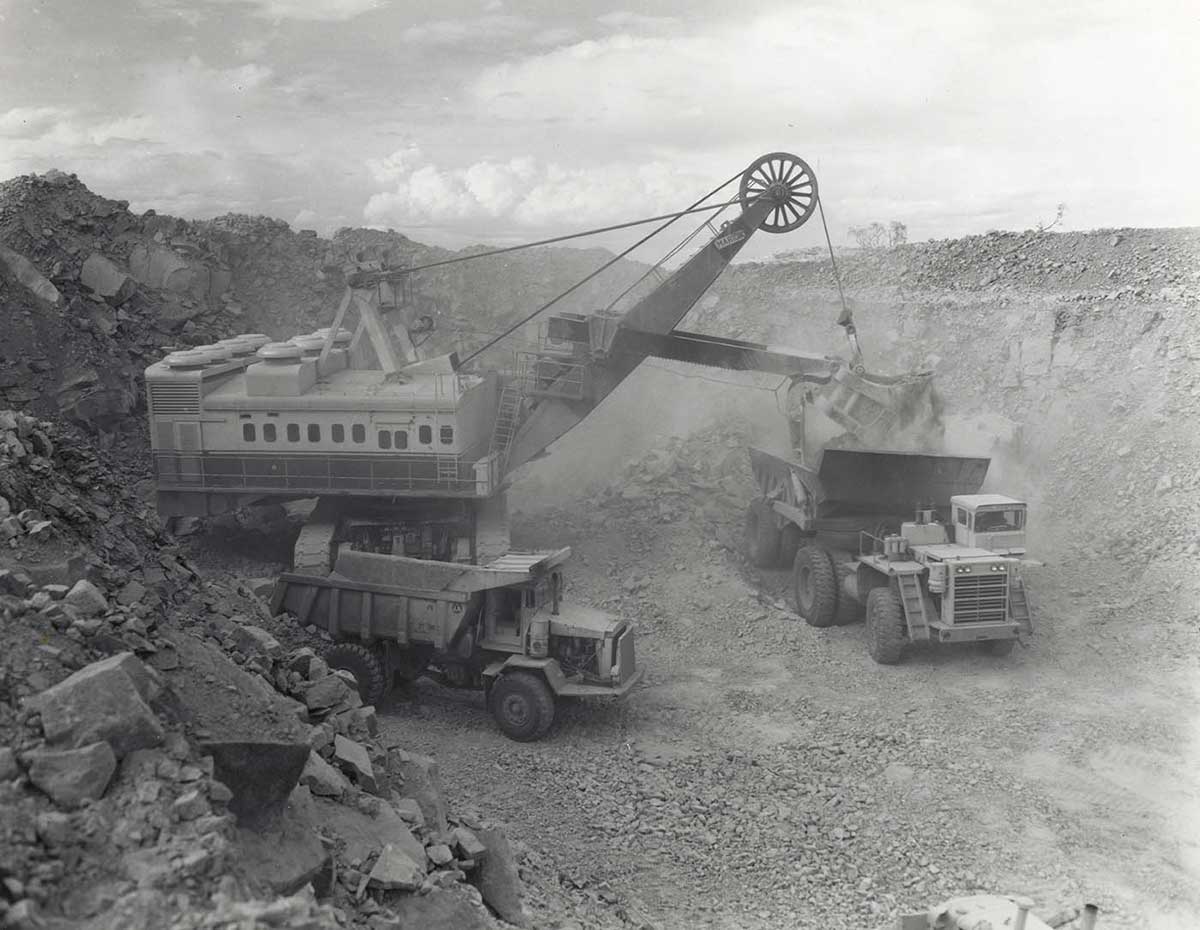 A giant power shovel and 95-ton trucks working on the Hamersley railway, May 1966

On 24 November 1960 the federal government agreed to the partial lifting of an iron ore export ban that had been in place in Australia since 1938.

Large deposits of iron ore were being discovered in the Pilbara region of Western Australia and with Japanese demand for raw materials increasing rapidly the industry took off.

In November of 1952 I was flying south with my wife Hope … On going through a gorge in the Turner River, I noticed that the walls looked to me to be solid iron and was particularly alerted by the rusty looking colour of it, it showed to me to be oxidized iron. 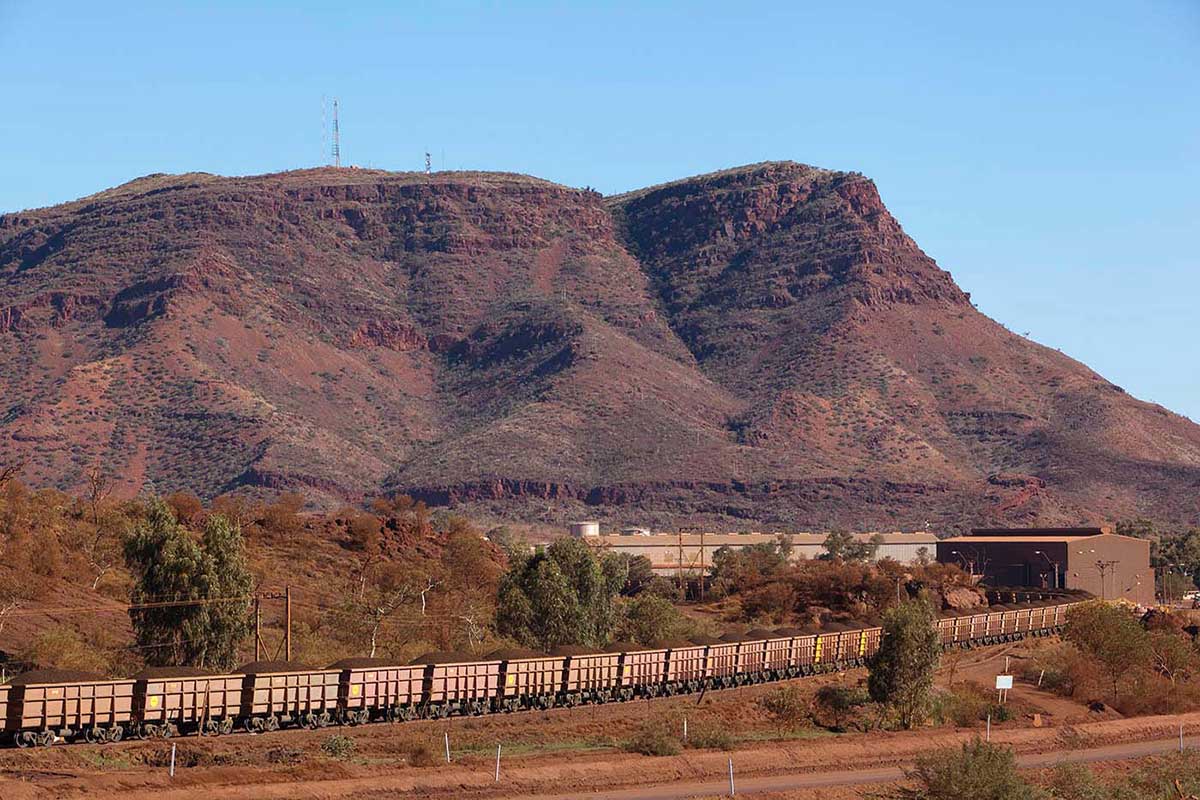 Iron ore was first mined in Australia at Iron Knob, South Australia, by the Broken Hill Proprietary Company (BHP) in the late 1890s to be used as flux in its Port Pirie lead smelters.

The ore turned out to be of such high quality (close to 60 per cent purity) that BHP decided to create its own steel manufacturing plants, first at Newcastle and then Port Kembla.

In the same year, an agreement was reached between the Nippon Mining Company and the British firm HA Brassert to establish a mine on Koolan Island in Yampi Sound, Western Australia. Brassert planned to ship one million tons of ore per year to Japan.

However, Japan’s full-scale invasion of China in 1937 instilled a fear among the Australian public that it was only a matter of time before a larger scale Pacific war would begin. As a result, the federal government instigated a major examination of Australia’s iron ore reserves.

On 18 April 1938 Joseph Lyons’s government announced a ban on the export of all iron ore. This decision was reinforced a month later when the Commonwealth geological adviser, WG Woolnough, counselled that, with iron ore reserves down to 264 million tons, the country could become an ore importer within 25 years if it did not conserve stocks.

The export ban was a major disincentive to iron ore exploration over the next 20 years, but geologists knew there were significant ore deposits in Western Australia and the state Labor government began assessing these finds in the 1950s.

In the last years of the decade, companies such as Western Mining Corporation and Rio Tinto Mining Australia began to lobby the federal government to end the ban.

In 1959 the recently elected Liberal Premier of Western Australia, David Brand, visited Canberra to discuss the embargo with William Spooner, the Minister of National Development.

Spooner was in favour of cautious modification, but Prime Minister Robert Menzies and Minister for Trade and Industry, John McEwen, were against any changes.

In 1960–61 Australia’s trade deficit increased dramatically to £157 million and Menzies tasked his cabinet with finding exports that could balance the shortfall.

Commodity prices across Asia had risen through the 1950s as countries, including Japan, rebuilt and industrialised.

By 1953 Japanese production levels had returned to prewar rates and the economy was growing at 9 per cent per year. Japan was an American ally in the Cold War and was in need of a secure supply of raw materials, including iron ore.

At the same time, technological developments in railways and shipping were making the movement of vast quantities of ore more economical.

The Menzies government was still unwilling to lift the export restrictions. Menzies and McEwen had both been involved in the 1938 ban and were reluctant to backflip on their decision. The Western Australian Government was insistent that it wanted some form of trade liberalisation.

Eventually, on 24 November 1960, a concession was reached: the federal cabinet agreed the ban would continue for high-grade deposits but exports of up to one million tons annually would be permitted from smaller, or as yet unknown, deposits. However, it kept the option of reversing the decision as it saw fit.

On 1 December 1960 an export licence was granted to Mineral Mining Exports (WA) Pty Ltd for 500 tons of iron ore.

In early 1961 Lang Hancock, amateur geologist and owner of the Ashburton and Mulga Downs stations in the Pilbara region of Western Australia, informed Conzinc Rio Tinto (a merger of the Australian company Consolidated Zinc and the British Company Rio Tinto) of his discovery of vast deposits of high quality ore in the Turner River area.

This led to a rush by companies to gain leases in the Pilbara and secure contracts with Japanese steel mills.

In 1965 the Menzies government announced its decision to remove the ban on the export of iron ore from Yampi Bay, justifying its decision on the grounds that a series of companies were now in the midst of attaining agreements with Japanese businesses. By this time, more than £800 million of contracts had already been negotiated.

Finally, on 17 May 1966, the federal government confirmed it was rescinding all remaining Commonwealth iron ore embargoes.

In 2013 Australia exported 300 million tons of iron ore worth $30 billion. Iron ore is an intrinsic component of the national economy and has played a key role in transforming the Western Australian economy.

Iron Ore Mining as a Source of Ochre Pigments by John Wolseley, 1995A mixed media drawing depicting a mining scene and landscape, on paper and a white canvas mail bag. The canvas bag is cut open and flattened into a rectangular shape, and has metal eyelets and cotton cord along the top edge. A rectangular white sheet of paper is layered over the upper right hand side of the canvas, and smaller s...