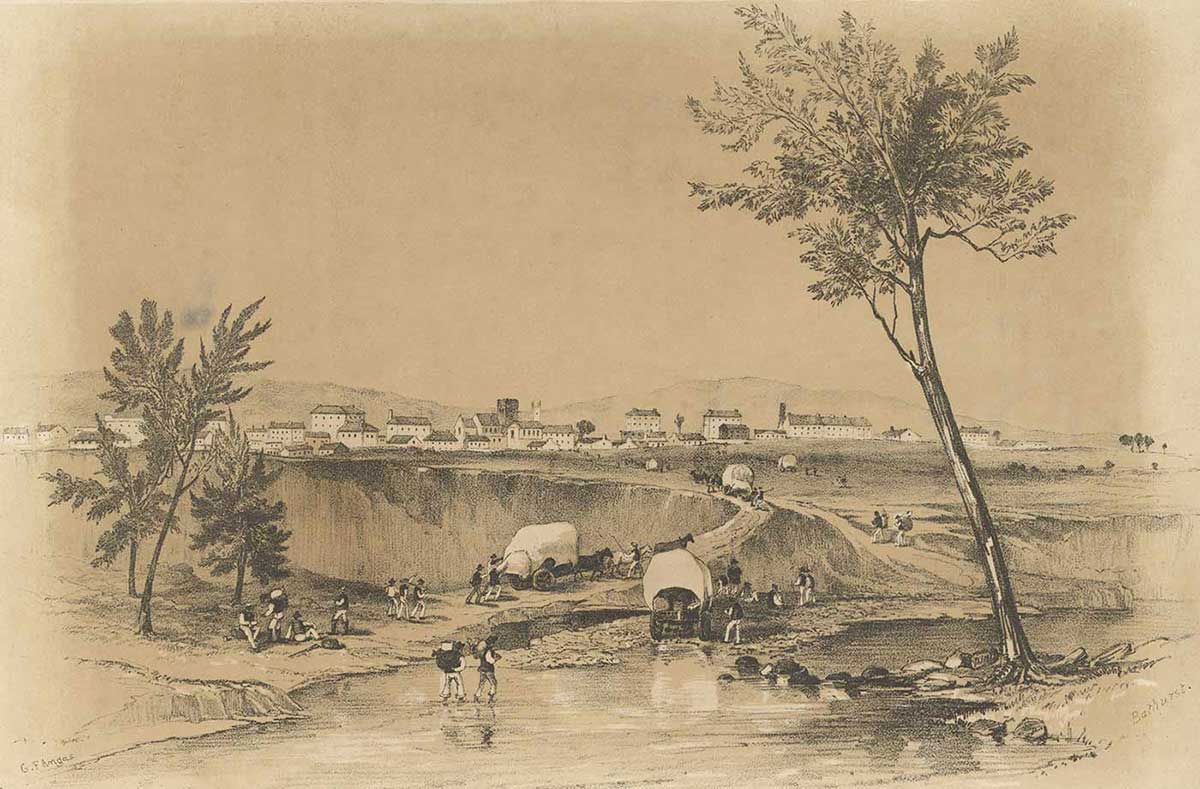 The establishment of the inland town of Bathurst was one of Governor Lachlan Macquarie’s many achievements and marked the beginning of the spread of European settlement west of the Blue Mountains. However, it came at a tremendous cost to the local Aboriginal population.

Governor Macquarie on his first view of the Bathurst Plains, 1815:

It is impossible to behold this grand scene without a feeling of admiration and surprise, whilst the silence and solitude, which reign in a space of such extent and beauty as seems designed by nature for the occupancy and comfort of man, create a degree of melancholy in the mind which may be more easily imagined than described.

From his assumption of office as Governor of New South Wales on 1 January 1810, Lachlan Macquarie sought to increase the colony’s capacity to produce its own food, instructing settlers to grow grain rather than raise sheep and cattle.

However, many large landholders refused to comply and continued to build their stock numbers.

When drought struck the Sydney coastal region, to which the colony was confined by the Blue Mountains, the landholders grew desperate for new pastures.

Then several expeditions, including those led by Francis Barrallier and George Caley, managed to penetrate part way into the mountains, travelling up the Burragorang Valley, inland from Richmond, and around the range to the south.

In 1813 William Charles Wentworth, William Lawson and Gregory Blaxland, keen to expand their landholdings, persuaded Macquarie to support their attempt to cross the Blue Mountains. They departed Emu Plains with horses, an Aboriginal guide and three convict servants.

Twenty-one days and about 93 kilometres later they climbed what is now Mount Blaxland and saw to the west country suited to sheep and cattle. They had proved to their fellow Europeans that the Blue Mountains should be crossed.

Building a road across the range

After Blaxland, Lawson and Wentworth returned with reports of promising land beyond the mountains, Macquarie instructed surveyor George Evans to determine the most suitable route for a road across the range.

Evans traced the explorers’ trail of blazed (marked) trees and descended, following a pathway made by local Aboriginal people, onto the inland slopes. He found rich grasslands, mostly created by the Wiradjuri people’s practice of periodic burning.

Macquarie then commissioned former soldier William Cox to build a twelve-foot-wide road from the existing road terminus near Emu Plains through the mountains and on to the newly named Macquarie River. In only six months, Cox’s team of 30 convicts and eight guards completed more than 160 kilometres of road and a dozen bridges.

For his efforts, Cox received the first land grant west of the mountains – 2000 acres (809 hectares) on the Macquarie River. 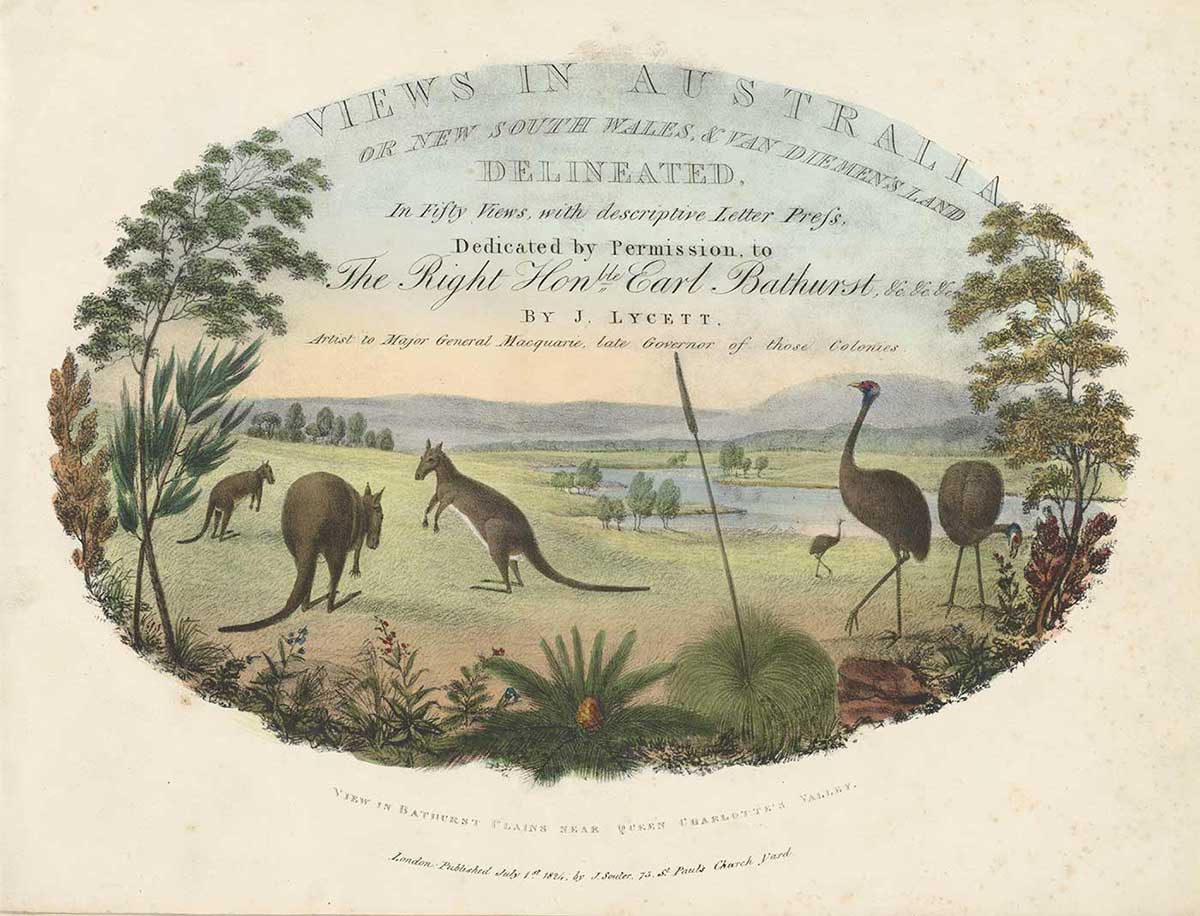 On 25 April 1815 Macquarie left Sydney on an expedition to inspect the road and view the inland pastures, with a party of more than 50 people.

The Governor and Mrs Macquarie travelled by carriage and arrived on their namesake river 10 days later. There they camped for a week and chose a suitable site for a town they named Bathurst, after the Secretary of State for War and the Colonies, Lord Bathurst.

Macquarie wrote of the place:

The situation of Bathurst is elevated sufficiently beyond the reach of any floods which may occur, and it is at the same time so near to the river on its south bank, as to derive all the advantages of its clear and beautiful stream. The mechanics and settlers, of whatever description, who may be hereafter permitted to form permanent residences to themselves at this place, will have the highly important advantages of a rich and fertile soil, with a beautiful river flowing through it.

Bathurst was initially planned as an administrative centre for government officials, soldiers and convicts stationed on the plains west of the Blue Mountains, and as a service centre for the colony’s growing pastoral enterprises.

However, as news of the quality of the land spread in Sydney, pastoralists flooded inland and for the next decade a state of armed conflict existed in the region as the Wiradjuri people, led by the warrior Windradyne, resisted the loss of their lands to the settlers.

The steady growth of the town was given a tremendous boost in the 1850s when gold was discovered 20 kilometres away at Ophir. The discovery began the Australian gold rushes and Bathurst prospered in the following decades.

Today it is still one of the most important inland cities in New South Wales, famous for motor racing, agriculture and as the birthplace of one of Australia’s greatest prime ministers Ben Chifley.

Dirk, scabbard, by-knife and fork used by New South Wales Colonial Governor Lachlan MacquarieA dirk consisting of a large metal blade one edge of which is notched in a decorative manner. It has a carved black wooden hilt studded with silver nails, and a silver cap at the pommel. The dirk is housed within a leather scabbard which has silver mounts. Fitted into two of the mounts is a small metal by-knife and fork, both wi...

Theo Barker, A Pictorial History of Bathurst, Robert Brown and Assoc. in association with the Bathurst Historical Society, Bathurst, 1985.