Moreton Bay Penal Settlement was established as a place of exile and punishment for re-offending convicts.

The first Europeans to discover the Brisbane River and select the site for the town of Brisbane is credited to several people, including three ex-convicts.

... [we were] amply gratified in the discovery of this important River, as we sanguinely anticipated the most beneficial consequences as likely to result to the colony by the formation of a settlement on its banks.

In 1817 Earl Bathurst, Colonial Secretary in Lord Liverpool’s conservative British Government, wrote to Viscount Sidmouth, Home Secretary, stating his concern that transportation to New South Wales, was no longer an effective deterrent to the ‘criminal class’.

Word had travelled of the successes of some former convicts in the new land, especially during Governor Lachlan Macquarie’s term in office from 1810–21.

Bathurst began to suspect that transportation was no longer seen as a punishment short of hanging, as was originally intended, but an option that held some appeal.

In 1819 Bathurst commissioned John Thomas Bigge to report on, among other matters, how transportation to New South Wales could be made more effective as a deterrent.

… transportation to New South Wales is intended as a severe punishment applied to the various crimes, and as such must be rendered an object of real terror to all classes of the community.

Bigge’s reports, published between 1822 and 1823, made a large number of detailed recommendations to restore ‘terror’ to transportation, including plans to establish new penal settlements where recidivist convicts would be subjected to the harshest treatment.

The remoteness of the bay – from Sydney and other European communities – made it ideal as a place of exile for the ‘worst’ convicts.

James Cook had sailed past Moreton Bay in 1770, naming the bay in tribute to a past president of the Royal Society, the Earl of Morton. [1]

In 1799 Matthew Flinders spent 15 days navigating the bay, including landing at a site he called Red Cliff Point (today’s Redcliffe).

Neither explorer discovered the large river that emptied into the bay.

In March 1823 Thomas Pamphlet, John Finnegan, Richard Parsons and John Thompson were cast adrift after their boat was blown out to sea off Sydney.

John Thompson died before the boat landed. The other survivors – believing they had landed south of Jervis Bay – made plans to walk north to Sydney. In fact, their boat had landed at Moreton Island.

The Indigenous people of Moreton Bay provided the castaways with food and water. When the men had recovered their health, they gave them directions, and possibly canoes, to enable them to continue their journey on the mainland.

In mid-June the men came across a wide river which they followed upstream for several kilometres. This was the first European encounter with the Brisbane River.

On 29 November 1823 Oxley, who was just beginning his Moreton Bay survey in HMS Mermaid, found Pamphlet and Finnegan on the beach at Point Skirmish, Bribie Island while Parsons was away hunting. 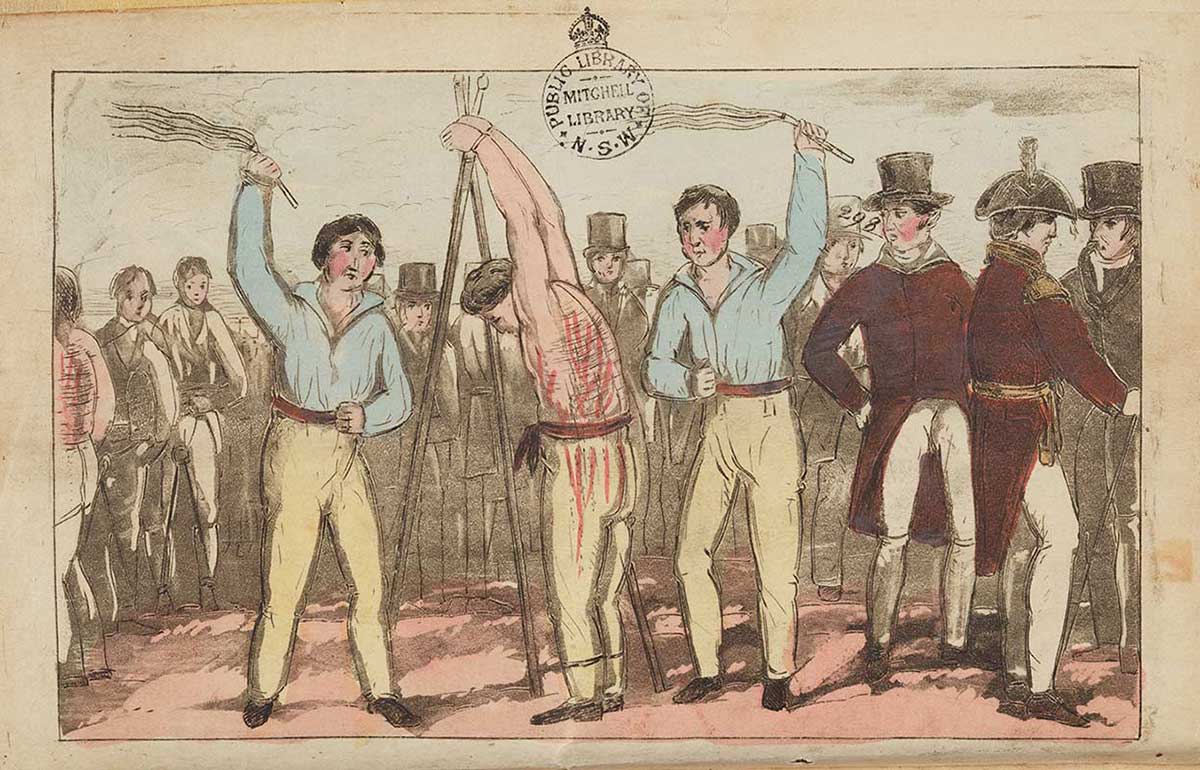 Flogging a Convict at Moreton Bay by William Ross, illustration from The Fell Tyrant

After hearing the castaways’ account of travelling along a large river, Oxley’s party set out on 1 December to investigate, taking Finnegan as a guide. Over the next four days they located the mouth of the river, which Oxley named after the Governor of New South Wales, and rowed about 80 kilometres upstream.

Oxley returned to Sydney on 6 December to report that Redcliffe Point was a suitable site to start a penal settlement.

On 12 September 1824 the Amity arrived at Redcliffe. Among the 54 people on board were Oxley, Lieutenant Henry Miller of the 40th Regiment of Foot, the first commandant of the Moreton Bay Penal Settlement, botanist Allan Cunningham, guards and about 30 convicts.

Within a few months it became clear that Redcliffe Point's environment was not suitable for a permanent settlement, and so a decision was made to relocate to the banks of the Brisbane River.

Choosing the site for Brisbane Town

As Surveyor-General, Oxley was responsible for finding a settlement location and on his surveys of the Brisbane River, he had favoured two sites: near present-day Breakfast Creek and Milton.

However, no moves were made to establish a settlement at either site.

Sometime in May 1825, Commandant Miller and pilot John Gray took it upon themselves to select the site for Brisbane Town.

They found a suitable location a few bends up the river from Breakfast Creek. There is no written evidence indicating why Miller made this decision or even the precise date that Brisbane Town was founded.

By 1826 the settlement had about 200 convicts, but Brisbane was little more than an encampment of rough slab and timber dwellings.

The third commandant, Captain Patrick Logan, who took up his position in March 1826 (replacing Captain Peter Bishop, who had a brief but ineffective term after Miller), began a program of public works, replacing temporary structures with stone buildings.

Around 1828 a windmill at Spring Hill was built to grind corn and wheat into flour. The windmill had two sets of millstones: one powered by wind sails, the other driven by a treadmill which served the additional purpose of punishing convicts, something that Logan notoriously pursued with exceptional brutality.

They were required to labour from dawn until sunset, and misbehaviour was punished by being fettered with leg irons, receiving up to 150 lashes or enduring time on the treadmill. It was common for convicts in leg irons to work the treadmill in shifts of up to 14 hours.

In 1827 Allan Cunningham became the first European to discover the fertile country of the Darling Downs, west of Brisbane. Despite colonists’ desire for new land, some 13 years passed before the first squatter occupied a run on the Downs.

Moreton Bay Penal Settlement acted as a brake on European development because no one was allowed within 80 kilometres of Brisbane without special permission. As a result, farmers faced problems selling their produce in Brisbane, or purchasing supplies.

From the 1830s, would-be landowners, entrepreneurs and merchants from the south of Australia asked the colonial government to open all of Moreton Bay to free settlers.

The government did not need much convincing. The cost of maintaining and guarding the penal settlement had already prompted it to recommend abolishing the convict colony, first in 1832 and again in 1835.

Convict numbers were reduced from 1837, and in 1839 the government appointed a surveyor to map the area around Moreton Bay, in preparation for free settlement.

On 10 February 1842 the Moreton Bay Penal Settlement was formally abolished. Queensland, with Brisbane as its capital, became a separate colony in 1859.

[1] The spelling discrepancy derives from an error in the published account of Cook’s Endeavour voyage.