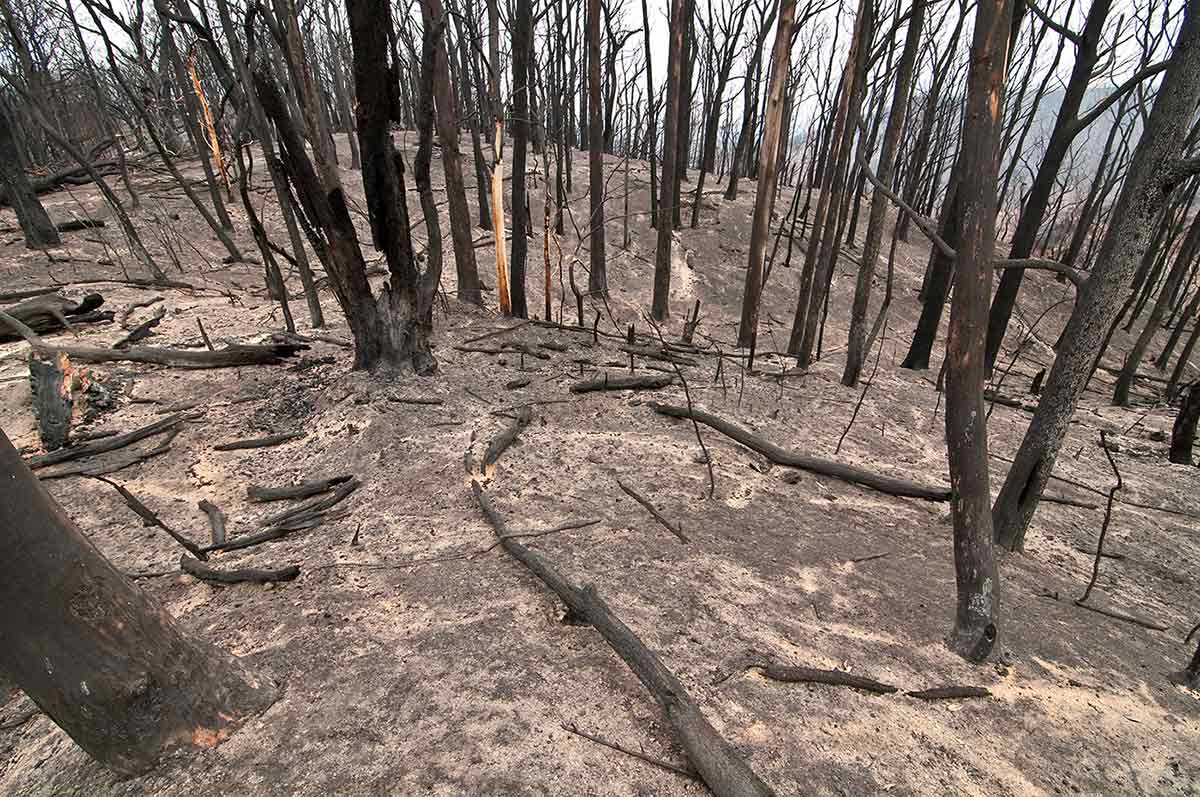 The 2009 Black Saturday bushfires in Victoria caused widespread devastation and the greatest loss of life from fire since colonisation.

One hundred and seventy-three people tragically lost their lives, 414 were injured, more than a million wild and domesticated animals were lost and 450,000 hectares of land were burned.

Fire has been a part of the Australian environment for as long as the continent has existed, but over the past 200 years bushfires have become increasingly lethal and costly.

A tragedy beyond belief, beyond precedent and beyond words … one of the darkest days in Australia’s peacetime history.

Fire has been an elemental part of the Australian environment for as long as the continent has existed. Much of the vegetation in Australia has evolved to survive, thrive in and even promote frequent exposure to fire. The seeds of many native species require smoke or intense heat to germinate.

Aboriginal people have used fire as a complex land-management tool for tens of thousands of years. Across country they adapt the heat and intensity of fire to individual environments to burn off grass and bush, to keep trails clear, promote new growth that will attract kangaroos and other prey, and to drive animals towards waiting hunters.

Over many millennia, these controlled burns have altered the continent’s environment, favouring the survival and spread of fire-resistant plant species and creating open grassy woodlands. Frequent burning reduced the fuel load of dead leaves, branches and grass, and lessened each fire’s intensity.

From 1788 those fire practices began to change. European settlers, who were afraid of bushfires, brought their own ways of using fire.

At first they used fire to clear land but as they put up fences and buildings, raised crops and increased their herds, uncontrolled burning became a threat to life and property.

The first bushfires in the colony were reported in 1797. As Aboriginal people were driven off their land, their regime of low-intensity fire management went with them, and bushfires became more prevalent. From then, the government sought to limit Aboriginal and settler use of fire as an agricultural tool.

To remedy so alarming an evil it will be proper to oblige all persons holding farms adjoining waste and uncultivated land to keep plowed up so much … as shall be adjudged sufficient to stop the progress of the fire.

As Australia became more urbanised, the fringes of cities encroached farther into the bush and it is here in the frontier zone between bush and city that bushfires do much of their damage. Devastating, large-scale fires have increased in size and frequency over the past 230 years.

It was in this edge environment that the Black Saturday bushfires inflicted the damage that made them some of the most destructive in Australian history.

A heatwave struck south-eastern Australia in the weeks before 7 February 2009, building on two months of hot, dry conditions.

Melbourne endured three days above 43 degrees and the temperature peaked on 30 January 2009 at 45.1 degrees, one of the hottest days ever recorded in the city. These temperatures combined with extremely low levels of humidity to create tinder-dry conditions in the Victorian bush.

On 6 February 2009 Premier John Brumby issued a public warning that the next day was expected to be the ‘worst day [for fire conditions] in the history of the state’.

On the morning of 7 February 2009 north westerly winds in excess of 100 kilometres per hour scoured the state, bringing hot, dry air from Central Australia. The storm helped create almost perfect fire conditions and when the winds brought down powerlines at 11.47am in Kilmore East, the resulting sparks ignited the fire.

The Kilmore East fire spread quickly and crossed the Hume Freeway at 1.58pm. It burnt through Wandong and arrived at Mount Disappointment at 3pm. The fire was then blown towards Humevale and Kinglake.

The Murrindindi fire began at 3pm and spread through the Murrindindi State Forest and Black Range. It reached Narbethong at 4.20pm and Marysville at 6.45pm before burning through Buxton and Taggerty.

The Kinglake Fire Complex was the most significant fire which evolved from the merging of the Kilmore East and Murrindindi fires on 8 February 2009. It swept through state forests and national parks with flames recorded at 30 metres in height.

The weeks after Black Saturday

The following day, 8 February 2009, the Kilmore East fire and the Murrindindi Mill fire around Marysville merged to create the massive Kinglake fire complex. Hot, dry conditions continued and despite the concerted efforts of more than 19,000 Country Fire Authority members, the fires continued to blaze.

It would take weeks before weather changes, reduction of fuel loads and human intervention extinguished the fires. 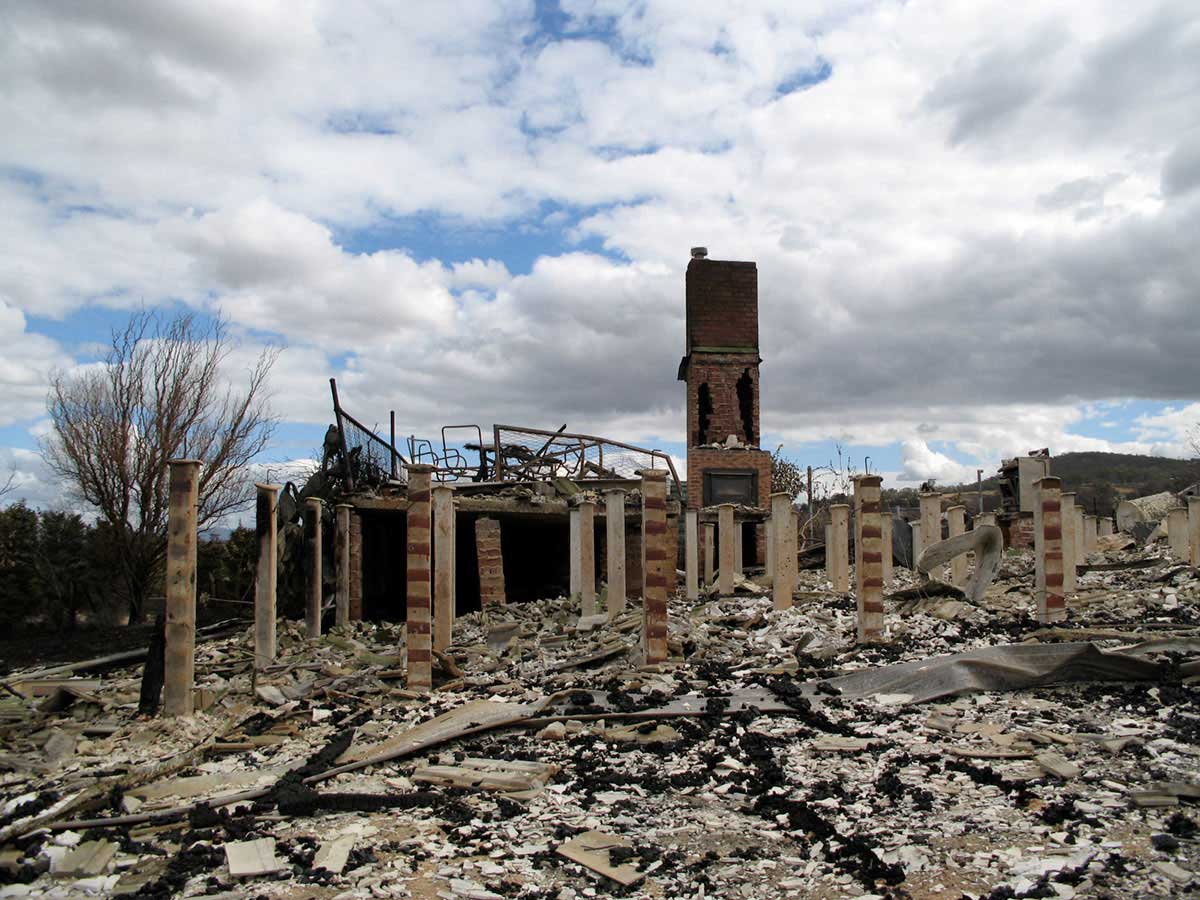 Bushfire damage to a property north of Yarra Glen

The Black Saturday bushfires killed 173 people, 120 in the Kinglake area alone. Another 414 people were injured. More than 450,000 hectares had burned and 3,500 buildings including more than 2,000 houses destroyed. The RSPCA estimated that up to one million wild and domesticated animals died in the disaster.

The impact of the bushfires was so overwhelming that Premier Brumby announced a royal commission into the fires on 13 February 2009, even before the full extent of the disaster was known.

The commission investigated ‘all aspects of the government’s bushfire strategy’ and included among its 67 recommendations that the Victorian Government revise its advice around preparation for bushfires along with its bushfire education policies, and that it modify building codes, including banning the construction of homes in high-risk areas.

The lasting damage of the Black Saturday bushfires has been the personal cost to individuals, families and communities.

Loss of life and injury to family and friends, loss of homes and the memories they contained, the complete alteration of familiar landscapes and the sense of foreboding that such a disaster could happen again have affected people across the fire-ravaged region.

Doctors and psychologists have reported a rise in suicides among bushfire survivors, along with alcohol and drug abuse and addictive behaviour such as gambling.

Defining Moments in Australian History 23 May 2019

Group of four fused coins from Kilmore East bushfire, Victoria, 7 February 2009An uneven pile of four Australian coins fused together. The coin on top of the pile has a cavity that takes up about a quarter of the surface and is blue and green. The opposite side of the pile has a bright green discolouring. There is ash covering most of the coin surfaces.