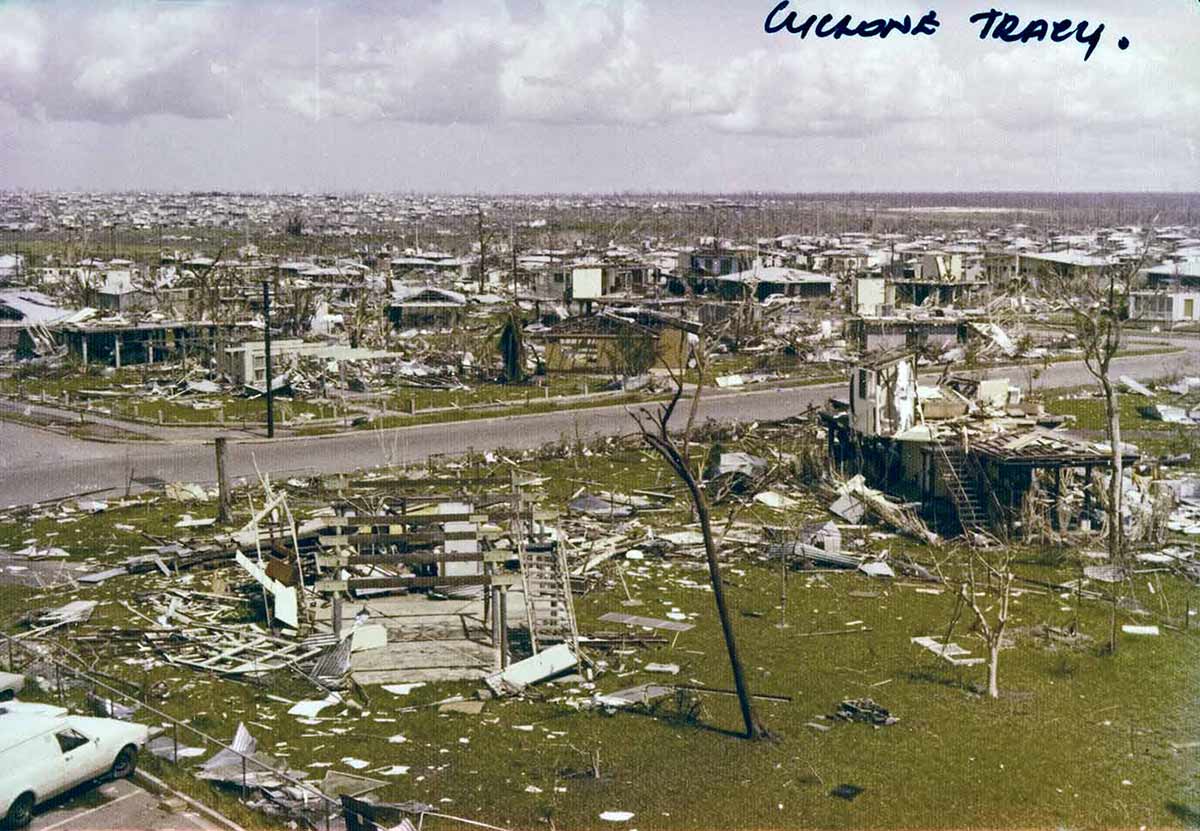 Cyclone Tracy, which hit Darwin in the small hours of Christmas Day 1974, killed 71 people and devastated 80 per cent of the city.

In the days and weeks following the disaster, most of the traumatised population left the city.

On 28 February 1975 the Whitlam government established the Darwin Reconstruction Commission, which effectively rebuilt the city within three years. Darwin’s near complete destruction led to the introduction of improved building codes across Australia.

Joan Allridge, Vice President of the Red Cross in Darwin:

The house fell down around us. It was terrifying, the wind roaring and the house smashing. We were freezing cold. The water pouring in on us was icy. And all I had on was a nightie. 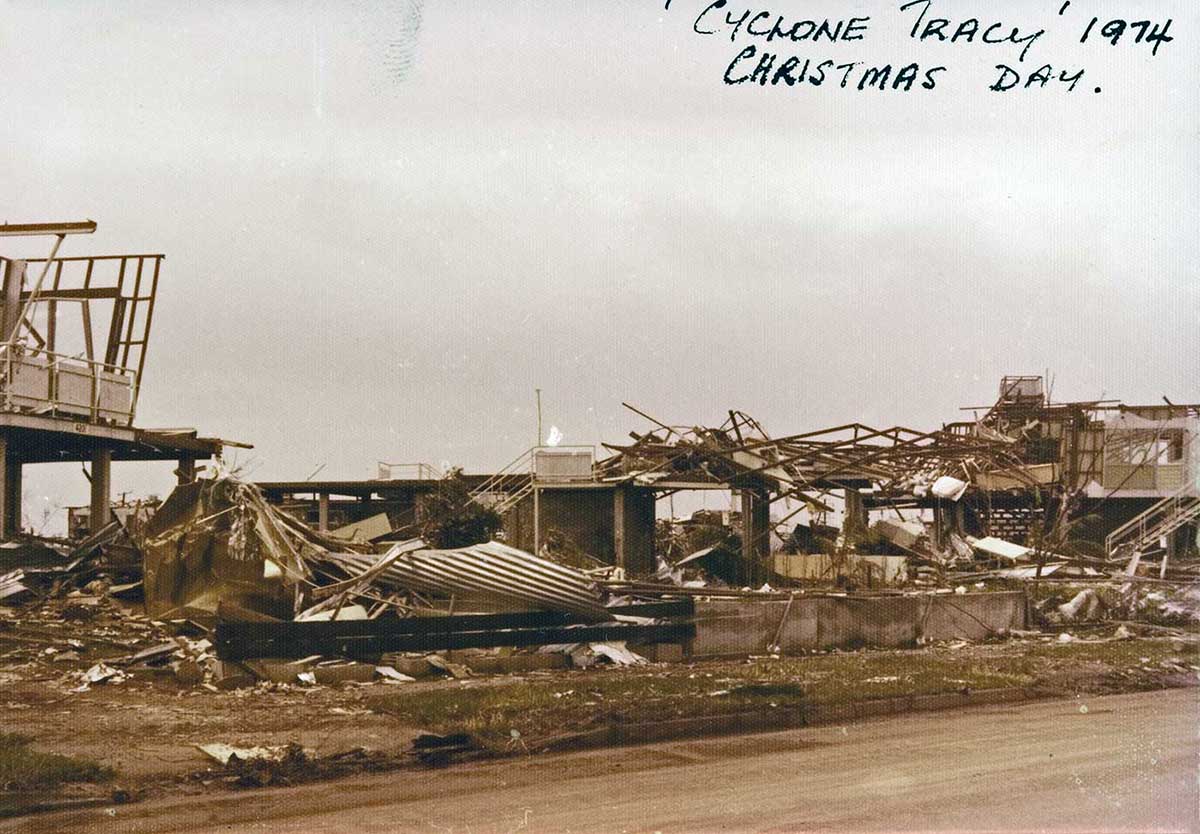 Remains of the Gwynne family home in Wagaman, Darwin

Darwin, indeed the whole of Northern Australia, is no stranger to cyclones. However, Cyclone Tracy, which hit Darwin in the small hours of Christmas Day 1974, was among the most destructive ever recorded in Australia. Its vital statistics make for frightening reading:

The cyclone crossed the coast near Fannie Bay at around 3.30 on Christmas morning. Had it struck during the daytime, the death toll could have been much higher. Most of those who lost their lives were killed by flying debris or crushed beneath their houses.

In the immediate aftermath of the cyclone, evacuation of the majority of the population was considered essential given there was no running water, no sanitation, no electricity, little shelter and a high risk of disease outbreaks. More than 36,000 people left Darwin, filling the planes that had arrived with supplies, equipment and specialised personnel.

News of the disaster took hours to reach the rest of the country. The song ‘Santa never made it into Darwin’ captured the poignancy of the cyclone’s arrival on Christmas Day, as most Australians were preparing to celebrate the most significant religious holiday of the year with their families. People donated clothes and money, and opened their homes to Darwin’s refugees.

Voluntary organisations swung into gear, many sending in teams as soon as news of the disaster broke. Joan Allridge, Vice President of the Red Cross who spent the hours of the cyclone under her kitchen table with two other adults, six children, one cat, four kittens, one dog and three birds recalled how essential those early fly-in support workers were.

Most of Darwin’s population, herself included, emerged from the cyclone in a state of shock. These days there is a much more sophisticated understanding of the psychological impact of being involved in major disasters, both for those who live through them and for the staff or volunteers who go in afterwards.

On 28 February 1975 the Whitlam government established the Darwin Reconstruction Commission, following the Prime Minister's pledge to make 'a determined and unremitting effort to rebuild your city and relieve suffering'.

The Commission's mandate was to reconstruct Darwin within five years. In fact, it achieved this in a little more than three years. It was only then, in the middle of 1978, that Darwin’s population reached its pre-cyclone levels.

In time, some good would come out of the experience of Cyclone Tracy. The main benefit was the introduction of greatly improved building standards that would apply across the entire country. These included requirements that buildings be clad to protect them against flying debris, and that their roofs be tied to the foundations.

When Cyclones Larry and Yasi both stronger than Tracy – hit Innisfail and Mission Beach on 20 March 2006 and 3 February 2011 respectively, there were no casualties.

The events of 1974 remain indelibly marked in Australia’s cultural memory. The cyclone’s timing and ferocity, the mass evacuations of distressed and injured residents, and the terrible images of destruction shocked many, and reminded them of their human frailty.

The extraordinary official response and public generosity reminds us of our social resilience, of how terrible things can happen, and how we can help each other through them.

Audio from an ABC journalist in Darwin giving a firsthand account, Australian Screen