1942: Japanese bomb Darwin but are halted on Kokoda Trail 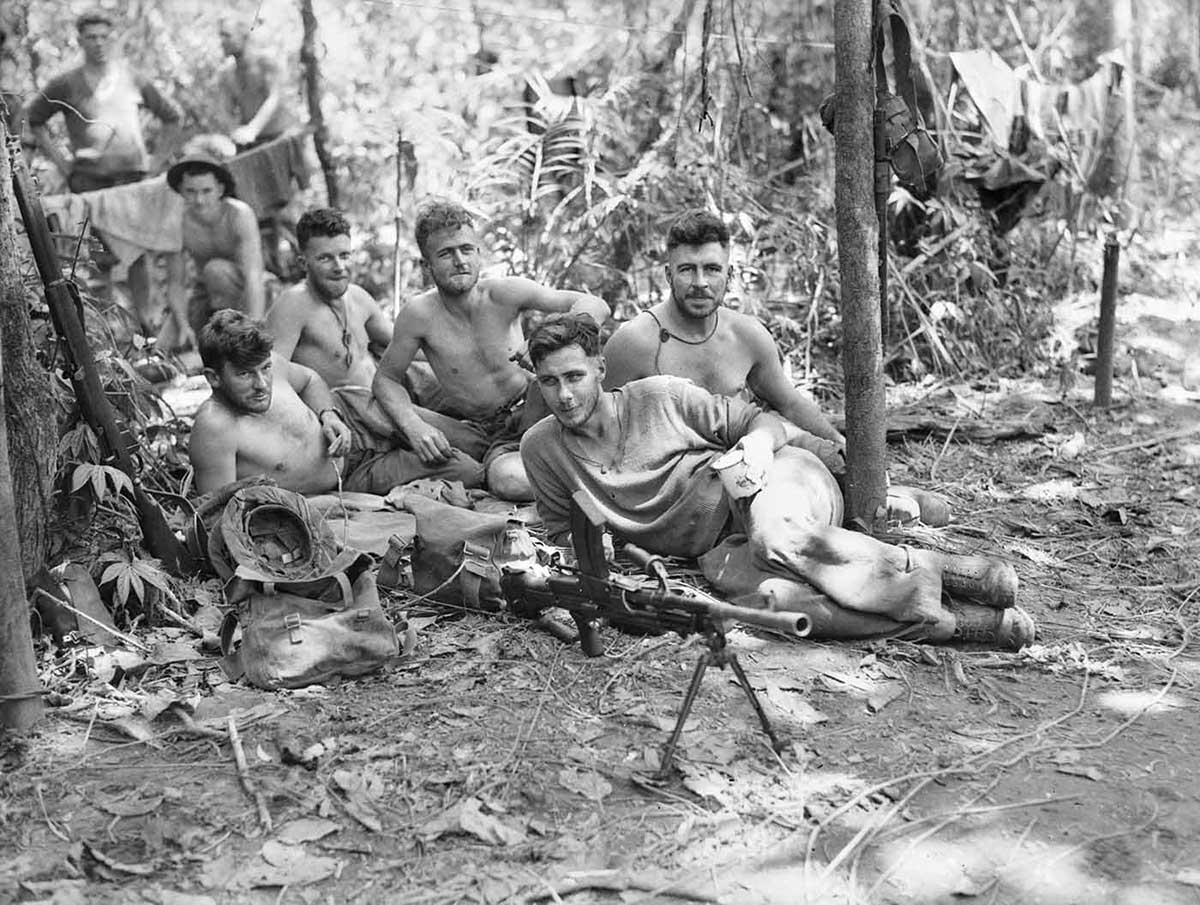 Men of the 2/31st Australian Infantry Battalion stop for a rest in the jungle between Nauro and Menari, Papua New Guinea, 1942

After the fall of Singapore in February 1942, the focus of the Pacific War moved closer to Australia.

Japanese forces bombed Darwin and launched an attack over Papua’s Owen Stanley Ranges with a view to capturing Port Moresby.

The campaign was a crucial point in stopping the Japanese advance across the Pacific and towards Australia.

In the Kokoda battle, [the Australian soldiers’] qualities of adaptability and individual initiative enabled them to show tremendous ability as fighting men in the jungle. They were superb. 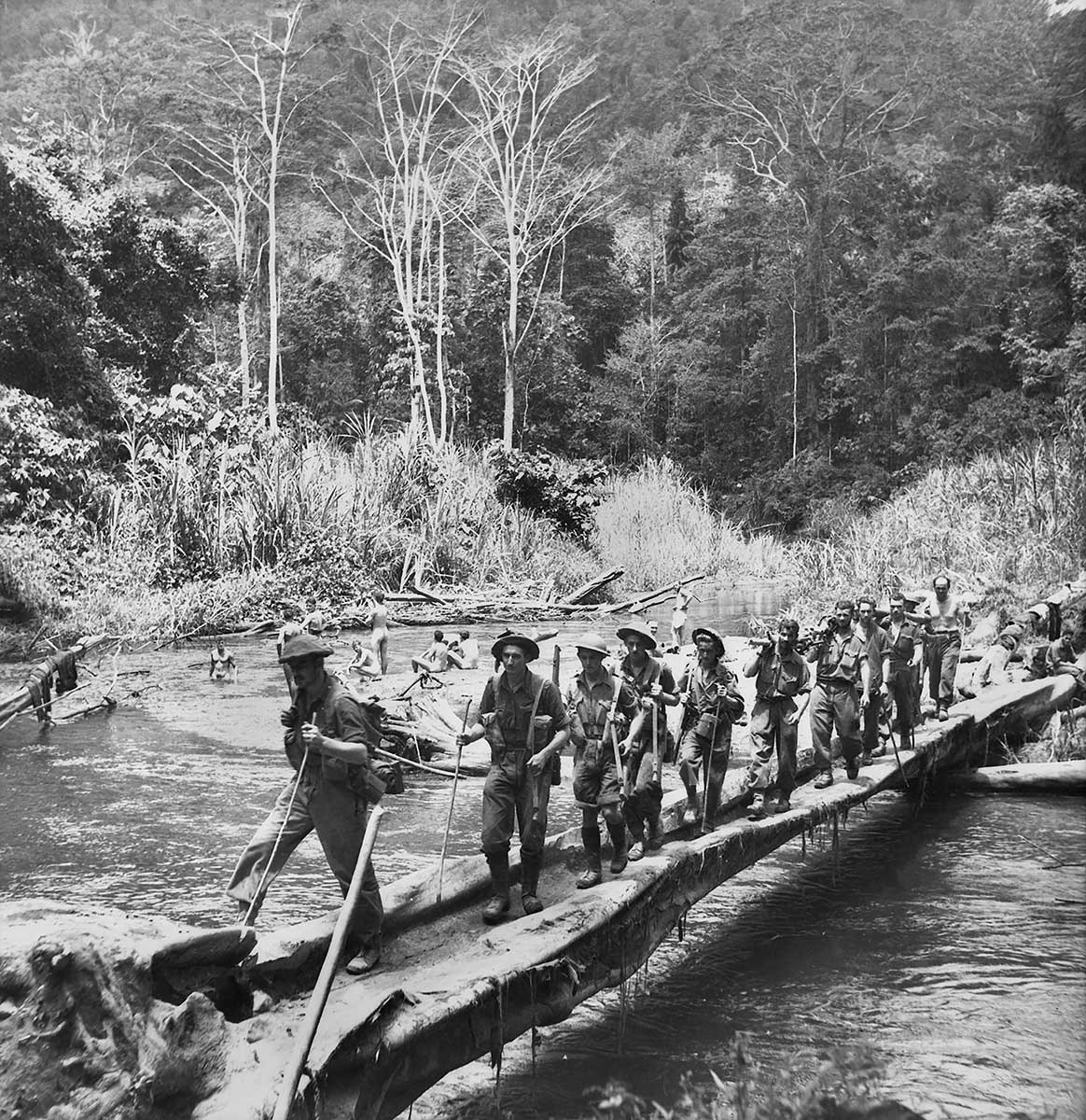 After the fall of Singapore in February 1942, the focus of the Pacific War moved further east. Japanese forces invaded Timor on 20 February 1942 and, in a move to disrupt the supply lines necessary for a counter-attack, bombed Darwin the day before. The attack was also intended to lower Australian morale.

The raid, which involved 54 land-based bombers and 188 aircraft launched from carriers in the Timor Sea, left 243 people dead, up to 400 wounded, and most of the city’s civilian and military infrastructure destroyed. Many residents feared that this was the precursor to an invasion and began streaming out of the city. Eventually half the population fled.

The Japanese did not invade, but they did bomb Darwin another 63 times during the war as well as other towns in northern Australia.

Battle of the Coral Sea

On 23 January 1942 a month prior to the bombing of Darwin, the Japanese military captured Rabaul, situated on the northern tip of the island of New Britain. Rabaul became the largest Japanese base in the southwest Pacific and from there the Imperial Japanese Army planned to capture Port Moresby, the capital of the Territory of Papua.

The first Japanese attempt to capture Port Moresby, Operation Mo, got underway in April. Unknown to the Japanese navy, the United States Navy learned of the Japanese taskforce by deciphering Japanese coded communications. The US Navy intercepted the Japanese fleet at the Battle of the Coral Sea and forced it to withdraw.

This represented a strategic victory because it was the first time in the Second World War that a Japanese invasion force had been turned back.

The capture of Port Moresby remained a Japanese priority as it would enable them to bomb vital Allied bases in northern Australia.

The Kokoda Trail, a rough foot trail that traversed the mountains, was the only viable route from the north to the south of the island.

On 21 July 1942 the 15th Independent Engineer Regiment of the Japanese army landed at Buna and Gona. The group was supposed to assess the viability of an assault across the ranges, however an all-out offensive soon developed as they came under attack from the Papuan Infantry Battalion and an Australian militia unit, the 39th Battalion.

By 24 July the Japanese had more than 4,000 men on shore while the Australians had only 420 dispersed troops, known as Maroubra Force. Small skirmishes occurred between the forces until the Japanese commander, Major-General Tomitaro Horii, reinforced his position and force-marched his men 120 kilometres into the mountains.

A month later he had 3,000 men in advanced positions and launched an attack on the Australians at Isuvara. Though he pressed the Australians into retreat he was unable to destroy Maroubra Force. The Australians regrouped and were reinforced at Efogi, but the Japanese were able to outflank them and again forced a retreat.

Meanwhile, at Milne Bay on 26 August the Japanese navy landed almost 2,000 men to occupy the newly completed Allied airfield, but fierce fighting ensued and they were pushed back.

On 14 September the Japanese made their farthest advance on the Kokoda Trail and reached Iorobaiwa Ridge, about 40 kilometres from Port Moresby. Here, a stalemate ensued until American forces invaded Guadalcanal in the Solomon Islands.

The loss of more than 31,000 Japanese troops in the Guadalcanal campaign forced the Japanese army to redeploy troops from New Guinea and pull back to the north side of the Owen Stanley Ranges.

On the Kokoda Trail, the Australians were now on the offensive. They had gained valuable jungle warfare skills, were better equipped, and their troops were reinforced.

The Japanese planned to make a defensive stand at Oivi-Gorari, where the Australians arrived on 4 November 1942. General Horii had 2800 men dug in around the village but the Australians outflanked them and forced a retreat back to Buna and Gona, which the Allies besieged for the next three months.

Eventually, on 21 January 1943, all Japanese resistance on Papua ceased. More than 600 Australian soldiers were killed and 1600 wounded. More than 10,000 Japanese also died.

Kokoda was a desperate and vicious campaign that saw enormous suffering on both sides. It was however crucial for the Allies in turning the Pacific War from one of defence to one of offence.

Raising the Japanese Midget SubmarineA postcard featuring a black and white photograph of a submarine being lifted out of the water with ropes. Printed text on the back of the postcard reads in part "...souvenir of the Exhibition / of Japanese Midget Sub- / marines sunk in Sydney Har- / bour on the night of Sunday, / May 31st, 1942..." Also printed on the back of t...