2003: Four people die and 510 properties are destroyed in Canberra firestorm 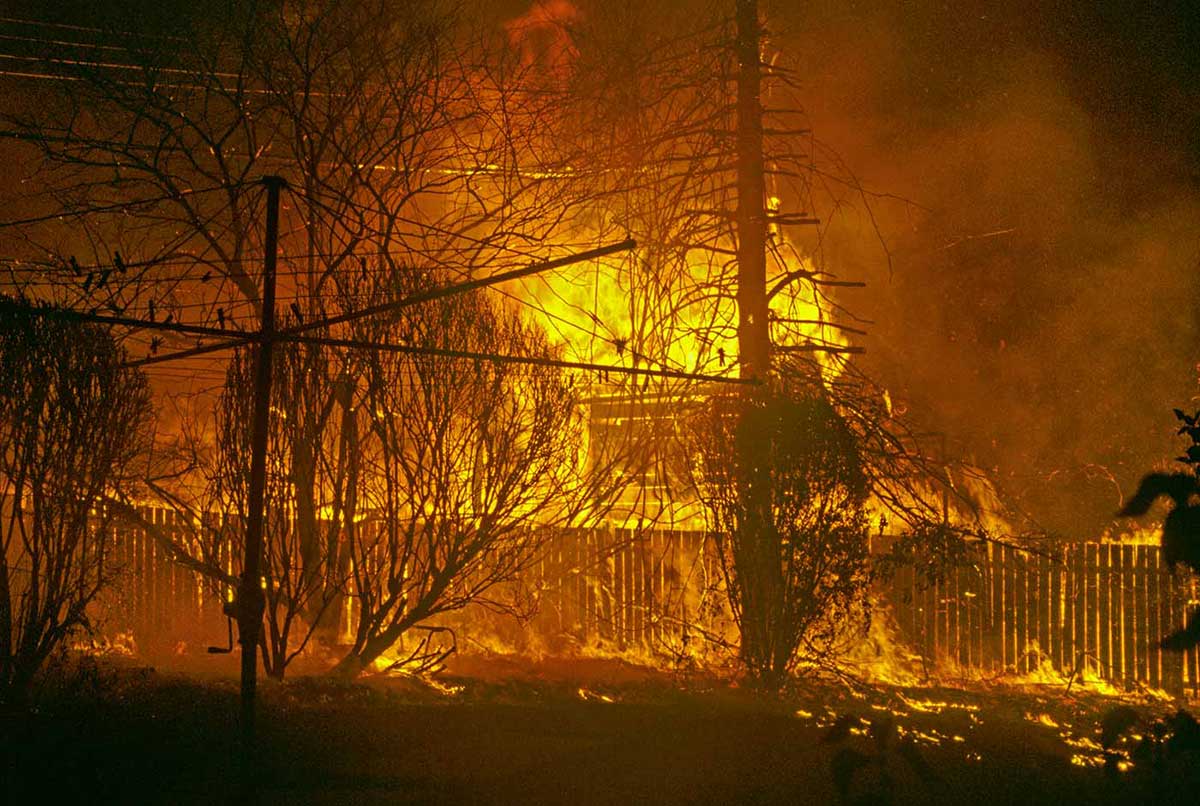 On 18 January 2003 the Australian Capital Territory (ACT) experienced the most destructive bushfires in its history. Four people died, hundreds were injured and 510 properties were destroyed.

The fires were subject to several inquiries and a coronial inquest, which produced far-reaching recommendations to improve the ACT’s fire response.

It was awful. My neighbours’ houses were alight. Just [like] Armageddon.

Over the past century the ACT has experienced several major bushfires during the hot and dry summer months. Most have been caused by lightning strikes in the Brindabella Ranges on the ACT’s western border.

The 2003 Canberra bushfires resulted in a catastrophic firestorm that struck rural and urban areas of the ACT on 18 January. 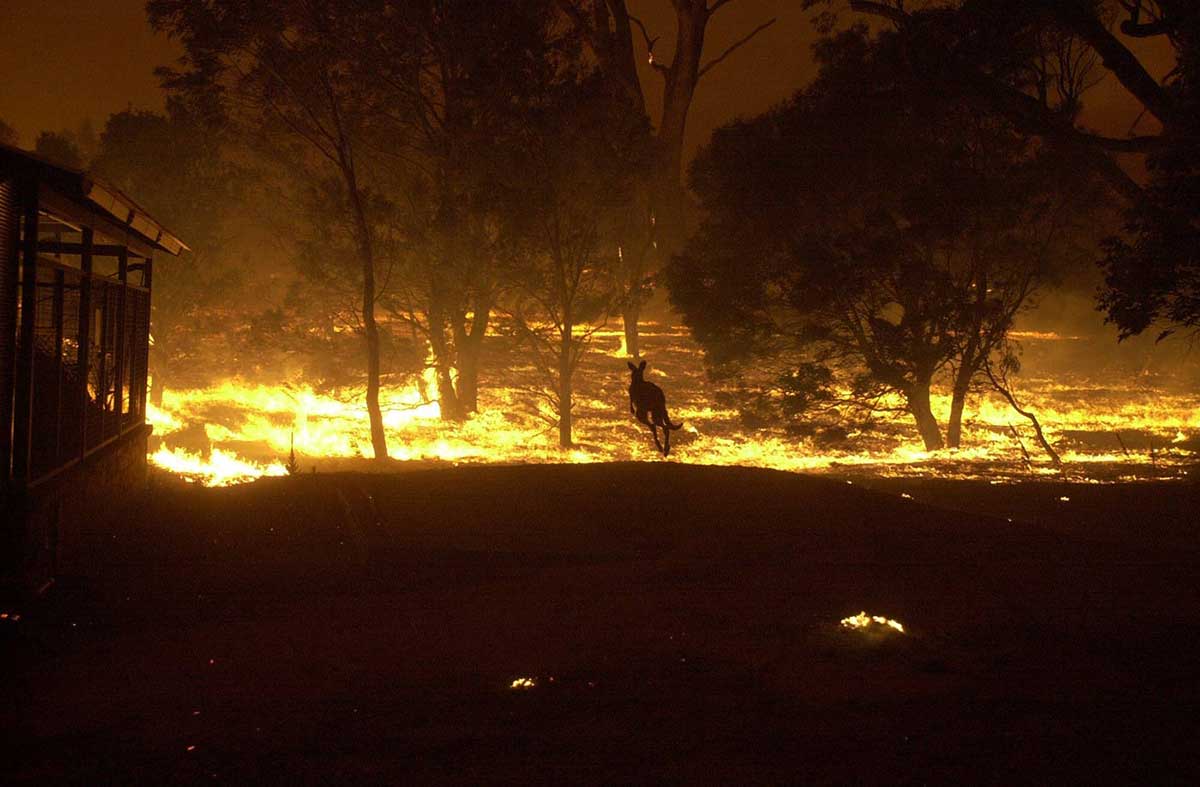 Lead up to the firestorm

In 2002 Australia was in the grip of one of the most severe droughts on record. The ACT experienced critically low rainfall and humidity and record high temperatures. These weather conditions and tinder-dry vegetation created an extreme fire risk across the territory.

Despite suppression operations and relatively mild weather conditions, the fires expanded out of control, eventually merging to produce the firestorm that hit Canberra 10 days later.

By evening, the McIntyres Hut, Bendora and Stockyard Spur fires had broken containment lines and were spotting several kilometres ahead.

As conditions worsened, firefighters were withdrawn from the fires and redirected to the task of protecting rural properties. Spot fires were threatening the Tidbinbilla Nature Reserve and were burning only two kilometres from the Uriarra pine plantation, just 12 kilometres from the outer suburbs of Canberra.

On the morning of 18 January the McIntyres Hut fire crossed the border into the ACT. By midday it had entered the Uriarra pine plantation.

The temperature peaked at 37 degrees Celsius, with westerly winds gusting to 55 kilometres per hour. Spot fires from the Bendora and Stockyard Spur outbreaks were threatening rural settlements, infrastructure and properties to the south-west of Canberra.

By 2.30pm the McIntyres Hut fire crossed the Murrumbidgee River, starting a spot fire in the Stromlo pine plantation west of the Mount Stromlo Observatory.

At 2.45pm the fire raced up the western slopes of Mount Stromlo, before merging with the Bendora fire. The flames were visible from north Canberra.

The first public emergency warning was broadcast about 2.40pm, listing the Weston Creek suburbs of Duffy, Rivett, Chapman and Holder as most at risk.

At 2.45pm the ACT Chief Minister, Jon Stanhope, declared a state of emergency. About 15 minutes later the firestorm hit the suburb of Duffy. Over the next few hours it devastated houses in the suburbs of Holder, Weston, Chapman, Rivett and Kambah.

The fires overwhelmed firefighters and caused a power and communications blackout. In the ensuing confusion and panic, thousands of residents fled the burning suburbs in their cars. Others stayed, desperately trying to protect their homes. Canberra Hospital was overrun with people suffering burns and smoke inhalation.

And then, without warning, the main blaze hit us … The trees had transformed into a wall of fire … An unstoppable mass of fire – like nothing I had ever seen in my life. 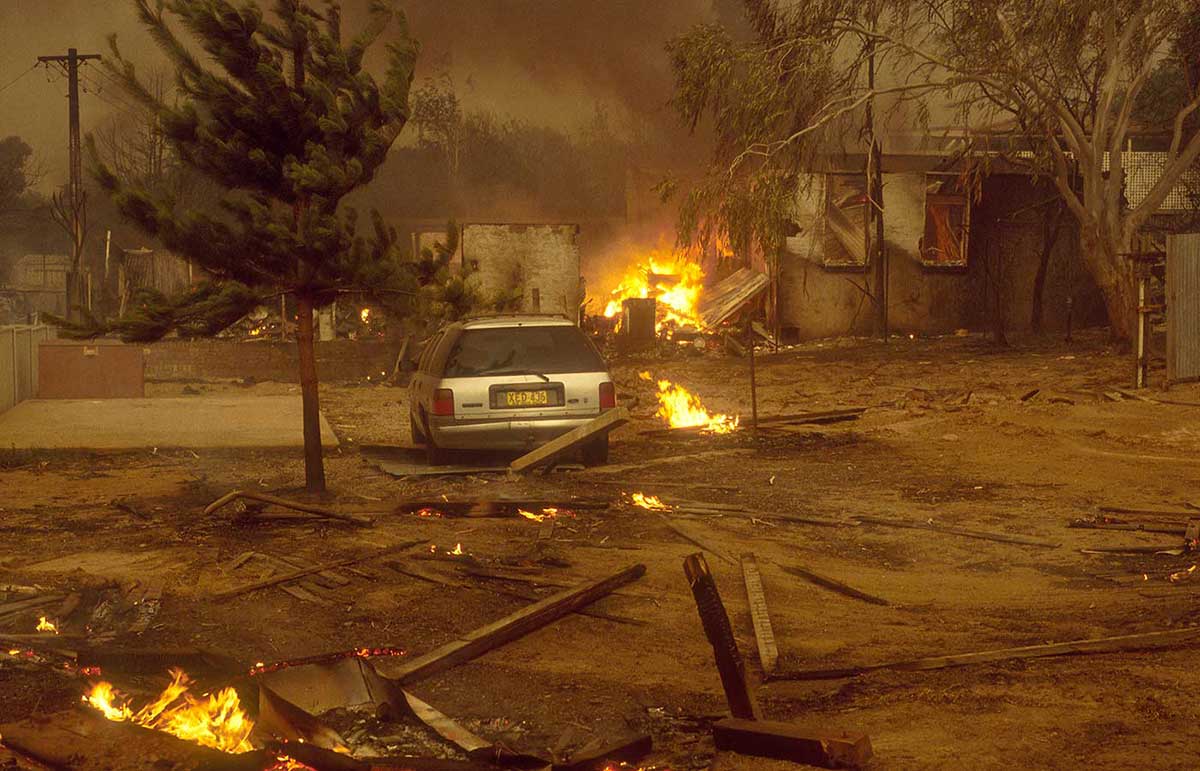 An unprecedented fire tornado left a trail of destruction in the Uriarra and Pierces Creek pine plantations and caused severe wind and fire damage, particularly in the suburbs of Chapman and Kambah.

Consequences and aftermath of the Canberra fires

Four people died and 435 were injured as a result of the Canberra fires. Almost 70 per cent of the ACT was burned. A total of 487 homes and 23 government and commercial buildings were destroyed, including the internationally renowned Mount Stromlo Observatory. The estimated financial cost of the fires was between $600 million and $1 billion.

The disaster prompted a series of major inquiries, including the ACT Government’s McLeod Inquiry and the ACT Coroner’s Inquiry. Both criticised the authorities for underestimating the scale of the firestorm and made recommendations to improve the ACT’s future fire response.

The ACT coroner’s report found that the ESB failed to aggressively attack the fires in the first few days or to provide adequate warning to the community about the growing fire danger.

The coroner also acknowledged that:

... once the four fires had combined to produce the firestorm on 18 January, containment and control were impossible, despite the best efforts of the firefighters.

The McLeod report highlighted structural inefficiencies in the ACT’s emergency services operations. It led to the Emergencies Act 2004 and the creation of the Emergency Services Agency (ESA), Australia’s first unified emergency agency.

The response to the fires also included a major new scientific program that examined Australian fire thunderstorms. In 2012 researchers documented the Canberra event as the world’s first confirmed case of a ‘fire tornado’. In the words of lead researcher Rick McRae, ‘the study provides crucial information on fire behaviour’.

According to ACT Senior Fire Management Officer Stephen Wilkes, the ‘2002–2003 bushfire season was a pivotal time in the history of how our society approaches bushfire management’ and ‘opened the door to bushfire operational data being made available to the wider scientific community’. 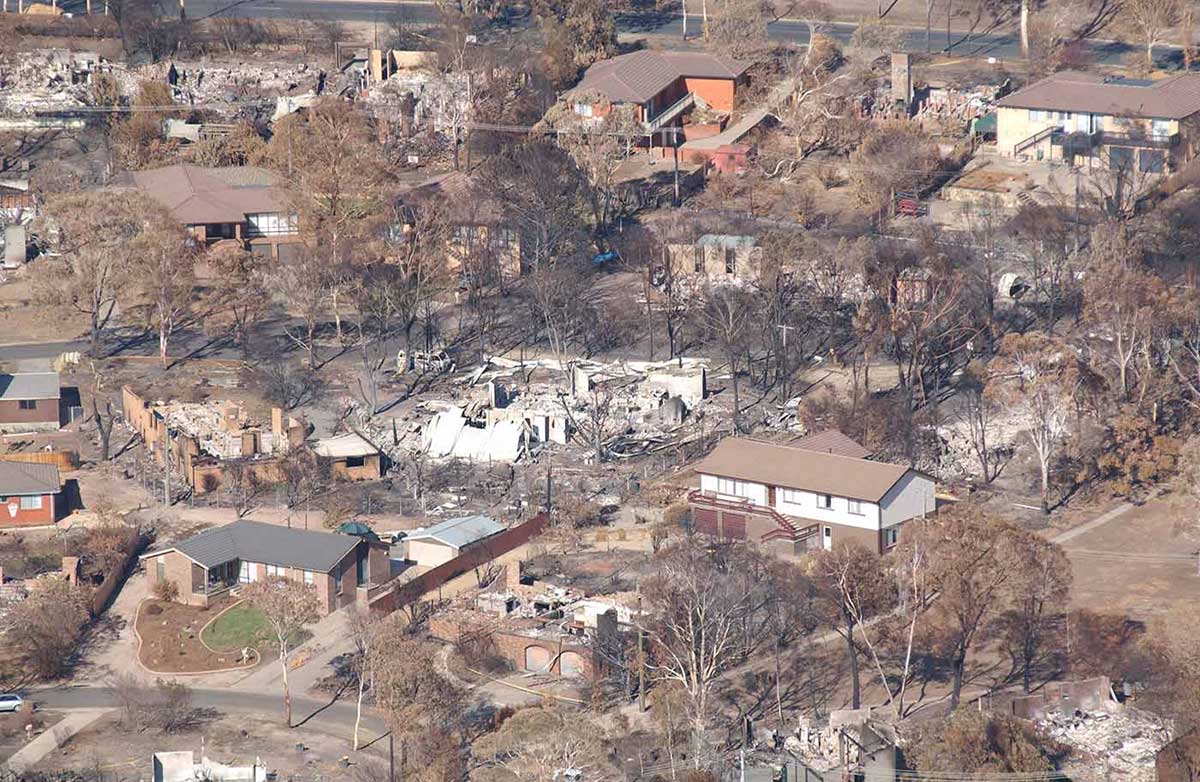 In 2016 an ESA spokesman announced that all of the agreed recommendations from the McLeod and coronial inquiries had been implemented.

However, ESA commissioner Dominic Lane warned Canberrans ‘not to be complacent that such a catastrophic event could never happen again and said living in the bush capital “comes with an element of risk”’.

In January 2020 bushfires again burned out of control in the ACT, this time in the Namadgi National Park.

Emergency Services Minister Mick Gentleman assured residents that the ACT Government was well prepared for emergencies and had ‘taken significant steps over the last 17 years to ensure that the lessons learned from 2003 have been applied across our emergency services’.

Eighty per cent of Namadgi was burnt and a number of properties to the south of the ACT – in the Bumbalong Valley and near Bredbo and Michelago – were destroyed. However, Canberra’s suburbs – and the township of Tharwa which came under direct threat – were spared.

'A Nation Charred: Report on the Inquiry into Bushfires', House of Representatives: Select Committee into the Recent Australian Bushfires, Commonwealth of Australia, Canberra, 2003.

Maria Doogan, 'The Canberra Firestorm: Inquests and Inquiry into Four Deaths and Four Fires between 8 and 18 January 2003: Volume I', ACT Magistrates Court, Canberra, 2006.

Ron McLeod AM, 'Inquiry into the Operational Response to the January 2003 Bushfires in the ACT', ACT Government, Canberra, 2003.