2012: Fourth inquest into the death of Azaria Chamberlain finds that she died as the result of being attacked or taken by a dingo 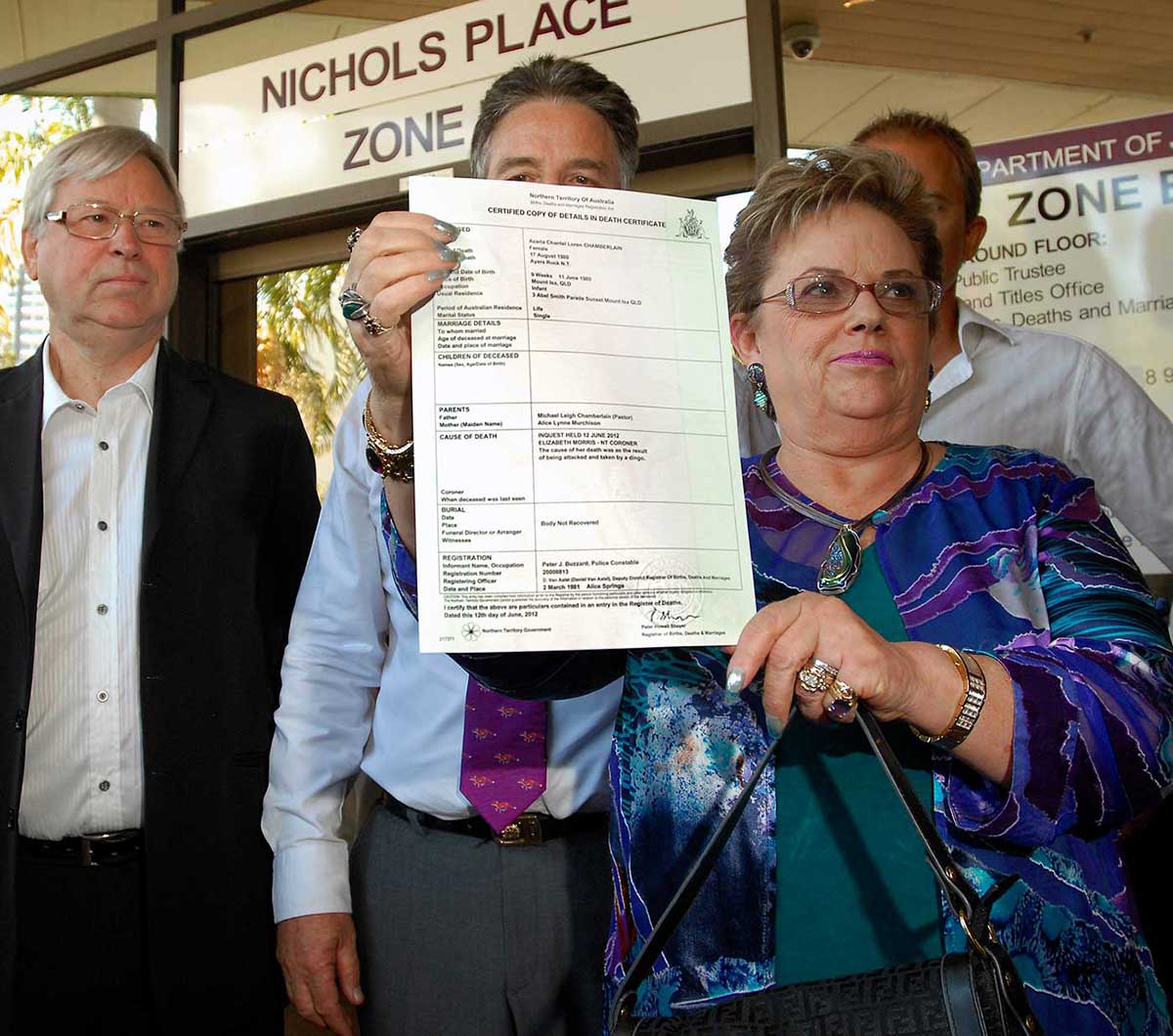 On 17 August 1980 nine-week-old Azaria Chamberlain was taken by a dingo from a tent at Uluru. Her death led to one of Australia’s biggest legal and media events.

It was not until 2012, at a fourth coronial inquest, that a certificate was finally issued stating her true cause of death.

Please accept my sincere sympathies on the death of your special and loved daughter and sister Azaria. I am so sorry for your loss. Time does not remove the pain and sadness of the death of a child.

Michael and Lindy Chamberlain arrived at Ayers Rock (now Uluru) on 16 August 1980 with their two sons, Aidan and Reagan, and their baby daughter, Azaria.

The following day the family explored the area and climbed the rock. That evening the family cooked dinner at the communal barbecue area and chatted with other families.

Lindy settled Reagan and Azaria to sleep in the tent and returned to the barbecue area. At around 8pm Azaria was heard to cry out. As Lindy went to check on her, she saw a dingo leaving the tent.

Lindy dived frantically into the tent and found her baby gone. Her cry – ‘A dingo’s got my baby!’ – rang out across the campground. It has since become etched into Australia’s cultural memory. 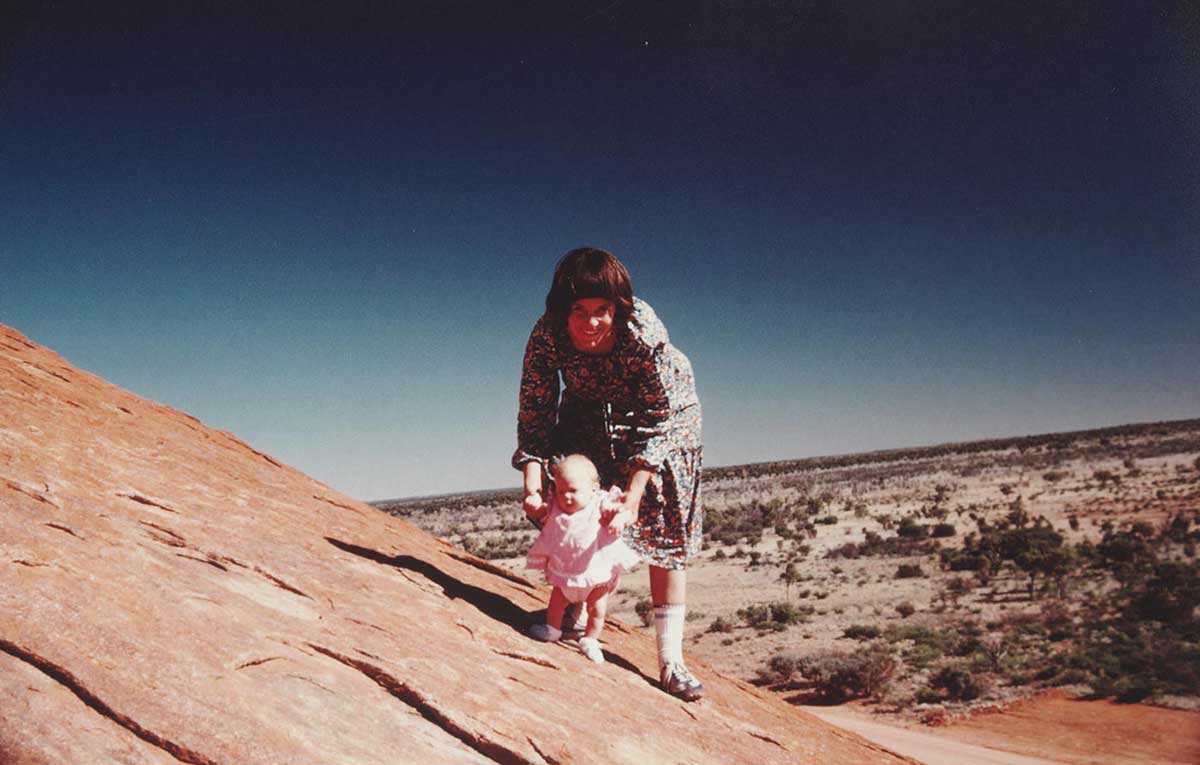 Despite extensive searches, no trace of Azaria was found. Items of her bloodstained clothing were located seven days later in boulders near the base of Uluru.

From the moment the first reports appeared, the death of baby Azaria captured the attention of the nation. Speculation regarding the events of that night filled papers, magazines and television reports across the country.

The first inquest into Azaria’s death was held at Alice Springs. On 20 February 1981 Coroner Denis Barritt found that Azaria had met her death when attacked by a wild dingo.

In an unprecedented move, Barritt allowed his concluding remarks to be televised. They included this statement:

You have not only suffered the loss of your beloved child in the most tragic circumstances, but you have all been subjected to months of innuendoes, suspicion and probably the most malicious gossip issued in this country. 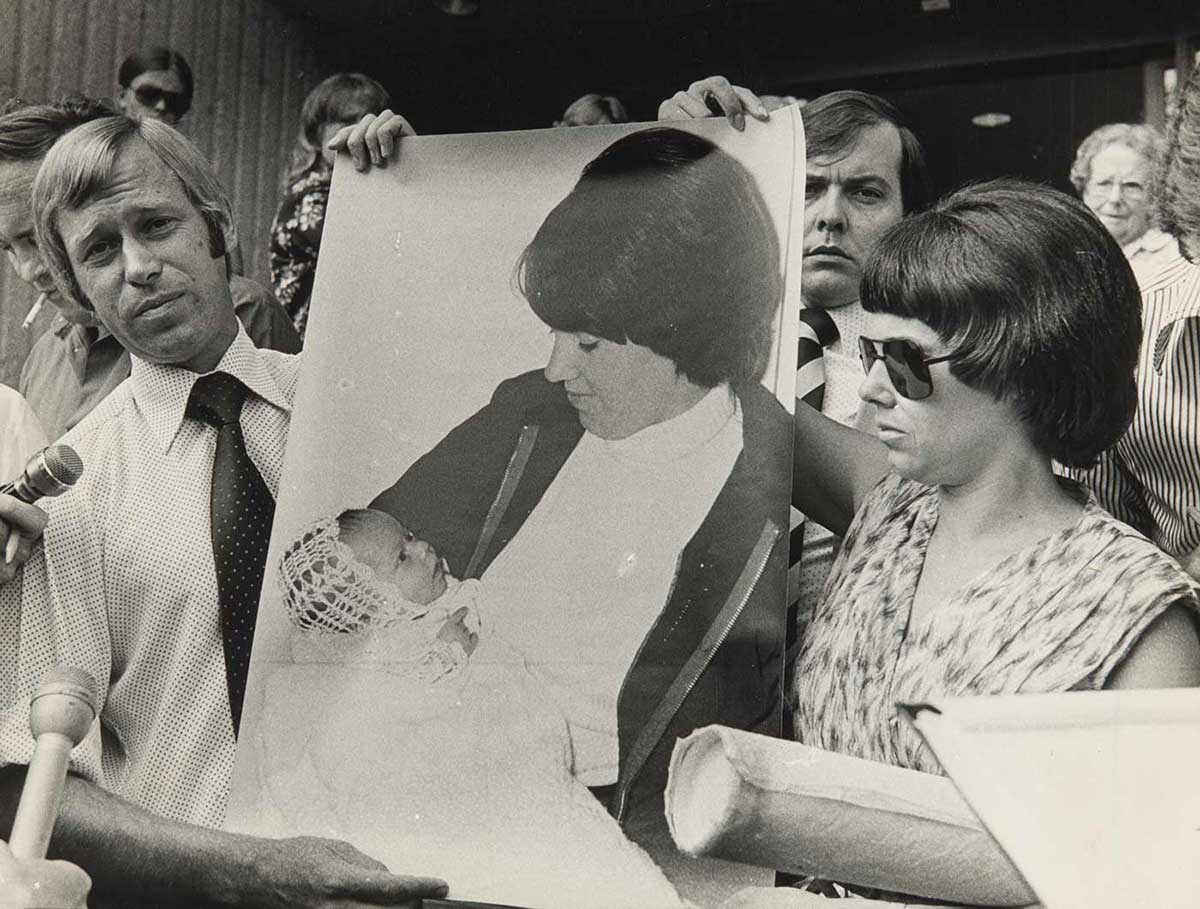 Michael and Lindy Chamberlain on the steps of the Alice Springs courthouse after the findings of the first inquest, 1981

A number of people were dissatisfied with Barritt’s findings. Some experts, such as Kenneth Brown, the forensic dentist who had given evidence at the inquest, felt their work had been called into question.

Brown sent Azaria’s clothing to Professor James Cameron, a British forensics expert, for further examination. His results, together with significant pressure from the Northern Territory Government and police, led to the first inquest’s findings being quashed.

The police raided the Chamberlain house, and the rumour mills went into overdrive. Every aspect of the Chamberlains’ life became fodder for the next media story.

On 2 February 1982 a second inquest found that Lindy should be charged with murder, and Michael as an accessory after the fact. 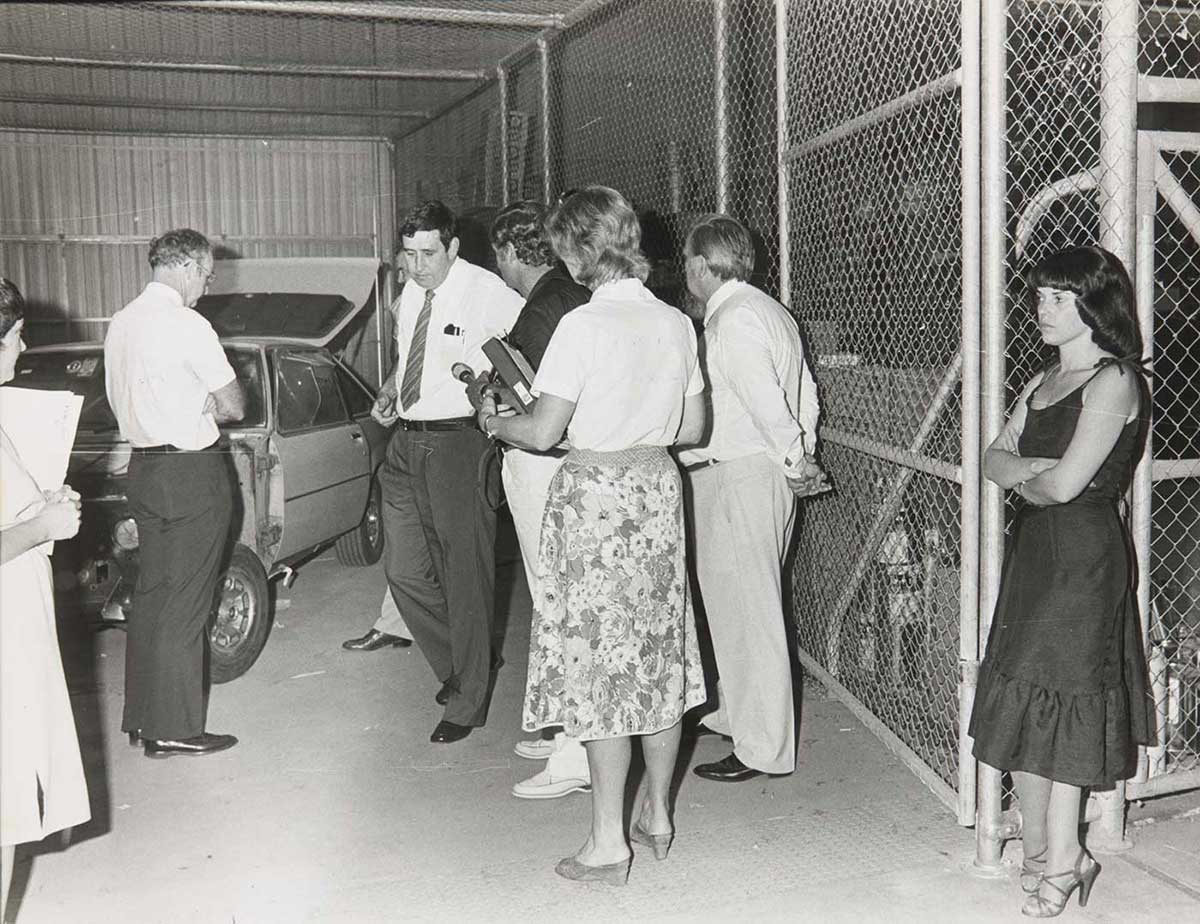 The trial ran from 13 September until 29 October 1982. Australia watched every moment, captivated. Outside the courthouse, stalls were set up selling souvenirs and T-shirts.

The prosecution held that Lindy had murdered Azaria and concealed her body in the family’s Torana, and that the couple had later disposed of it.

A range of experts presented forensic evidence. Much of it has since been proven to be flawed or incorrect.

A spray pattern found under the dashboard of the Chamberlains’ car, said by the prosecution to be fetal blood, was actually a sound-deadening bituminous compound applied during the car’s manufacture.

The Chamberlains had the unwavering support of the other campers present that evening, and Indigenous trackers gave evidence that supported their accounts.

Furthermore, senior park rangers testified to dingo attacks on children having occurred in the area in the months preceding Azaria’s death.

Nevertheless, the Chamberlains were found guilty.

We need to educate the public with regard to the dingo. We need to emphasis the dingo is a scavenger, hunter and opportunist.

Lindy was found guilty and sentenced to life in prison with hard labour. Michael received an 18-month suspended sentence.

Lindy Chamberlain was sent to Darwin’s Berrimah prison. It was there that Kahlia Chamberlain, Michael and Lindy’s second daughter, was born in November 1982.

Two appeals followed. The first, heard by the Federal Court in April 1983, was rejected. The second was lost in the High Court of Australia in February 1984.

The Chamberlain Innocence Committee was formed with the aim of building public support for a new inquiry. A crucial piece of evidence – Azaria’s matinee jacket, which police had insisted did not exist – was finally found six years after Azaria had been taken.

Lindy was released from prison in February 1986.

In 1986 Trevor Morling headed up a royal commission into the Chamberlains’ convictions. The convictions were overturned. However, it still returned an open verdict, despite Morling’s finding that the ‘evidence affords considerable support for the view that a dingo may have taken [Azaria]’.

The Chamberlains were exonerated in September 1988.

In 1985 John Bryson’s book about the case, Evil Angels: The Case of Lindy Chamberlain, was released. It drew attention to various forensic inconsistencies and helped change public attitudes.

The film of the book came out in November 1988, with Meryl Streep portraying Lindy. That same year, the Supreme Court of Darwin quashed all convictions and declared the Chamberlains innocent.

In 1992 the Chamberlains, who had divorced a year earlier, were paid compensation. At a third inquest, held in 1995, the cause of Azaria’s death was left as ‘open’. 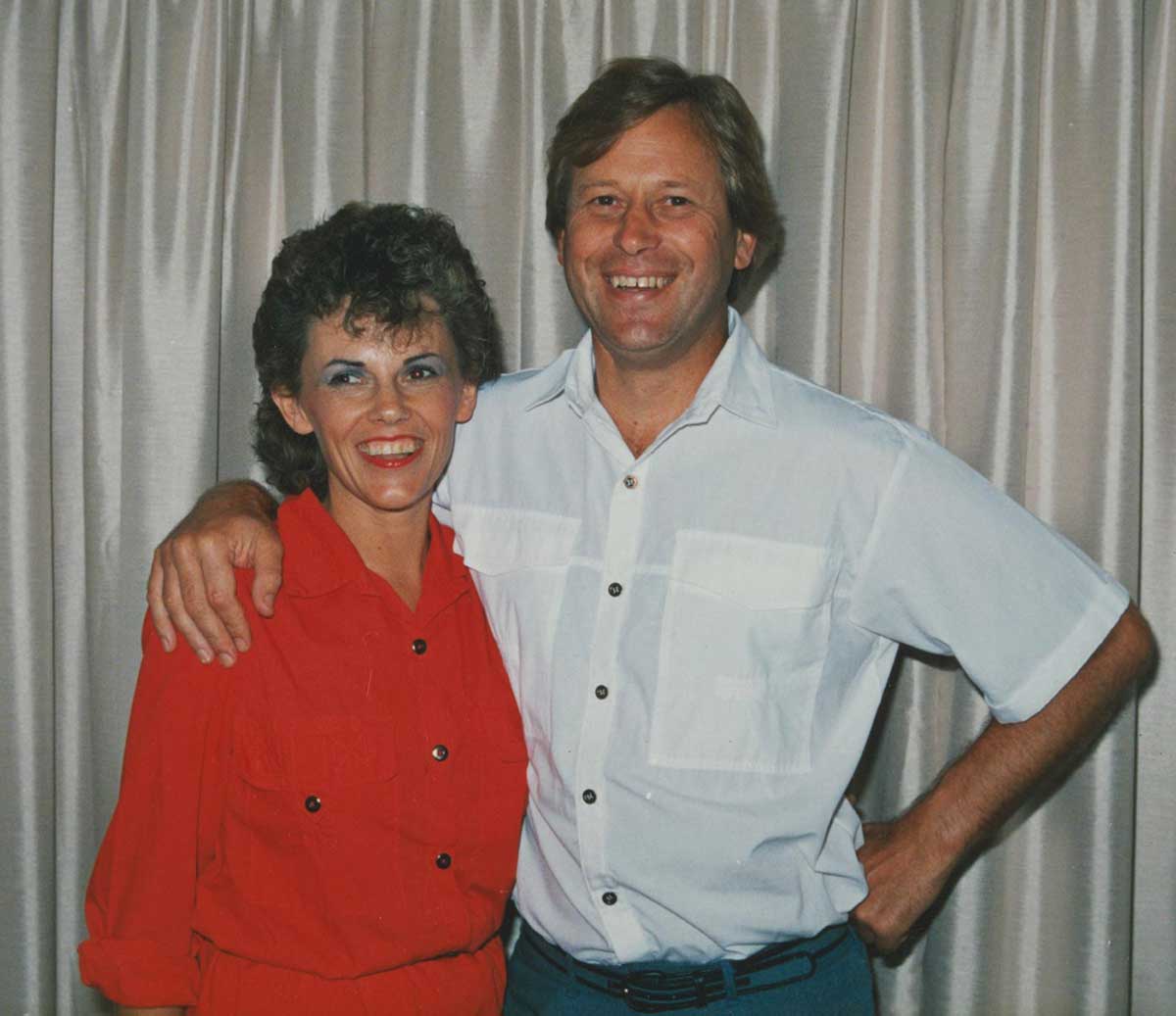 Lindy and Michael Chamberlain after Lindy’s release from prison, 1986

In 2012 a fourth inquest, held 32 years after Azaria’s death, agreed with the first inquest. Coroner Elizabeth Morris found that ‘the cause of her death was as the result of being attacked and taken by a dingo’.

After the findings were handed down, Michael Chamberlain declared:

This battle to get to the legal truth about what caused Azaria’s death has taken too long. However, I am here to tell you that you can get justice, even when you think that all is lost.

Outside the court Lindy Chamberlain stated:

No longer will Australia be able to say that dingoes are not dangerous and only attack if provoked. We live in a beautiful country but it is dangerous

Azaria Chamberlain's black dress, pilchers and booties setThis outfit was made by Lindy Chamberlain for her son Reagan and was also worn by her daughter Azaria. The dress achieved notoriety after Azaria was killed by a dingo on a family camping trip to Uluru in 1980. As it was unusual to see a baby dressed in black, the rumour that 'the baby was always dressed in black' was considered...