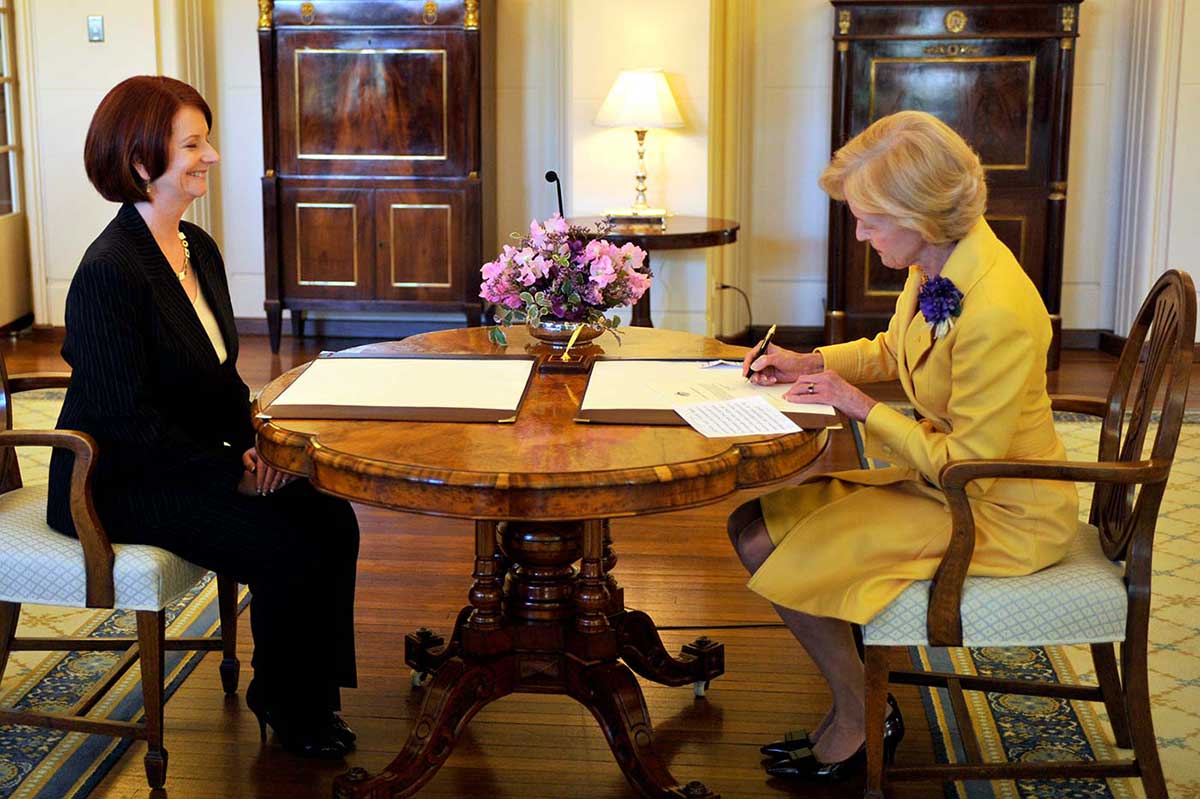 This day marked a milestone in Australian politics with women filling the two highest positions in the nation, 116 years after women first obtained the vote in South Australia.

For me, for my generation, it was a time to pause, to acknowledge a milestone of magnitude in our history … I could never have imagined at the time of my own swearing in or that of Prime Minister Gillard the extent of the political turmoil that lay ahead … It won’t be the same for the next woman. Tough, yes … but not as tough. There is nothing like being the first.

Dame Quentin Bryce was born in Brisbane and raised in country Queensland. She graduated from the University of Queensland with bachelor’s degrees in Arts and Laws in 1965 and became one of the first women in Australia to be admitted to the Queensland Bar.

Before being appointed governor-general, Bryce held many distinguished positions, including Director of the Australian Human Rights and Equal Opportunity Commission and federal Sex Discrimination Commissioner. She was appointed Governor of Queensland in 2003.

In 2008, owing to her outstanding record of achievement and contribution to Australia, Dame Bryce was nominated for the role of governor-general. When she was sworn in on 5 September that year, she became the first female to serve in the position.

Born in Wales in 1961, Julia Gillard emigrated to Australia with her family in 1966. In her early years, Gillard was strongly influenced by the progressive ideals of her parents.

This led her to become a member of the Australian Labor Party (ALP) in 1979, while at the University of Adelaide. She also joined the Australian Union of Students, eventually moving to Melbourne as its vice-president (and later national president).

Graduating from the University of Melbourne with bachelor’s degrees in Arts and Laws, Gillard worked for the law firm Slater and Gordon before being elected to the House of Representatives as the Labor Member for Lalor in 1998. 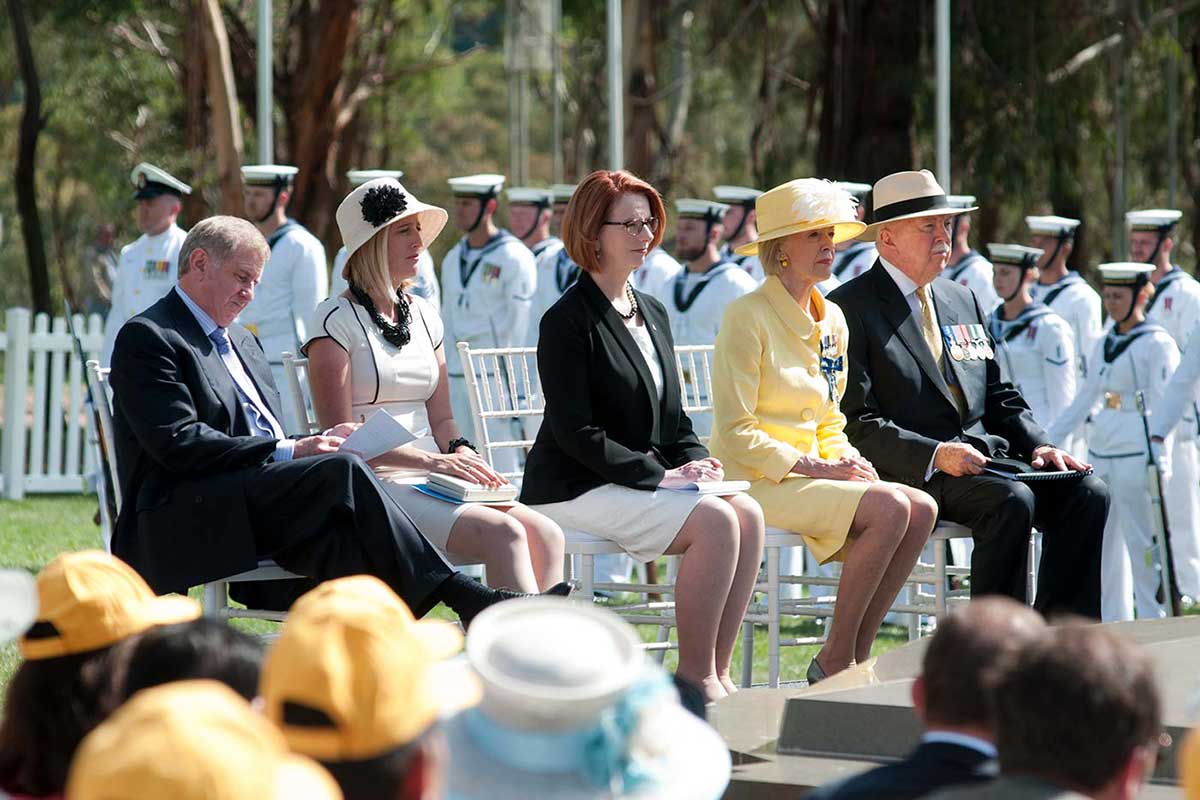 The ceremony to mark the centenary of Canberra on 12 March 2013 was attended by three women leaders: ACT Chief Minister Katy Gallagher (on the right of Minister for Regional Affairs Simon Crean), Prime Minister Julia Gillard and Governor-General Quentin Bryce

During Labor’s period of political opposition during the Howard years, Gillard held many positions within the party, including various shadow ministries. She was elected deputy leader of the Labor Party under Kevin Rudd in 2006. When Labor won the federal election the next year, she became the first female deputy prime minister of Australia.

In 2010 a party room challenge resulted in Rudd losing the Labor leadership and Julia Gillard being elected in his place. Subsequently, on 24 June, Governor-General Quentin Bryce swore her in as the first female prime minister of Australia.

The date of Gillard’s swearing-in marked a significant milestone in Australian politics.

One hundred and sixteen years after women were given both the right to vote and the right to stand for parliament (in South Australia in 1894), two women held the highest offices of the country at the same time.

Australia was one of the first nations in the world to allow women to vote federally and stand for election to parliament.

However, it was a long time between the introduction of state and federal voting legislation and women receiving representation in either level of government.

The first woman in any Australian parliament was Edith Cowan, elected in Western Australian state elections in 1921, 22 years after female suffrage was introduced in the state. Not until 1943 did women enter federal parliament, with Dorothy Tangney and Enid Lyons elected to the Senate and House of Representatives respectively.

The swearing-in ceremony on 24 June 2010 served as a reminder of how far women had come in Australian politics and public life, and of the long journey towards female leadership at the highest levels. But it also highlighted a disparity in women’s representation in public life that continues to this day.

There still has not been a female leader of the opposition in Australian politics, and no female prime minister or governor-general since Julia Gillard and Dame Quentin Bryce.

Following the 2019 federal election, women made up 47 per cent of the ALP’s ranks and outnumbered men in the Senate. However, the Liberal Party only reached 23 per cent female parliamentary representation.

Neither party appointed women to their leadership teams.

Many other disparities persist. Despite the Commonwealth Conciliation and Arbitration Commission having awarded equal pay for work of equal value in 1972, women are still paid between 14 and 19 per cent less than men. And in 2018 only 29 per cent of board positions in the top 100 companies in the Australian Stock Exchange were held by women.

Cartoon titled 'Dues Paid', by Ian R. Sharpe, 2008This cartoon of Julia Gillard appeared in The Canberra Times on 20 July 2008. She became the first woman to hold the position of Deputy Prime Minister when the Australian Labor Party won the 2007 election. On 24 June 2010 Gillard became the first woman to hold the office of Prime Minister after she was elected in a ballot for t...