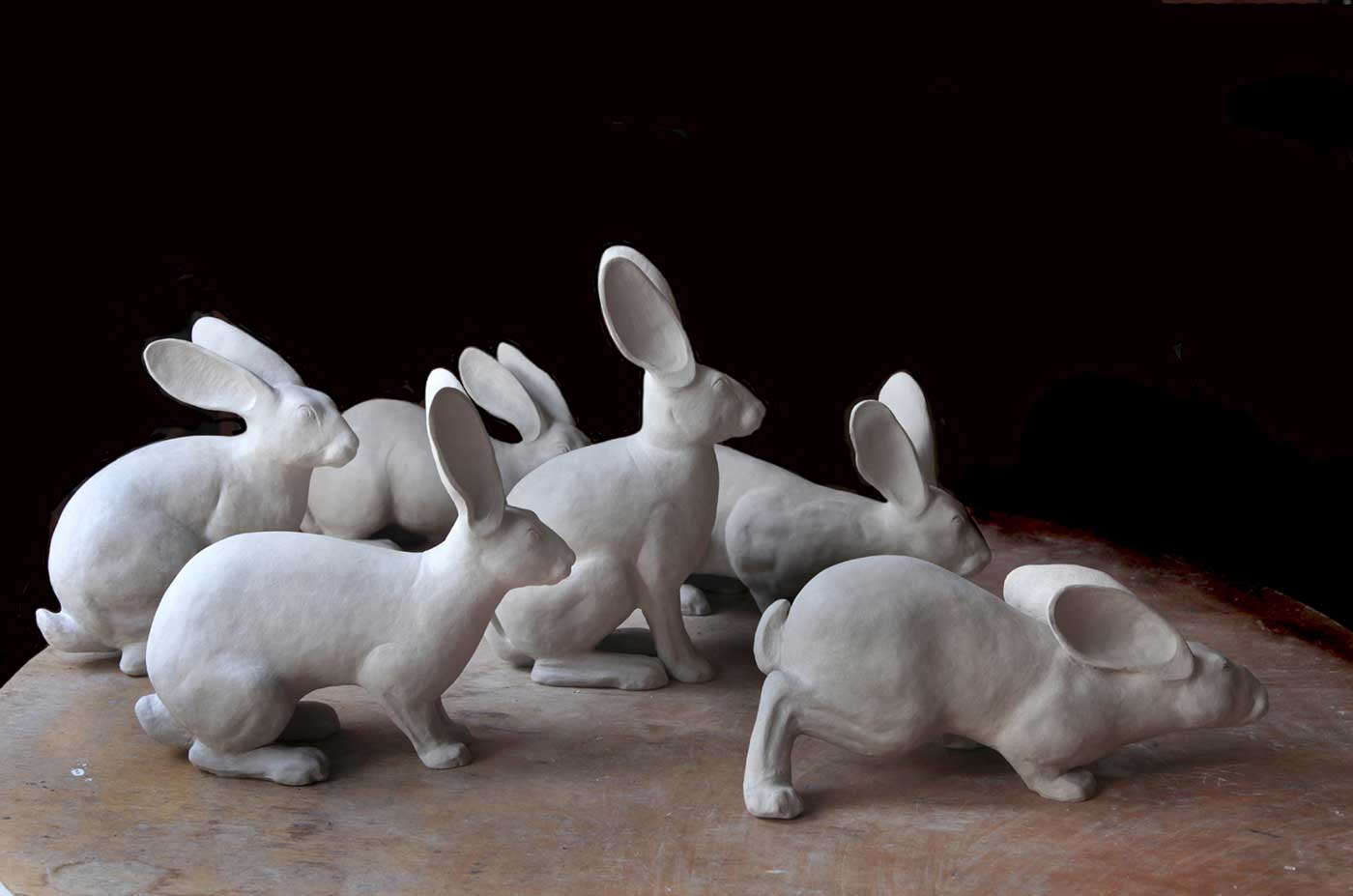 Exploring the relationship between humans and rabbits

Australian sculptor Jenny Pollak’s artwork, New World Order — Terra Australis, explores tensions and contradictions in the relationship between humans and rabbits. The title positions the work as a response to the idea of rabbits as an invading force, a population wiping out the established ways of living, and creating a ‘new world order’ in Australia.

‘Terra Australis’ is a Latin term meaning ‘land of the south’. Here, the artist plays on the European scientific tradition of Latin classifications for the natural world, and on the idea of rabbits as ‘terrors’ of the Australian continent.

Applied to this artwork, the title invites viewers to contrast the pet-like appeal of individualised rabbits with the capacity of rabbits en masse for disruption and destruction of native ecosystems.

Jenny Pollak was born and grew up in Sydney. Her father was a biochemist and her mother a biologist, zoologist and artist. Jenny and her siblings were encouraged as children to develop an awareness of the natural world.

As Jenny says, we ‘grew up looking down the microscope, having lots of animals around, going out looking in the bush'.

Pollak’s curiosity about scientific study of the natural world was piqued by childhood visits to her parents’ workplaces at the University of Sydney.

Jenny’s father worked in a ‘very untidy and fascinating’ laboratory full of flasks and machines. Her mother looked after the university’s zoological museum with, as she remembers, its collection of preserved ‘animals in glass containers [of] yellowing fluids’.

These experiences prompted Jenny and her siblings to experiment with the natural world: ‘we did, as children, pickle our pets when they died’.  They continue to influence her art practice today.

The art of Jenny Pollak: engaging the natural world

The art of Jenny Pollak: engaging the natural world 11:29

Jenny’s early experiences of rabbits were complex.On the one hand, she developed a love of nature and an understanding of the natural environment where she lived and saw the powerful effect of introduced, invasive species such as the rabbit on its animals, plants and environments.

On the other hand, as a child, Jenny and her sister Ana kept adored pet rabbits — one white, one black — that they took for walks.

In New World Order — Terra Australis Jenny aims to balance her concern for rabbits’ destructive impact with her admiration for their physical form and charm as companion animals.

The instantly appealing image of the rabbits belies the catastrophic impact its introduction (along with the fox) had on many species of native mammals. In this work I wish to suggest a tension between the rabbit’s appeal and the idea of a population at odds with its environment.

The sculptural forms do not, however, mirror wild rabbits. Jenny chose to shape them in particular ways to emphasise certain characteristics.

They have powerful legs, extended ears and highly-muscled bodies, suggesting the idea of a ‘super-rabbit’, an unstoppable animal capable of taking over a continent.

Jenny reinforces this sense of the rabbits’ power and energy by grouping the six figures together, emphasising their capacity for collective action. Each individual is unique, but they also clearly all belong together.

All the rabbits are the same colour, a pure white that is the colour of innocence, but by positioning them together, facing the same direction, moving forward, Jenny creates an expression of strength in numbers and suggests a unity of action and purpose that produces a slightly ominous undertone.

The difficult thing with making a work about rabbits is the image people have of the rabbit being a cute cuddly animal and particularly because they are pets … though increasingly in the suburbs here we see a lot of feral rabbits and councils are having a lot of trouble actually getting rid of them.

The rabbits in New World Order — Terra Australis stand and sit on a completely barren white surface, as if the ground has been picked clean. This references the impact of rabbits’ grazing.

Rabbits feed selectively on certain species, choosing plants at the critical early stages of seedling or grass establishment. This can result, even in good conditions, in the local extinction of native plant species and the opening up of spaces for noxious weeds to become established.

And rabbits can multiply quickly, often leading to the devastation of grasslands and other vegetation.

I think there’s something about the sculptural form that is very good in conveying a real presence that perhaps would not be conveyed in the same way by a painting or a photograph.

Jenny began developing New World Order — Terra Australis by researching images of rabbits and sketching them in a variety of poses in her ideas book.

She remembers, 'going to the library and [finding] one particular pose which I liked very much. There was something about the combination of lines in the pose of the rabbit that was just quite aesthetically beautiful'.

Jenny's preparation also involved photographing rabbit specimens at the Australian Museum in Sydney. She recalled: 'There's something about [those] stuffed rabbits. They had lost all the energy that the live rabbit would have had, they'd lost their line. [A]s a sculptor [it's] my job to put the energy back into it.'

After completing preparatory research, Jenny worked up a number of her favourite poses in clay. ‘[I] started with one rabbit and then all the other rabbits came along quite quickly after that, the way rabbits do in the wild.’

Each sculpture was modelled individually, using hands and fingers, with Jenny initially using ‘a lot of force’ on a big block of clay to achieve her desired shape. The legs, head and ears — features which express each rabbit’s individuality, energy and intention — were added separately.

While working up shapes, Jenny sprayed the clay with water or covered it with plastic bags to keep it moist, so that it would remain malleable and hold its form. The finished piece was then fired in a kiln to harden it.

Perhaps mirroring the fate of many wild rabbits, Jenny prepared forms for firing by completing the ‘horrible’ task of cutting each rabbit in half using fishing line, scooping out the clay inside, then re-joining the halves. A small hole allowed air to escape during firing, so that the ceramic did not explode as it heated up.

I was working on my dining room table and so I had six sculptures of rabbits at various stages of being finished … and every time I came into the room they would almost leap off the table at me.

Focused on the rabbit’s impact on native Australian species, Jenny initially thought about directly evoking in the artwork Indigenous fauna like the fat-tailed dunnart (Sminthopsis crassicaudata) — a marsupial facing competition from introduced species — by applying its outline to the ceramic rabbit body.

However, as soon as she started making her rabbits, she realised that their form was so strong that any drawing or engraving would be a distraction.

Pollak also experimented with the number of rabbits in the sculpture. She first imagined that the piece might include hundreds of individuals, each with its own distinct pose and personality.

She envisaged filling a room with them, imagining the way in which a visitor entering such a space would be engulfed by a ghostly mass of rabbits, producing a sobering insight into the impact of the rabbits’ millions on the outside landscape.

In the end, practicality determined the final number of rabbit sculptures, as Jenny explains: 'They almost took over my house … there was no place left to eat on my table.'

It reached the shortlist for the sculpture category prize and was acquired by the National Museum of Australia in 2012. New World Order — Terra Australis was displayed in the Museum’s Old New Land gallery.

Installed at the National Museum, the sculpted rabbits of New World Order — Terra Australis stared through a sheet of thick glass set into one edge of their plinth.

The glass seemed to mark the limits of their territory, with the rabbits poised like sprinters, ready to surge forward with frightening pace and effect, as they did when they spread with astonishing speed across the Australian continent during the 19th century.

Explore more on Rabbits in Australia

Rabbits in Australia
Your stories