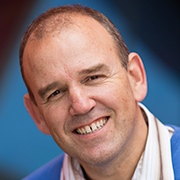 In 2021 the Museum will open a new gallery exploring the environmental history of Australia. It will explore the non-human elements of the Australian continent – its plants, animals, geographic features and weather patterns, and the way they influence and intersect with human society.

One of the major themes of the new gallery will be that the environment has its own agency and power, often beyond human control – cyclones, bushfires and droughts, for example.

Another powerful force is the saltwater crocodile. It is the largest of all living reptiles and belongs to a group of animals – the crocodilians – which have existed since the time of the dinosaurs. Its size and awesome power render humans who enter its environment totally defenceless.

The taxidermied crocodile, crated for transport to the Museum

To show how big a saltwater crocodile can grow, the Museum has acquired a taxidermied specimen to display in the new gallery. The pose of the crocodile shows it swimming, as it’s in the water that the crocodile is most powerful, killing people and other animals in underwater death rolls.

The animal came from the Koorana Crocodile Farm in Queensland. It is a large male estimated to be several decades old. Although details of the exact origins of the crocodile are unknown, it is most likely to have been captured in the early 1980s from the Ingham region.

When crocodile farms first started operating in the early 1980s, they built up their breeding stocks by removing ‘problem’ crocodiles from places like Cattle Creek, the Herbert River and Hinchinbrook Channel. Crocodile farms rely on their breeding programs, and because this particular crocodile had stopped breeding, it had to be euthanised.

The warehouse of South Pacific Taxidermy

After its death, the crocodile’s skull and skin were sent to Victorian taxidermy company South Pacific Taxidermy, to be prepared for display. Whereas most taxidermied animals only feature the skin of the animal, saltwater crocodiles have to include the skull because the skin is fused to the skull and virtually impossible to remove in one piece.

The Museum’s new display will give visitors an appreciation of the awesome power of these magnificent creatures, and reinforce why we should never enter waters where these ancient animals live. They are, without doubt, the top predators.