The story behind the Canning Stock Route project (part four)

We are learning from each other, learning along the way I'm learning not just about filming but culture side I'm learning how artists tell their stories through painting. They are really brave. They are telling the story for the whole of Australia. If they can do it, surely everyone can understand this history, 'cos there are two sides of the story. 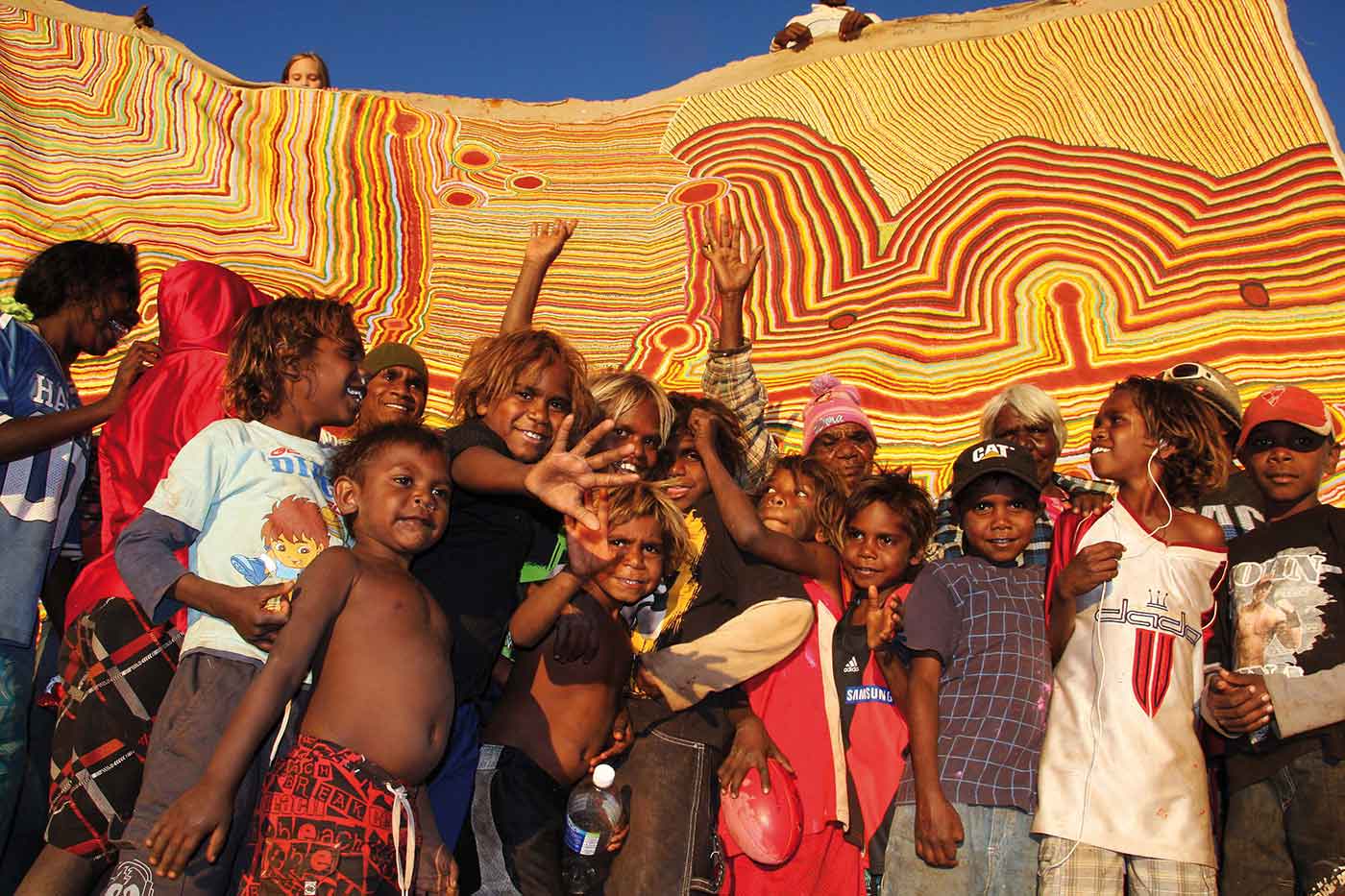 Martu Kids and artists in front of the painting Martumili Ngurra

The 'return to Country' trip of 2007 established a model that would be used throughout the project's life: a multi-disciplinary artistic approach, using diverse mediums, both traditional and contemporary.

The project's bush trips encouraged experimentation and a general sense of being engaged on an artistic adventure, both in Country and back in the communities.

The project's many community events provided artists with an opportunity to talk to family members and exchange ideas with them, to revisit the Country they had left in their youth, and to share their knowledge of Country, Jukurrpa and culture with the younger people working in the project team.

Artists energetically engaged with these young emerging professionals, keen to see them training as cultural ambassadors and leaders in facilitating project activities.

Artists and contributors were also buoyed by FORM's commitment to ensuring that all content generated by the project and their own intellectual cultural property — stories, photos and films — would be safely returned to art centre communities in 2011. [1] 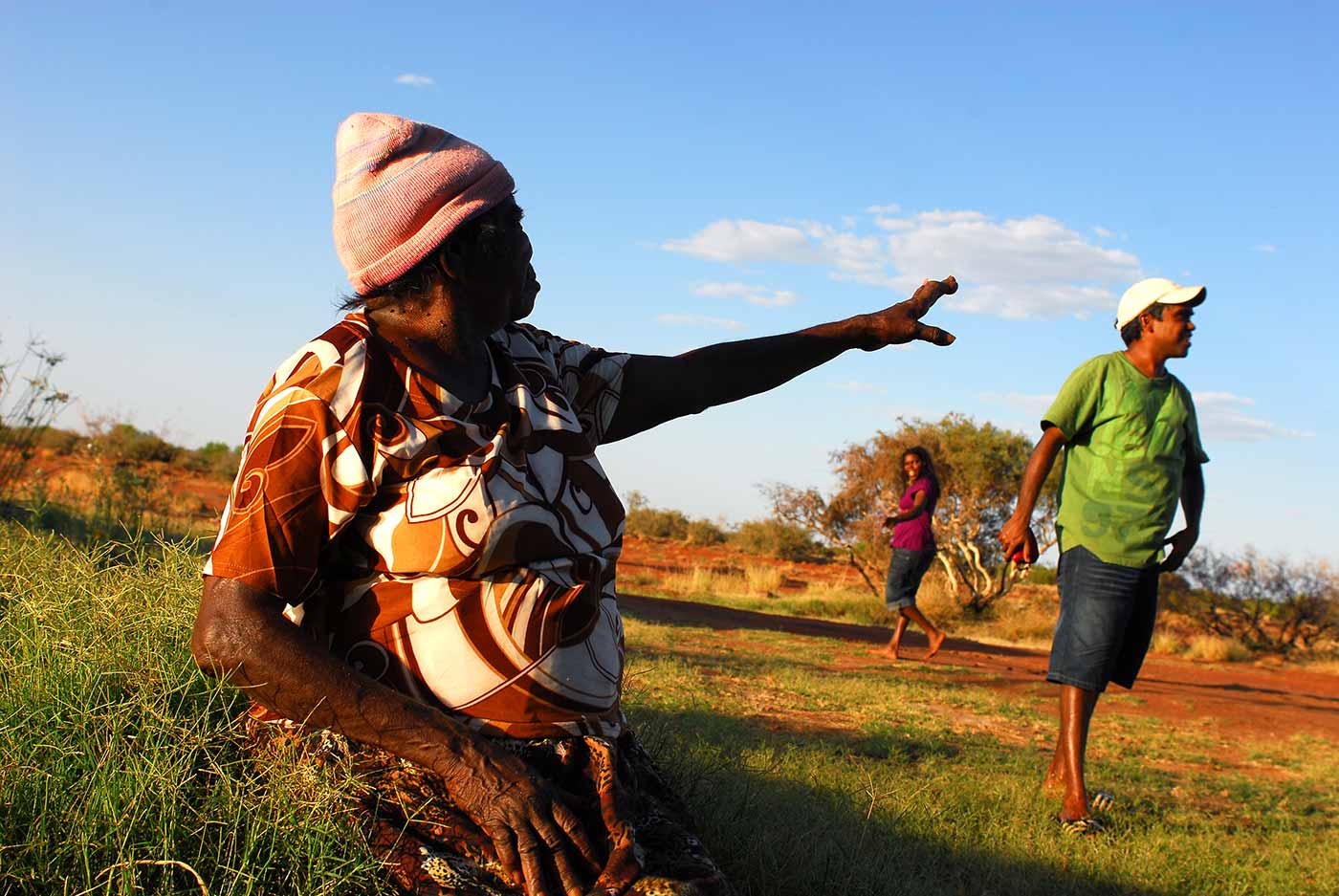 As the numbers of participants increased, the project expanded to accommodate the new contributors, each of whom breathed fresh life into even deeper layers of the story. Although this created complexity, it also established greater clarity about how the project should be designed and delivered.

Artist groups such as Ngurra, Martumili and Mangkaja asked the project team to facilitate specific bush trips and events. In these gatherings, artists shared their knowledge and their ways of seeing both Country and themselves with terrific warmth and generosity.

People loved to hear the names of artists from the other art centres and listen to their stories, often describing their connections to these people and places before going on to tell their own stories.

In April 2008 a big mob of Martumili artists returned to Kunawarritji (Well 33) and Kunkun for an extensive painting and weaving workshop, during which some of the works now in the Canning Stock Route collection were produced.

By now Martumili's artists were so motivated that they had gone on to produce other important paintings, individually and collaboratively, in Punmu and Parnngurr communities. The artists wanted these works to be with the other works and to go into the project's collection.

The Ngumpan workshop, which took place east of Fitzroy Crossing in late 2008, revolved around the intergenerational transfer of cultural knowledge, and was one of the most transformative events of the whole project. [2]

Senior Ngurra artist Ned Cox, who had led the very first bush trip, to Jilji Bore in May 2007, was also the instigator of this event.

Coordinated by Putuparri Tom Lawford, Ned and other senior men and women taught teenagers and children carving and weaving skills, and passed on the knowledge of important dances and body decoration to both young people and adults.

It was good for young ones and old people. Old people were happy because all the young ones been dancing and learning artefact making, karli [boomerangs], ngurti [coolamon] and mukurru [hitting sticks] and collecting materials for ceremony. They been passing down to their grandkids so they can carry on that dancing.

The Ngumpan workshop saw the revival of the dance for Kaningarra (Well 48). This dance had not been performed since the death of the site's custodian some 15 years earlier. Performed here by Pampirla Hansen Boxer, it elicited a very emotional reception.

1. FORM will return all Canning Stock Route Project content and materials to the nine art centre enterprises and their partner organisations in 2011. This will provide access to the material for artists, contributors and their families. The Canning Stock Route collection will be held in perpetuity by the National Museum of Australia, with public access as stipulated by community custodians.

2. This workshop was organised by KALACC and the Yiriman Project.