The story behind the Canning Stock Route project (part three)

Being in Country is a potent, creative impetus for Aboriginal artists; this principle became one of the foundation stones of the Canning Stock Route Project. Through the prism of contemporary art, a previously untold history began to emerge. Community visits were undertaken, and artists' workshops were held in 'bush studios' across the Western Desert.

These featured a range of artistic endeavours, such as carving, weaving, painting, ceremonial dancing and singing, film and photography, but storytelling was the constant thread that bound them all together.

I paint my Country, the waterholes, and I give the name for the water, in the places where we used to walk. Painting brings my Country up closer, true; it brings it closer to me. 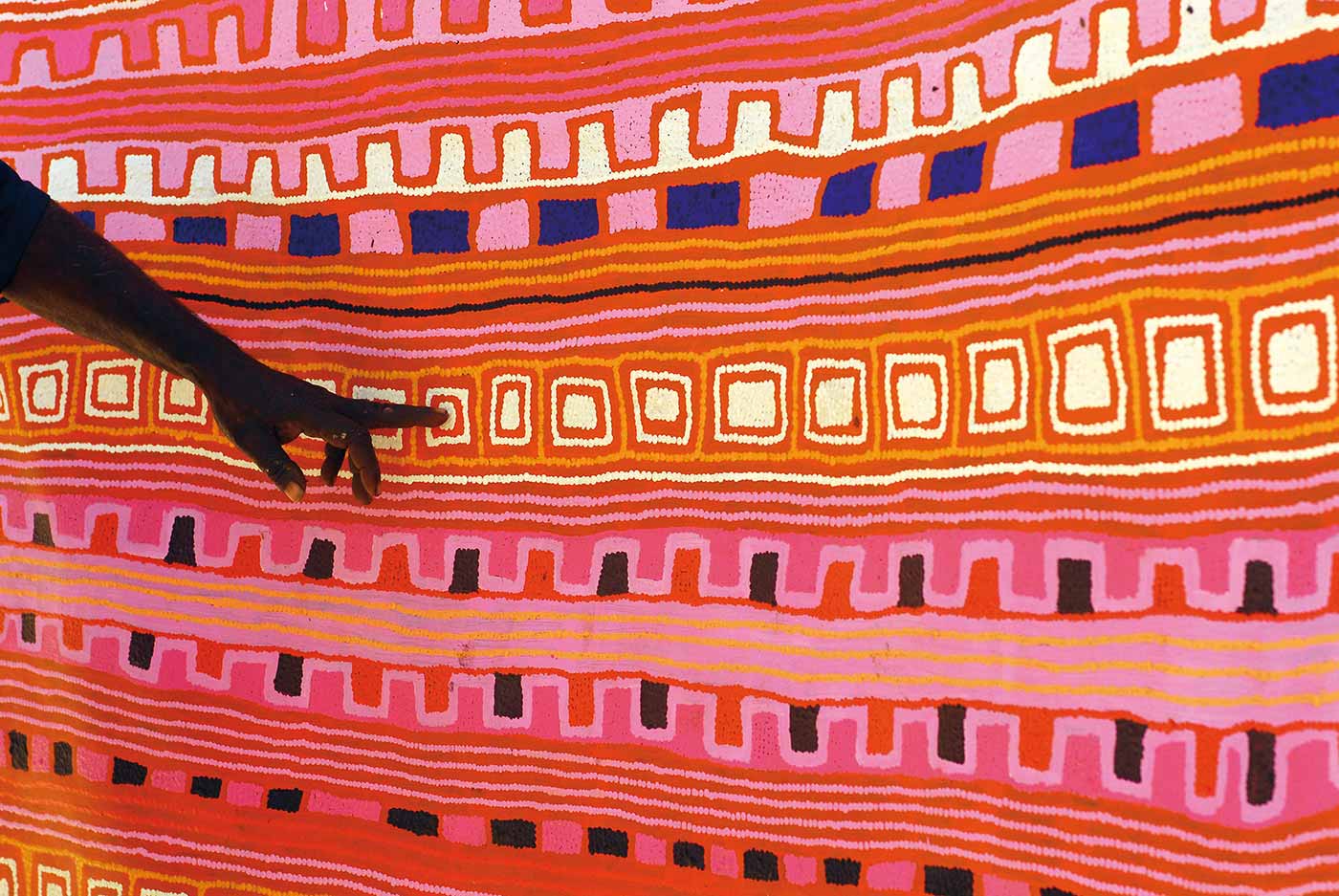 The centrepiece of the project's eight-and-a-half-month-long program of bush work was the epic six-week, 1850-kilometre desert journey from Wiluna to Billiluna in July–August 2007. [2] It was a dynamic, sometimes unpredictable trip. Artists from almost all the aforementioned art centres joined or left the convoy at various points along the stock route. [3]

Central to this bush trip were four major artists' camps: these were opportunities for the convoy to pause so that artists could paint and the team could record interviews.

The character of each camp was distinct, with the mood and the energy at each echoing the terrain and the mix of people present: the lush, peaceful space of Durba Springs; the intensity and hyperactivity of Kilykily (Well 36); the calm of Kujuwarri (Well 46); and the extraordinary gathering of people at Nyarna (Lake Stretch).

The combination of diverse environments and different generations of artists produced a body of work that reflected the vitality of people's relationships with Country and with each other. 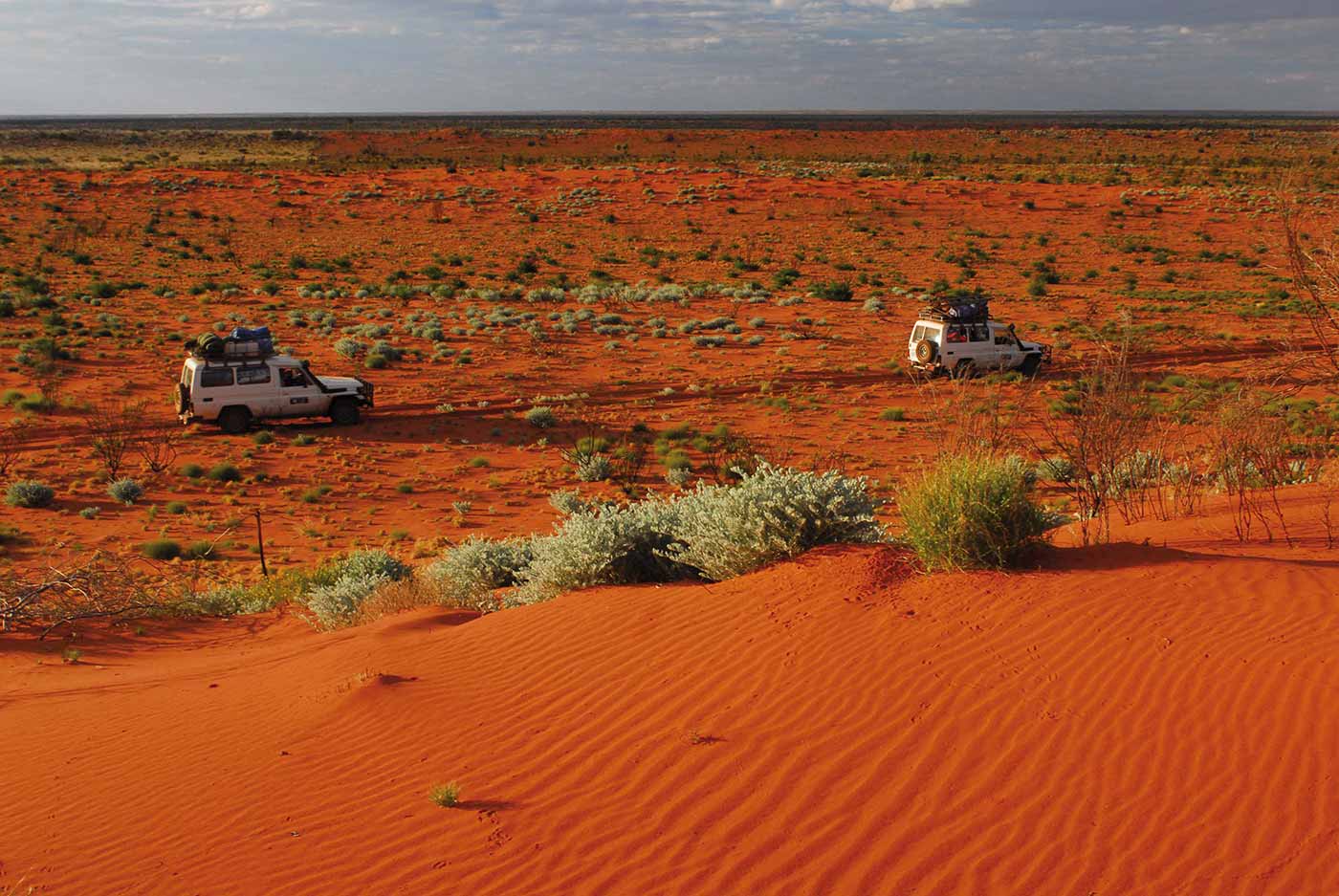 Vehicle convoy between wells 28 and 29

The largest of the camps involved six of the nine art centre groups and was held at Kilykily (Well 36) in Martu Country. The artists and their family groups manifested a passion for painting in that Country that transformed the project's entire shape and essence.

Although the trip had been planned for nine months, it was unclear, even as the main convoy arrived at Kunawarritji (Well 33) from Wiluna, precisely how many people would be attending. Artists from a distant circle of communities began to arrive; they came in buses, charter planes and four-wheel drives.

A 14-vehicle convoy eventually embarked on the single, sandy track to Well 36. Charismatic Martu statesman, the late Jeffrey James, led us to a site he had selected for the workshop. After hours of rough driving up and down steep sandhills, Mr James's front car was several sandhills ahead of the main body.

With the vehicles lacking radio contact, some took wrong turns and got bogged. However, our large mob, comprising artists, cultural leaders, volunteers and the project team, eventually arrived, exhausted, in the dark. 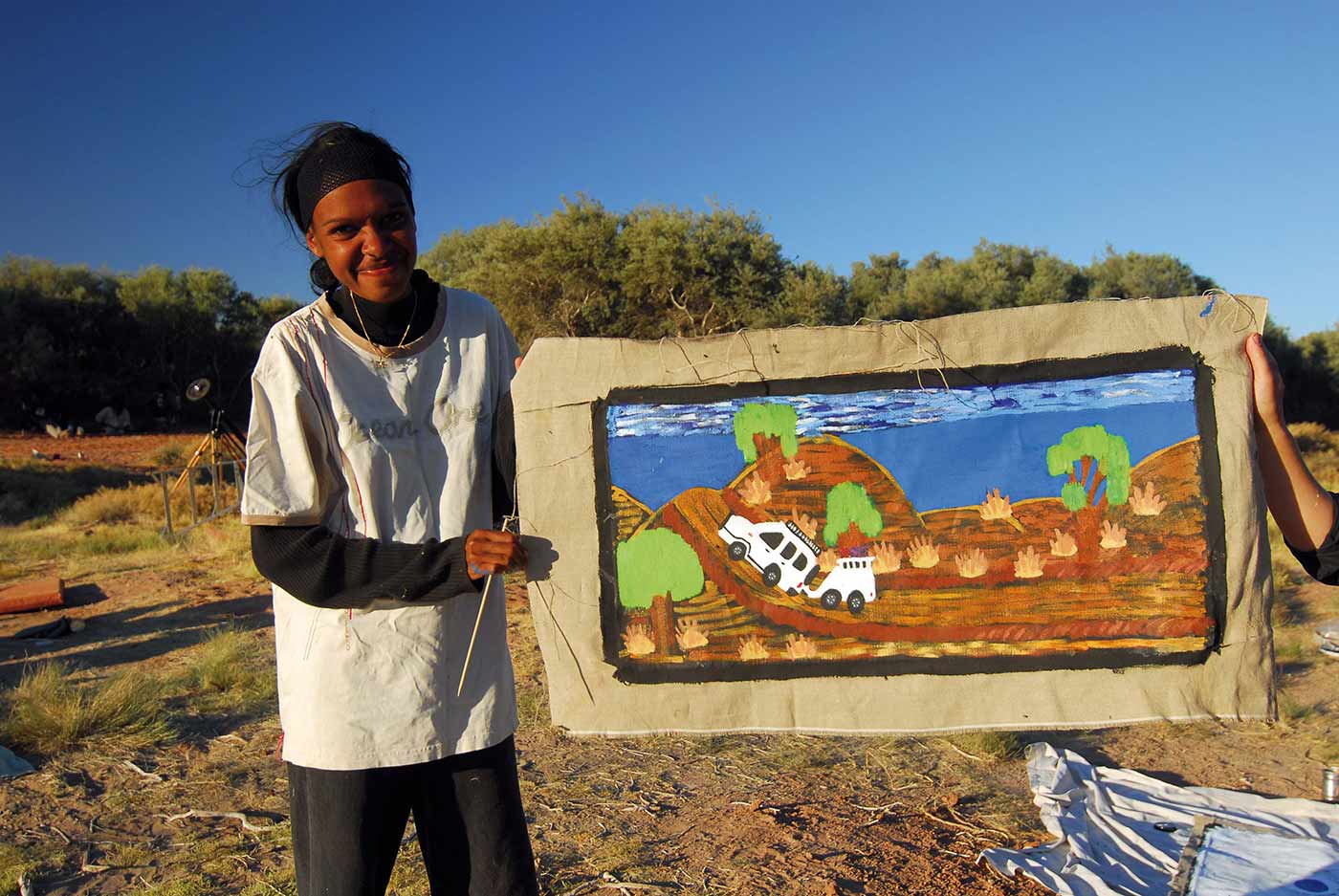 Hayley Atkins with her painting Me, Milly and Gabrielle Got Bogged, painted at Well 36

The Well 36 workshop unfolded in the sublime tali (sandhill) Country of the Great Sandy Desert. At dawn that first morning, a camp of over 70 people awoke in a clearing among the ti-trees, with wild reeds surrounding the shallow well. Everyone formed a large circle, and the meeting got underway.

It was conducted in various languages — English, Martu Wangka, Manyjilyjarra, Kukatja and Wangkajunga. The Martu spoke for their Country and introductions, both formal and informal, were made. Artists from the other language groups then stepped forward to describe their family associations, indicate the direction of their Country, and acknowledge the relationships of their ancestors to Country.

It was a reunion between families and a reaffirmation of Country. For some, it was their first time in this Country, and for others, it would be their last.

Road signs which read 'Slow down, artists at work!' were posted on the stock route at either end of the camp. A wild kaleidoscope of painting-strewn tarpaulins was laid out on the earth, the work of artists in bright beanies, skirts, shirts and jumpers, accompanied by a pack of dogs and the project's film production crew. It was an astonishing sight.

For five electric days the artists painted, individually and collectively; they socialised and discussed their work; the action was filmed, and an array of very personal stories was recorded.

From Well 36, the groups went home their various ways, with Ngurra, Papunya Tula and Tjukurba Gallery artists continuing on the journey north to Nyarna (Lake Stretch), where they were met again by Mangkaja, Balgo and Paruku Indigenous Protected Area artists, and lots of curious Mulan and Billiluna residents.

Co-curator Hayley Atkins, from Martumili Artists, also joined that convoy. She catalogued works of art, interviewed and recorded artists' stories, translated for project team members, worked with artists from the other centres — and learned to paint, producing three works of her own.

At journey's end, Hayley stood grinning on the shores of Nyarna (Lake Stretch) near Billiluna, having helped to lay out a collection of 130 canvases.

The wind had picked up and the canvases wanted to take flight, so they were held down with leftover supplies: tins of corn, baked beans and spaghetti.

The paintings' dazzling palette seemed magnified by the mirror of the lake's edge, with the canvases lying flat on the ground, facing the sky, just as they had been made.

Hayley and the team looked on as a crowd of artists and their visiting family members from Billiluna, Balgo, Mulan, Wangkatjungka, Kupartiya and Fitzroy Crossing walked slowly around the paintings.

The works were organised by artist groups, with each collective showing off its distinctive palettes, styles and motifs.

Delighted shrieks and cheeky laughs could be heard as artists, speaking various languages, identified and discussed their own and others' works.

This was the first unveiling of the paintings that would grow into the Canning Stock Route collection. The first exhibition of this collection was laid out on the earth, by a lake at the edge of the desert, with Alfred Canning's last well, number 51, just a few kilometres to the south.

2. The project's very first 'return to Country' trip had been a carving workshop at Jilji Bore, north-west of the stock route, in May 2007. A collective drawn from Ngurra Artists, including George Tuckerbox, Ned Cox, Rosie Goodjie, Jukuja Nora Tjookootja and Nyangkarni Penny K-Lyons, carved up a woodchip storm, working each day from first light to sunset making coolamons, shields, digging-sticks and woven yakapiri (sandals).

3. Members of Kayili Artists and Yulparija Artists were unable to make this trip. The project team visited their communities at later dates.