The origins of Emily's subsequent works are to be found in these early batiks and canvases, which represent her first body of work using introduced materials. 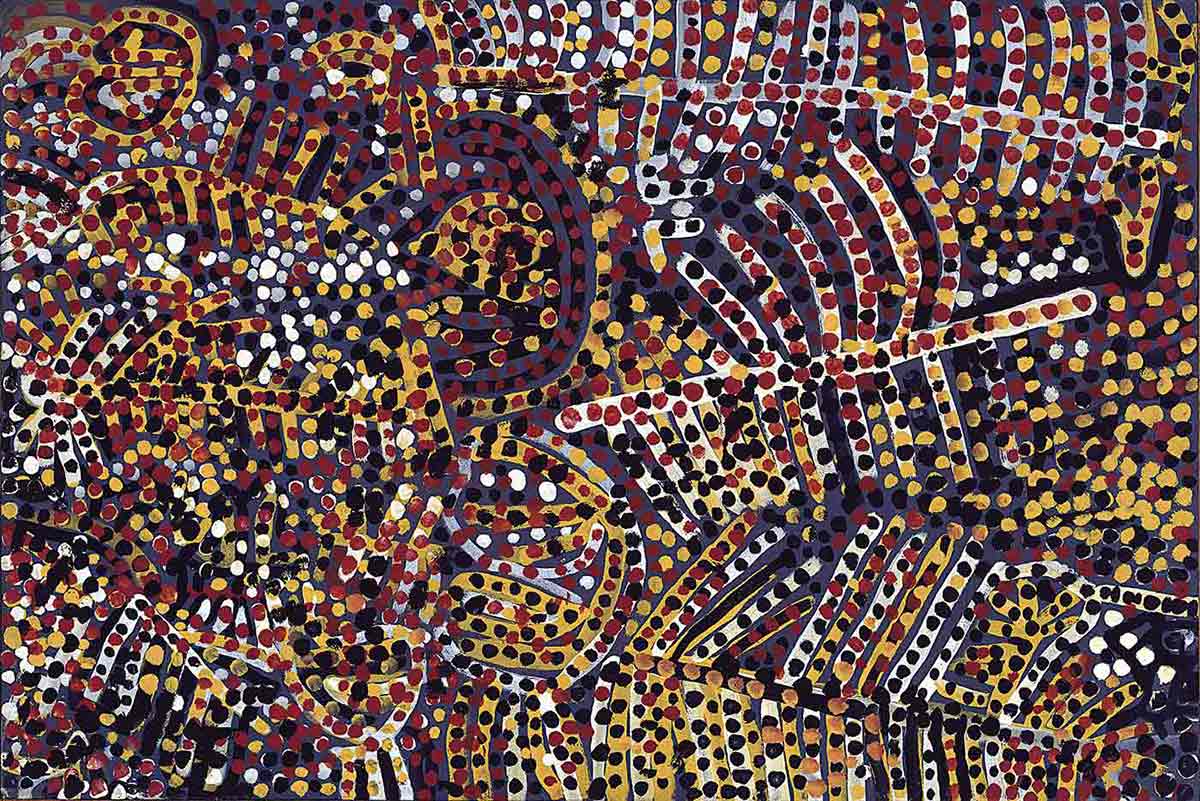 After decades of mark-making on the body and in the sand, Emily's cultural narratives found expression in the batik medium from 1977 to 1988, followed by painting on canvas until the end of her life, eight years later. Over the summer of 1988–89, she painted Emu Woman, her first work on canvas, which caused an overnight sensation in the art world.

Visual links connecting these batiks with her later canvases include linear patterns related to body markings, plant and animal forms, the under-tracking of the root systems of plants, the interplay of dots and the overall patterning. By 1990 her use of pictographic elements, such as animal and plant forms, that inhabit these busy surfaces was rapidly reduced to fields of dots.

Emily's batiks are a transition between body painting and painting on canvas. They are exhibited here on boards rather than draped, as textiles are usually shown, to discourage a view of them as craft. For Emily, the material upon which marks are made is immaterial. Whether the surface is sand, silk, skin or canvas, it is the cultural power of the mark and its reference to her Country of Alhalkere with its ancestral connections that remain paramount.

This work is acclaimed as Emily's first painting on canvas. As part of the first community-wide painting project conducted at Utopia, the Alice Springs-based Central Australian Aboriginal Media Association (CAAMA) delivered 100 blank canvases and paint to Utopia in late 1988. A few weeks later, 81 completed canvases were collected. Among these was Emu Woman. It caused instant excitement in the art world and was acquired for the Robert Holmes à Court collection. Its innovative exploration of 'dotting' heralded a profound departure from the so-called 'dot and circle' style of the then male-dominated desert art movement. Freed from the restrictive medium of batik, Emily discovered that painting enabled her naturally expansive and gestural style to flourish.

Plants and seeds referred to in this work belong to Emily's Dreaming, which she kept alive in her paintings and through song and dance. This work shows designs that mimic the lines and contours of body painting and the marks made on women's breasts for ceremony, enacted in homage to the Emu ancestor.