'Kame [yam seed], that's me.' This was said as Kngwarreye cupped her hands together in the manner of intekwe, the pod that holds the kame seeds.

The characteristic structures of batik-making that dominate the surface of Emily's first paintings on canvas give way to large fields of dots by the 1990s. 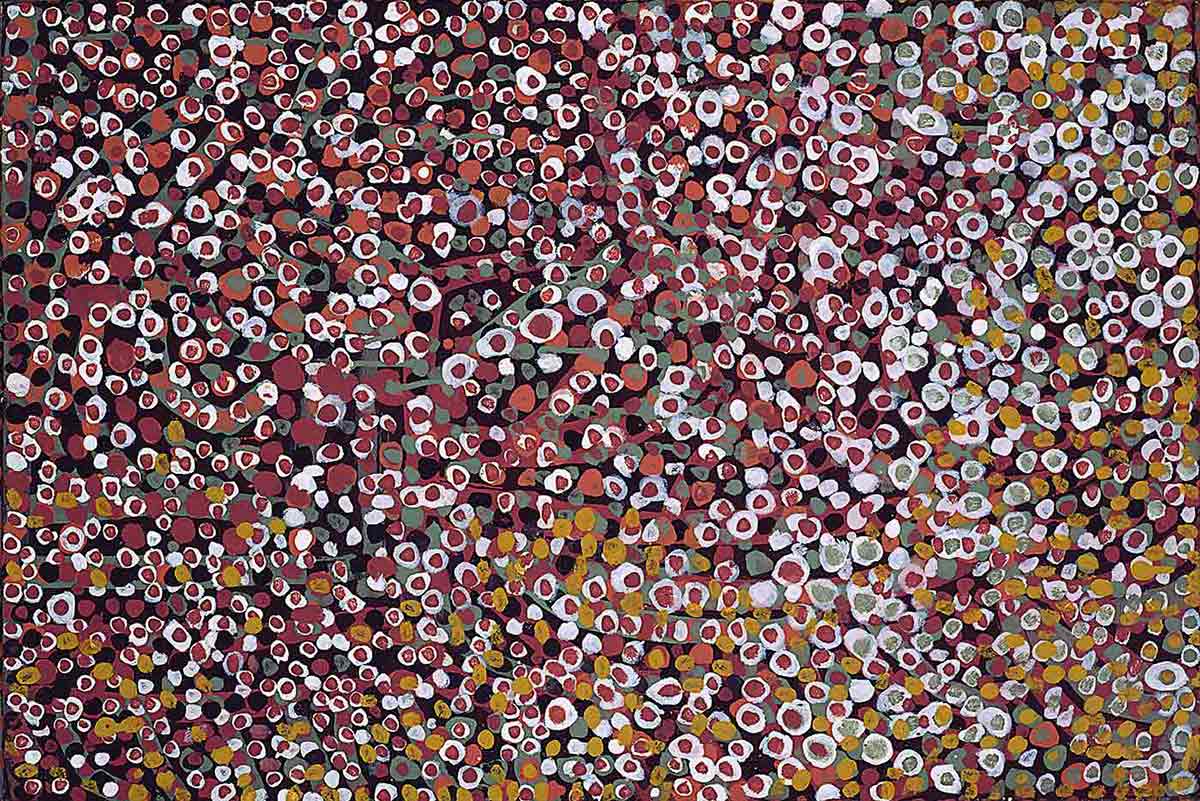 Dots float freely, filling large canvases and veiling traceries of lines that are fully or partially obscured below the surface. These linear patterns, or under-tracking, reveal links between places and people, and simultaneously refer to ancestral journeys. At other times they are described as root systems.

Dots are an identifiable element of contemporary desert art, originating in ritual body painting and ground designs. No one, however, has so innovatively exploited the dot in such combinations and to greater effect than Emily, who surpasses the pointillists and the impressionists in this regard.

Her dots vary from fine to coarse, from single to triple, and in concert they evoke the rhythm of dancing, the dynamism of growth and the life force of nature as windborne seeds scatter across the land. The changing seasons and the night skies can be sensed in the expansive and shifting tonalities of Emily's palette.

This distinctive series of paintings was created in mid-1989, not long after Emily first began working on canvas. James Mollison, then director of the National Gallery of Australia, attempted to acquire these as a suite when he first saw them at the Central Australian Aboriginal Media Association (CAAMA) shop in Alice Springs, but instead they were sold separately.

In these works Mollison saw the beginnings of Emily's practices of working in series, innovative dotting and producing works that are simultaneously abstract and representational. They have been reassembled here to reflect her original intent.

While they may appear abstract, the countless dots of red, black and white also represent the seeds of plants from the desert region where Emily lived. The works offer us some insight into the development of Emily's uninhibited and exploratory dotting techniques, and her unique approach to painting.