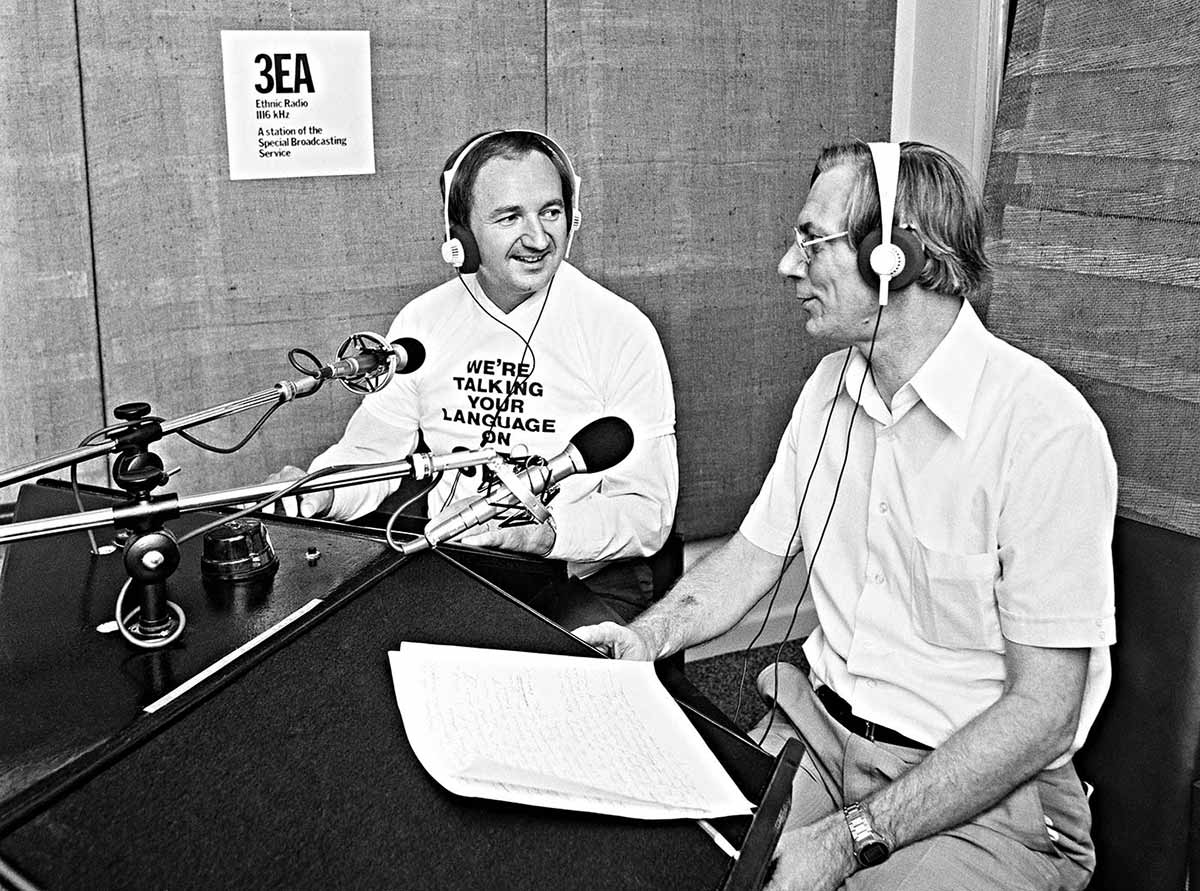 As community-driven stations began to gain audiences in Australia, the newly elected Whitlam Labor government was also encouraging the ABC to establish public access stations. This brought about the opening in 1975 of the youth-oriented 2JJ in Sydney and the non-English speaking community-oriented 3ZZ in Melbourne.

With the government passing a series of major social policy changes, the Minister for Immigration Al Grassby was concerned that many newer immigrants would not have the language skills to understand the changes.

He pressed the government into commissioning the ABC to create stations 2EA (Sydney) and 3EA (Melbourne) to broadcast information about the new Medibank universal health care system.

The stations started broadcasting in seven languages in June 1975. Initially they had a 12-week trial period but because of strong community demand, this was continued through a series of six-month extensions.

The Whitlam government was dismissed in November 1975 and the new coalition government under Malcolm Fraser was elected the following month. The Fraser government formed the Consultative Committee on Ethnic Broadcasting (CCEB) in May 1976 and the popularity of the two EA stations and 3ZZ greatly influenced its report. 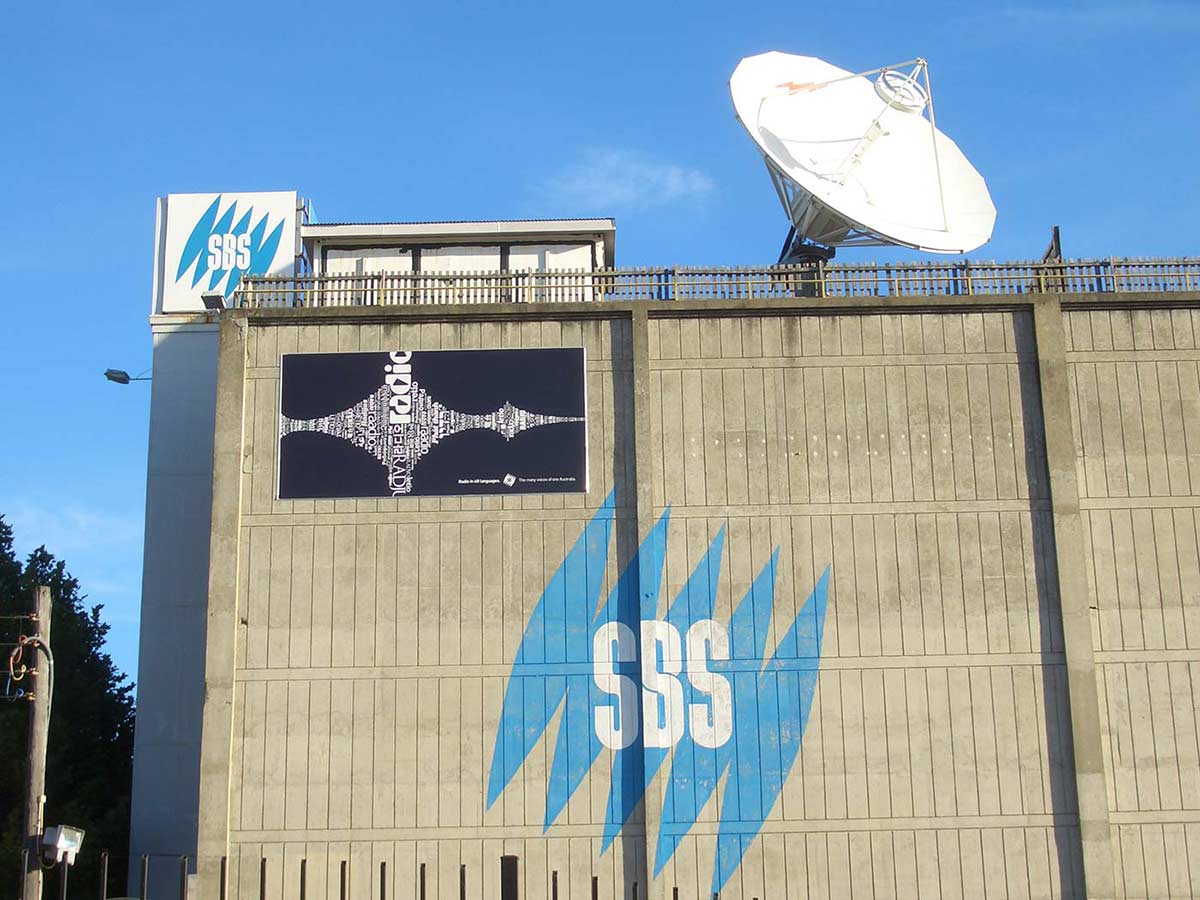 The ‘Mercator’ logo on SBS’s head office in Sydney

The government, on the recommendation of the CCEB, offered the EA stations to the ABC but the corporation was reluctant to take control of them. So, in November 1977, SBS was created by an amendment to the Broadcasting and Television Act 1942 to manage the government’s ethnic broadcasting projects.

Between 1945 and 1975 Australia’s population almost doubled due to the government’s post-war immigration drive. By the 1960s many new immigrants from non-English speaking backgrounds were asking for more access to broadcasting. A number of community-run radio stations were established in the early 1970s.

The popularity of these and the government-sponsored 2EA and 3EA non-English speaking stations encouraged the government in 1978 to establish the Special Broadcasting Service (SBS) to manage multicultural radio services. This led to the start of SBS Television in 1980.

How often do our television screens reflect anything like the variety of migrant groups encountered in a real-life stroll through out city streets, or particularly, near city suburbs?

After the Second World War, Australia embarked on one of the largest immigration programs ever undertaken in the world.

The country’s population doubled to almost 14 million between 1945 and 1975 and for the first time the government sponsored immigrants from non-Anglo backgrounds.

By the 1960s many of these non-English speaking communities were appealing for more access to the radio airwaves.

In 1964 the Australian Broadcasting Control Board (ABCB) approved that up to 10 per cent of radio broadcasting could be in non-English languages.

Commercial stations took advantage of this to sell airtime to the larger ethnic communities, specifically Greek and Italian.

However, as the 1960s progressed commercial radio saw more financial advantage in producing advertisement-heavy American-style programming, and the ethnic sector lost much of its air time.

Public broadcasting differed from the government-sponsored ABC and the commercial stations in that it involved communities in its management and programming. The community in these cases were not only ethnic groups but Aboriginal, religious or educational associations.

By 1975 there were a dozen public stations broadcasting in Australia.

In March 1979 the federal government established the Ethnic Television Review Panel (ETRP). The ETRP took up one of the recommendations expressed in the influential 1978 Review of the Post-Arrival Programs and Services for Migrants (the Galbally Report), which stressed that Australia should work towards becoming a multicultural society.

The ETRP endorsed a permanent television service to promote multiculturalism through entertainment rather than just education. The ABC was invited to tender for the service, but its pitch was deemed too expensive and not sufficiently focused on the multicultural objectives of the project.

As a result, the government decided to establish an independent multicultural television body. On 24 October 1980 Channel 0/28, later known as SBS TV, began broadcasting in Sydney and Melbourne.

By 1985 the new multicultural television station was serving all Australia’s capital cities, allowing many Australian households to watch programs in non-English languages for the first time. It was a development that brought home Australia’s rapid journey to multiculturalism over the previous 40 years.

The Special Broadcasting Service is the most diverse broadcaster in the world, presenting programs in 70 languages on radio and more than 60 on television and online. According to a 2009 Newspoll, about six million Australians watch SBS each week.

Of these, 91 per cent believe it is important that SBS be available to provide an alternative to commercial television and 90 per cent agreed that SBS (TV, radio and online) plays an important role in Australia’s culturally diverse society.

Cartoon of federal Labor politician Al GrassbyPolitical cartoon of Al Grassby. The caricature is in colour and has been signed by Ward O'Neill in the bottom left hand corner.