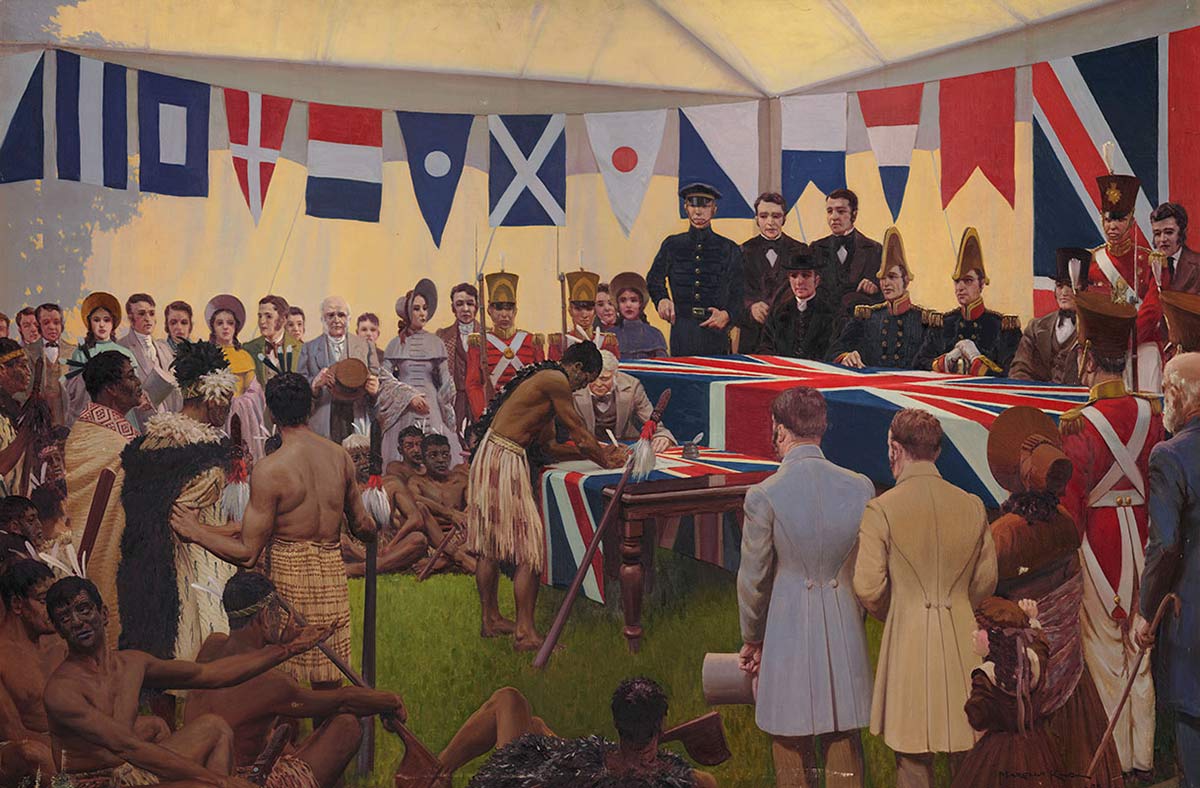 The signing of the Treaty of Waitangi, February 6th, 1840 by Marcus King

On 1 July 1841 the islands of New Zealand were separated from the Colony of New South Wales and made a colony in their own right.

This ended more than 50 years of confusion over the relationship between the islands and the Australian colony.

… Governor in Chief of Our Territory called New South Wales extending from the Northern Cape or Extremity of the Coast called Cape York … to the Southern Extremity of the said Territory of New South Wales, or South Cape … and of all the Country Inland to the Westward as far as the One hundred and Thirty fifth Degree of East Longitude … including all the Islands adjacent in the Pacific Ocean.

Australia and New Zealand have always had a close relationship. But for a few months in 1840–41 our connection was even closer – New Zealand was formally made an extension of the New South Wales colony.

However, before this official relationship, the two British outposts had had a decades-long association. It began in 1788 with a sweeping proclamation from NSW Governor Arthur Phillip defining the boundaries of the NSW colony.

This extended from Cape York in Queensland to South Cape in Tasmania, encompassing all land west to 135 degrees longitude (just east of Alice Springs) and ‘including all the islands adjacent in the Pacific Ocean’.

For Phillip and his successors, this vague definition incorporated New Zealand. As a result, it became a de facto part of NSW territory.

Governors encouraged economic and cultural activities across the Tasman. This included supporting the Church Missionary Society’s presence there, and appointing New Zealand’s first Justice of the Peace, Thomas Kendall, in 1814.

However, there was still debate over the legal status of New Zealand. For example, did New South Wales’ law apply to crimes committed across the Tasman Sea.

In 1831 Captain John Stewart of the brig Elizabeth transported and collaborated with a Maori war party in massacring a rival group on the Banks Peninsula. Stewart and his crew escaped punishment despite successive attempts to bring them before English courts.

This highlighted the difficulty in applying the law, and forced the government to reconsider New Zealand’s position. The Colonial Secretary Lord Goderich was appalled.

A growing humanitarian movement was also concerned about the fate of the Maori people following a huge influx of British settlers who were hungry for land.

The time had come for the Crown to take more direct control. In 1838 a House of Lords committee recommended ‘the Extension of the Colonial Possessions of the Crown…'

The colony would now include:

any territory which is or may be acquired in sovereignty by Her Majesty … within that group of Islands in the Pacific Ocean, commonly called New Zealand.

This set the stage for the newly appointed consul, Captain William Hobson of the Royal Navy, to obtain sovereignty of the islands with Maori consent.

However before Hobson had even arrived in New Zealand or spoken to any Maori chiefs, he was also appointed the country’s Lieutenant Governor.

On his way there, Hobson visited NSW Governor Sir George Gipps, who swore him into his new role and proclaimed that the jurisdiction of the NSW governor now officially extended to New Zealand.

On 6 February 1840 more than 40 Maori chiefs signed the Treaty of Waitangi. This laid the foundation for the later proclamation of British sovereignty over New Zealand on 21 May 1840.

Less than a month later, on 16 June 1840, the Legislative Council of New South Wales passed an Act extending the colony’s laws to New Zealand, as well as establishing courts and customs duties.

However, this was only ever intended to be a temporary arrangement. The Charter for Erecting the Colony of New Zealand was issued on 16 November 1840. It stipulated that New Zealand would cease to be part of New South Wales on 1 July 1841.

New Zealand and the Australian Constitution

In the 1890s New Zealand was invited to join the forthcoming Federation of Australia. New Zealand Premier Richard Seddon called a Royal Commission in 1900.

The commission reported that:

The stretch of some twelve hundred miles of sea… is a weighty argument against New Zealand joining the Commonwealth.