About 12,000 years ago: Sea level rises, separating Tasmania from the mainland 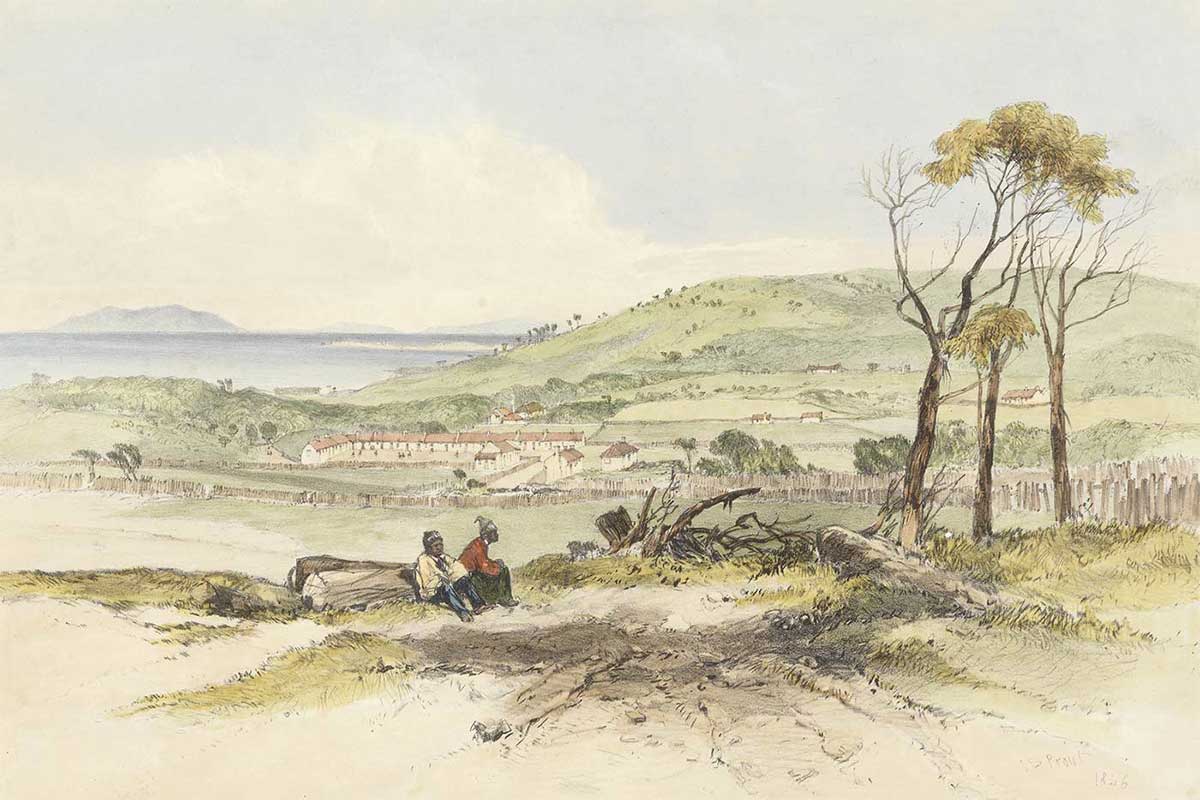 Residence of the Aborigines, Flinders Island by John Skinner Prout

Bass Strait was not always a strait. It used to be a plain populated by Indigenous peoples who moved back and forth between what we now call Victoria and Tasmania.

The first humans arrived in Tasmania around 40,000 years ago. About 30,000 years ago an ice age began, which caused sea levels to drop about 120 metres and created a continuous land mass that stretched between Papua New Guinea and Tasmania.

When the ice melted – a process estimated to have taken 6,000 years – Bass Strait formed and became an almost impassable barrier by about 12,000 years ago.

Iain Davidson and David Roberts, ‘14 000 BP – On Being Alone: The Isolation of Tasmania’:

They were alone for five hundred generations, knowing no other people in the world, living with the knowledge and beliefs derived from those they had known before the sea surrounded them. 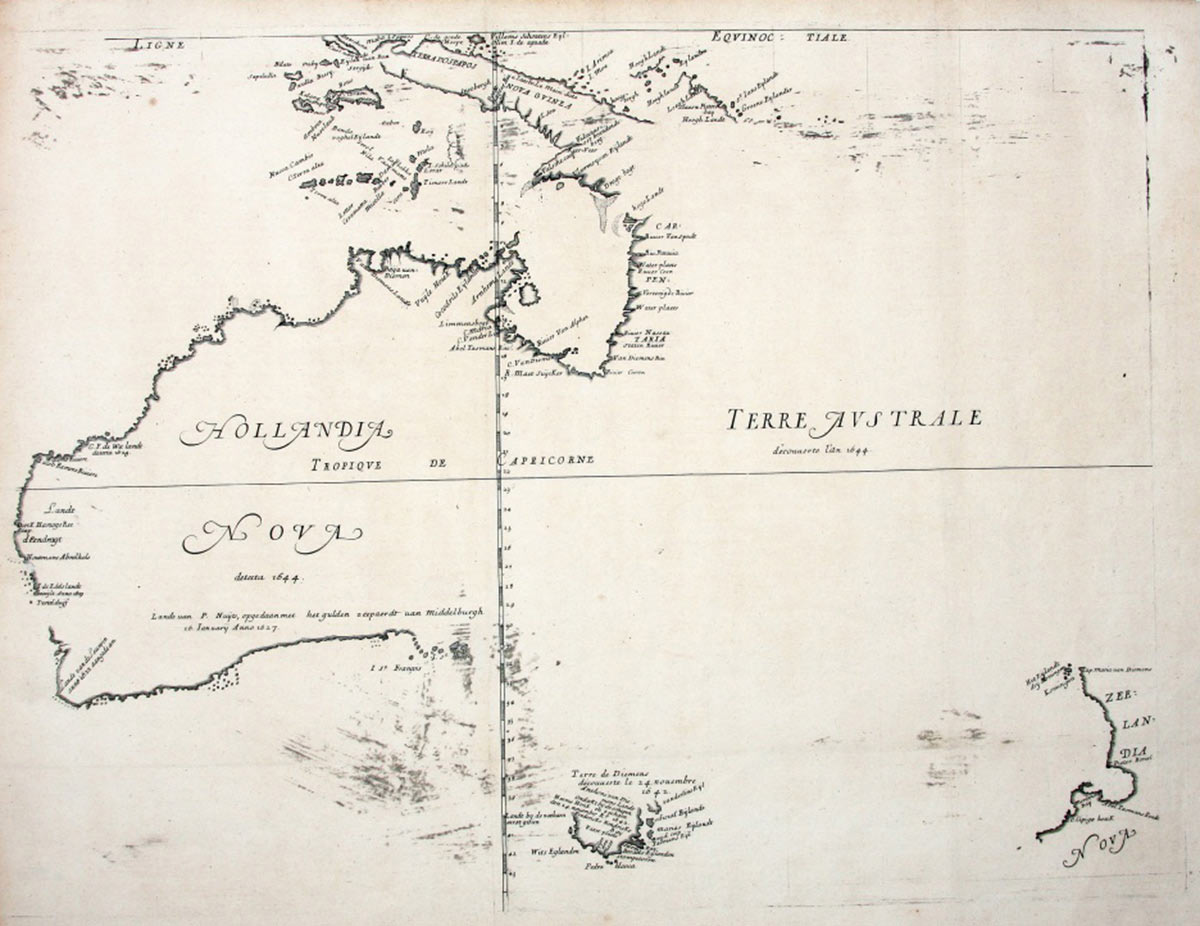 Tasmania was, and continues to be, known as lutrawita and trowunna by First Nations peoples from the region. Trowunna (Tasmania) is geographically divided into nine First Nations language groups.

The clashes between the original inhabitants and white settlers were amongst the worst in the country, leading to the infamous Black Line in 1830, which was an attempt to drive two of the tribes from their lands and corral them on the Tasman Peninsula.

While the Black Line proved to be a fiasco, it unsettled the Aboriginal population enough that they agreed to be resettled on Flinders Island in Bass Strait. This in turn led to the widespread, but erroneous, belief by the 1870s that Tasmania’s Aboriginal people had died out.

Settler Tasmanians refused to acknowledge that First Nations culture survived through the children of First Nations women and white men. These were largely descendants of women who married or lived with sealers and who lived primarily on the islands of the Furneaux group in Bass Strait.

This lack of recognition had an impact in the latter half of the 20th century when First Nations people who ‘looked white’ began political agitation for recognition of their Indigeneity and land rights.

Prior to Matthew Flinders coining the name ‘Australia’, the landmass created by the retreat of the ice had been called different names by different European explorers.

During the 1600s European explorers gave versions of this name to islands discovered in the Pacific.

The Dutch, whose ships frequently came to grief on the west coast while sailing to Batavia (now Jakarta), called the continent New Holland. Abel Tasman, who mapped and claimed parts of Tasmania in the 1640s, named the island Van Diemen’s Land to honour the Governor of the Dutch East Indies.

In 1770 Lieutenant Hicks was the first on board HMB Endeavour to sight the continent’s east coast. Captain Cook named Point Hicks in present-day Victoria after him and turned north, missing Tasmania.

In mapping the east coast of the mainland, Cook helped establish Britain’s claim to the eastern half of the continent, and identified Botany Bay as the site for a colony.

George Bass left Sydney in an offpen boat in December 1797 to explore the southeast coast of Australia and reached Western Port in Victoria. On his return to Sydney, he reported his conviction that a strait existed, and was instructed to return for conclusive proof.

Bass and Flinders sailed from Sydney on the Norfolk on 7 October 1798 and returned three months later having successfully circumnavigated Tasmania.

While Bass returned to England, Flinders continued his exploratory work and became the first European to circumnavigate the mainland, with the assistance of Bungaree, an Aboriginal man from Broken Bay north of Sydney. In his published journals, Flinders put forward the case for naming the continent Australia. 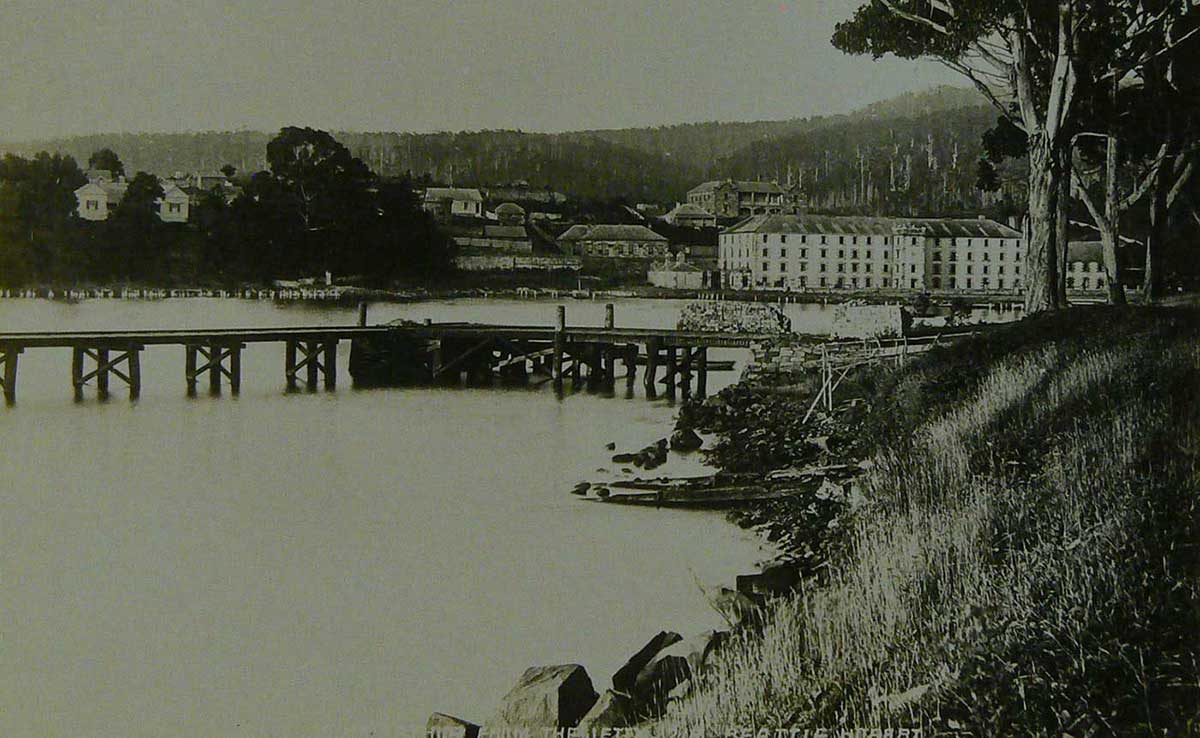 Once it was known to be a separate island, the British saw Van Diemen’s Land as being vulnerable to the territorial claims of other nations.

In 1803 the Governor of New South Wales, Philip Gidley King, anxious to pre-empt the French, sent 49 people under the command of Lieutenant John Bowen to establish a settlement in the Derwent estuary.

The following year, David Collins, who had been appointed Lieutenant Governor of Van Diemen’s Land, arrived in the Derwent from England with 430 people. His settlement became Hobart.

Small and remote, Van Diemen’s Land would soon become a secondary punishment site for convicts who had reoffended after their arrival in New South Wales or were not amenable to control. The geography of the selected site at Port Arthur on the Tasman Peninsula was exceptionally well suited to its role.

The history of Van Diemen’s Land as a convict island dogged its reputation, and after transportation ceased in 1853 the island’s name was changed to Tasmania.

The island’s cool climate, plentiful rainfall and fertile soils offered settlers a closer approximation to the homes they were leaving in the British Isles, and in the 19th and early 20th centuries many British civil servants posted in Asia came to regard Tasmania as having the ideal climate in which to retire.

However, Tasmania’s population has always been small and its economy has been hampered as a result.

During negotiations in the lead up to Federation, Tasmania was concerned that the larger mainland states would have more power. So it negotiated a deal that allowed states to retain three quarters of the income generated from tariffs on imports – a significant source of income for the island.

Being an island, Tasmania is sometimes overlooked by mainlanders. The most notorious official instance of this forgetfulness was in 1982 when Tasmania was left off the map at the Commonwealth Games opening ceremony in Brisbane.

At the 2014 Commonwealth Games in Glasgow, the swimming team’s costume also featured a map in its design, and again, the island state was not shown.