1975: ‘Life. Be in it.’, one of Australia’s most recognisable health promotion campaigns, launches in Victoria 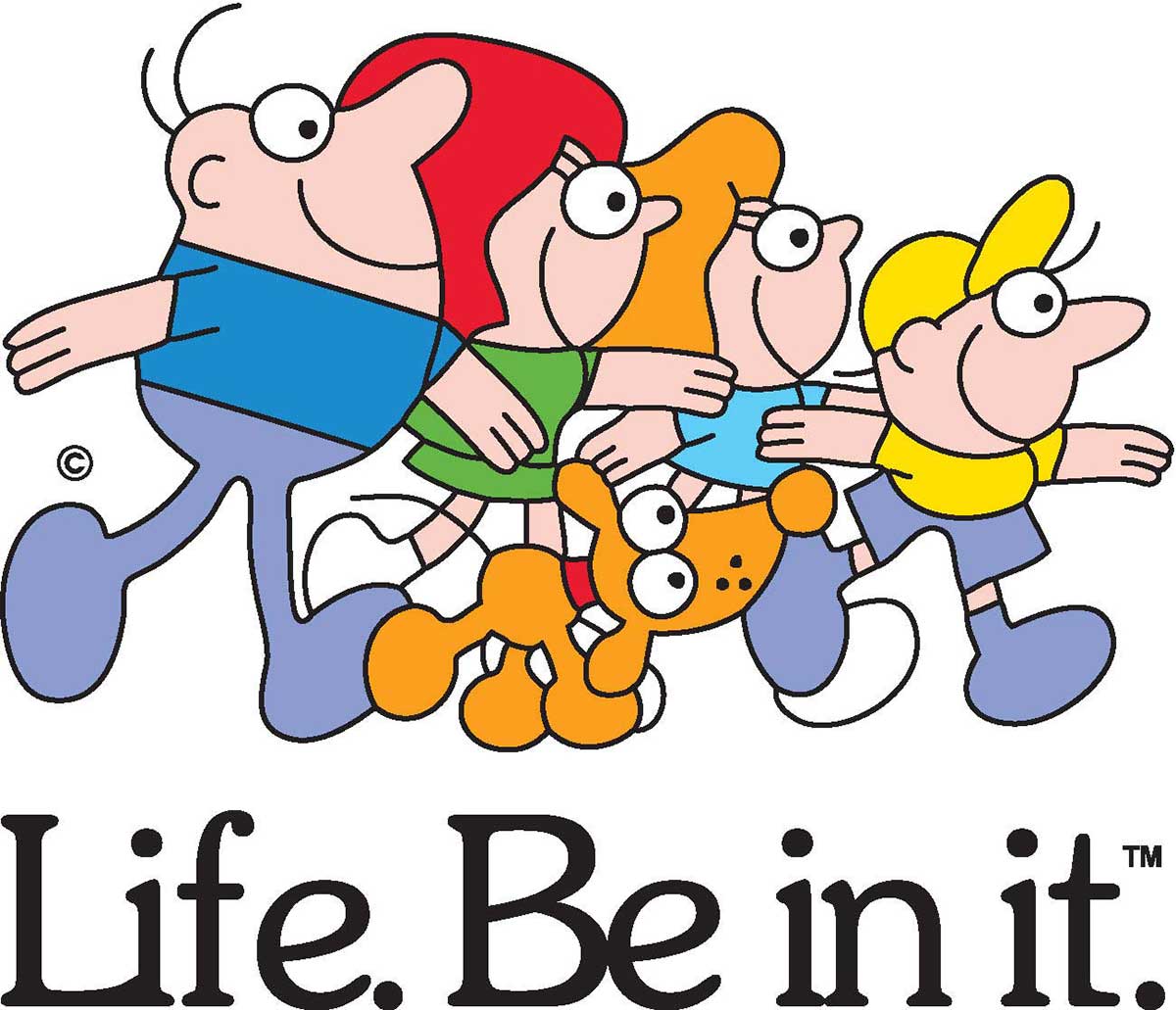 ‘Life. Be in it.’ was the slogan for what became one of best-known health promotions in Australian history. The campaign aimed to increase physical activity and general wellbeing among Australians, and encourage them to take control of their health.

The whole idea of the ‘Life. Be in it.’ campaign is to teach us how to behave, what to eat and drink and how to spend our time if we want to have life and have it more abundantly.

The first International Conference on Health Promotion, organised by the World Health Organization, was held in Ottawa, Canada, on 21 November 1986.

At this conference the Ottawa Charter on Health Promotion was signed. It defined health promotion as ‘the process of enabling people to increase control over, and to improve, their health’.

Health promotion campaigns aim to encourage the public to adopt good health practices and to avoid ones that lead to ill-health.

Such campaigns were a response to former efforts that had focused only on individuals and groups who were already classed as being at-risk for certain illnesses and diseases. They were also an attempt to avoid late intervention.

‘Life. Be in it.’ was a Victorian Government health initiative launched in 1975 by the Department of Youth, Sport and Recreation, with support from the federal government.

It aimed to educate the Australian public about exercise in a fun and non-threatening manner.

In 1977 the State Minister for Youth, Sport and Recreation, Brian Dixon, claimed that 97 per cent of Victorians were aware of the campaign, 47 per cent were thinking about becoming more active and 35 per cent had become more active.

The campaign’s great success in Victoria prompted the federal government to roll it out across the country in 1978.

As an Age article with the headline ‘Bewdy Norm, you’re national’ put it on 10 September 1977:

Victoria is not big enough for barrel-bellied Norm, the all-round sportsman. So Norm is going to spread his considerable talent as the star of the ‘Life. Be in it.’ cartoon commercials across the nation.

Recreation Ministers from all States, Territories and the Federal Government yesterday flew to Sydney to toast his success.

The central cartoon character of the campaign was Norm, so-named to signal his status as an everyday Australian. Norm was a ‘lethargic, beer-bellied, middle-aged couch potato, more interested in watching telly than doing formal exercise’.

It was hoped that viewers who associated any kind of physical activity with too much effort or difficulty would identify with Norm. Over the course of the campaign, Norm promoted the inclusion of daily exercise into his ‘normal’ routine, which increased his fitness and wellbeing with little effort. 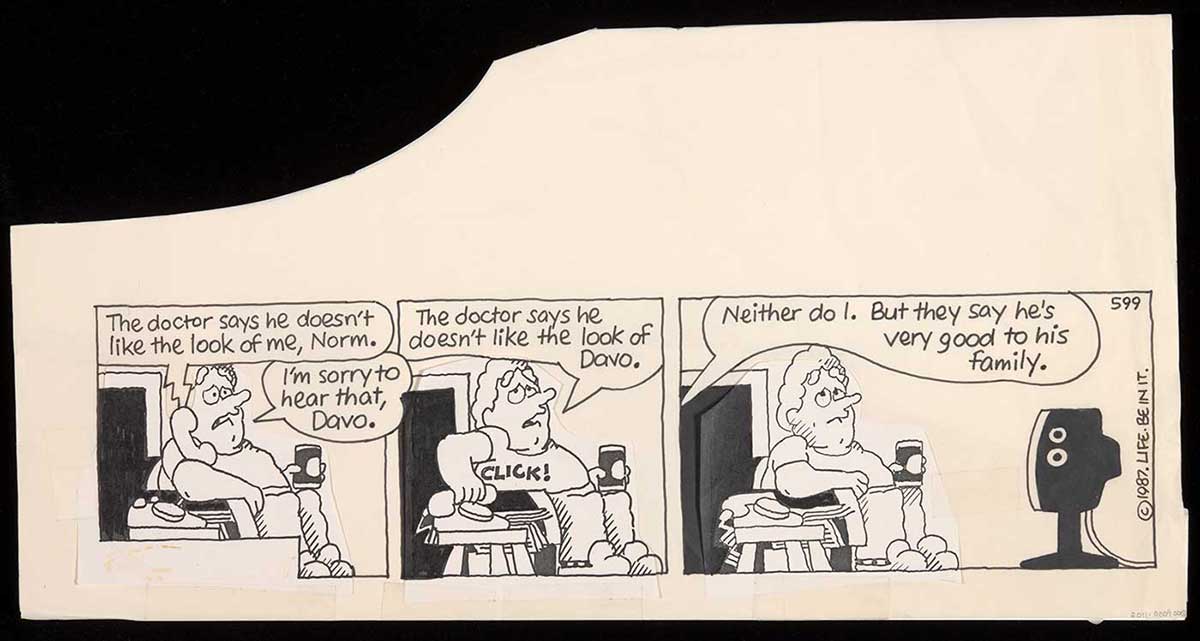 ‘Life. Be in it.’ comic strip featuring Norm, the archetypical couch potato

The success of the ‘Life. Be in it.’ campaign was largely due to the close collaboration between advertising executive Phillip Adams and graphic designer Alexander Stitt in 1975.

Adams, now a well-known broadcaster and columnist, had started his career in advertising with Briggs & James, and later became a partner in Brian Monahan and Lyle Dayman’s agency.

‘Siddown,’ he said, offering me a gold-tipped Sobraine Black Russian. ‘Brian Dixon, the Minister for Youth, Sport, and Recreation, saw some German fitness campaign while he was away and now he wants to do one here, a community service campaign to get people fit.

We did some research and if we get it right, it might work.’ He tossed a book-thick document across the desk. ‘I’ve called it “Life. Be in it”. We need a family – an animated family, I told Dicko, to get rid of any class stuff and age groups problems. What do you think?’

A report released in 1979 evaluated the program. It used a sample size of 3,960 respondents drawn from the capital city and two regional cities in each state, and proportional representation from the Australian Capital Territory and the Northern Territory.

‘Life. Be in it.’ lost federal funding in 1981 as health promotion gained momentum and larger, more elite programs were developed. It was subsequently registered as an incorporated company and worked in partnership with other health organisations, including the National Heart Foundation.

Life. Be in it. World Cricket T-shirtA yellow cotton t-shirt with a round collar. The t-shirt has a coloured print design on the front of a cartoon character holding a can. There is also text on the front of the t-shirt that is purple and black in colour that reads 'World Cricket / I'm here / till stumps! / Life. Be in it TM / A LICENSED PRODUCT OF FITWEAR LDT. '
Topics
Places
Curriculum subjects
Year levels