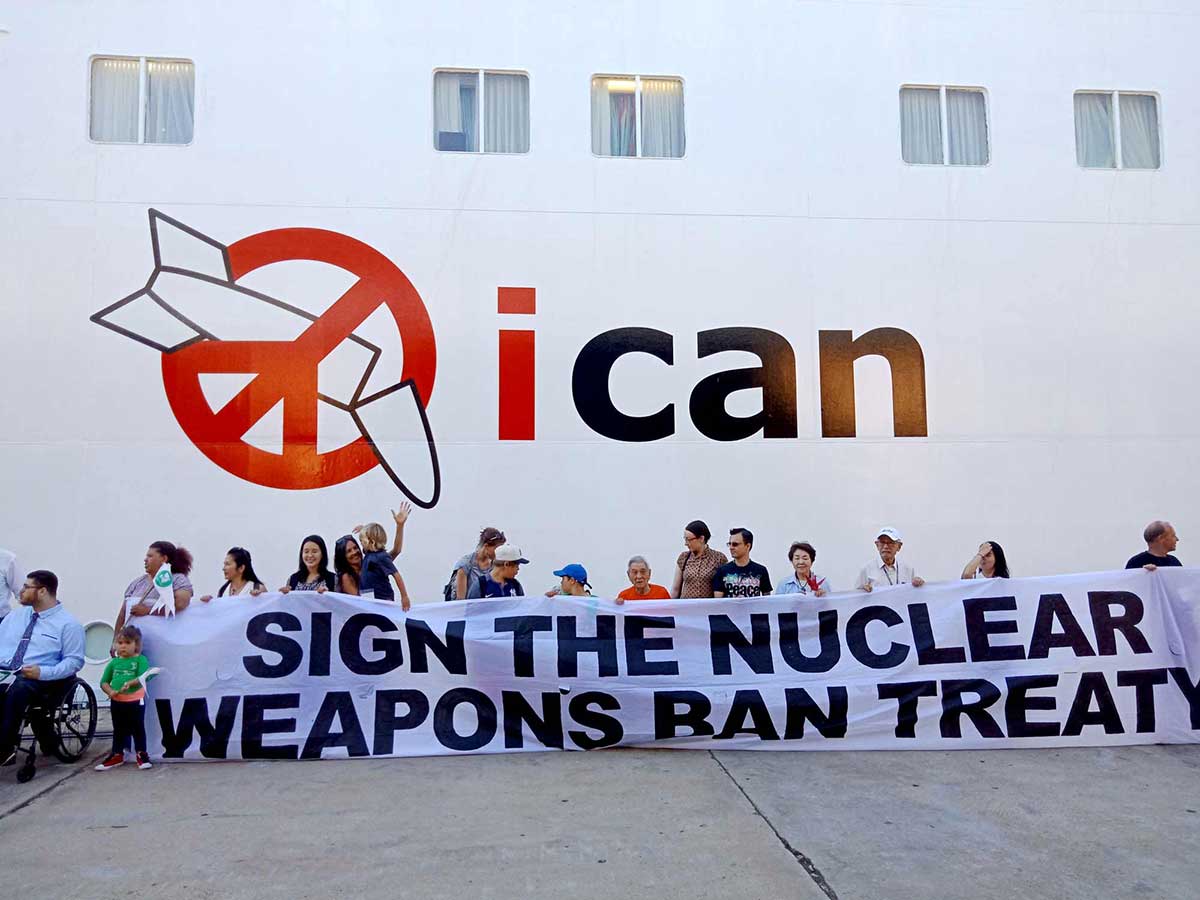 The International Campaign to Abolish Nuclear Weapons (ICAN) was first launched in Melbourne in 2007. Its aim was to promote the cause of nuclear disarmament.

In 2017 ICAN was awarded a Nobel Peace Prize for its ‘ground-breaking efforts’ to promote adherence to, and implementation of, the UN Treaty on the Prohibition of Nuclear Weapons (July 2017).

We need a determined worldwide movement to outlaw and abolish nukes. To get there in this generation, we need to build the wave of public opinion into a mighty crescendo: a massive, surging, irresistible force which carries us all the way to absolutely zero nukes. Without it, even the most inspirational of leaders will falter on the way.

The first nuclear explosion was in July 1945 when the United States tested its first atomic bomb in the state of New Mexico. Three weeks later, in early August 1945, atomic bombs were dropped on the Japanese cities of Hiroshima and Nagasaki in an effort to end the Second World War.

Nuclear weapons have posed a threat to the world ever since.

Sixteen years after the Hiroshima and Nagasaki bombings the United Nations called for a treaty to combat the spread of nuclear weapons. This action prompted widespread international concern about the threat posed by nuclear weapons.

In July 1968 the Treaty on the Non-Proliferation of Nuclear Weapons was opened for signature. This landmark international treaty aimed to prevent the spread of nuclear weapons and technologies and to promote peaceful cooperation in the use of nuclear energy.

The treaty, implemented by 1970, was extended indefinitely on 11 May 1995. In all, 191 countries joined the treaty, including the five nuclear-weapons nations (United States of America, Russia, United Kingdom, France and China). 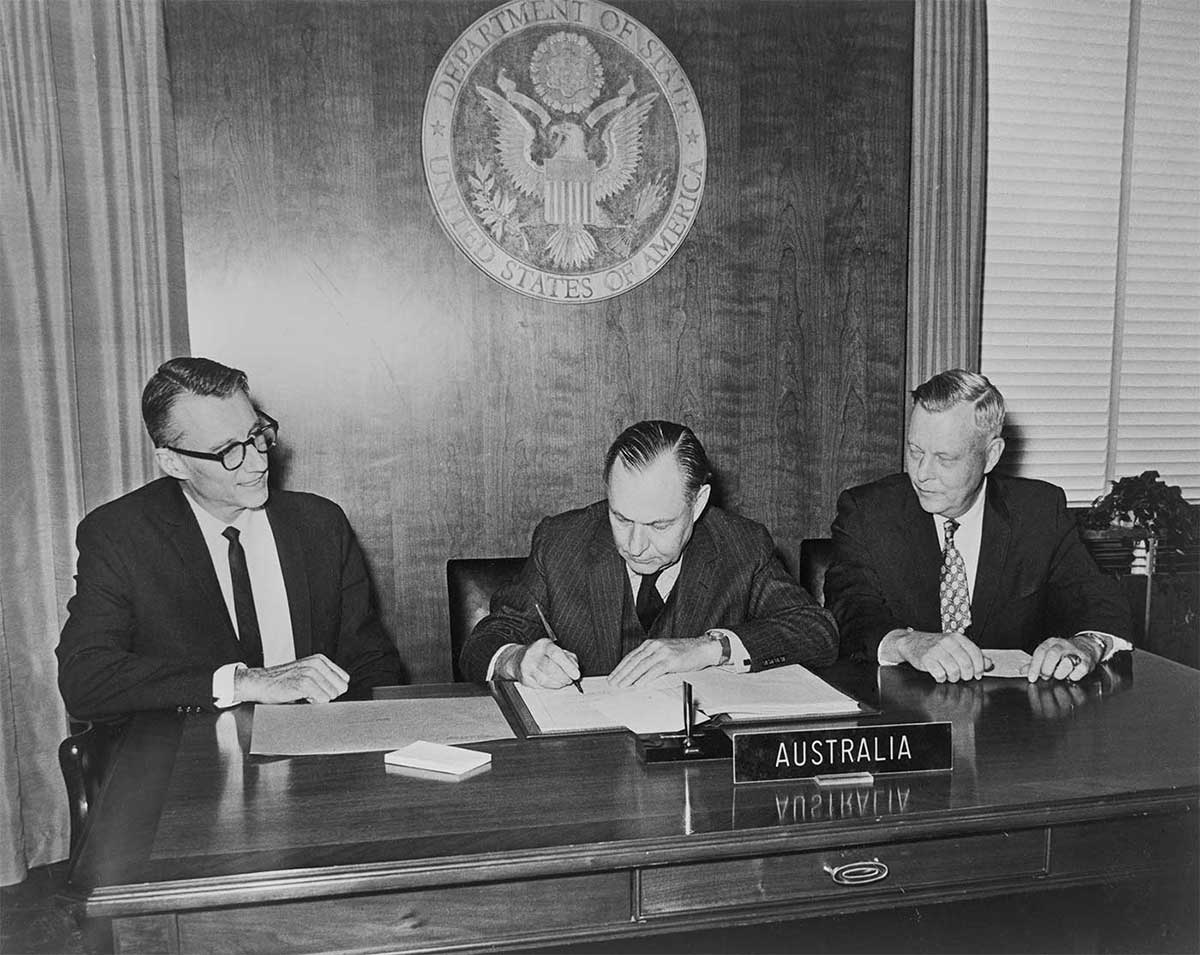 The Nuclear Non-Proliferation Treaty is the only binding commitment for the purpose of nuclear disarmament. It has been agreed to by more countries than any other disarmament agreement in history.

The Nuclear Disarmament Party was formed in June 1984 in Australia. It was founded by Michael Denborough, a medical researcher, as the political arm of the Australian anti-nuclear movement.

The International Campaign to Abolish Nuclear Weapons (ICAN) was launched in Melbourne in April 2007 to promote the cause of nuclear disarmament.

The idea of ICAN was first proposed by Ron McCoy, a Melbourne-based obstetrician and former co-president of International Physicians for the Prevention of Nuclear War (IPPNW).

He first suggested the idea through the IPPNW network. At its 17th world congress in 2006 in Helsinki the IPPNW adopted ICAN as a priority action. By 2007 ICAN had set up its first office in Melbourne.

What developed was a coalition of multiple and diverse partner organisations around the world working towards a clear objective, which was a ‘comprehensive, binding treaty to prohibit nuclear weapons and provide for their elimination’.

Key factors that informed the development of ICAN were the need to be global, to engage young people and to firmly advocate the unacceptability of nuclear weapons.

In 2011 ICAN, with the support of a grant from the Norwegian Government, established an office in Geneva, in order to head up an international workforce.

ICAN is now a coalition made up of non-governmental organisations from over 100 countries.

Treaty on the Prohibition of Nuclear Weapons

In 2016 ICAN successfully advocated for a special UN working group on nuclear disarmament and campaigned for the UN General Assembly’s resolution to undertake negotiations on a treaty for the purpose of prohibiting nuclear weapons.

ICAN was an active participant in the treaty negotiations process.

It has been argued that the Treaty on the Prohibition of Nuclear Weapons has polarised the international community because it is underpinned by a principle of immediate prohibition.

The Treaty on the Prohibition of Nuclear Weapons will only come into effect after 50 countries ratify it. At the end of 2019 there were 80 signatories, but only 34 countries had ratified the treaty. Australia has not signed the treaty.

At a ceremony held in Oslo on 10 December 2017 ICAN was awarded a Nobel Peace Prize. The prize was awarded:

for its work to draw attention to the catastrophic humanitarian consequences of any use of nuclear weapons and for its ground-breaking efforts to achieve a treaty-based prohibition of such weapons.

At the ceremony Beatrice Fihn, Executive Director of ICAN, proclaimed:

We are a movement for rationality. For democracy. For freedom from fear. We are campaigners from 468 organisations who are working to safeguard the future, and we are representative of the moral majority: the billions of people who choose life over death, who together will see the end of nuclear weapons.

ICAN’s receipt of the Nobel Peace Prize demonstrates, among other things, leadership among some Australian communities in the international disarmament movement. 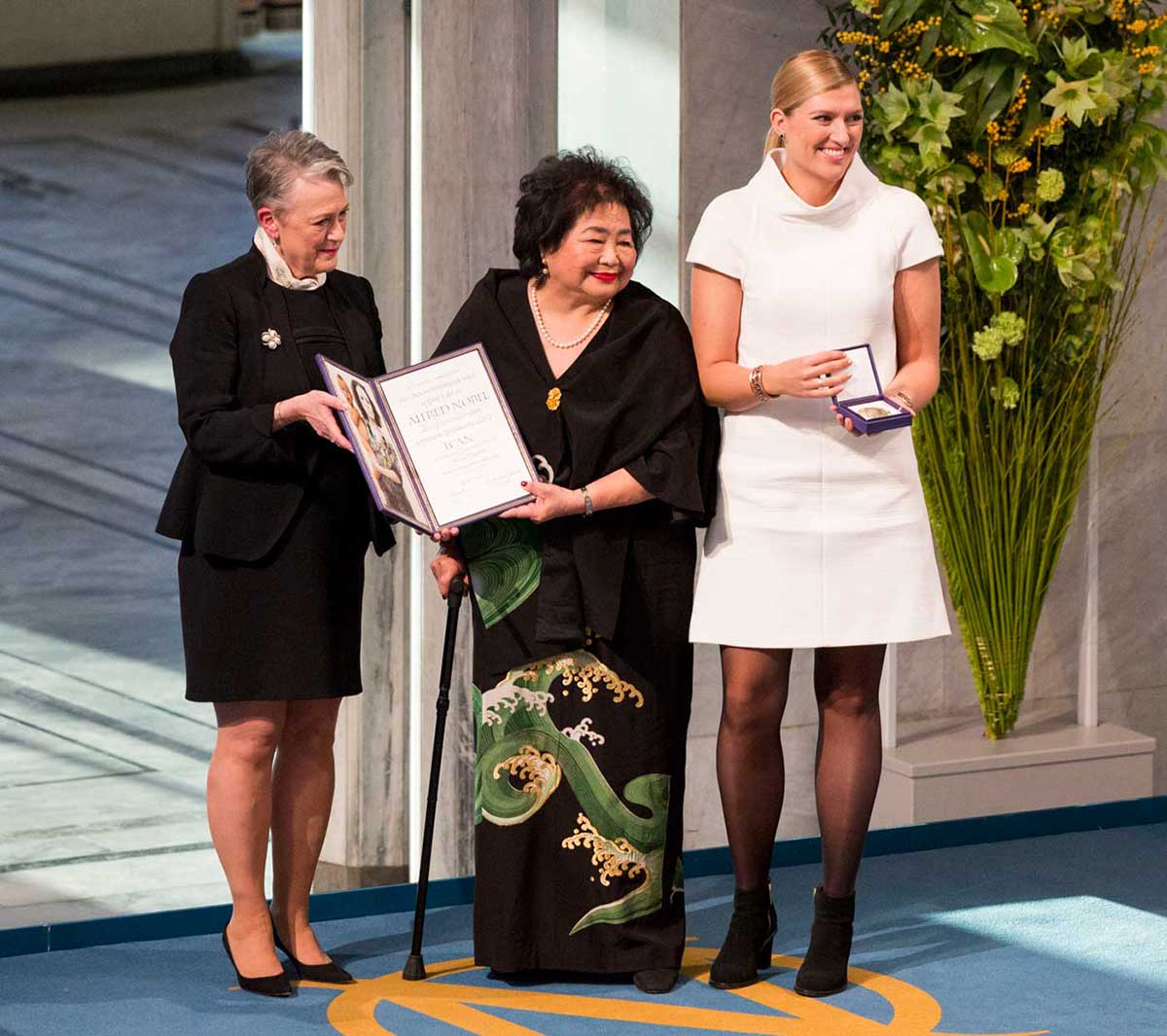 Beatrice Fihn and Setsuko Thurlow being presented with the Nobel Peace Prize for ICAN, 10 December 2017

ICAN is still active. The organisation continues to strive to enforce the Treaty on the Prohibition of Nuclear Weapons, in part by working with more than 540 partner organisations.

ICAN’s Australian office advocates for Australia to sign and ratify the Treaty on the Prohibition of Nuclear Weapons. It is independent, non-partisan and funded by donations from its community of supporters.

John Carlson, ‘Is the NPT still relevant? – How to progress the NPT’s disarmament provisions’, Journal for Peace and Disarmament, vol. 2, no. 1, April 2019

Tilman Ruff and Dimity Hawkins, ‘How Melbourne activists launched a campaign for nuclear disarmament and won a Nobel prize’, The Conversation, 9 October 2017

Ramesh Thakur, ‘Instead of congratulating ICAN on its Nobel Peace Prize, Australia is resisting efforts to ban the bomb’, The Conversation, 14 December 2017